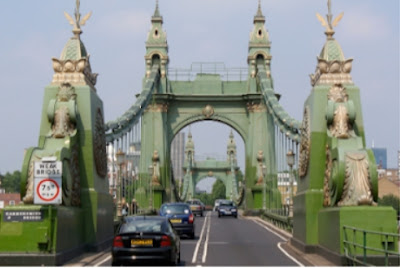 Yesterday we left Hammersmith Bridge with a 7.5 tonne weight limit after a long running saga of inspections, repairs and failure to repair. This meant that some double deck bus routed had to be converted to single deck.
fbb has attempted top unravel the on-going saga, but has found it complex and difficult to follow; one problem being that the press are wont to add any old picture of the bridge to their reports whether it is the correct one or not.
But here's the old man's attempt!
Next comes a move to one-bus-in-steam on the bridge with traffic light control and width restrictions for all other vehicles - effectively cars only but buses heavily restricted.

The cracks are tiny but growing and growing a bit faster in a summer heatwave. Diagrams are published showing where the cracks have appeared. 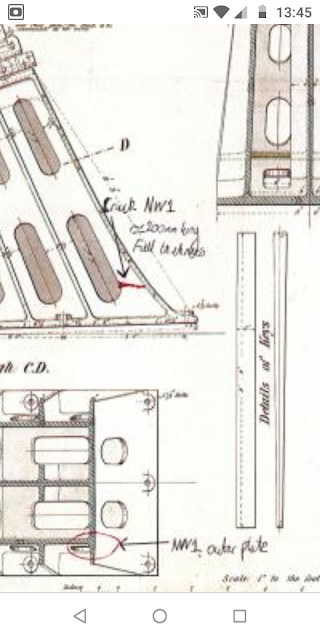 Thus it is that the bridge is then closed to ALL motorised vehicles but remains open for pedestrians and cyclists. 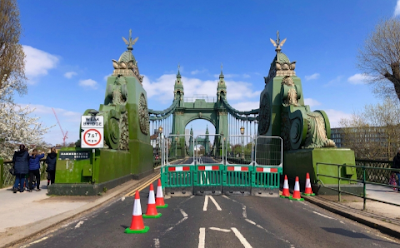 To most people's surprise, the Hammersmith and Fulham Council then received more "expert" advice ... 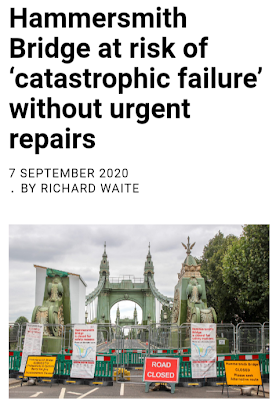 ... so the bridge closed to even pedestrians and cyclists. River traffic is banned from passing underneath and the two "tow paths" the pass under the bridge ... 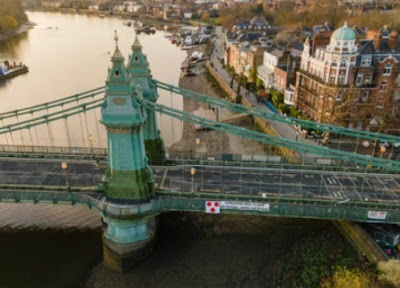 ... are also closed, thus depriving Londoners and visitors alike of the full pleasure of Thamesside saunters.
With the bridge totally closed bus routes have had to be changed completely. It was bad enough when pedestrians were still allowed to traverse the apparently rickety structure ... 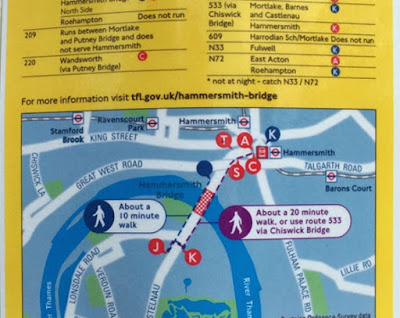 ... but now there is no way over for people and/or pedal power. Protests have grown ... 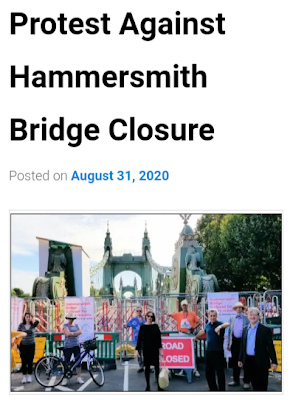 ... because the inconvenience is significant. Bus 533 takes a circuitous route via Chiswick Bridge ... 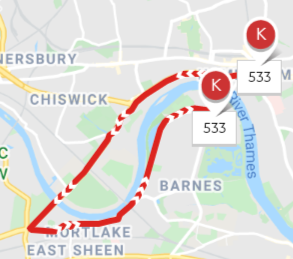 ... and, as usual, Transport for London's information is less than helpful showing the bus as running from stop K to stop K (confusing) and implying that you can only get from Hammersmith to Barnes and not back again. OK, only a complete wally would be totally flummoxed by this, but that is no excuse for poor quality maps.
Mike Harris (as ever) gets it right ... 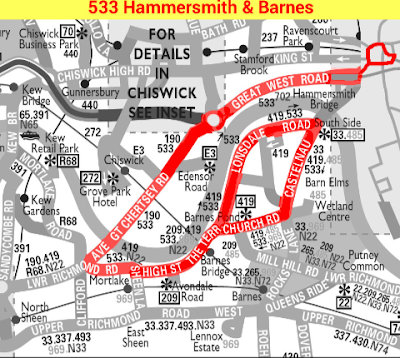 ... showing a large loop via Lonsdale Road (remember?) and Castlenau before joing the outward route at Barnes Bridge station.
TfL does not bother with timetables, but even the departure list is unhelpful.

It tells you that the first bus is at 0448 and then lists it as 0450. And what do harassed Hammersmithians make of "every 9 to 12 minutes". And, as usual, if your were hoping for an onward journey from Barnes, you have no idea how long the 533 tour will last.
As usual Robert Munster rides in on his white horse of common sense to proivide us with a proper timetable ...

... yet again breaking the TfL code of secrecy. 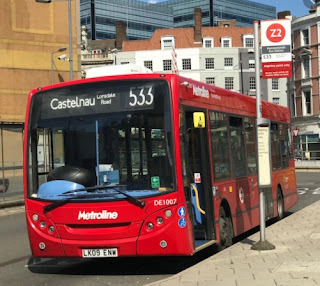 To add to the passenger's troubles, TfL is not averse to heaping further difficulties on to the weary heads of passengers seeking to cross the Thames at or near Hammersmith.
When Diamond Geezer (blogger superb) visited the wondrous Hammersmith bus station in the first stages of bus 533, he found no information whatsoever except a harassed TfL person in hi-vis vest attempting to inform the utterly confused using just one sheet of photocopied information.  She failed most of the time.
Whilst there, he noticed an intriguing bus stop flag. 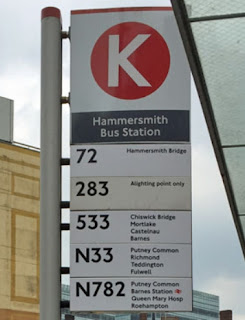 It shows route N (for night) 782 which does not exist, never has existed and never will exist. Numbers in the 7xx series were for Green Line express routes
Have things got better? Roger French visited the Castlenau bus stops a couple of weeks ago whilst investigate another badly publicised route in the area and discovered ... 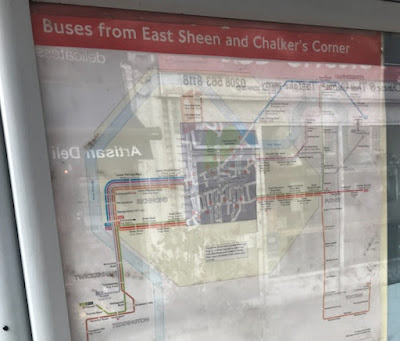 ... a spider map for buses from East Sheen, which is a frantic jog  between Castlenau (map below, road junction top right) ... 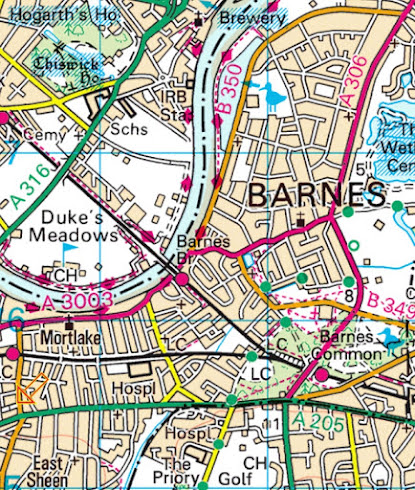 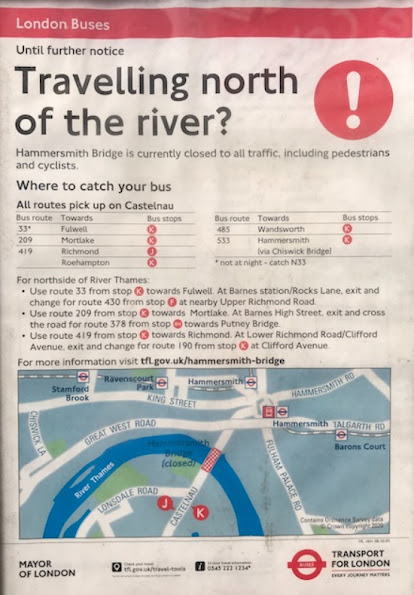 ... which did appear to give up-to-date information but accompanied by a complete lack of timetables (not even departure lists) and, of course, no map.
Beyond belief!
But Hammersmith Bridge MAY be falling down (not all experts agree with the doomwatch reports) so what is being done to put it right?
Ah, Hammnersmith, we have a problem!
Shoreline At Scarborough

Always anxious to be even handed in his blogging, fbb needs to remind his readers that there has been competition on the Scarborough sea front service for many years. At one stage this was very aggressive but latterly a friendly (?) agreement has been brokered to share the business.
Shoreline use second-hand buses usually in a blue and yellow livery ... 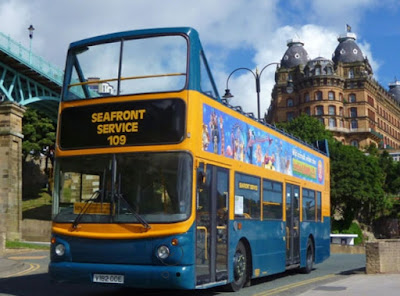 ... this one formerly trundling around London for Transdev. 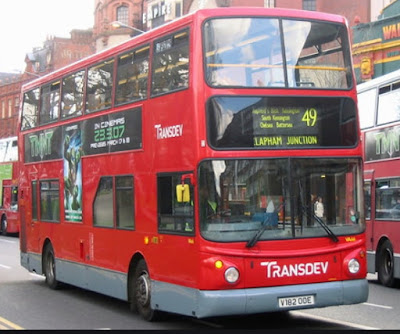 A recent arrival is not blue and yellow ... 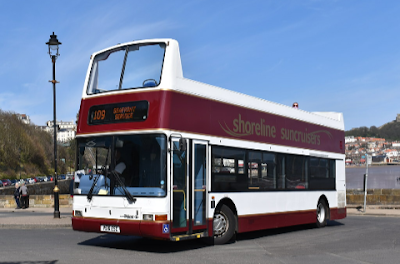 ... but its paint job is familiar. The bus began life as part of the huge tour business in Edinburgh wearing two liveries ... 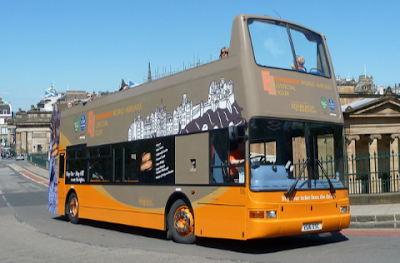 ... including this for the generic city tour. 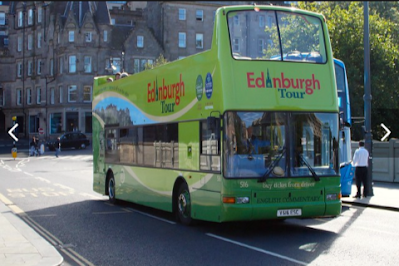 It ended up, still with Lothian Regional Transport, in "traditional" madder and off-white garb. 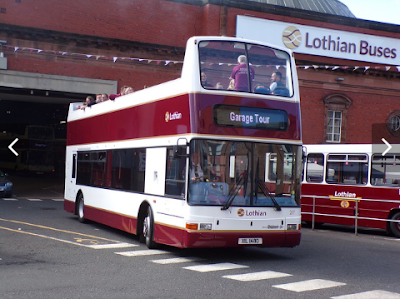 It is these colours that shoreline have retained.
fbb did try to see if Shoreline were matching East Yorkshire's route extended further north to the Sea Life Centre.
The Shireline web site says a timetable is "coming soon" ...

... but does imply the original route. The photo is taken, as usual, at the Spa turning circle.
Brand Awareness

Remember this Company? fbb often remarks about branding, but Consignia was universally accepted as an utter disaster. It was introduced with many fanfares as "the new name for The Post Office". More or less everybody laughed derisively and the name was very quickly dropped.
So what would our readers make of ...

... which, so its proponents propone, is pronounced "Aberdeen"? Of course it is.

So that explains it!

So you have guessed correctly (??!!!). It is a brand of insurers and investment operators Standard Life. Obvious isn't it? 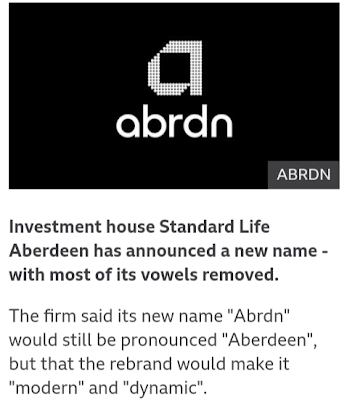