Heard about Happenings in Huddersfield (1)

A Hasty History of Huddersfield 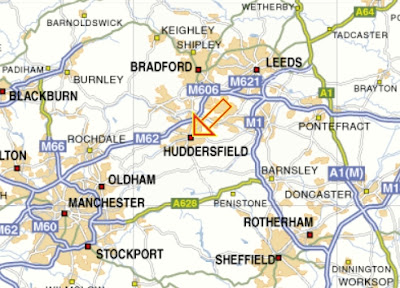 The first railway line to cross the barrier of the Pennines from Lancashire to Yorkshire was the Manchester & Leeds Railway, which opened in 1841. The line followed the Upper Calder Valley, passing through Todmorden and Hebden Bridge before turning north at Normanton to reach Leeds. Normanton.
For those less familiar with the geography of t'Noorth, think of the line as following very roughly the M62.
Major towns and cities such as Bradford, Dewsbury, Halifax and Huddersfield were bypassed.
The Huddersfield and Sheffield Junction Railway (H&SJR) was formed to build a line between Penistone and Huddersfield, and intended to join the Huddersfield & Manchester Railway (H&MR). After discussions between the two companies, they agreed to shared ownership of the line from that junction to the a proposed jointly owned railway station. 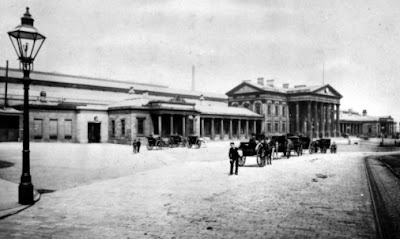 The outcome of this unusual agreement was the building of a railway station on an unprecedented scale to a design commissioned from York-based architect J.P. Pritchett. The builder was Joseph Kaye. When it was suggested that an inscription be added to the front of the station to name the builder, Kaye reportedly replied "the work itself would be the best record of my name".

The foundation stone of the station was laid on 9 October 1846 by Earl Fitzwilliam and a public holiday was declared, with church bells ringing from dawn to dusk.

By completion in 1850, he H&SJR had become part of the Lancashire & Yorkshire Railway and the H&MR had been acquired by the London & North Western Railway. The booking offices for each company were situated at the the ends of the station's grand façade and are adorned with the crests of the L&YR (left) ... 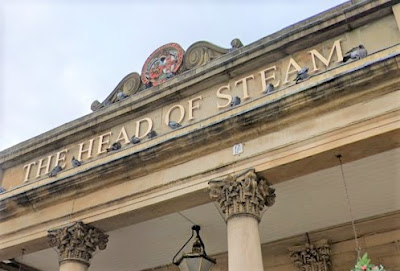 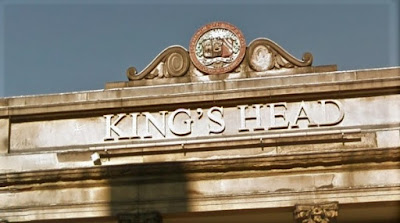 Both offices later became public houses.
And So To Today
It was reports locally that Huddersfield Station was to be "rebuilt and extended" that interested fbb. So, before we can try to understand what will happen, we need to explore the station today. Here is a section of a current Saturday departure list which will from a framework for or explanation. 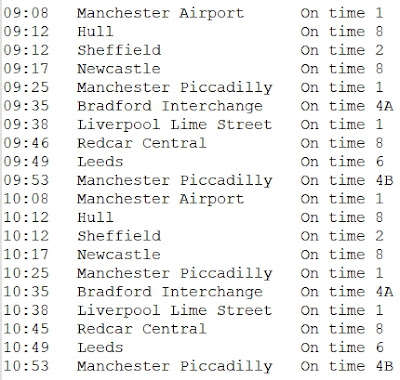 As you can see, the cycle of ten departures repeats every hour.
First, then. we enter the station and gaze leftwards. 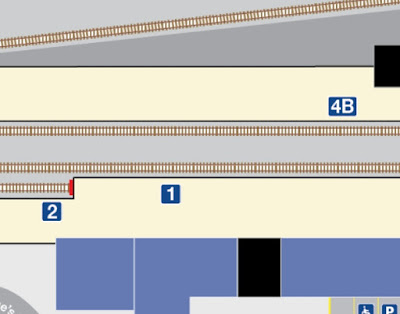 We will be standing on Platform 1 which carries the through First Trans-Penning Express service to Liverpool, Manchester and Manchester Airport; currently three trains every hour. 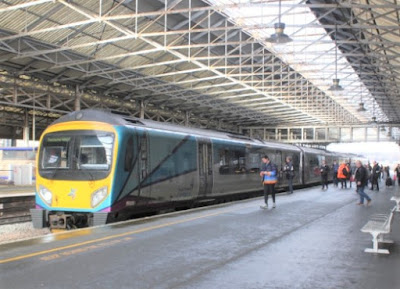 Turn sharp left and you will espy Platform 2 for the trains to Penistone and Sheffield. 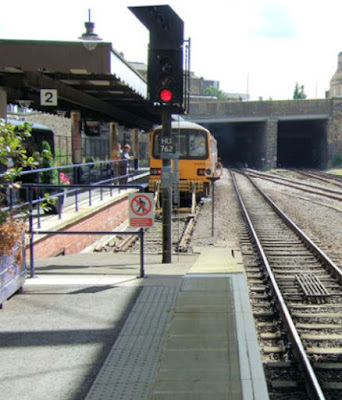 We tend to forget that this service was planned to be the country's first "Tram Train" route; but the various parties chickened out in favour of the little used Sheffield to Rotherham Parkgate service. This is such a pity as the Penistone line would have been ideal for a German-style inter-urban tram with an enhanced frequency.
Across the tracks is Platform 4B. Platform 4 is a through line, but generally is operated as two bays. 4B accommodates the hourly stopping trains to Manchester. 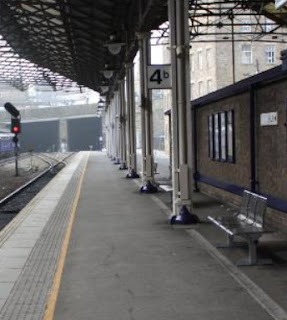 Turning through 180 degress we can gaze at Platform 4A ... 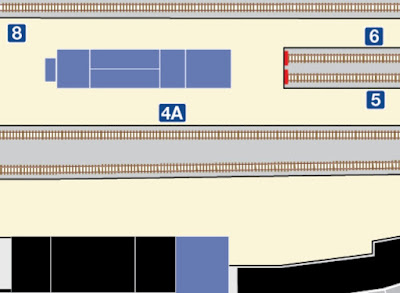 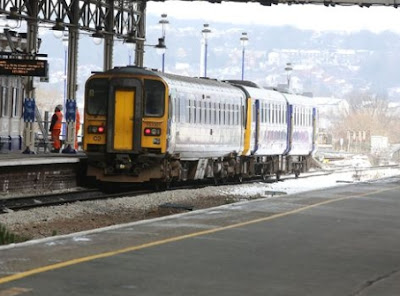 Just beyond the Bradford train in the picture above are two bay platforms. 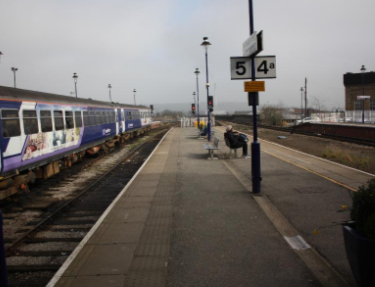 No 5 is not used for the 10 train cycle listed above, so we move over to Bay 6 and through platform 8. 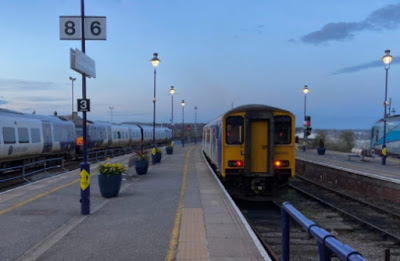 No 6 houses the hourly stopper to Leeds whilst No 8, somewhat offset from the rest of the station ... 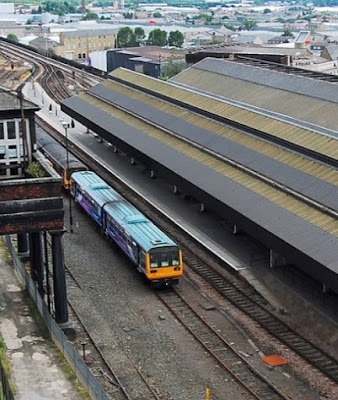 ... is served by the three trains an hour Trans Pennine expresses to Leeds and beyond to Newcastle and Middlesbrough, the latter continuing to Redcar. The trains in the above (out of date) picture are parked in a carriage siding whilst the buildings on the left are part of a splendid goods warehouse. 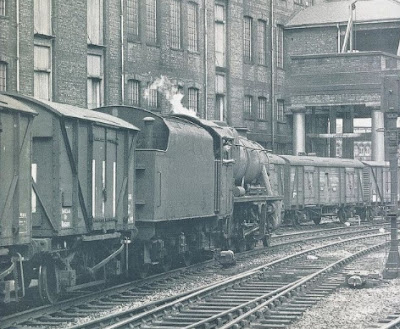 The structure spanning the track is a good wagon lift.
It should be noted that some of the train services referred to are running at reduced frequency and only time will tell how much returns as we begin to escape from house arrest.
The "missing" platform 3 is, fbb guesses, next to Platform 2 and houses a community facility in an old coach. 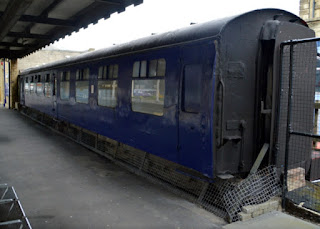 Platform 7 may well have been the Manchester facing bay between 4b and 8. 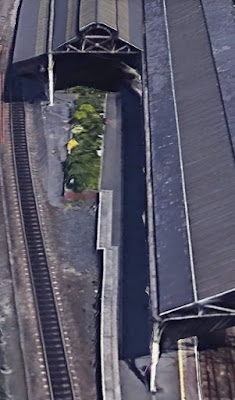 As fbb said in a previous blog, the main station buildings are very splendid indeed but once on the platforms the ambience is, frankly disappointing.
But perhaps the up-coming developments will improve things. Tomorrow's blog reveals all!
Puzzle Picture 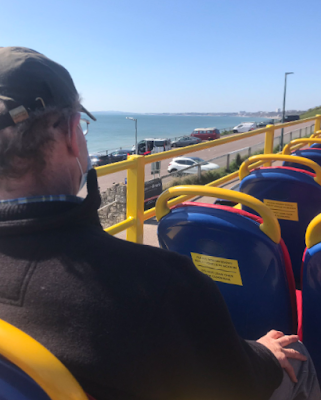 The open topper was at Bournemouth where two routes have been running since Easter.
11 Bournemouth to Mudeford (every 2 hours) 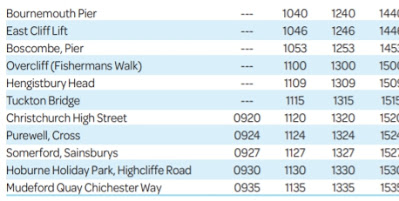 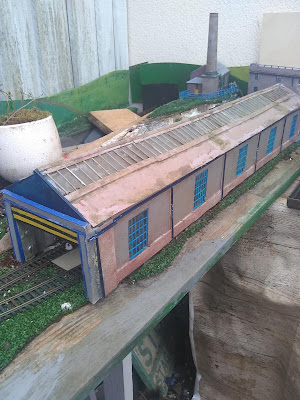 This edifice has, yesterday, gained gutters and downpipes which revealed another problem for fbb to solve. The roof is slightly bowed and therefore does not quite fit on the walls. Another bodge is in the offing!
Ecclesiastical Nostalgia 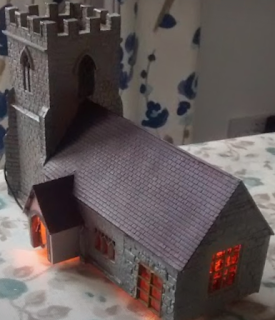 Peterville Church was first illuminated in 2015 - but the wiring rusted away. Note that the East Window was fitted with stained glass ... 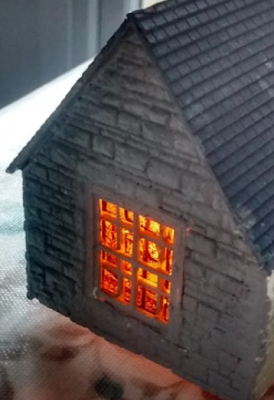 ... but the printer ink colours faded quickly. fbb is awaiting inspiration for a more lasting way to stain-glaze for a less transitory effect.
Infrastructure Failure 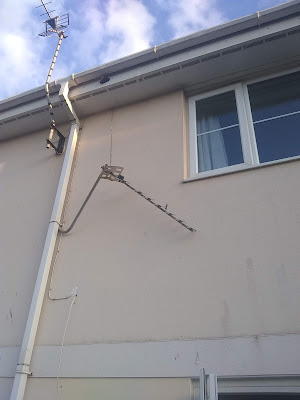 Real life follows the models? Yesterday the fbb's analogue TV aerial fell off! The bracket had simply rotted away! Because fbb mansions is in visual sight of the transmitter at Stockland Hill ...

... reception of the main channels on the upstairs tellies is unimpaired.
Ornithological Opportunities
The picture is captioned, "Ready chaps; lockdown has ended"! 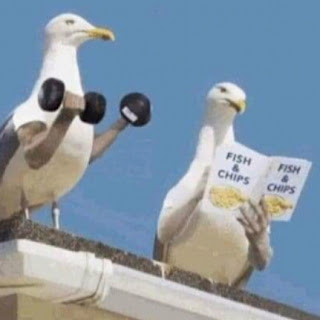 From an twitterer.
Next Huddersfield blog : Thuyrsday 15th April
Posted by fatbusbloke at 02:00