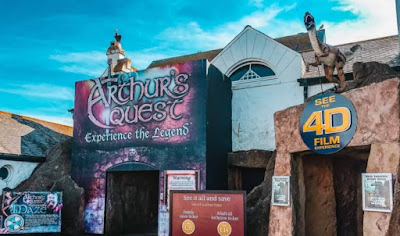 ... where you can enjoy the rich coastal heritage of the Cornwall peninsula and relish the experience of quaint Cornish shopping street. 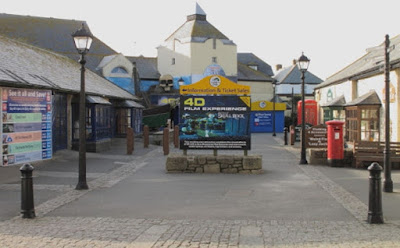 And you can get there by bus, stopping right outside the attractions!
A Lizard P.S.
It would seem that Open Top buses are something of a craze for this summer. At least one article on-line has suggested that Joe Public will be so desperate to enjoy the outdoors after Boris "removes all restrictions for ever" (yeah, right!), that there will be a great flocking to ride on a bus to see the sights; and a willingness to pay "rip-off" (sorry, "attractive") prices.
fbb mentioned the Coastal Clipper services centred on Great Yarmouth ... 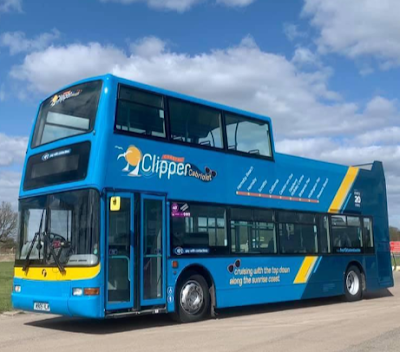 ... where you will be invited to ride on the "Cabriolet" buses.
A twittery tease has appeared showing a Coastliner bus heavily branded for the gorgeous covered ride to Whitby  ...

Transdev has also announced their 'most frequent" bus service on the Yorkshire Coastliner network ... 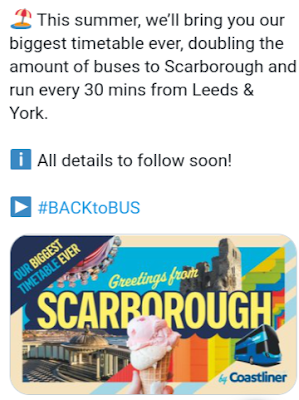 ... although the actual timetable has yet to appear.
Meanwhile Bluestar and/or More are de-lidding their open toppers for the Breezer Season ... 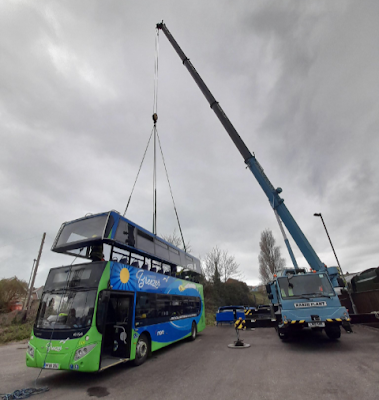 ... and screwing on the bits needed to comply with regulations. 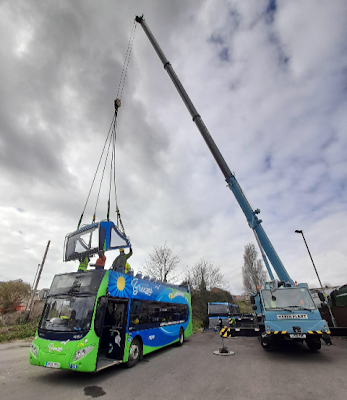 Whilst Kernow's Exeter outstation has been "filming" on Dartmoor. 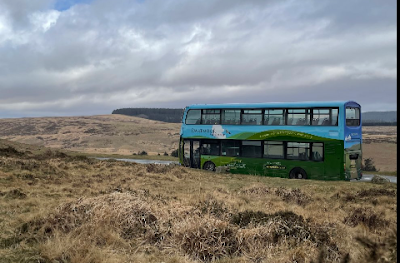 And we know that First Kernow is planning something very different for its L1 to Lizard,

If the green amphibian extracts business from the Transport for Cornwall 34, you might expect the Council to be very dis-chuffed indeed. The piggy bank may suffer badly from their headlong dash into a two tier system for buses in the county!
Bus watchers reckon First Kernow will have 30 open toppers offering rides all the way from Somerset (Minehead) via Exeter and Dartmoor and on to the Atlantic Coast and the pointy bits.
There will be a certain amount of angst at management and board room level hoping that
(a) the weather will be kind
(b) the customers will pay - and
(c) the bean counters have got their sums right
Back to Finis Terre!
Sounds more appealing than "Lands End"!
If we go to the County's site (Go Cornwall - i.e. Go Ahead's site) we will find plenty of buses around ... 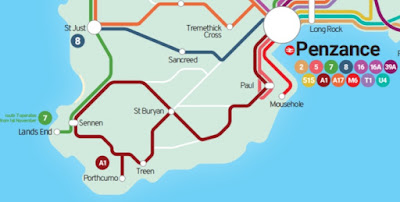 ... but blog readers will have been forewarned that all is not as it seems. Here, for example is the County's A1 from Penzance ... 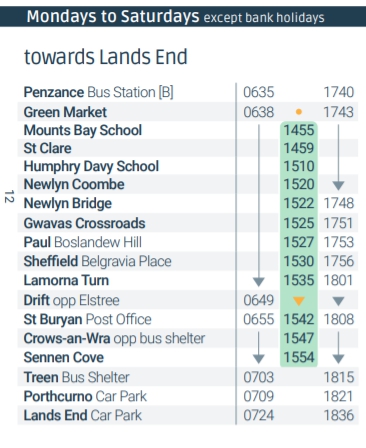 ... not much incentive, then to lave the car in the hotel car park? But, if we then turn to the second network of Cornwall's "one integrated bus service" ... 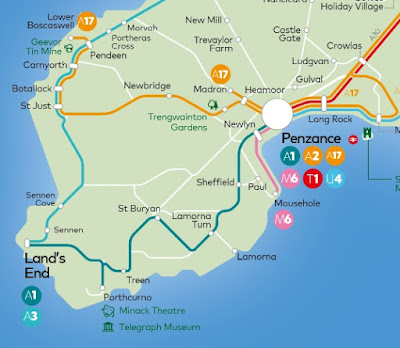 ... we find the former Atlantic Coasters, soon to be Lands End Coasters A1, A3 and A17. A1 and A3 link with the St Ives end of A17 to form a mega circular, currently limited in scope, but due for its summer expansion soon. 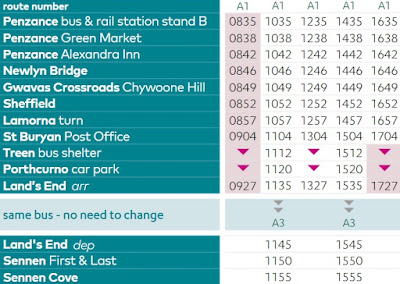 But First's map does show several locations further south than Lands End, even on this little network! So maybe Marc Morgan Huws' picture of his southernmost stop ... 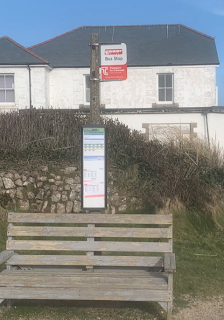 ... is at Porthcurno. It is a double run. turning at the village car park ... 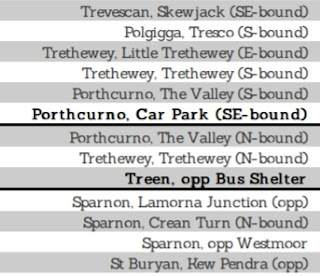 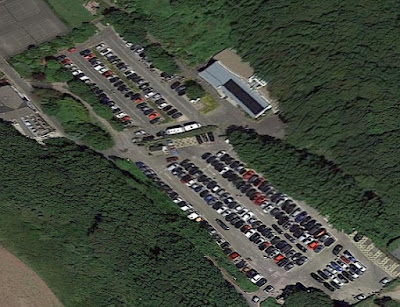 Almost certainly the above; as access further south is prohibited for PCVs! 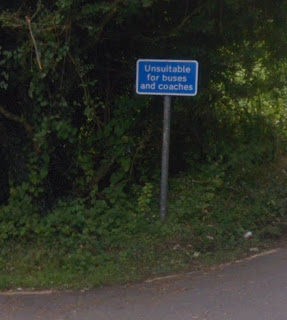 Down various narrow lanes is the sea, the beach and the wonderful Minack Theatre. 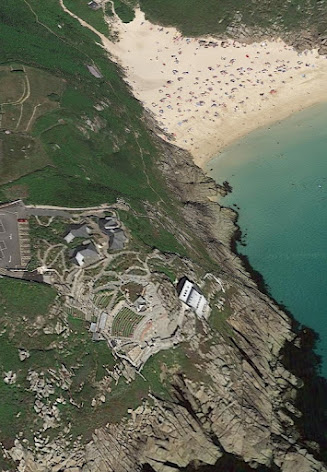 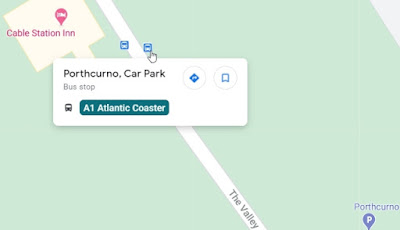 ... close to the Cable Station Inn. 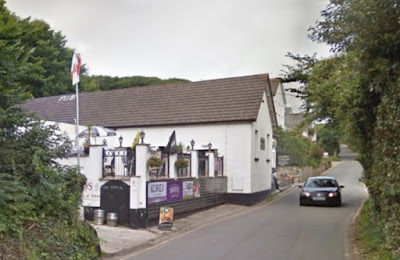 Alas, there are no stops, poles, flags or timetable frames visible at the roadside, but maybe the undiscovered picture is INSIDE the curtilage of the car park - sadly unvisited by the Streetview Noddy Car!
If it is, then this is indeed the most southerly point served by a normal bus service, leaving the current First L1 to be classed as a school or college run.
But, wherever the errant stop may be, do pop into the Cable Station Inn to enjoy a glass of ... 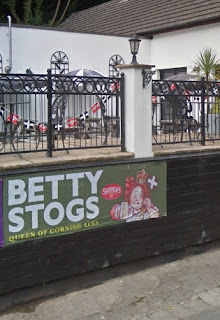 ... Betty Stogs.
In Cornish folklore Betty Stogs was reputedly full-bodied, golden-hearted and just a little fruity. So you can see why we chose to name our award-winning, smooth-drinking amber ale after her. Especially as both Bettys are often to be found at the centre of a good party. Join us in raising a glass to Betty Stogs – truly the Queen of Cornish ales.
Or, even better, visit the Cable Hut itself ... 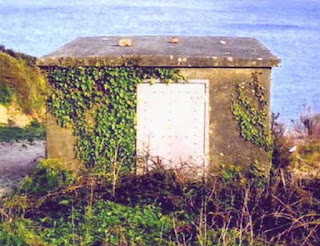 ... all explained in the Cable Station museum.
One thing IS certain. There will be oddles of open top buses to enjoy this summer. 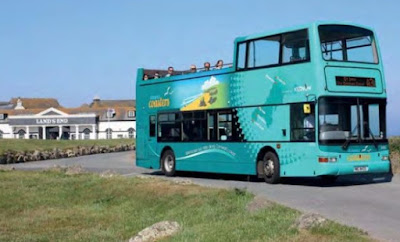 Top New Story Of Yesterday
We always trust the BBC to bring us accurate and meaningful coverage of all the news that matters to us. We currently enjoy being scared by Covid events and are very disappointed that the consequences of another terror (Brexit) seem to have vanished from the headlines.
But vital and earth shattering stuff is still provided to fulfil Lord Reith's great principles of broadcasting.
"All that is best in every department of human knowledge, endeavour and achievement.... The preservation of a high moral tone is obviously of paramount importance."
So here is it - the big news of yesterday. 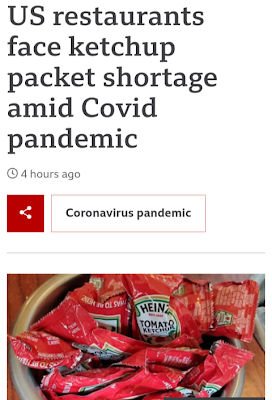 Thanks BBC - our lives are now fulfilled, educated and complete.
Next Variety blog : Saturday 10th April
Posted by fatbusbloke at 02:00