The Remaining Rainbow AT LAST 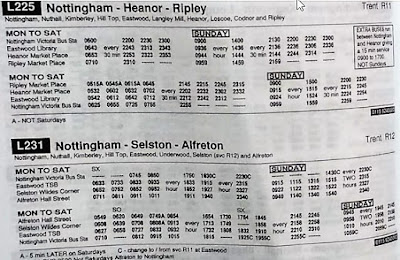 Following in the wheeltreads of Notts and Derby trams, trolleybi and bus route A1, the first (?) of the new-look multicoloured rainbow Rainbows was to run between Nottingham and Eastwood then split with one branch following history and going to Ripley; whilst the other branch would run to Alfreton.

BOTH would be called "Rainbow 1". Traditionalist bus watchers were aghast. How could two patently different routes be called the same thing? No good would ever come of it. The Ravens would leave the Tower of London and Trent's bosses would have egg on their corporate faces.

But that's what they did.

In a vague and haltingly unreliable memory, fbb thinks that one half was branded Rainbow 1 Blue (with blue destination blinds) and the other half was Rainbow 1 Red. Or is that a sad rambling of the old man's easily confused mind? 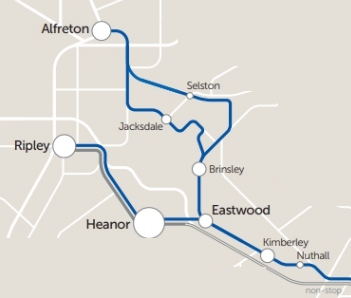 The original is via Heanor, then the Alfreton leg has two routes.

In 2011 a further option appeared with one bus an hour running non stop from just beyond Heanor. It was dubbed the "Rapid One" - because it was a lot faster, see. Here's how Derbyshire show the timetables. Firstly the one one (actually two ones) that runs from Alfreton ...

Notice, however, that the County includes the rapid one (called the Rapid One) in the main Ripley one timetable.

Obviously easy peasy if you are travelling Nottingham-wards; and OK for the return provided that you get the times right and look VERY carefully at the destination display, you should be all right. 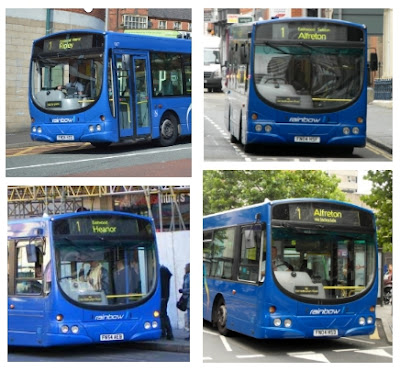 Remember; they are all the same "One", they are the last remaining Rainbow one, but they all go to different places.

The Derbyshire timetable layout does not recognise the not-quite every ten minute frequency from Eastwood; the "not quite" being the gap created when the Rapid One does not stop between Langley Mill and the City, thus leaving a twenty minute hole in the frequency. 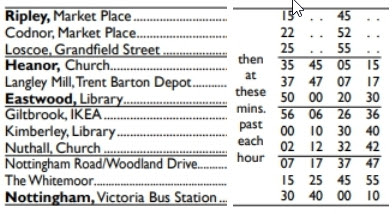 The missing one (the Rainbow one which had turned into the Rapid One) has gone from the timetable and been replaced with a "normal" stopping journey - the ten minute frequency from Eastwood no longer has an annoying gap.

Derbyshire now shows the one that has been removed as a separate table.

It would be difficult to include it as it leaves 5 minutes after the xx15 stopper and arrives in Nottingham 18 minutes before the ordinary one.

How does Trent communicate all this? Sensibly it shows three separate tables for the three ones ... 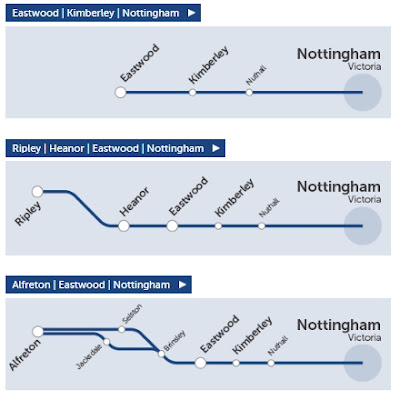 ... which does make you wonder whether using the same route number is a sensible idea.

The Rapid One is a completely separate one.

But the Trent magic begins to evaporate a little. Here is the graphic on the web site:- 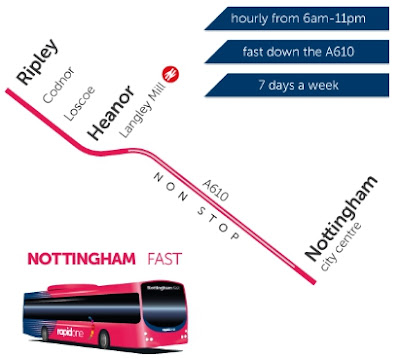 It shows a puce paint job. But here is one of the latest buses ... 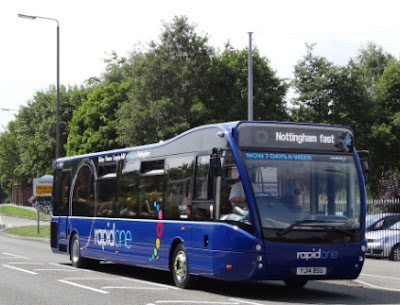 ... palpably not particularly puce, perchance? Even fbb's deteriorating visual acuity can see that! But there is worse. 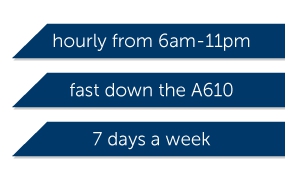 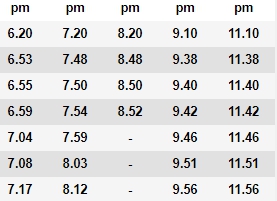 And one little niggle which always irritates your corpulent correspondent:- 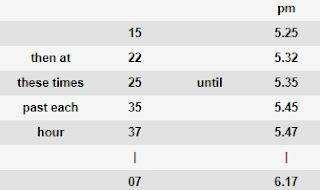 What does the above mean? It SHOULD mean that there is a one bus at 1715, followed by another one at 1725. But fbb reckons that it doesn't mean that. "Repeat patterns" should always confirm the end of the repeat, here a bus at 1615, THEN one at 1725, to avoid ambiguity.

It is a pity that these bludners detract from an otherwise excellently publicised network. Operators some 35 miles to the north could learn a lot.

They won't but they could.

As usual, regular users will soon get used to the mysteries of Trentbarton branding - but one does one-der whether these four ones are one step too far.

Please note : at short notice fbb is off to Sheffield today and back tomorrow - visiting lorry driving Dave (remember him?) in Sheffield. A report on the journey may appear in Monday's blog. Dave has been suffering from a long period of hospitalised ill health and a visit is long overdue.

Tomorrow's and Monday's blogs may be somewhat abbreviated as fbb copes with a sudden change of plan and the utter tedium of long journeys in a CrossCountry Voyager!