An age ago, fbb went to some "do" at the Millennium Dome possibly to celebrate the completion of the Traveline Project. There was a buffet lunch, some brief and meaningless speeches and the opportunity to "enjoy" the exhibitions and the "show" at the Dome for free.

By pure co-incidence fbb arrived at the same time as Brian King, then boss of Trentbarton. 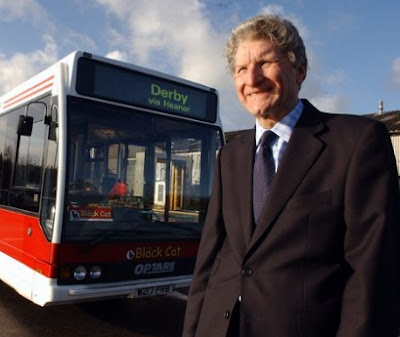 The twosome ambled around for a while together and chatted about the sadness of things, including the fact that the completed Traveline was then a very poor tool.

1. "We simply told the council that we did not sell that product any more."

Explanation? Trent had been concentrating its efforts on profitable routes and pulling out of various odd diversions into estates and villages where no living soul was ever picked up or set down. There was unrest with this policy but King stood his ground, leaving the council to decide whether to tender fort the back-road routes.

Explanation? Trent were generating new business by improving and marketing some traditional bog-standard routes in the firm (and often correct) belief that the people of Nottingham and Derby would be encouraged to make extra journeys to these "new" places.

Thus begat "Red Arrow" from Nottingham to Chesterfield via Derby. 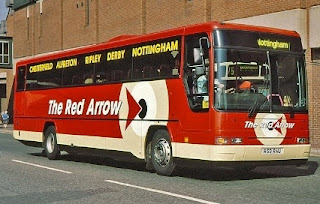 The Red Arrow now provides the premium service between Nottingham and Derby ... 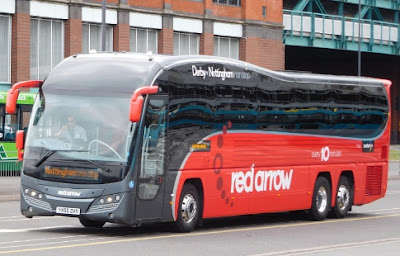 The bit from Derby to Chesterfield is now "The Comet" ... 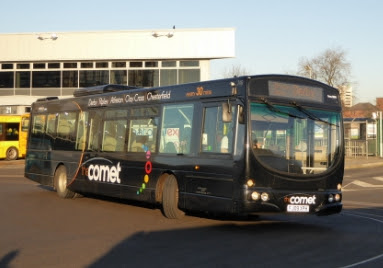 ... with not quite so posh vehicles. It uses the fast A38 to escape from Derby, thereafter being a normal stopping service. 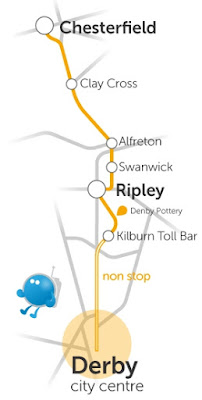 In the years after privatisation, Trent and Barton, still branded as separate operations, started singing a rainbow. Unlike today's colourful route branding, this consisted largely of the letter R in front of route numbers and, occasionally, a bit of colour around the fleet name area. 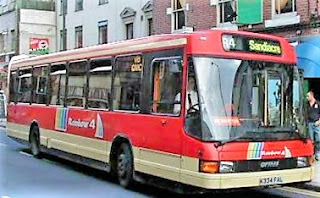 The now-familiar frequent express service between Nottingham and Derby was the R1, but only running every hour ...

... with certain journeys continuing to Manchester. R1s began to acquire a "Transpeak" logo ... 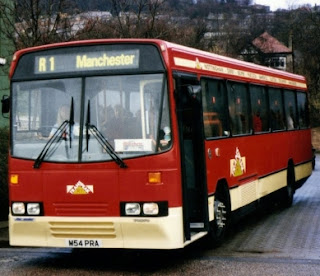 ... eventually becoming purely an unnumbered "TransPeak" (now run by High Peak from their Buxton base and soon to terminate there and no longer run through to Manchester.)

But if the Express was only hourly, where did the present ten minute "Red Arrow" frequency come from.

This leaflet shows how things began to happen. 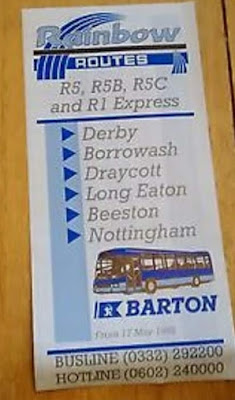 Barton's service 5 (with many variations) was the service "direct" via Long Eaton between Nottingham and Derby.

As Trent developed the policies outlined by Brian King at the Millennium Dome, the bits and pieces of the 5 (later R5) were dropped and passengers were encouraged to transfer their allegiance to a steady improvement in the express! 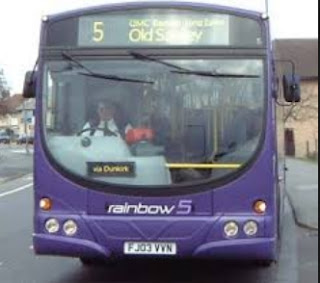 ... which eventually became its eponymous colour and was renamed "The Indigo". 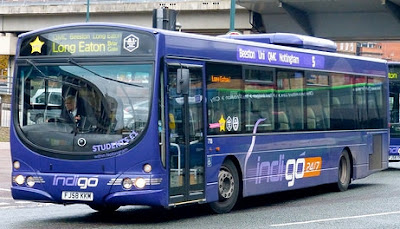 This runs every 20 minutes "all the way" with an extra 20 minute headway between Nottingham, Long Eaton and Briar Gate. 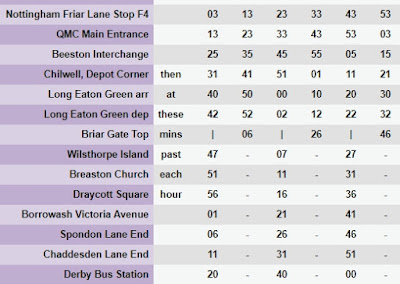 The route now runs "24/7" but only between Nottingham and Long Eaton!

To, sort of, complete the picture, there was also an R4 between Nottingham and Sandiacre ... 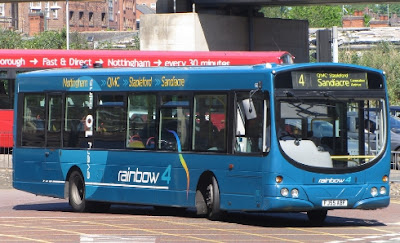 ... soon running through to Derby. 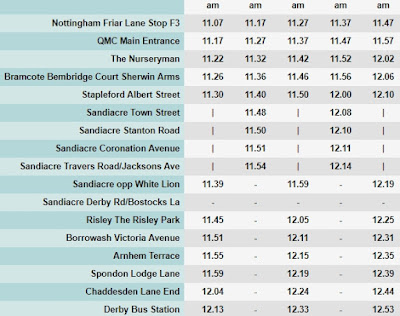 It has become the "i4". (no idea what that signifies!) every 20 minutes through, every ten to Sandiacre. 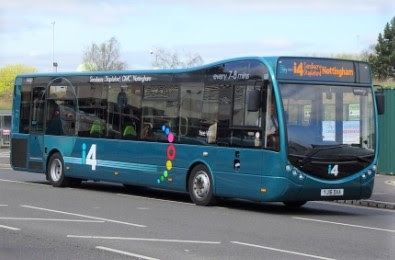 Thus we have two tidy and easily understood "stopping" routes between the two communities, with a minimum of wiggles; and through passengers using the "non-stop" Red Arrow. Trent concentrates on the core business and makes sure people have somewhere to go - it being quick and easy to hop from one shopping centre to another, or to commute or get to the big regional hospital (QMC) in Nottingham.

It would appear that the philosophy as outlined all those years ago by Brian King produces the required results.

But the early proliferation of Rainbows was to change over the years.

There is now only one Rainbow left as we shall see tomorrow.

The above is a very rough summary of happenings along and near the A52 corridor. If fbb has got it badly wrong, not doubt Nottingham experts will comment on his incompetence! 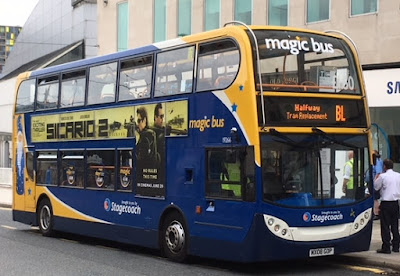 Well, actually no it doesn't. The lads and lasses at Stagecoach Supertram are having some strike in-action (so far, yesterday and Friday). A few trams have run, but a reduced frequency bus service (e.g. BL - BLU - Blue Tram) is in operation.

Thanks to correspondent Roy for the picture - waiting time in Commercial Street. The bus, formerly in standard Stagecoach dress ... 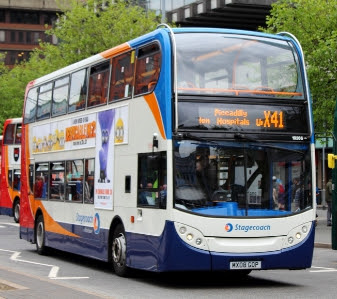 
Next Rainbow blog : Thursday 12th July
Posted by fatbusbloke at 02:00