No 1 son has just returned from a speaking engagement in Israel. To titillate his father's fancy, the lad send a few photos of the city's tramway system, a k a Jerusalem light rail. Before we take a look we need to remember that Jerusalem is a divided City; divided religiously (Moslem, Jewish, Christian), divided politically (Jew, Arab) and divided linguistically (English, Hebrew, Arabic).

The rights and wrongs of these tensions are not an appropriate discussion for a public transport blog, but wherever you go, they are there. 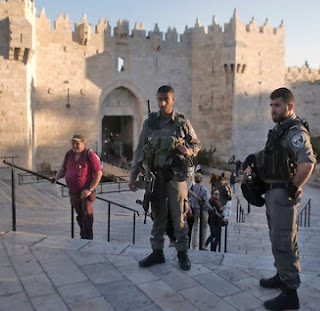 "Not pleasant, but you do get used to it", fbb was told.

City buses are green and run by Egged as is much of the rest of Israel. 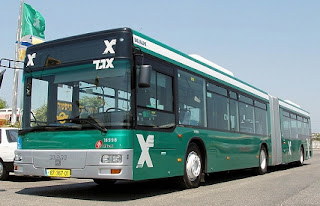 Traffic in the city is horrendous, exacerbated by the huge number of tourists. Here tourist coaches are parked near the Garden of Gethsemane and way off into the distance.. 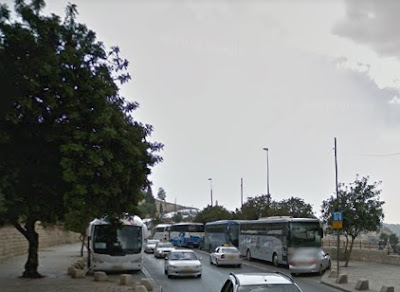 In the 1990s, the city authorities decided that a rapid transit network was the solution to pollution, traffic and the steady decline of some parts of the city centre. Three "light rail" routes are planned, the first of which is now open. Work began in 2002 and the line opened in 2011.

A word of warning; because of the Arab/Israeli "divisions", names can appear in their Hebrew version, their Arab version, their English version or any combination of all three. 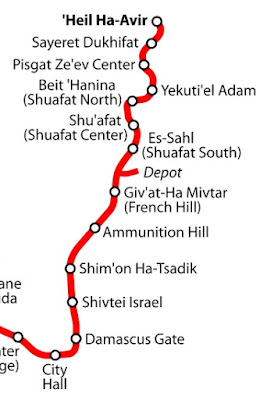 We will join the line at its current northern terminus, courtesy of Google Streetview. At Heil Ha'avir in the north ... 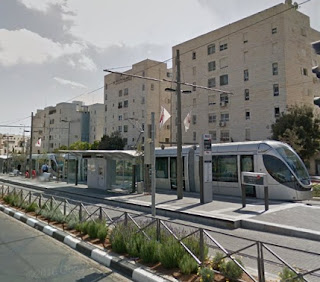 ... trams tun forward some distance from the current terminus ... 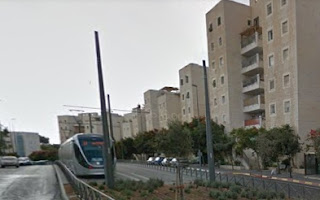 ... into a long "headshunt" from which an extension is in the development and contracts stage.

Almost all of the line in on "reserved track" with traffic light priority at junctions, a system which didn't work properly in the early days leading to a temporary and very slow timetable. (Sounds familiar??).

For those of us used to tourist pictures of Jerusalem or even the Biblical accounts, it comes as some surprise to realise how small the ancient city was ... ... with that grey blob (upper right) being the old bit, with a few Biblical sites "without the City wall"! 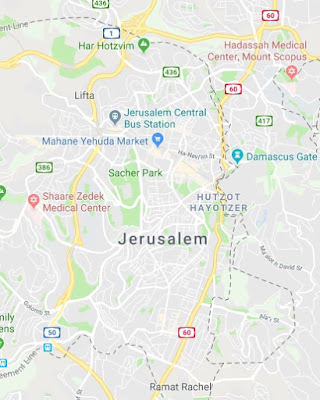 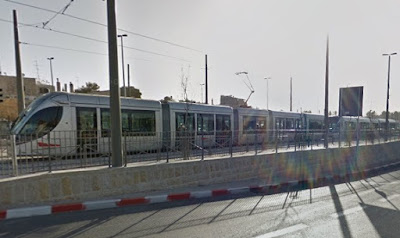 Somewhere behind the tram, beyond the terrifying traffic and partially below road level is that (in)famous entrance to the city. 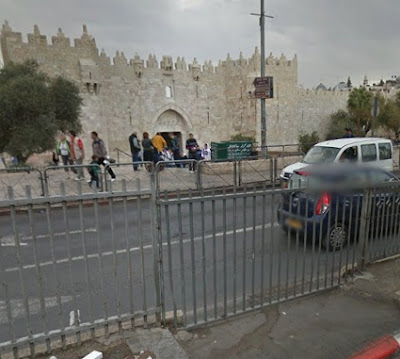 When Paul left Jerusalem to arrest what eventually became known as Christians, he would have exited this way ... 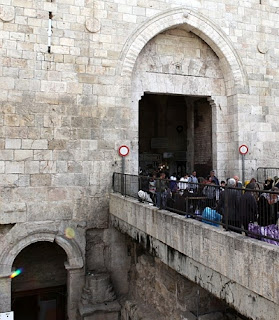 ... but not through the big gateway. That was built by Ottoman dictator Suleman the Magnificent (in 1537) ... 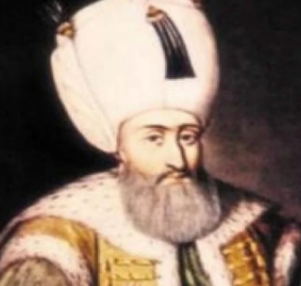 ... he of the hyper-hat. Perhaps he was only four feet tall and needed the mega headgear to be spotted in a crowd!

Recent excavations have revealed a Roman gateway at a lower level again, if not the actual Pauline egress, certainly something very much like it. Opposite the Damascus Gate and up the old Nablus Road ... 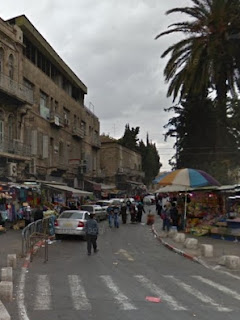 ... (note the profusion of tourist grot) is the (likely) site of the Garden Tomb from which Jesus rose, as celebrated on our Easter Sunday. 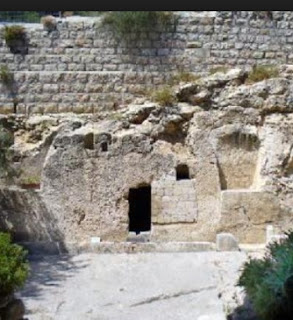 No 1 son paid a visit and pronounced the experience as very moving.

Talking of moving, over the back fence of the tomb's garden ... 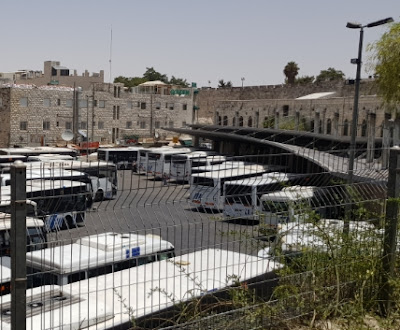 ... is one of several out-of-town bus terminals. Here is a 263 turning in from Sultan Suleman Street. 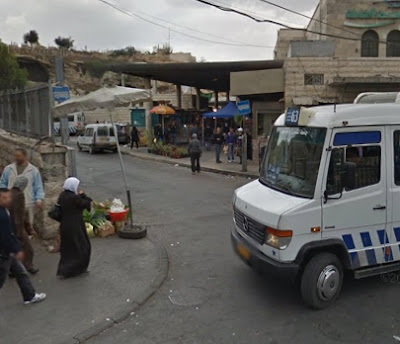 This is called "The Arab" bus station and the 263 will take you north to Bethany whence you can change to a shared taxi for the journey on to Jericho.

At Tsahal Square, the tram tracks veer right to travel along Jaffa Street. 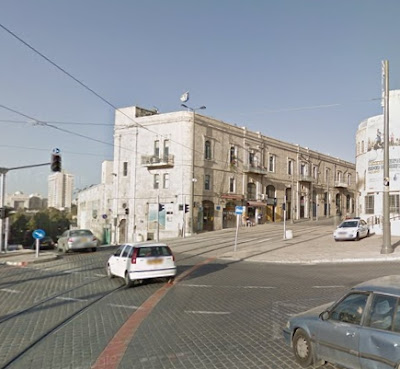 We will conclude this brief excursion tomorrow as the trams travel roughly westwards. 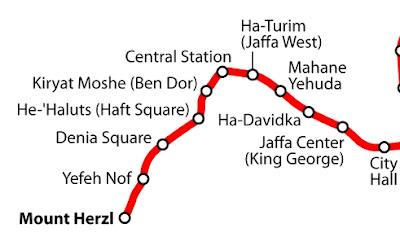 Meanwhile, in passing, herewith a map showing planned extensions to the red line and the proposed green line for which companies have been invited to tender. 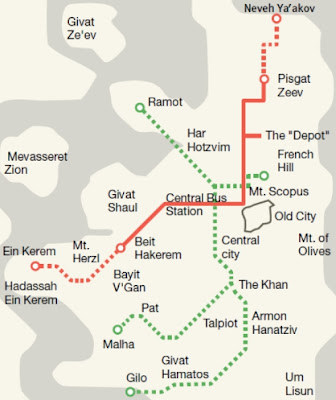 And immediately the press has picked up on the touchy politics of the city.

An international tender to build and operate Jerusalem’s second light rail line is failing to draw bids from overseas companies, which are fearful of arousing political opposition back at home because the proposed line runs into parts of the city seized by Israel in the 1967 war.

Israeli government officials say they have been told that the most problematic parts of the proposed Green Line – a project that could cost as much as 5 billion shekels ($1.4 billion) and stretch along 22 kilometers – are the ones that reach Mount Scopus and Gilo.

Mount Scopus, the site of the main Hebrew University campus, was controlled by Israel before the Six-Day War as an isolated outpost. But Israel subsequently annexed land between it and West Jerusalem. Gilo, a neighborhood in the city’s south, was annexed along with other areas of East Jerusalem shortly after the war.

Tomorrow we stick to the trams!