The bus service between Minehead, Porlock and on to Porlock Weir ... 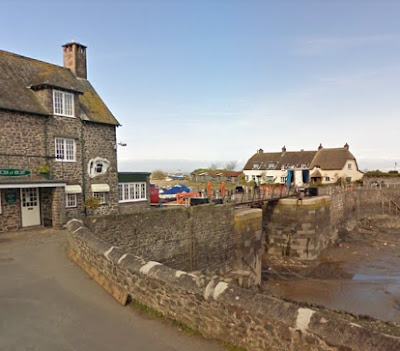 ... is, indeed, a microcosm if the UK's ailing bus industry, continuing to ail over the last half a century. Yesterday we went through the stability of Western National, via Scarlet ... 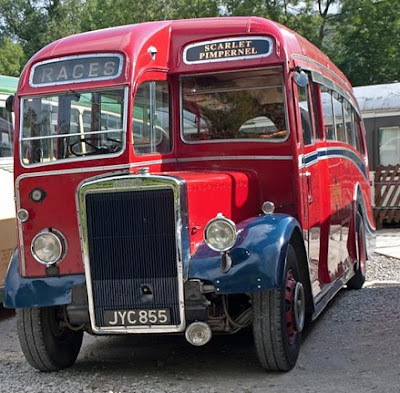 ... with, then without its Pimpernel, on to Southern National, privatised then part of First. Another big company retreat and the arrival of Quantock; then pointless and destructive competition from Webberbus ... 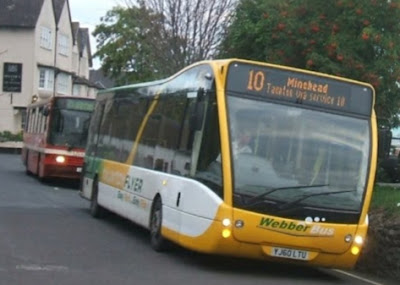 ... but with First (seen below coping with a very high tide!) holding on to a school contract which might have saved the all-day operator. 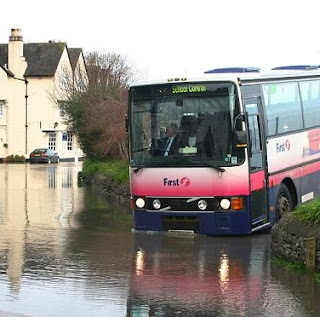 Any bus watcher with a brain cell could see that Webber Bus had expanded beyond the strength of any financial support so its collapse was expected and came in 2014.

It was, as Mrs fbb might say, a "Bonny Stramash!" 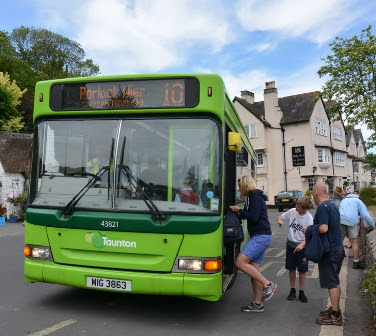 Buses of Somerset stepped in and provided a tendered replacement for both the Porlock Weir service 10 and the Minehead Town service 10A. It was not long before the emergency timetables were considered ‘optimistic’ and the two services were recast to be operated by one vehicle. 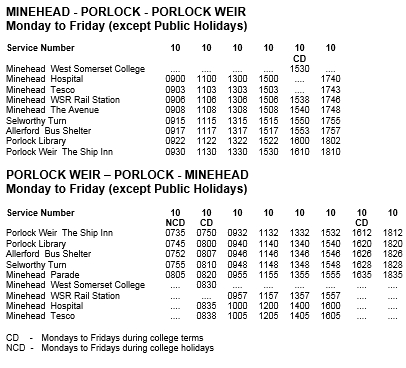 The town service (now numbered 11) trundled on its near unfathomable route in the hour's gap between arriving at Tesco and departing back to Porlock Weir.

Even this did not satisfy the (unrealistic?) financial criteria demanded by First Group and early in 2018 Buses of Somerset announced their intention to withdraw both the two services as discussions with the local parish councils could not bridge the gap between income required and financial support available. Somerset County Council had long since said it had no money to support the service.

It then gets very complicated - too much so for a brief blog - so we roll the clock forward to the start of the new service on Monday 19th February of this year.

The "bonny stramash" became more bonny (less bonny really!) and much more of a stramash.

A click on the Trraveline index reveals a true feast of buses to Porlock and The Weir. 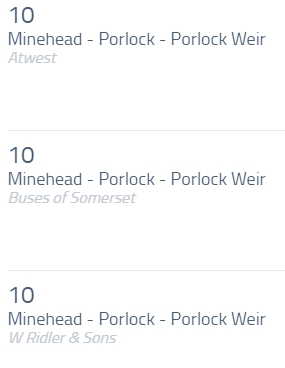 First Bus are still there wearing their Buses of Somerset disguise and still running the school journeys ... 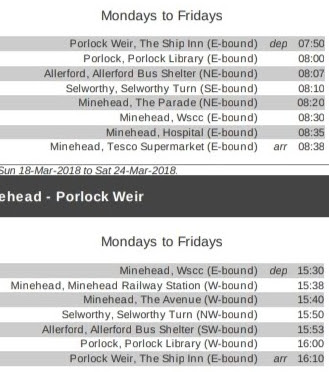 ... for which they usually supply a yellow school bus. 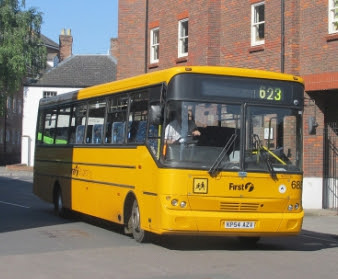 Then Ridlers run two journeys on Mondays to Fridays ... 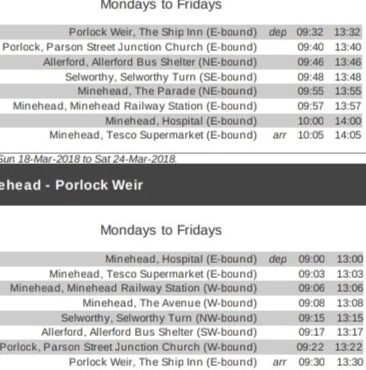 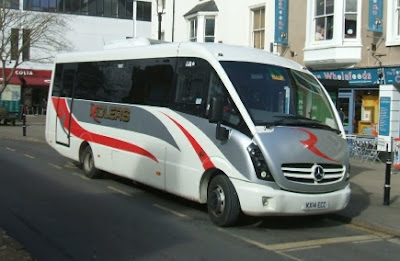 Which leaves the enigmatic Atwest operating the rest of the Monday to Friday service and the whole of the Saturday service. 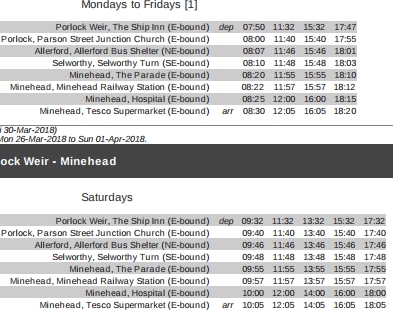 Atwest is the abbreviated name of a charity ... 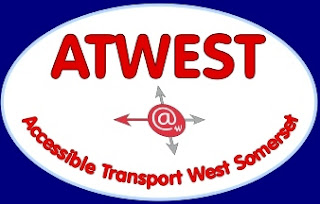 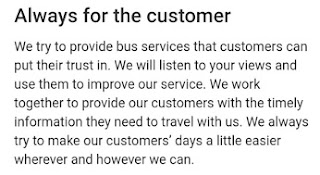 ... which will convey you in the luxury of a smallish minibus. 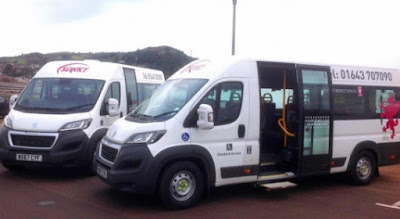 These community bus operators are less tightly regulated than "real" bus companies BUT the Department of Transport is now trying to "bring them in line" with the commercial bus operators. This will, of course, increase their costs and mean many will go out of business, so clearly a government policy which reflects their comedic acronym, DaFT.

Do these three operators have an interavailable fares policy? Guess!

Do these operators publish one co-ordinated timetable page in order to help the passenger? Guess.

Does Somerset Council do ditto. Guess.

Will these small buses be adequate for the Summer Tourist trade? Guess

If ever you wanted a textbook lesson on how NOT to provide a socially necessary bus service that might make money in the peak Summer, this is it.

fbb suggests putting the whole lot, operators, County Council, Parish Councils and community representatives in a large room. Give them all a pair of boxing gloves, lock the doors and don't let them out until they have sorted out a sensible way to behave.

And An Apology!
In yesterday's blog, fbb suggested that Minehead was in North Somerset. 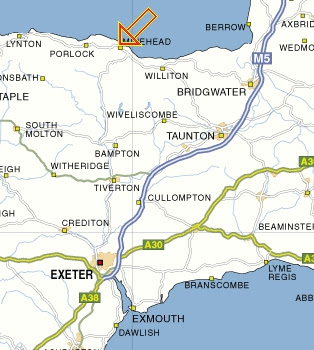 Sorry folks, it is in West Somerset. According to fbb's anonymous local resident, who supplied much of the material for this blog, the district is soon to be renamed Somerset West - a scheme to use up some of the money which is being saved by not supporting a sensible bus service between Minehead and Porlock.

The effusive praise, the Palms, The Cloaks, The Donkey etc. all spoke of a reign of victorious peace with Jesus as "The King" - then he went and got himself crucified. But at no stage did he try to avoid conflict; the "something" that was wrong needed exposing despite the cost.

The first place he went to was the Temple at Jerusalem, the centre of the Jewish Faith for nearly one thousand years.

But the "faith" was missing. 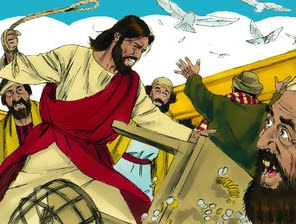 When they arrived in Jerusalem, Jesus went to the Temple and began to drive out all those who were buying and selling. He overturned the tables of the money changers and the stools of those who sold pigeons, and he would not let anyone carry anything through the Temple courtyards. He then taught the people: “It is written in the Scriptures that God said, ‘My Temple will be called a house of prayer for the people of all nations.’ But you have turned it into a hideout for thieves!”

To pay your tithes to the temple you had to change everyday money for rip-off "temple" money; to offer the sacrifice of a dove or lamb as per regulations you had to buy a temple dove of lamb at equally rip-off prices.

Where was the respect for the house of God?

There was none; but Jesus anger was not designed to make himself popular with the authorities. He railed against the ... 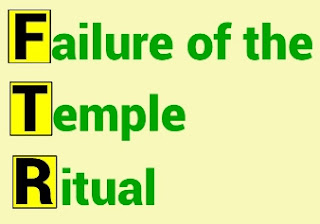 You do wonder how Jesus would react if he were to return today and pop into one of our Cathedrals. 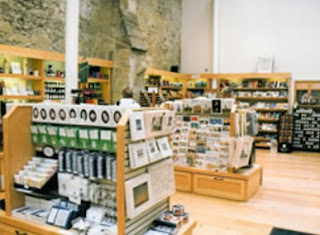 Or how might he challenge the tired and lifeless worship in many of our churches.