It is amazing what this blogging fettish turns up. No sooner had fbb posted a picture of a bus labelled Porlock Blue than the emails flooded in (well two of them!) with details. Here is the photo included yesterday ... 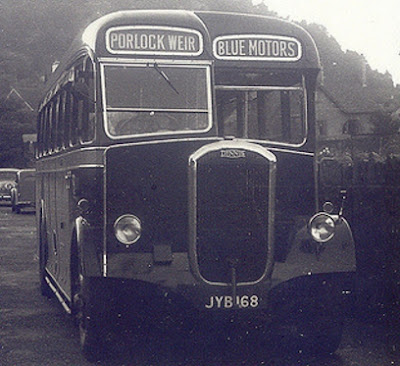 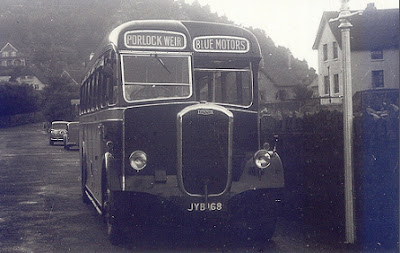 And here is the email received from our man in West Somerset (with fbb additions).

The photo of JYB 168 is a 1947 Harrington bodied Dennis Lancet. It looks as if this was possibly taken in North Road, Minehead, where Blue Motors had a garage, although I stand to be corrected on that as if anyone comes up with a better suggestion.

You are right Mt Nonymous. Here is the present street lamp on North Road ... 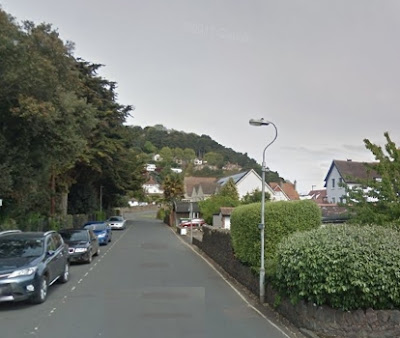 ... and local authorities are rarely inventive enough to move a street lamp, straight replacement involves far less paperwork! The white house on the right is unchanged and the slope of the land is definitely the hills at the west end of the sea front.

There is also a clutch of assorted garages somewhat nearer the town; some or all of which could have been occupied by lovely blue coaches. 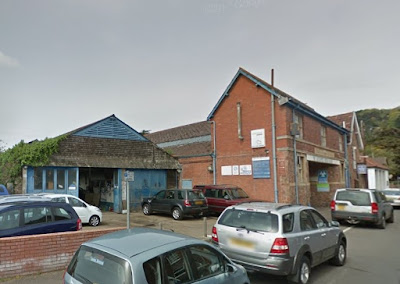 They also had an outstation at Porlock Weir - see attached pic taken from google maps. 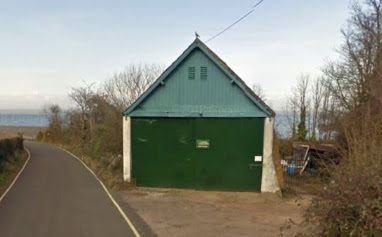 The building was (is?) in use by an Exmoor Adventure Company. 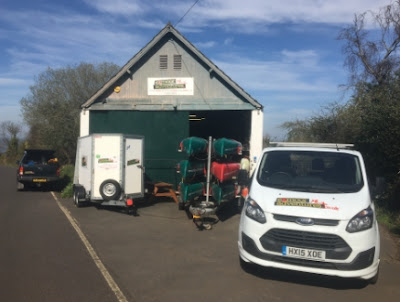 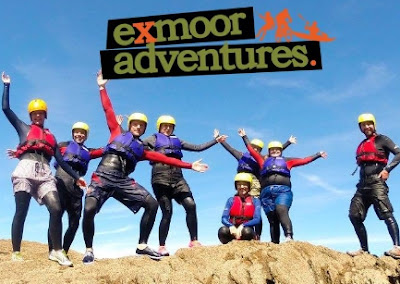 Their facebook blob is still at the dormy shed! 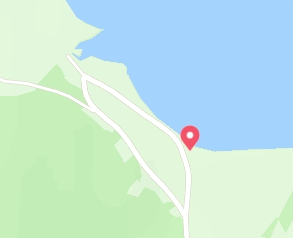 The service was very frequent in the halcyon days of bus operations running almost every quarter of an hour in in the early 1950s and joint with Western National.

There was one other important operator from Minehead – Scarlet Pimpernel and the two fought over coach business. 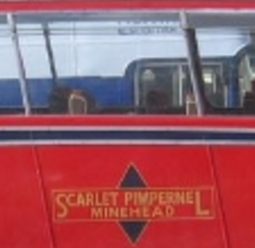 In 1954 the two businesses merged into Scarlet and Blue, eventually shortened to Scarlet Coaches which was in 1966 purchased by Douglas (Douggie) Venner.

That is now explained - thanks fbb; as is a Scarlets bus outside the premises in North Road! 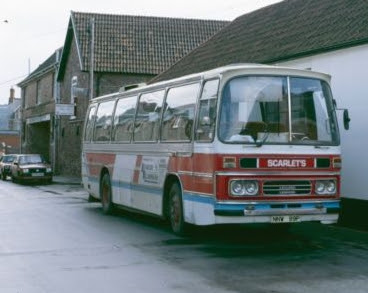 Scarlets passed to the next generation of Douggie’s family and, a much smaller business, eventually sold out to Southern National in the late 1990s. Scarlets operation, in post-Douggie days, was basically in the hands of Martin and Terry Venner who could not get PSV driving out of their blood and, having sold out, today both work part-time for Buses of Somerset.

Both Scarlet and Blue have buses in preservation. 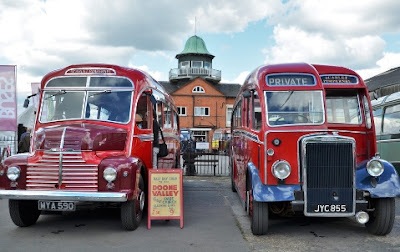 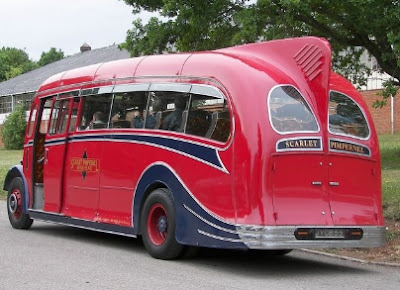 ... but if you want a real "luxury" coach, look no further than Porlock Blue's preserved beauty/ 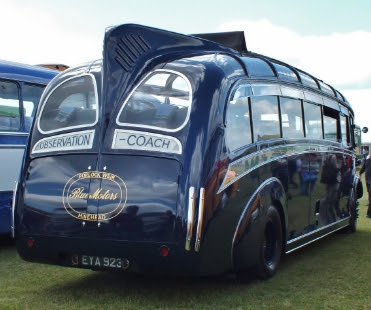 EYA 923 has the fin (of course) but also quarter lights above the normal windows and a roll-back canvas (?) roof, just glimpsed rolled back in front of the fin, above. 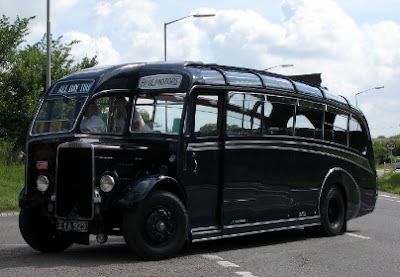 Now those WERE the days.

It was, as we all know, Baroness Orczy who wrote the classic tale about the elusive Scarlet Pimpernel ... 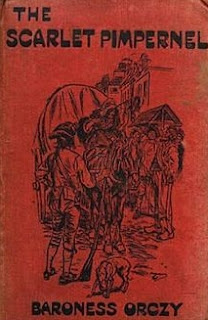 ... and one of the key characters, Sir Percy Blakeney, who uttered these immortal lines as he waited by a desolate West Somerset roadside.
We seek it here, we seek it there,
The people seek it everywhere.
Is it in heaven? - Is it in hell?
The bus that once was Pimpernel. 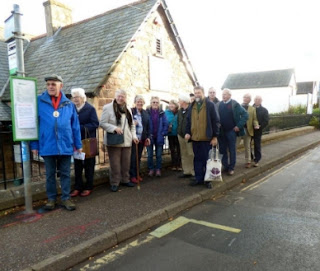 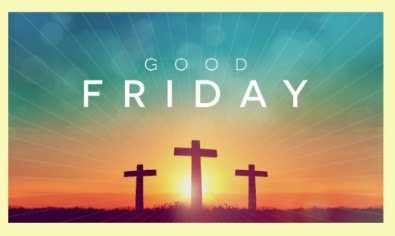 Looked at from theological innocence or ignorance, the name "Good" Friday is utterly daft. The Mel Gibson film (2004) "The Passion of Christ" was condemned by the press and, indeed, many Christians for its "gratuitous violence". 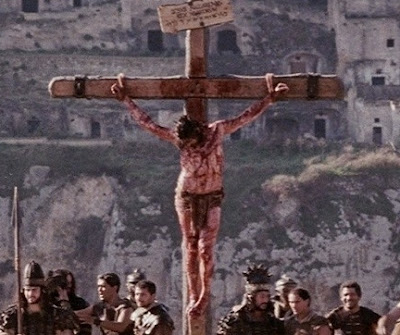 It certainly had more than its fair share of grue. 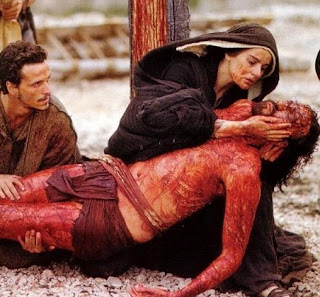 But is was, essentially, very accurate violence! And today's "audience" doesn't like the scourging, the crown of thorns and the spear in the side. But a Roman Crucifixion was appallingly cruel.

So why did Jesus willingly suffer?

The prophet Isaiah sets the theme when he prophesies what God's servant (the Messiah) will do when he comes.

But he endured the suffering that should have been ours,
the pain that we should have borne.
All the while we thought that his suffering
was punishment sent by God.
But because of our sins he was wounded,
beaten because of the evil we did.
We are healed by the punishment he suffered,
made whole by the blows he received.
All of us were like sheep that were lost,
each of us going his own way.
But the Lord made the punishment fall on him,
the punishment all of us deserved.

It was Jesus' prayer in the hours before his arrest that clinched the deal. 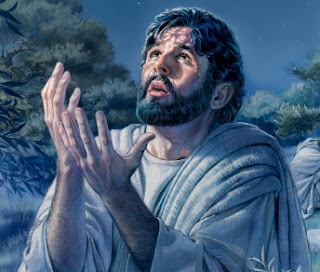 He went a little farther on, threw himself on the ground, and prayed that, if possible, he might not have to go through that time of suffering. “Father,” he prayed, “my Father! All things are possible for you. Take this cup of suffering away from me. Yet not what I want, but what you want.”

So it was not HIS punishment, but OURS?