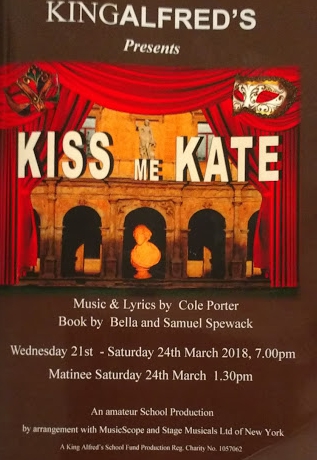 The fbb's returned at lunchtime yesterday from an overnight at the Bear, Wantage. The purpose was to enjoy the performances of No 1 grandson (aged 17) and No 2 grandson (aged 14) in the school show. No 2 was in the chorus but stunned the old folks as a street enterainer doing some juggling. No 1 was one of the stars.

He is a year 12 student who, yet again, has been type cast as the star "villain", Fred Graham. Previously Gaston in 'Beauty and the Beast' and Reuben in Joseph', Caleb is currently studying English, History and Psychology, He is also working with Benedict on their band 'The Wayfarers' and is thankful to the Creative Arts Department for the opportunity.

He (and the show) were both excellent. Accommodation for the fbb's was at The Bear ... 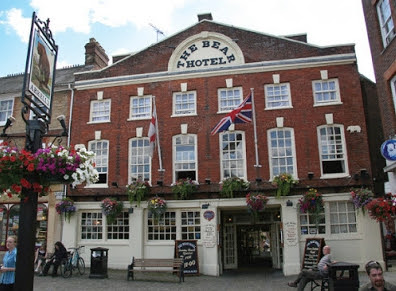 ... complete with a superb full breakfast. Out of the breakfast room window there was a reasonable view of goings on at the main Market Place bus stop. Whilst Mrs fbb handled domestic matters in the comfortable room ... 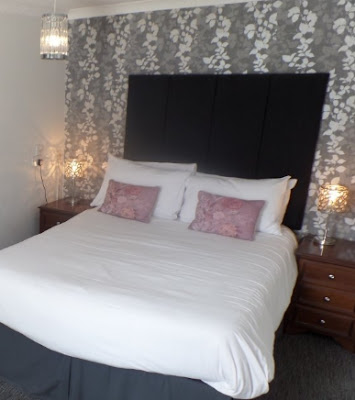 ... the bountifully breakfasted big bloke was able to take a few snaps outside as well.

Firstly of note is that he routes from Oxford (Stagecoach X30 and X31) have gone Gold as S8 and S9 respectively. 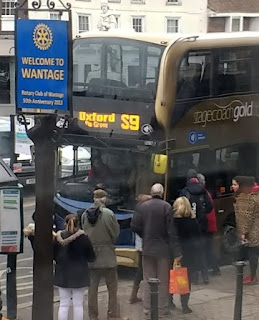 No 1 son tells fbb that this is a decision of convenience rather than marketing as the timetables are unchanged ... 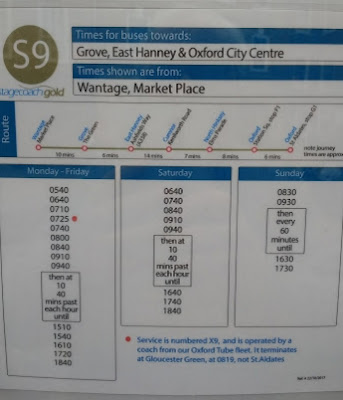 ... but he does like the "posh buses" which he defines a "Cool". Apparently these S8 and S9 "golds" have been displaced by newer vehicles on Oxford's other "Gold" routes, so it was easier to re-band the X30 and X31 rather than unpaint the old gold buses. Indeed, for a while, the route numbers remained unchanged but with the newer old gold buses. 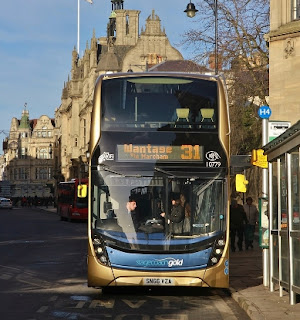 Sad, then, that the first X30 bus fbb saw on these Gold routes was a standard Stagecoach decker in corporate livery. Disappointingly the old man was attacking a very tasty sausage at the time and did not make it to the phone/camera in time. But it was just like this one. 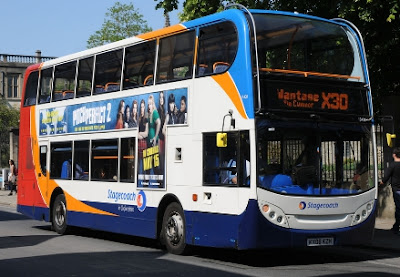 More success with the Animal route to Faringdon. 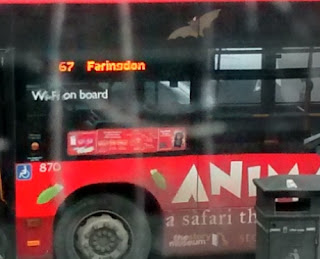 fbb was able to photograph the vehicle on its return ... 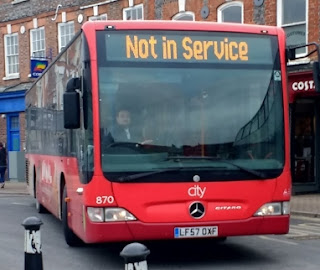 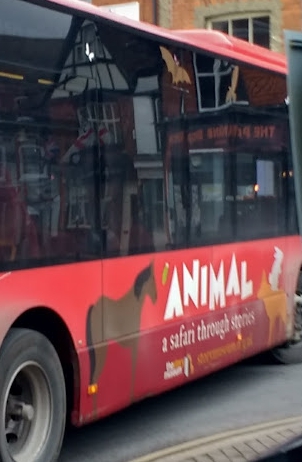 Tuesday 1st November
All aboard as The Story Museum gets a bus full of Animals!
Oxford Bus Company and One decorate Bus in support of The Story Museum
Oxford Bus Company is celebrating its partnership with The Story Museum by decorating one of its buses with an animal menagerie. The bus, which features animals including foxes, bats, rabbits and crickets, will be used to promote the museum’s current exhibition ‘Animal!’, which explores the roles of animals in stories including War Horse, Watership Down, Animal Farm and Wallace and Gromit. The exhibition has been critically acclaimed and has delighted thousands of visitors since opening in February this year. 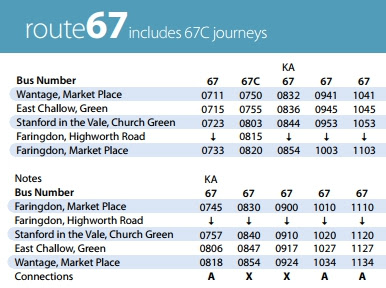 ... is operated by fellow GoAhead company, Thames Travel - which used to be coloured blue and green. 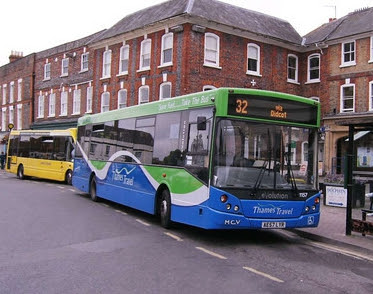 The "Story Museum" article quoted above happened in 2016 and fbb guesses that the bus had been transferred between companies. Shouldn't the Oxford-specific branding be peeled off? 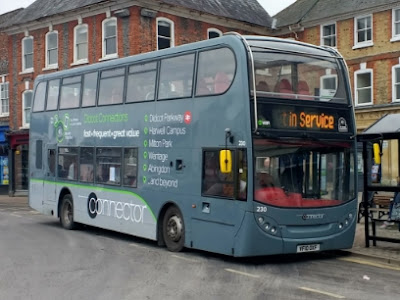 ... seemed to be carrying "Connector" branding. This originally applied to a 15 minutes shuttle ... 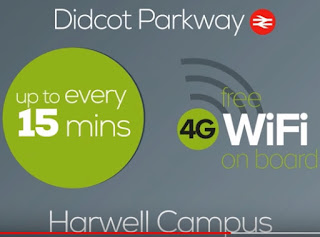 ... between Didcot Parkway station and the Harwell Science Park. But it sort of spread and absorbed the local bus service between Oxford, Didcot and Wantage. 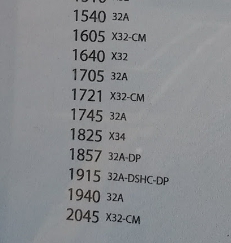 ... with different variations and therefore different notes on the Monday to Friday service (above) and Saturday. 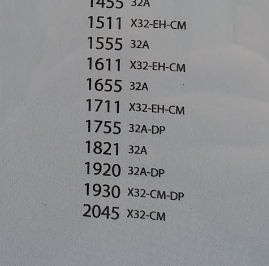 It is easier with a printed timetable, but you are not allowed such a thing in Wantage. For the record, here is a chunk of the Monday to Friday timetable ... 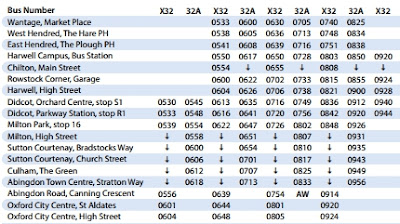 ... and the different version for Saturdays. 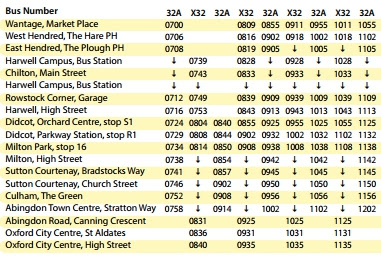 So why was a "Connector" branded bus on the Wantage Town service, route 38. 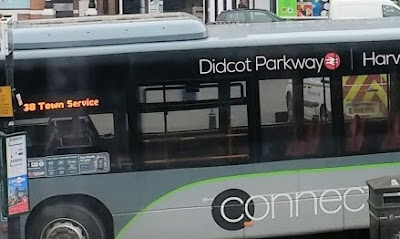 This used to be operated by independent Whites with a distinctive yellow bus (see picture of blue/green bus above) - now you seem to get anything with a wheel at each corner, often with inappropriate branding. 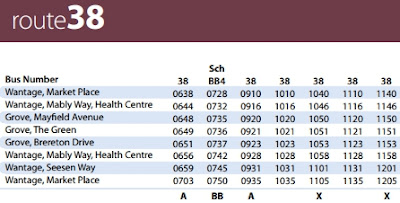 ... (see notes A and R above). So it becomes inevitable that buses with the wrong branding will end up on the 38.

In all these cases, wondrously watched at Wantage between 0830 and 0940 on Thursday last, the problems of using buses emblazoned with route branding become obvious. 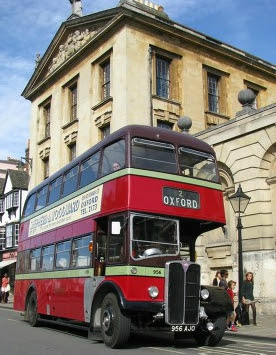 Maybe just one tidy and well presented livery for ALL the buses will throw out a better corporate image. in most areas f the country, that's how it used to be.

Generally speaking Joe public cares little for the colour of his bus. He wants it to be clean, on time and driven by a friendly and helpful member of staff.

Are there any statistical studies that show that applying a brand alone brings extra passengers.

Here is one of fbb's favourite brands. 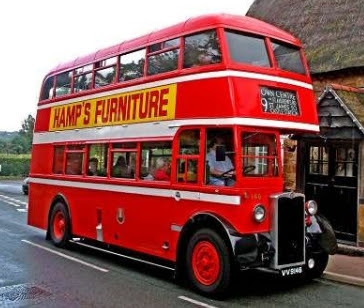