But First, Some Rail News

The Department for Transport has announced that management contracts (whereby DfT pays the operator a fee and takes responsibility thereafter for all finances) have been agreed as below. 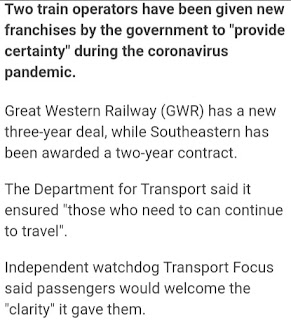 Just one tiny step short of nationalisation. Obviously this will apply AFTER the current Virus rescue arrangements come to an end. GWR is First Rail, South Eastern is GoAhead.

And A Jolly Good Bus Idea

In an spiffingly brilliant move, the company will transfer its technology and vehicles to a similar scheme replacing Sevenoaks town services.

It all kicks of one week from today. 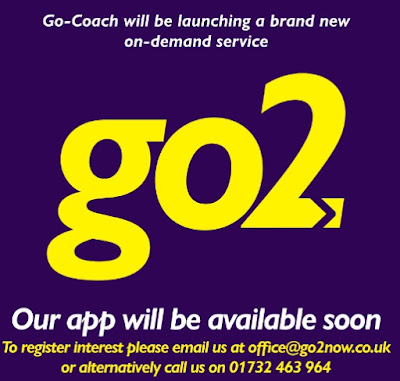 And further good news. Those who are not App-Happy will be able to book by phone; so the elderly, for whom modern technology is a fearful step into the unknown and unknowable, will still be able to get to their essentials.

More on this next week.

If fbb were researching for a blog in many European towns, he would, most likely, find all the buses congregating together at a bus station; not only that, but the bus station would be attached to the railway station.

But such delights do not apply at Hounslow. It is all very easy if you know what you are doing, but, for an innocent abroad (and Hounslow is way, way abroad compared with Seaton!) it is hugely challenging.

One of the simplest bus routes from Hounslow to near Heathrow is the historic 81. In the past it ran from Hounslow to Windsor, later being cut back to the delights of Slough. There was a brief time when Sunday journeys started back from Shepherds Bush, but, in essence, the route dates from 1934 with negligible change. (fbb is indebted to Ian Armstrong's encyclopaedic guide to London bus routes).

Mike Harris has one of his all-London maps for 1934.

Note, in passing, the grey Heathrow Road leading to the Great West Aerodrome, predecessor to something a bit bigger. Fairey Aviation used this patch for testing its planes. 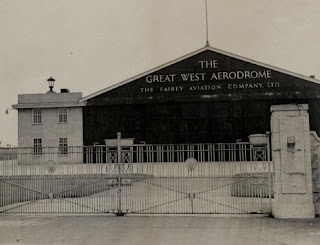 Even after Heathrow (then London Airport) opened, the 81 would be a useful way of getting there as the early "facilities" we along the Bath Road. There was a control tower ... 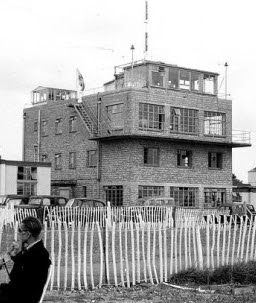 ... and the terminal facilities in tents! 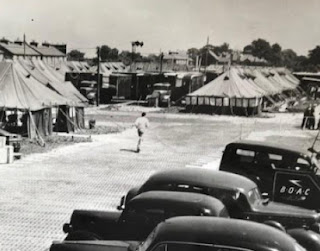 Note the comfortable
. armchairs and the Western Union cable table! 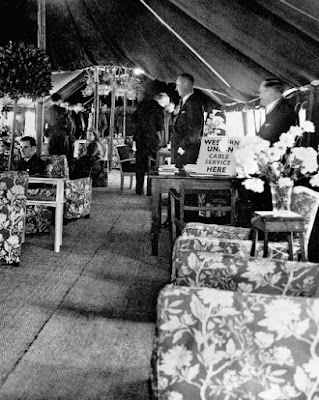 One snippet that fbb came across when collating this information concerns car parking. The London Airport bosses decided there would be no need for a car park as passengers for flights would be driven to the terminal by their chauffeurs!

The tents were eventually replaced by huts and then a proper building. 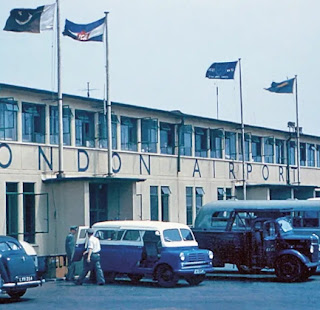 Even after the new terminal in the centre of the site was opened in 1955 the "North" terminal was still used for what were described as "Transcontinetal Services", i.e. those routes operated by the British Overseas Airways Corporation (BOAC). British European Airways (BEA) had the posh new set-up in the middle. 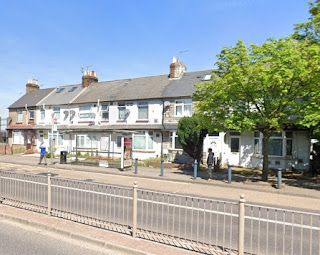 ... but there appears to be a bigger demand for parking these days!

When It's Hounslow Bus Station!
The bus station is, effectively, the forecourt of Hounslow Bus Garage, built in 1955. But it would appear to have only two stands. 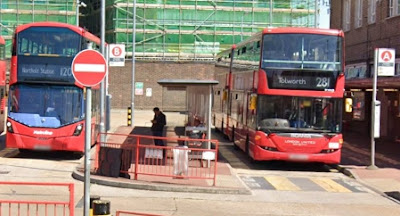 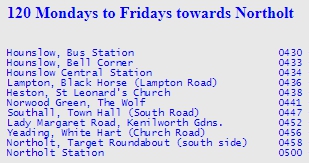 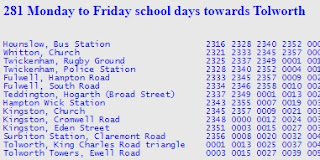 Buses terminating at the bus station (including 120 and 281) ALL set down on London Road ... 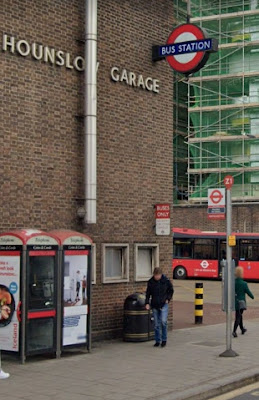 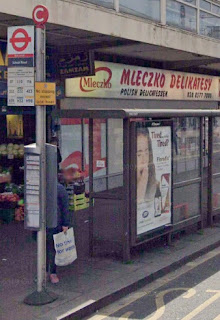 This is called School Road by some (including TfL) but more correctly it is High Street sort-of near the end of School Road. 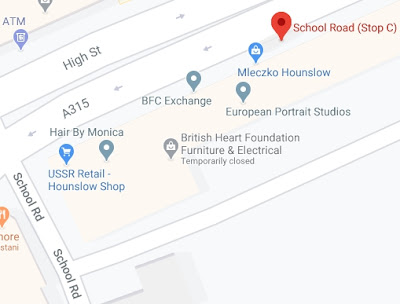 The bus station is on the eastern edge of the town centre so buses terminating at Hounslow but arriving FROM the east continue through the town and turn at Bell Corner on the western edge of the centre as with the E8 from Ealing.

Other buses stop outside the bus station on London Road to set down AND pick up ... 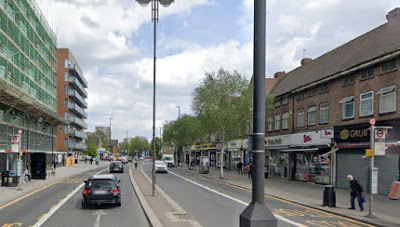 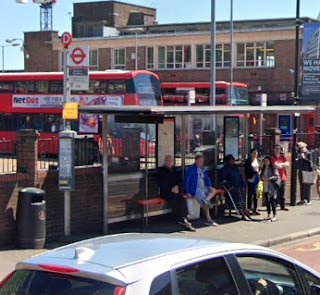 ... on its circuitous way from Heathrow to Kingston. In the other direction it stops on High Street sort of opposite the 81 departure point.

So, one way or another, does everything in Hounslow stop at or NEAR the bus station?

Maybe the Transport for London on-line Spider map will tell us. 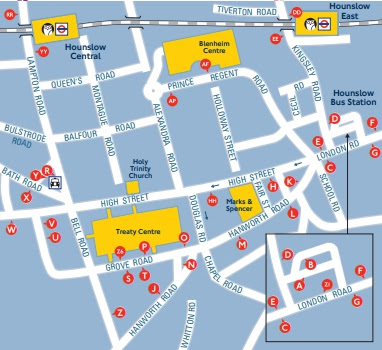 Goody! It shows all the routes and all the stops. Excellent!

But there is no index - so you don't know which bus stops where. Well done TfL!

fbb guesses that you need to search each route in which you have a passenger's interest, then return to the above map to find the geographical location. 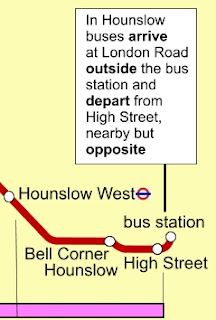 ... BUT SHOULD BE. For an organisation with plenty of clout like TfL, they ought to do better; surely something to be looked at when services are being cut and staff are only able to work at home.


Interestingly the key word celebrated by yesterday's palm Sunday is "Hosanna". We tend to obscure the real meaning in some very general phrase like "Praise God"; but, more accurately, the Hebrew translates at "We Pray - Save". (Appropriate for today, eh?)

The people should have understood that this "saving" was not like relying on a military or political saviour. Here are a few words from an old Hebrew pop song (we call it Psalm 118), sung at meetings and festivals since it was composed anything up to 1000 years before Jesus arrived on the scene.


The stone which the builders rejected as worthless
turned out to be the most important of all.
This was done by the Lord;
what a wonderful sight it is!

So not a failure then - a huge and eternal success.


In my distress I called to the Lord;
he answered me and set me free.
The Lord is with me, I will not be afraid;
what can anyone do to me?
It is better to trust in the Lord
than to depend on human leaders.

"The Lord" is on hand to offer personal and deep rooted help in ALL circumstances - and for the age of the new witness to God, the New Testament, "The Lord (Jesus)" has come to earth to save us from our failings and from humanity's failings.

The Covenant hasn't changed, but we've got a heap more help.

Next Hounslow blog : Tuesday 7th April
Posted by fatbusbloke at 02:00