Please note :- to fit in with the fbbs' duplicate Fellowship meetings, Saturday and Sunday Variety have morphed into Monday and Tuesday Variety. It is a bit easier to cobble together a "variety" blog today and tomorrow  than to do a "proper job"!

The Perturbing Problem of Ponton 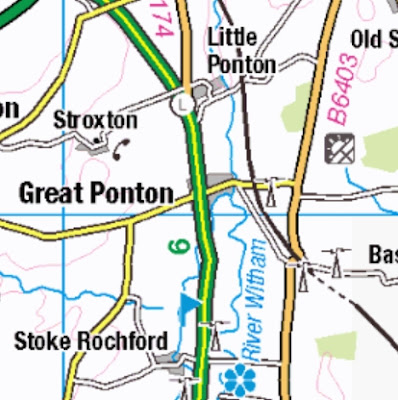 Once upon a time, the A1 (Great North Road) ploughed plumb through the middle of Grantham. 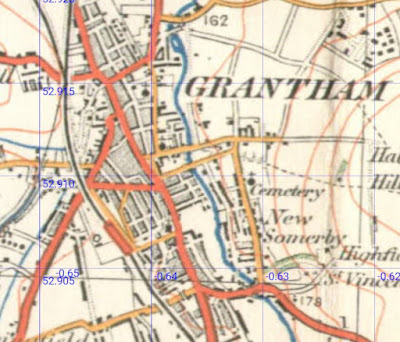 The road is still there (ORANGE) but with an A1 by pass to the west ... 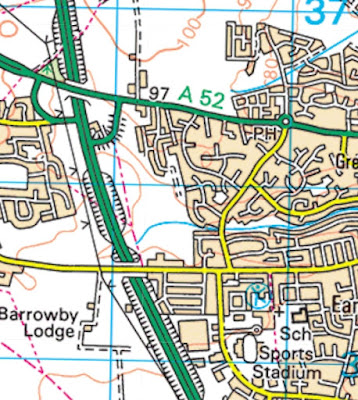 ... and with today's A52 through traffic diverted "round the back" past the bus station (GREEN). 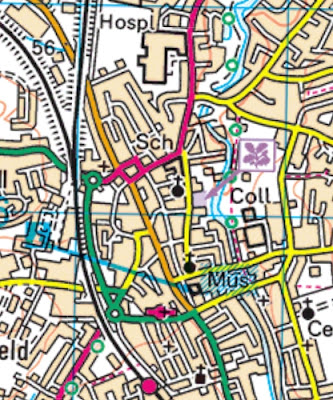 The former A1 should be a pleasant town centre road ... 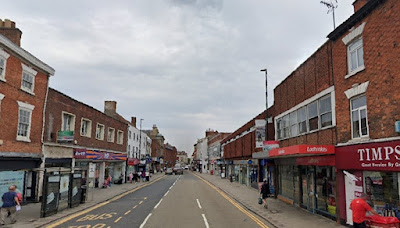 ... which, fortunately, steers away from some of the more quaint back lanes of the town! 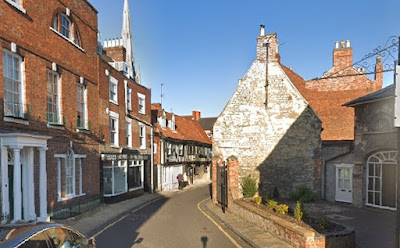 But, as correspondent Julian reported in respect of the non cross town route 1, it still gets very clogged with traffic. 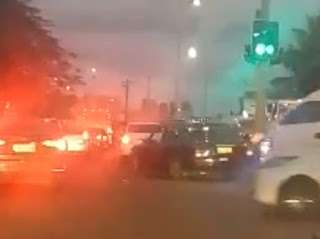 So it is that the super by pass joins the original line of the A1 at Little Ponton - well sort of. Here a Centrebus vehicle is about to join the A1. 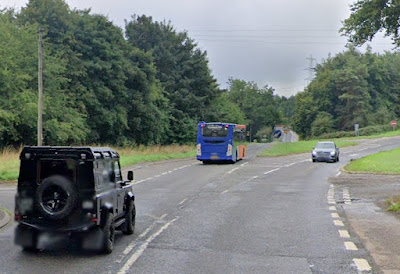 The lane on the left leads to the non-event settlement of Little Ponton ... 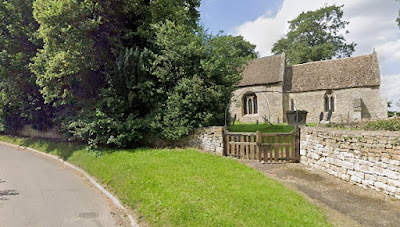 ... which, historically, owes its existence to the "big house" of Little Ponton Hall. 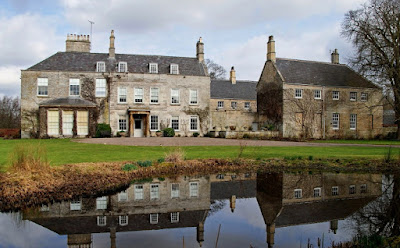 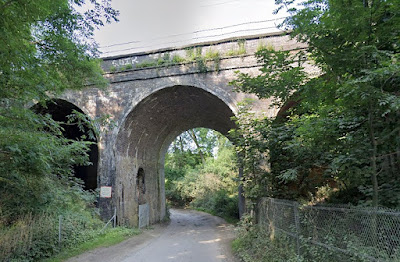 According to Google Maps, Centrebus 28 stops at those crossroads, as we can tell from the stop poles, flags and laybys provided ...

... NOT!
A little bit further south and now actually on the A1 is Great Ponton where the hapless residents have a footbridge to help them hurry across the dual carriageway. 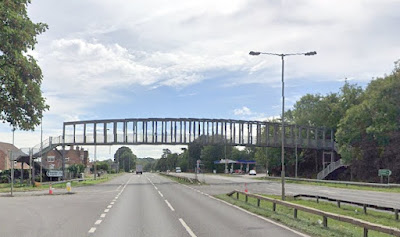 Here Google Maps shows a southbound stop on the A1 and a stop in the village ... 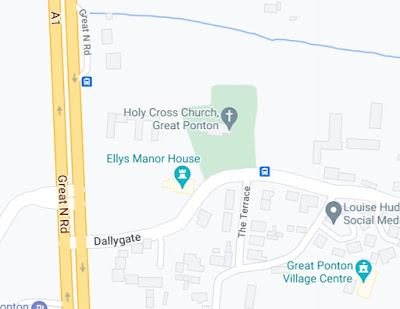 ... also apparently for southbound passengers only. Both are unmarked "on the road" and there is no obvious stop for the poor people of Ponton who wish to potter north to Grantham.
What does the 28 timetable tell us? Centrebus' on-line timetable isn't much help. Southbound it calls at Little and Great Ponton but doesn't give us any detailed stop names. 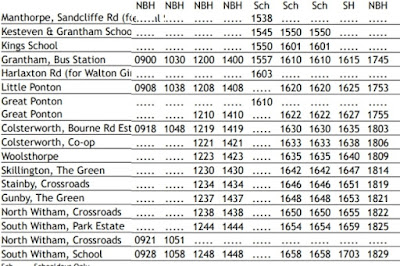 Does that school bus at 1538 from Manthorpe go to a different part of Great Ponton? And the first two journeys omit Great Ponton completely - and there are TWO "North Witham Crossroads" stops - perhaps.
Traveling TO Grantham, however, things look bleak for the folk of Great Ponton. 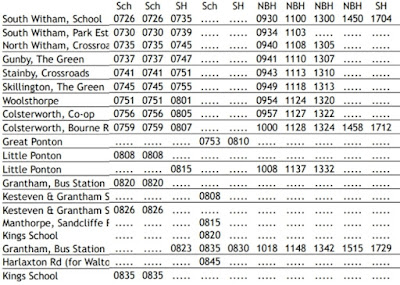 They only have a school time bus at 0753/0810 and nothing for the rest of the day. Do they have to walk all the way to one or other of the Little Pontons? And if so which one?
And there are two bus stations in Grantham as well!
What does the excellent (maybe not for the 28?) leaflet say (extracts only).
Southbound from Grantham ... 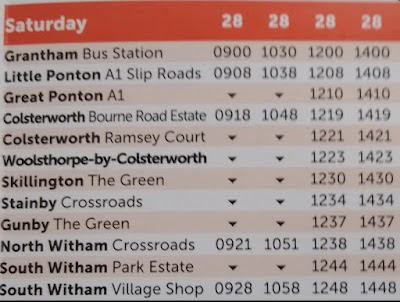 Again some buses manage to miss out Great Ponton; but Northbound ... 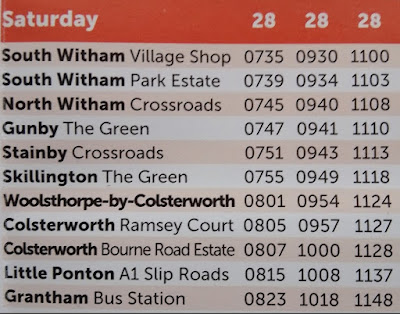 ... Great Ponton doesn't even deserve a point time.
Dare one look at Traveline? Risky, but here is southbound (extract only). 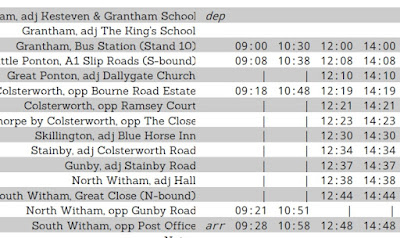 Progress, of a sort! We now glean that the Great Ponton stop is the one IN the village by the church ... 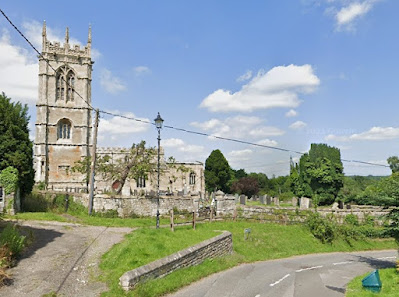 ... somewhere (?) and that the North Witham stops are different places! Possibly?
Then we turn to Traveline northbound. 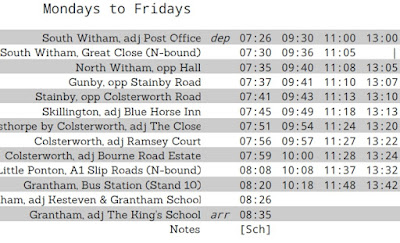 Sadly, still no buses from Great to Grantham. Not so great?
One last try! How about the Traveline all stops timetable?

Nope! There would appear to be no way for the crowds of excited Christmas shoppers to catch a service 28 from Great Ponton to Grantham. It cannot be done.
It hardly seems worth it to have a southbound stop if you cannot ever escape omnibologically to venture north to the "big city" of glorious Grantham.
But Lincolnshire's County bus map shows Great Ponton as a stop, presumably in both directions ... 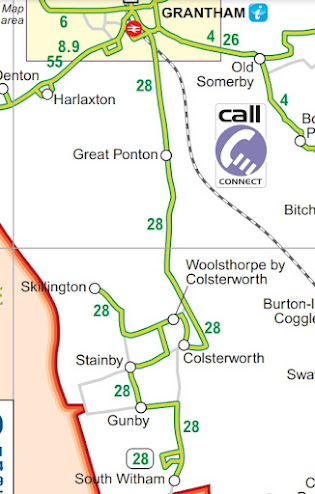 ... but the Centrebus map (generated from the computer data), is just plain confusing. At first it looks positive for Great Ponton ... 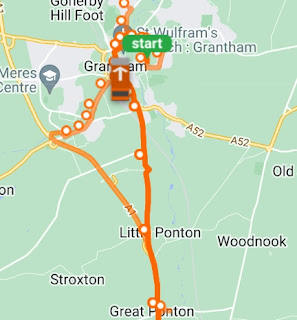 ... but an enlargement shows the southbound only stops as before. 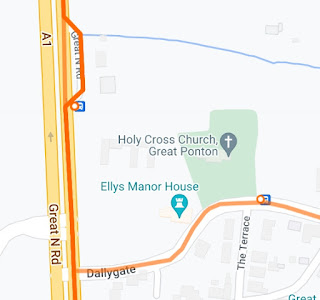 Note that some buses run via the layby on the A1 (seen in all its nothingness below) ... 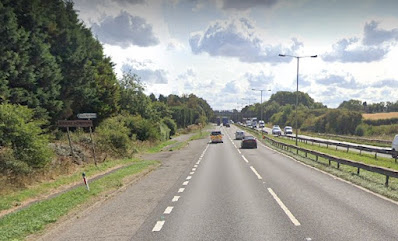 ... and some don't.
Maybe there is an explanation, but fbb cannot fathom it.
One of the (many) reasons for the decline in bus travel, especially in rural areas, is that the operators seem totally incapable of telling their passengers where the buses stop, when they leave and when they get there.
But, it is all on line/
Centrebus is one of the better boys - but the 28 timetable is grim!
Of course it is compiled by a computer (Omnitimes) so Q E D!
===================================

Advent Calendar Day 4
Doomed Defiance
Nobody in their right mind believes the story of Adam and Eve, surely? 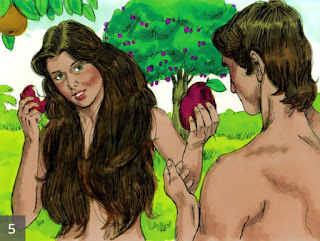 Well, they certainly didn't look like the above - clean, groomed, Caucasian "beautiful people". They were probably swarthy, weather-beaten, tanned, hairy, very smelly and short in stature. 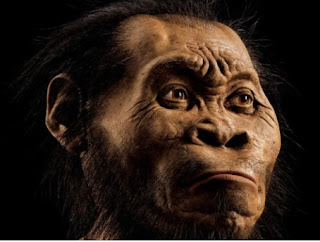 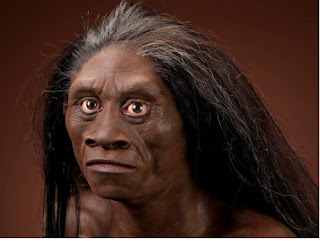 The fact is that every one of us is descended from a "first woman" and a "first man". It would be hard to prove (genetically, anthropologically) that proto-man and proto-woman (Adam and Eve) lived at the same times - but it is not an unrealistic guess.
But whether you take the story literally, poetically, philosophically or morally the meaning is the same.
God creates Perfection
God gives mankind free-will
Mankind disobeys God
Perfection is spoiled until ...
Mankind is reconciled with God
So, we hear many cry, if there is a God, why doesn't he get rid of all the bad things in the world?
So when we tell a lie, God destroys us? So when we blaspheme (oh my god) he destroys us? So when we say something designed to hurt others, God destroys us?
Or do we want God only to destroy the Vlad Putins of this world and leave us to continue messing up His world?
Would that solve it?
Its not quite as easy as we might think. One way would be to leave us in a broken world and give us all the help and encouragement we need to do things God's way? 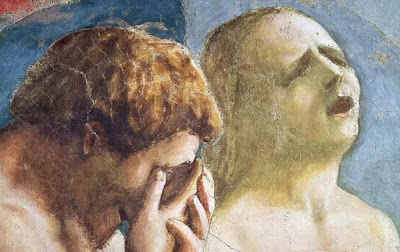 A tough call all round!
The story of the "forbidden fruit" (it never was an apple) is below, in slightly abbreviated form, for those who may wish to refresh their knowledge.
Making Progress 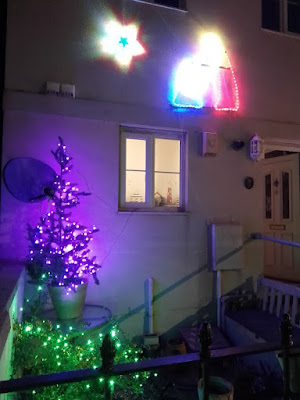 Unfortunately, fbb's phone camera over-reacts to white light which bleaches out the colours of the star and the nativity scene. But it looks good from the street. The cross is still to come.
===================================
Next Variety blog : Monday 5th December
Now the snake was the most cunning animal that the Lord God had made. The snake asked the woman, “Did God really tell you not to eat fruit from any tree in the garden?”
“We may eat the fruit of any tree in the garden,” the woman answered, “except the tree in the middle of it. God told us not to eat the fruit of that tree or even touch it; if we do, we will die.”
The snake replied, “That's not true; you will not die. God said that because he knows that when you eat it, you will be like God[a] and know what is good and what is bad.”
The woman saw how beautiful the tree was and how good its fruit would be to eat, and she thought how wonderful it would be to become wise. So she took some of the fruit and ate it. Then she gave some to her husband, and he also ate it. As soon as they had eaten it, they were given understanding and realized that they were naked; so they sewed fig leaves together and covered themselves.
That evening they heard the Lord God walking in the garden, and they hid from him among the trees. But the Lord God called out to the man, “Where are you?”
He answered, “I heard you in the garden; I was afraid and hid from you, because I was naked.”
“Who told you that you were naked?” God asked. “Did you eat the fruit that I told you not to eat?”
The man answered, “The woman you put here with me gave me the fruit, and I ate it.”
The Lord God asked the woman, “Why did you do this?”
She replied, “The snake tricked me into eating it.”
So the Lord God sent them out of the Garden of Eden and made them cultivate the soil from which they had been formed. Then at the east side of the garden he put living creatures[g] and a flaming sword which turned in all directions. This was to keep anyone from coming near the tree that gives life.
Posted by fatbusbloke at 02:00