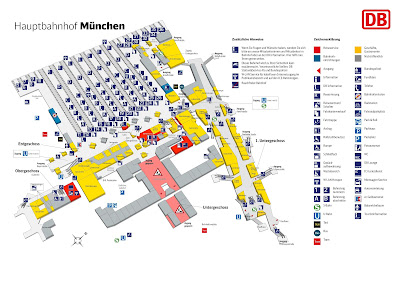 Too late to assist No 3 son in the bewilderment begotten by his brief nocturnal excursion, fbb has tried to grasp something of the complexity of Munich Hauptbahnhof by unravelling the rather befuddling isometric diagram as shown (illegibly) above.
The main (and thus simple!) underground access is on the south flank of the station. If we wander away from Stationplatz and turn right ... 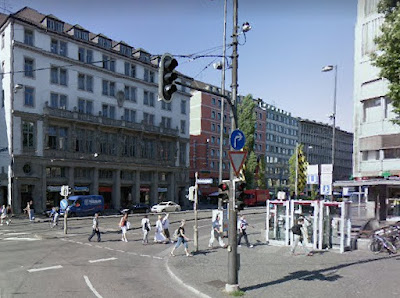 ... we may find our way to more tram stops and a side entrance to the main National Rail platforms. 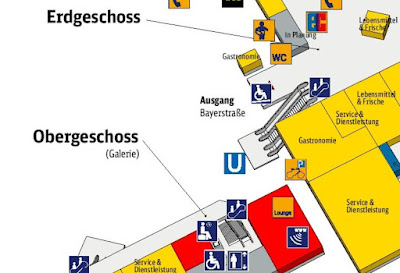 To add to our previously visited Untergeschoss, we now have an Erdgeschoss and an Obergeschoss. As part of the exit to Bayerstrasse, there is a bank of escalators labelled "U" - and that's a clue, too. 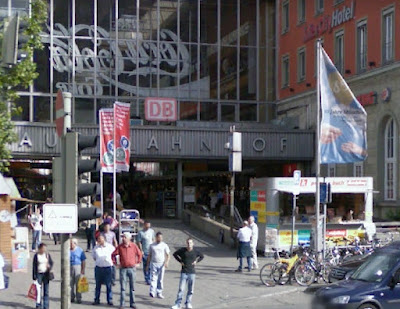 We join a series of video clips ... 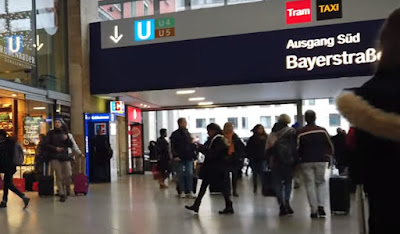 ... and descend to the nether regions. 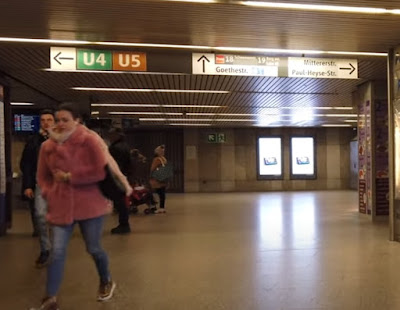 There are plenty of ways in (and out) via Nearby streets ... 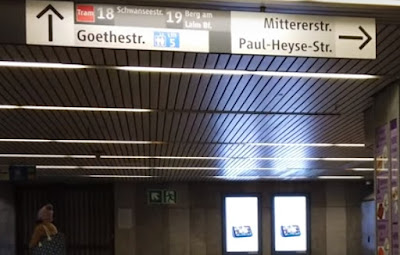 ... and to tram stops. But soon all sense of geographical direction seems to evaporate and we note that we are aiming at routes U4 and U5 via a further descent. 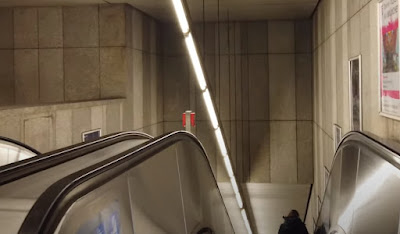 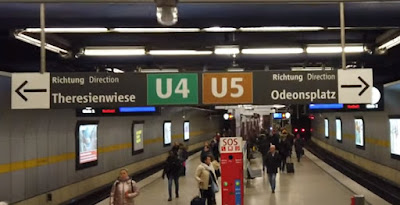 ... with duplicate structures for the other direction. 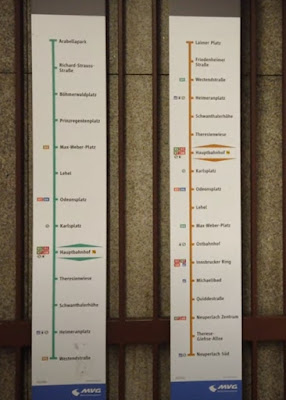 fbb often wonders whether giving London's Underground lines route numbers would be easier; certainly easier that the Elizabeth Line line label!
There are far fewer adverts that we suffer in London which makes the station tidier ... 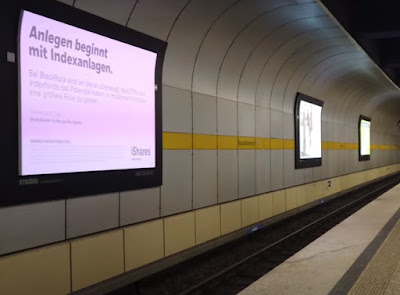 ... and, if you are bored whilst waiting for your train you can enjoy the video adverts that are tastefully spread out on the tunnel walls!
Our unseen video host then walks to the far end of the U4/U5 platform ... 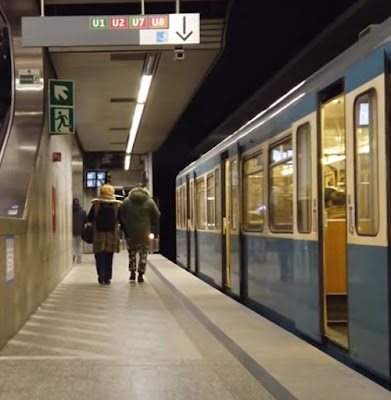 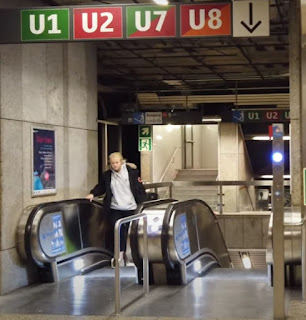 Leading to one more escalator ... 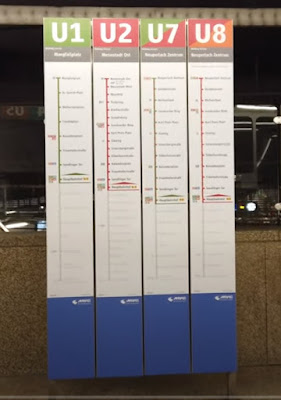 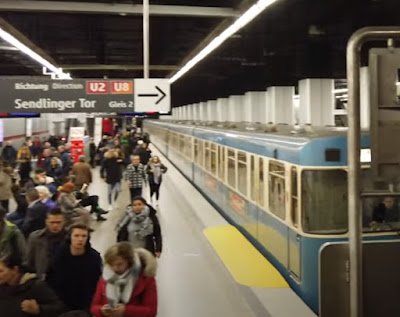 There are seats and snacks ... 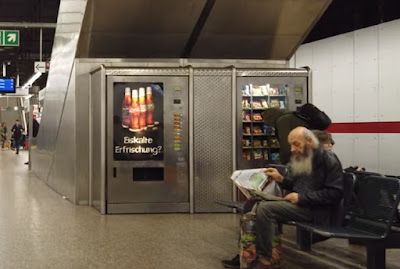 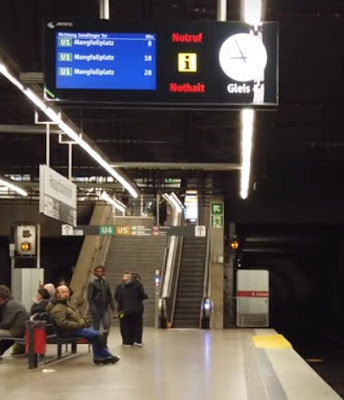 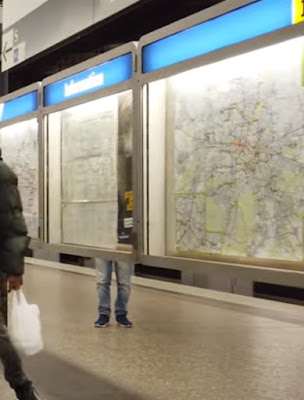 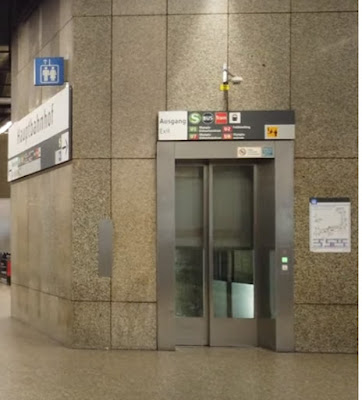 The overall ambience seems to be less claustrophobic, less threatening than on London's Underground stations. But then the U-Bahn came late to Munich being, effectively, only beginning in 1972. The pillars suggest "cut and cover" rather than tunnels (the S-Bahn is in tunnel mostly as it passes through the city). 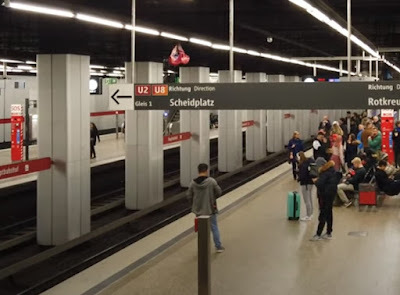 Below is the construction on line U3 in the late  1960s near the University. 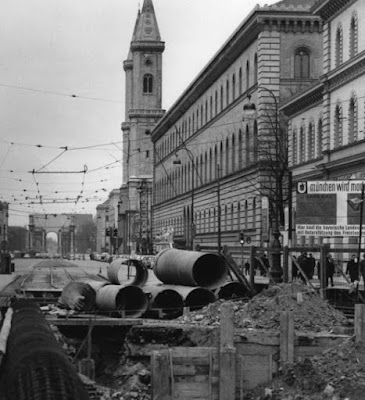 The arch in the distance is the Segestor ... 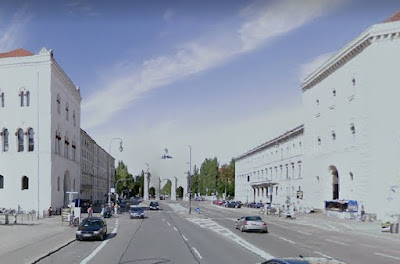 ... but somewhat different from today's picture of a similar area!
We can, perhaps, understand why our sense of direction evaporates at Hauptbahnhof when we see what the U-Bahn lines are actually doing! 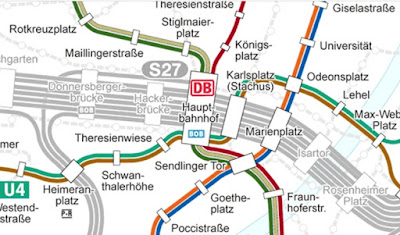 Ferroequinological spaghetti!
Even better, fbb found a geographical street map with an overlay of the U- and S-Bahn routes including stations, the latter also in their geographical alignments.
So here is Hauptbahnhof! 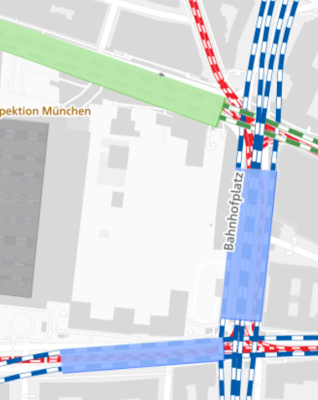 The U4 and U5 platforms are on the south of the main station building (big grey blob). At a lower depth and at right angles are the tracks for lines U1/U2/U7/U8 both in PALE BLUE. Then below these, again at right angles (roughly) and in PALE GREEN is the S-Bahn station.
It is really very, very simple! 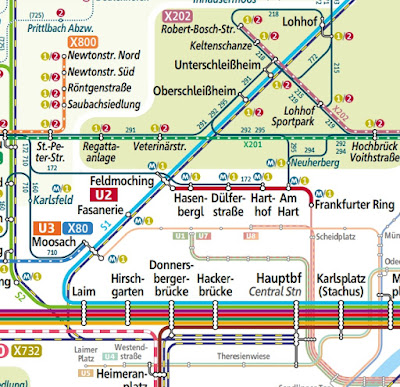 For the record, when the video was made, from which fbb culled the stills, there were only a few new Underground trains in evidence. Now there are a lot more! 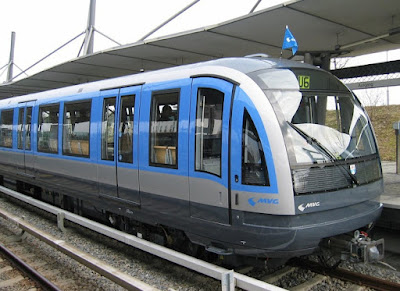 Most of the U-Bahn is, indeed, "U" but some lines come up for air at their expremities'. The U6 to Gersching runs in the open air for several miles (kilometres?), being almost rural in parts! 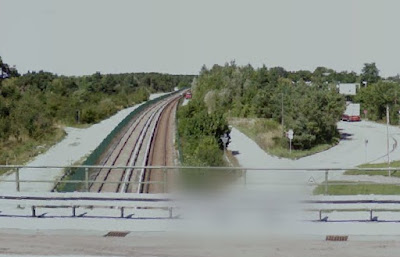 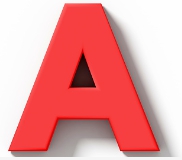 Advent Calendar Day 1
Attitudes to Advent
Christmas goes on far too long. When the original Church founders created the Calendar for worship, they started Christmas at midnight on December 24th and finished in 12 nights later.
But, to prepare for the festival, they instituted "Advent" which ran for four weeks up to Christmas Eve. The idea was to make yourself spiritually fit for Christmas, For children, calendars were later introduced with pictures of incidents from the Christmas story, one for each day until 25th. Again, it was to help the kiddies prepare properly for Christmas Eve and Christmas Day.
Now we eat a chunk of chocolate each day! 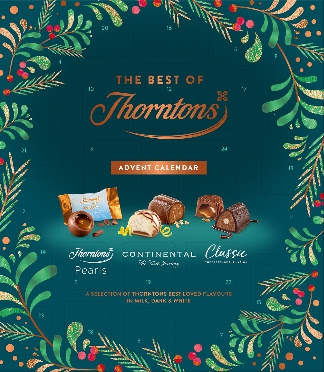 Mmm, Thorntons! Super Yummy!
Advent also sought to remind worshippers about the end times, when Christ would return and the whole world would be judged by his standards.
Oooer! Maybe not as jolly as we think Christmas should be!
"Do you want us to go and pull up the weeds (tares)?’ the servants asked. ‘No,’ he answered, ‘because as you gather the weeds you might pull up some of the wheat along with them. Let the wheat and the weeds both grow together until harvest. Then I will tell the harvest workers to pull up the weeds first, tie them in bundles and burn them, and then to gather in the wheat and put it in my barn.’” 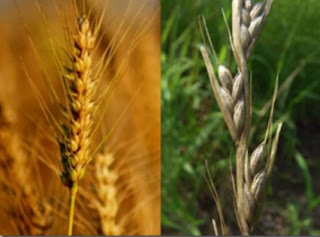