Other people have written software to create departure lists, but obviously NOT suitable for the GoTimetable data which is based on the concept, not of "the journey", but on "the timetable" which is loaded into the database as a lump. So let us look more closely at the challenges of 27, 29 and 29a.

Here, by way of reminder, is fbb's rather clunky map. 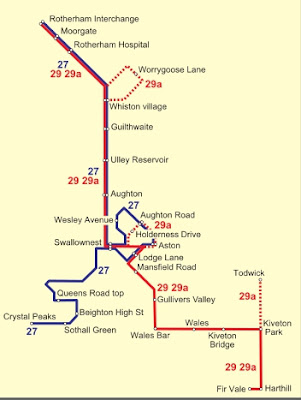 The acutely observant amongst our readers will have spotted immediately that there has been a change since a similar map was published in yesterday's blog. Yes, of course you did!

fbb had added Gullivers Valley, a newly opened kids theme park and "resort" (huts rather than hotels) which has just opened. 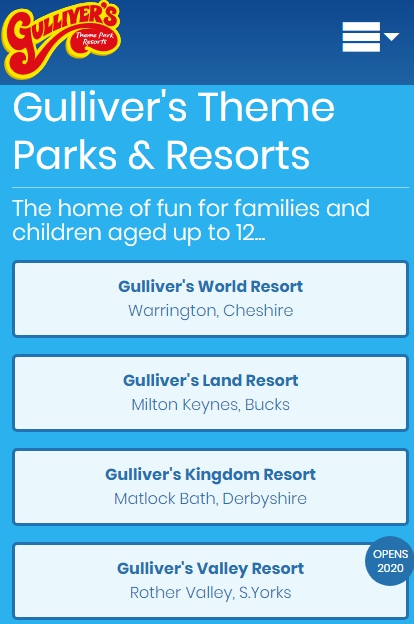 When the fbb's three boys were small and delightful, the family paid several visits to Gullivers Kingdom, then the only manifestation of Gulliver outside Liliput, Brobdingnag, Laputa and Houyhnhnmland!

It ought to be straighforward. First Bus operates an hourly 27 and an hourly 29 between Rotherham and Swallownest. After grazing outside the Co-op (left, in picture below) ...

The 27 (PURPLE) does a huge circuit of housing from Swallownest, via Aughton, Aston and back to "opp" the Co-op ... 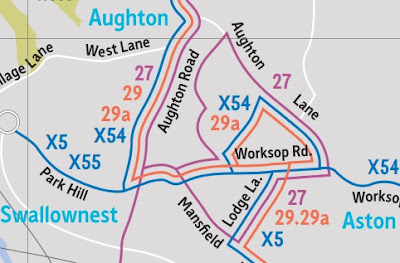 ... whence it sets off south again to find its way to the dubious delights of Crystal Peaks shopping centre. The route has two functions; it links most parts of greater Swallownest with Rotherham AND it gives those residents the opportunity to shop at Crystal Peaks.

The 29 (ORANGE) serves much less of the community, namely only the Lodge Lane area ... 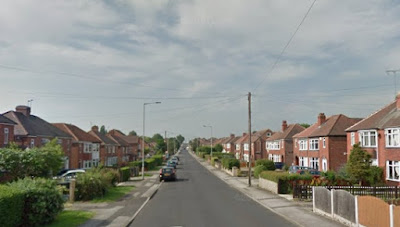 ... before nipping off to Wales, Kiveton Park and Harthill.

The X5 (BLUE) runs half hourly from Sheffield; the others (X54/X55) will pop into the story later.

First Bus shows the 27 and 29 on one table with the usual acres of blank spaces. 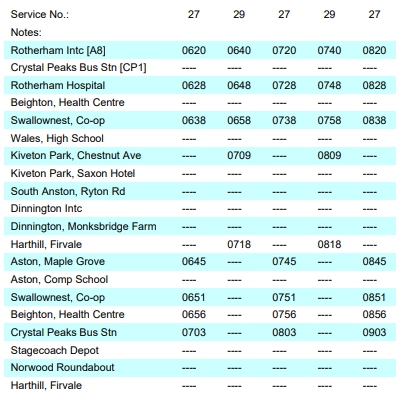 That enabled the 29a to be included with the 29.

Which is where the fun begins. Let's get note "A" out of the way. Pre cut-backs First 29s became First X54s at Harthill. 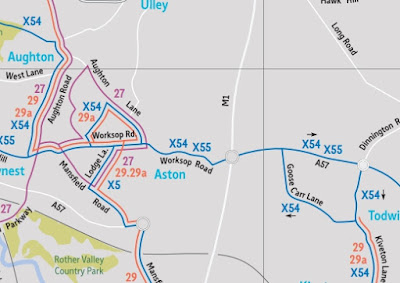 The X54 (BLUE) ran from Sheffield via Treeton, Aughton and Swallownest to Aston and Todwick and on to Kiveton Park and south to Harthill where its transmogrification to/from a 29 took place.

Except it isn't. For reasons best known to South Yorkshire PTE it still runs on Sundays but at no other time of the week ... 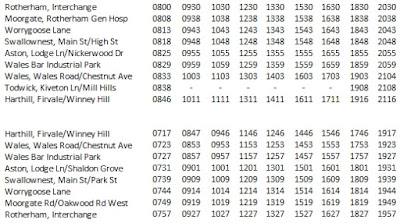 No mention of Todwick on most journeys. Here's how the Rotherham departures SHOULD be shown. 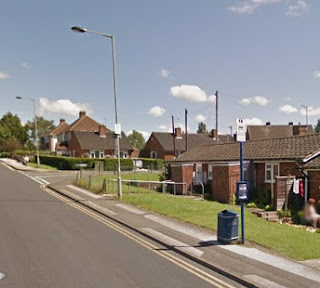 ... Nickerwood Drive being the turn off Lodge Lane as shown in the above snap. 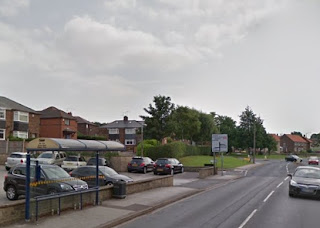 ... at a stop which in fbb's youth was called Kiveton Park Hard Lane and now is sometimes known as Saxon Inn.

We have First Bus timetables for the 27 and 29 which are correct but could be more helpful,

T M Travel 29a timetables which are incorrect,

TSY timetables which make a mess of combining the 29 ad 29a.

Fortunately we are spared the task of dealing with service 28 ...

But we cannot ignore Worrygoose Lane - yet another oddity on the 29a and one which was NOT present BC. 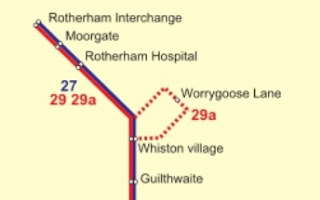 But fbb will save that joy for tomorrow. 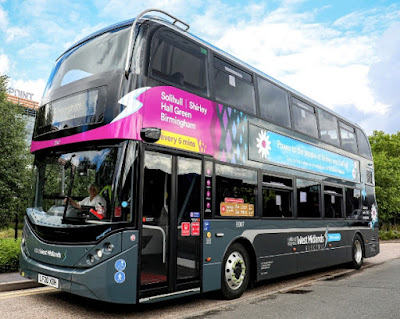 We are helping National Express West Midlands take its first major step towards a zero-emission bus fleet with the supply of 29 electric double deckers built in partnership with BYD Europe. 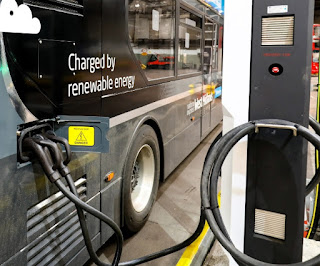 A stationery Zenobe Energy battery helps balance the load on the grid. 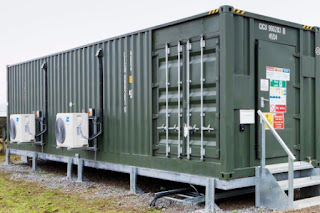 Leaving aside the fact that a paper battery might not do much good, are we to assume that a non-mobile battery pack is needed in case the National Grid runs out of juice?

Is this not just a bit worrying as we rush headlong into decarbonisation? 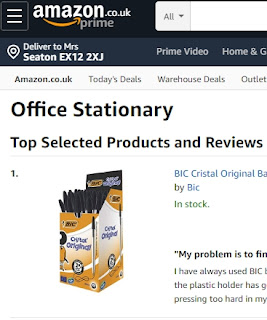 From First Bristol
Yet another new livery - branding for route 24 ... 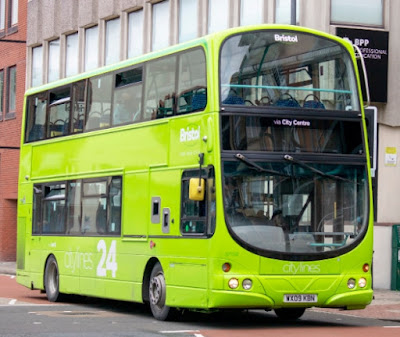 ... which runs from Southmead Hospital ... 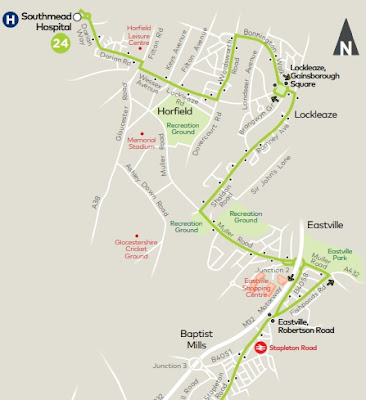 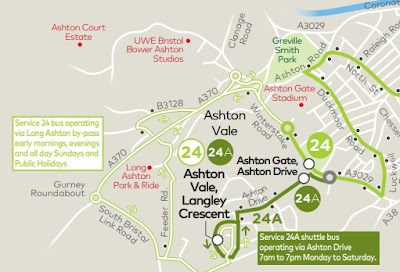 Looks like yet another complicated route for fbb to explore!

The bus certainly looks much better than its previous livery style. 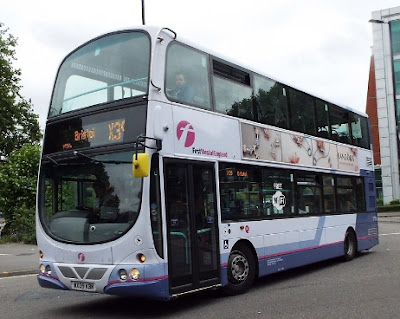 The new nearside has a selection of place names served by the 24 ... 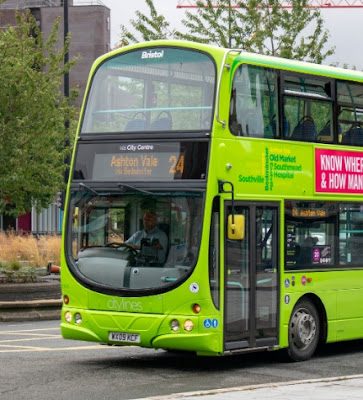 A triumph of Stenningitis over passenger helpfulness?

But it is better than the previous effort at branding ... 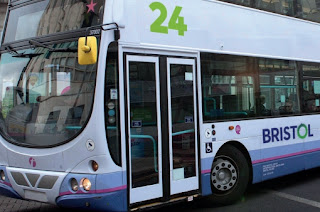 ... which probably did not create a lot of desire!

The Great Carriage Shed Rebuild.
As half expected, the windows are too big, so one line of pains needs to be removed. A bit of a pane, but the result is in better proportion to the building as a whole. 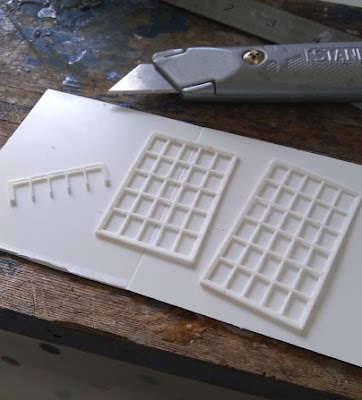 Now comes the hard bit - cutting neat and accurate holes that are the right size in which these beautiful windows can sit prettily. fbb is terrified he will mess it up.