A Coloured Route That Leads From Leeds (2)?

This blog explains how one organisation is aiming to:-

Sorry, but such ideas are unknown to the SYPTE - hence the health warning.

The initiative under review comes from a similar organisation a few miles north via the M1 ...

So here is the introduction to the document.

We would like to share with you our plans to improve the information you use to plan journeys and use the bus system around Leeds. We want to make it easier to plan and take bus journeys by creating a user-friendly and accessible set of maps and new colour coded bus stop flags, shelters and other on-street infrastructure that link to bus lines across the city. We have created 13 bus lines that group together existing services to help you easily navigate the core bus network and get you from A to B.

These improvements are planned on the core bus network for stops with services that run at least every 15 minutes or serve key destinations.

We've created a trial bus stop in the city centre to show you how our proposals might work. 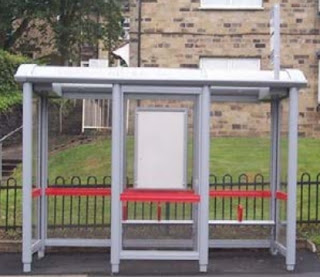 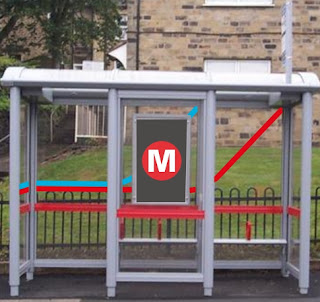 No great excitement so far. P.S. The shelter above is NOT at Wade Lane, unless there has been some recent building of repro old properties!
THE REAL WADE LANE STOP 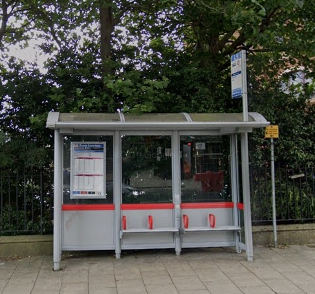 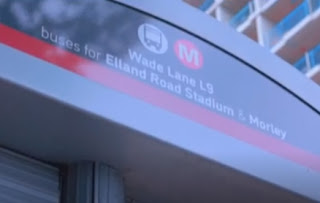 The stop is getting a coloured band. But there is even more. 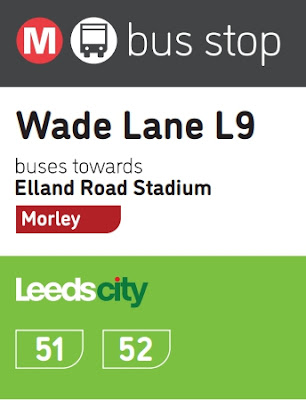 There is a redesigned bus stop flag - also incorporating a red flash, the operator name (that's First Bus in a heavy disguise) and the appropriate route numbers on a strange shaped white outline. 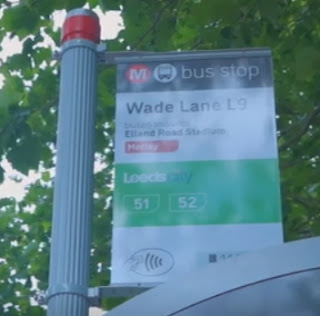 Back to the introduction.

What are we doing?

We are creating a package of wayfinding maps and enhancements to bus flags and bus shelters that reflect the colours and names of the bus lines across the city. These improvements are planned for stops on the core bus network with services that run at least every 15 minutes or serve key destinations.

This map is an easy to use map of the core bus network across the city. It includes named and coloured route lines to help you find which bus you need to take to get from A to B. The map will be displayed at key locations across Leeds and in most bus shelters on the network.

Sounds a jackpot idea! Let' s look at the map. 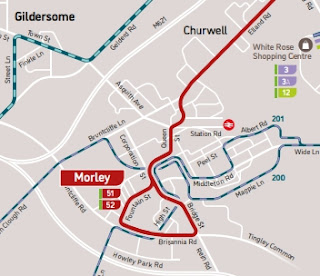 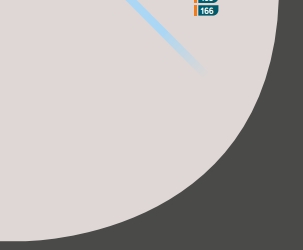 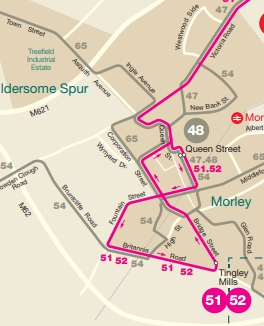 ... and it also shows an extra one way squiggle via Queen Street which isn't on the new PTE version. Back in Overground days the 51/52 were an near anonymous grey and not given a "line" name. 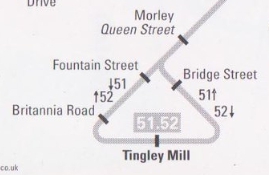 So will First have to change its map? And if so what about the other end of the cross city 51 and 52? 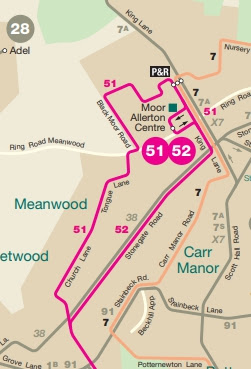 In the PTE's "cunning plan" Moor Allerton is part of the Meanwood "corridor" ... 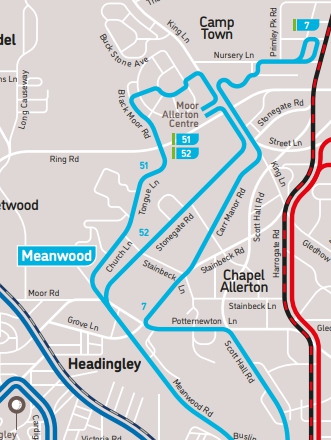 Aha! An answer. When a 51 gets into the city centre from Morley a bevy of First Bus staff whip out their step ladders and paste a CYAN wedge over the RED before the bus zooms northwards via Meanwood.

Actually, fbb doesn't think that the 51 and 52 are equipped with buses adorned with coloured wedges, but he does know that red-wedged green buses ... 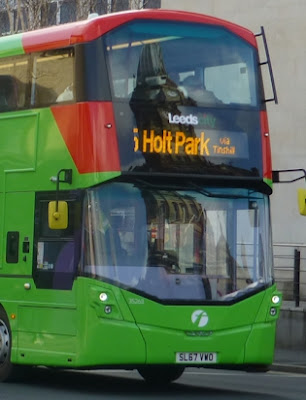 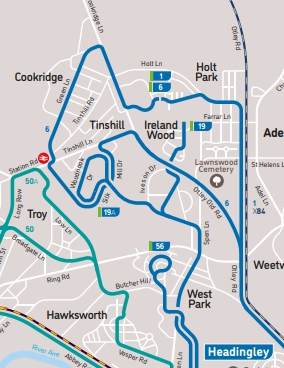 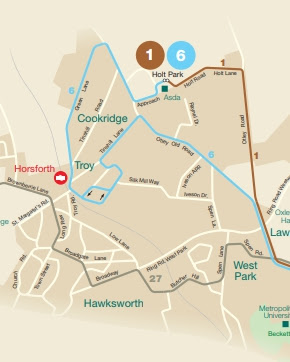 We are, probably, in a position to summarise.

Three sets of colours are either in use or proposed for Leeds City bus services. They are, in order of old age ...

... and they all use a different palette of colours.

And then there is the City Centre. Like most tourist-conscious communities, Leeds had designated a series of "quarters" in a valiant attempt to define various chunks of the city centre. 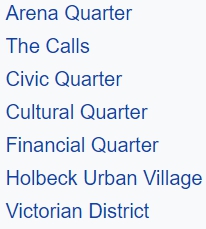 Leeds doesn't have one obvious "centre" - not unusual for large conurbations - but it does make defining bus stops somewhat challenging.

So the PTE has had another jackpot idea. Split the centre into a series of "zones" and define bus stops with reference to those named blocks of roads.

Generally speaking, the names bear no resemblance to the "quarters"above ... 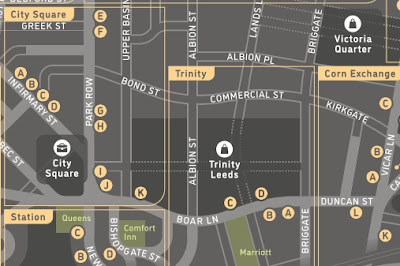 ... but they are used in the stop names. (click on the graphic below to enlarge it)

Note also that more routes have joined the corridors, namely out-of-town services like Arriva's 254 and 255 to Cleckheaton and beyond. These have been branded, at one time, with a yellow stripe ... 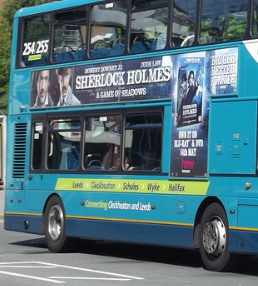 ... more recently with a purple splodge. 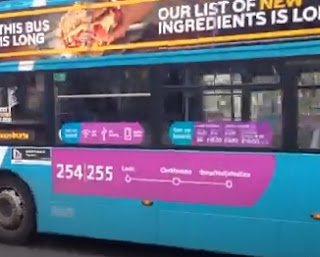 They run at a combined 15 minute frequency to Cleckheaton ... 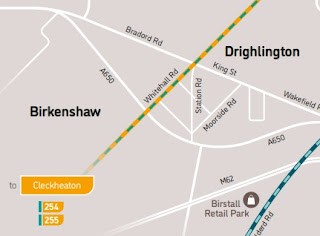 ... but have unexplained blue dashes mixed in with their yellow (gold?).

On balance, fbb would prefer to see the colours at the city centre stop blobs - ot would that be too much and too dotty?

Of course, the map has a well "designed" rounded corner ... 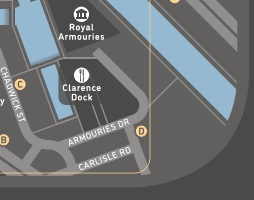 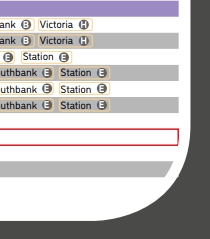 And, talking of the stops list, why is Dewsbury Road not in alphabetical order? Maybe somebody forgot it!

Before committing to this plan, fbb suggests that the PTE people might have a chat to the First Bus people about colours and cross-city services.

One departments of First talking to another department of First - now there IS a novelty!

Overall, however, with consistency and if FULLY implemented, the PTE's plan has much to commend it.

Teacher says "A good idea and well presented but more work needed on the detail." And PLEASE, larger print on the bus stop flags so that we can see them!


Next mixed-bag blog : Saturday 25th July
Posted by fatbusbloke at 02:00