The BBC has been quick to report on a Virgin Trains press release revealing some significant statistics from their London to Glasgow service. 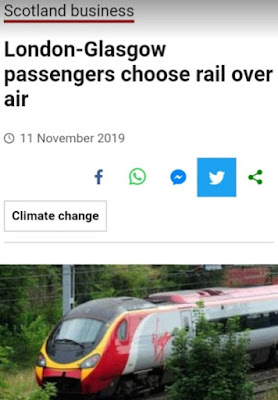 Of course, these "statistics" are generated by Virgin Trains themselves and could be difficult to verify, BUT, it does appear that many folk are turning from plane to train for this particular journey. 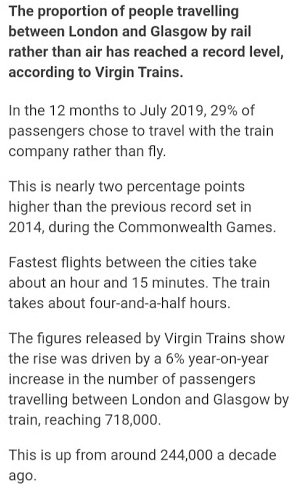 The item above reports that flights take one hour 15 (more likely one and a half hours) whereas the train takes four and a half. But that is an unfair comparison. There are no trains direct from London Heathrow to the centre of Glasgow and no planes from London Euston ditto.

So how do you compare?

One one flight site the clever people at Virgin and slotted in an advert for the train ...

... offering cheapo fares! But of course, there would be restrictions on when you might be allowed to travel.

Things were different 40 years ago. The train was "old-style travel" and the plane would take the strain.

Imagine being able to turn up at the aircraft gate ten minutes before departure without a ticket and being guaranteed to secure a seat on the aircraft.

That may seem fanciful today – even if you had a ticket you wouldn’t even be able to go through security and would have been offloaded from the flight.

However, in January 1975 BA brought American style “shuttle” services to the UK.

Believed to be the first service of its kind in Europe, passengers travelling from London to Glasgow could turn up at the gate ten minutes before departure and be guaranteed a seat.

Not only that, if the flight was full BA would have another aircraft on standby. Flights operated every hour Monday to Saturday (every two hours on a Sunday) with a fleet of nine Hawker Siddeley Trident aircraft in a single cabin.

"The Shuttle" soon became "The Super Shuttle" in the face of competition from British Midland Airlines.

The (Super) Shuttle was heavily promoted as a turn-up-and-go service with a "hot standby" plane to take the overflow if the flight was full. 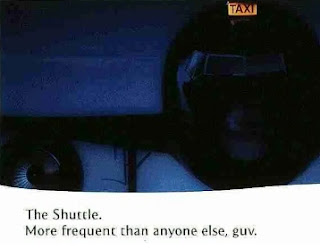 Here the implication is that the plane is, effectively, your taxi from London to Glasgow! Three other routes joined the service. 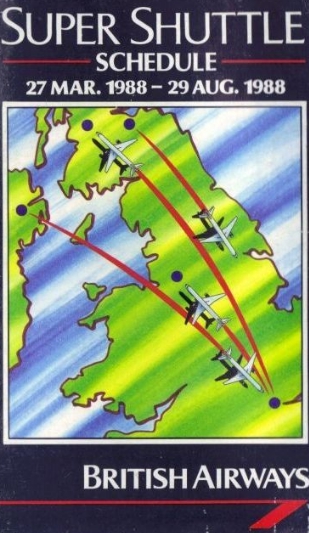 You could even get a shiny badge! 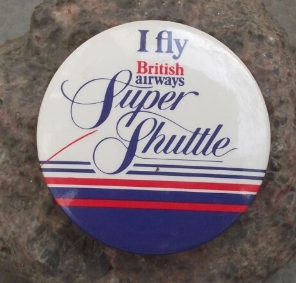 A timetable card was published and readily available ... 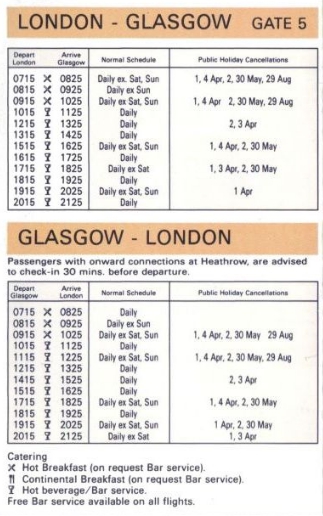 ... and fares were simple and straightforward. 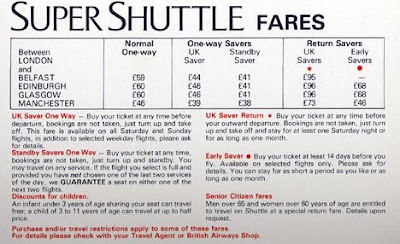 You really could (in theory?) turn up ten minutes before departure, buy your ticket and be on your way - refreshments included.
BA were only too happy to emphasise the limitations of the competition!

And with service like this you were bound to take the plane!
You can see that flying was deemed to be superior to the humdrum hum and drum of the train!

fbb once shuttled from Manchester to Heathrow. He was booked to Southampton but had ages to wait, so (on company expense account!) enquired about travelling via Heathrow, bus to Woking and train. All booked and sitting on the plane in 15 minutes. His small bag of smalls was last on the conveyor and the plane was on its way.

He avoided an enjoyable three hours in Manchester Airport (!) and arrived back on the Isle of Wight two hours earlier than previously scheduled. (click on the graphic below for an enlargement) 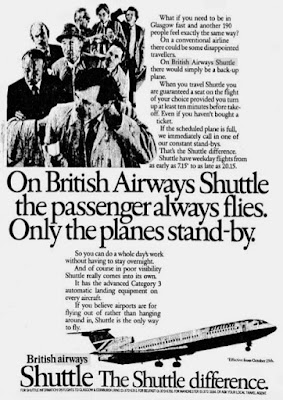 .At the time of the hourly Glasgow Shuttle, British Railways (remember therm?) were offering about eight express trains from Euston to Glasgow each day; not quite hourly.

Anyway, as a result of Virgin's recently published claims, fbb though he would take a look at the two modes to see how they really compare today.

... shaded pale green above, supplemented by nearly one an hour via Birmingham to either Glasgow or Edinburgh with appropriate connections at Carlisle.

The next task was to find out what flights are available.

Oh deary deary me! What a muddle!

Meanwhile - it arrived on Monday. In a big box ... 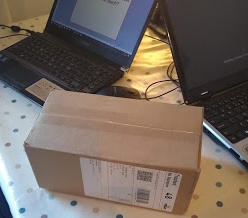 ... with loads of bubbly packaging. 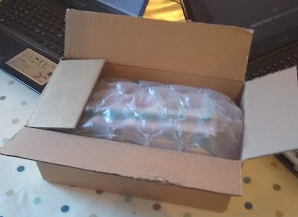 Deep inside was a tiny red and black box ... 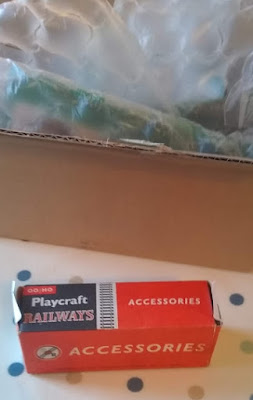 ... inside which was yet another tank wagon for the burgeoning fbb collection. 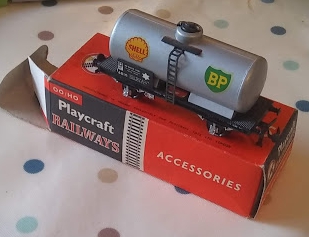 Now fbb had never heard of Playcraft Railways, so a little more research was needed.