In an article dated March 2017 Coach and Bus Week announced the arrival of Arriva Click in Sittingbourne. 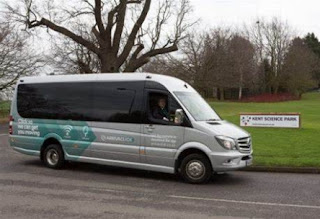 It all sounded rather lovely.

The ArrivaClick service, which uses five Mercedes-Benz Sprinter 45 minibuses supplied by EVM and London Hire, has been launched in and around Kent Science Park and Sittingbourne, though Arriva said it will widen the geographic area of the service in time.

The service was developed in partnership with US firm Via, which provides dynamic shared ride services in New York, Chicago and Washington DC.

ArrivaClick utilises a smartphone app to enable passengers to request a minibus from their pick up point at a time they want and to a destination of their choosing.

Their journey will then be matched with other people heading towards the same destination.

Once booked, customers are guaranteed a seat on the minibuses, which can accommodate 12 people. They are specified with leather seats, tables, USB charging points, free WiFi and electrical charging points.

The service began by offering rides between town/station ... 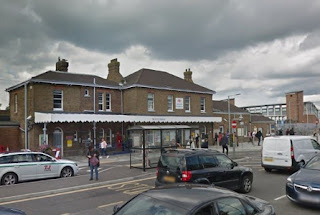 ... and the Kent Science Park, located somewhat remotely between the southern edge of town and the M2. 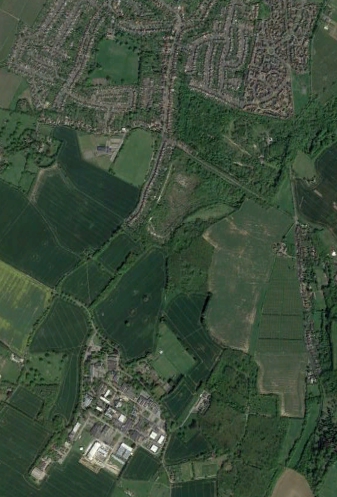 The service was later extended to cover the whole of the Sittingbourne area. 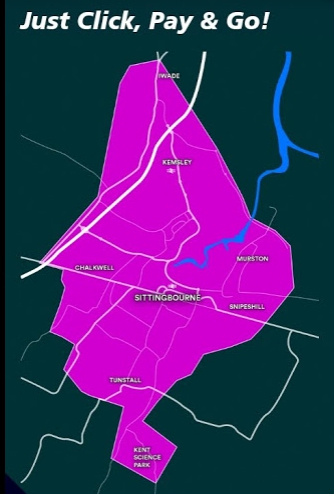 The service was completely withdrawn after service on Saturday 16th November. 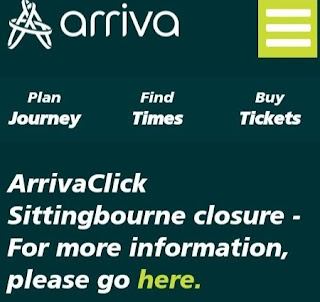 The ArrivaClick pilot in Sittingbourne has allowed us to better understand the demand for public transport in the Sittingbourne area and we have introduced a new 348 peak fixed route bus service that will serve the most popular part of the ArrivaClick route from the station. 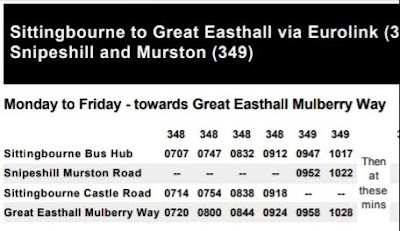 ... and serves NOT the Kent Science Park but the Eurolink Industrial Area north of the town centre. 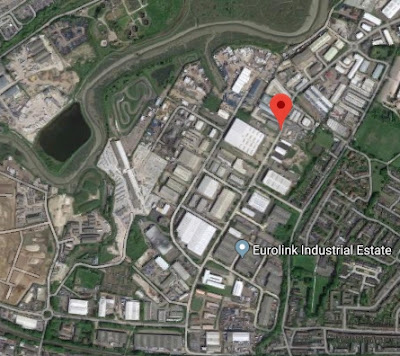 Blog readers are left to judge the success of Arriva Click in Sitttingbourne by the limited bus service introduced to replace it.

The closure led to a dilemma for blog writer Roger! 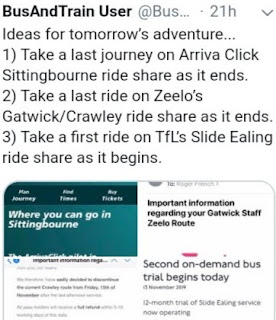 Zeelo, by the way, is also a ride sharing App using similar vehicles (apparently on fire!) ... 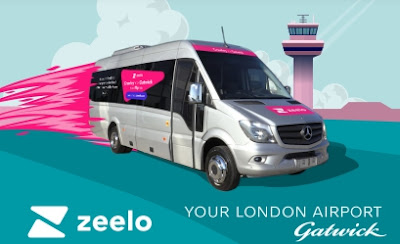 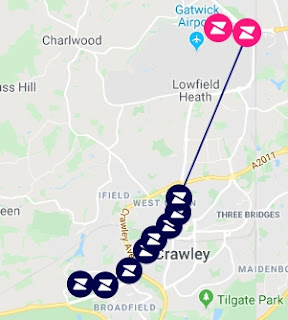 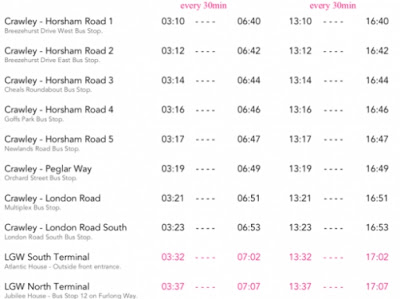 Zeelo is better known (?) for bringing together groups of people attanding sports events or concerts. 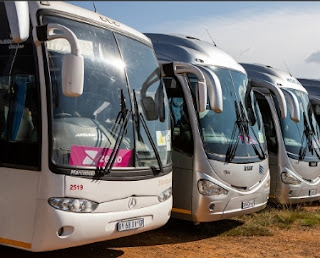 The Gatwick service, too, has closed - apparently - but is still being promoted on-line.

fbb thinks that it is fair to say the Uncle Roger, a retired bus managing director, is less than enthusiastic about the current "craze" for "demand responsive" minibus services. 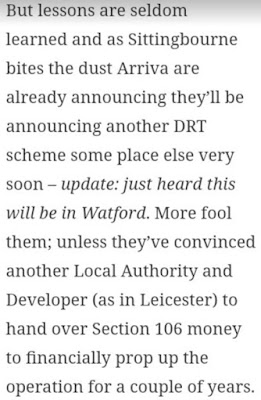 So Roger went to try Slide in Ealing. 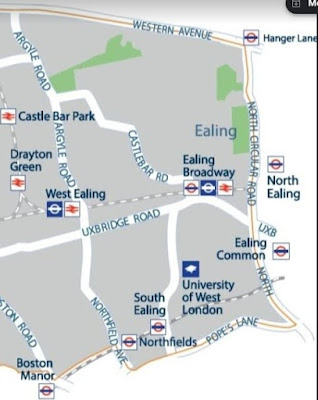 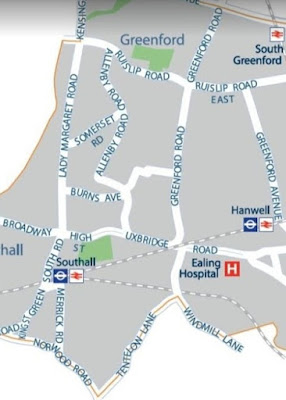 fbb has had to split Ealing down the middle to get a reasonable map in the blog!

Although it uses a different set of software, the broad principles are the same as the rest. You download the App, type in your journey requirements, pay by card and it all happens. 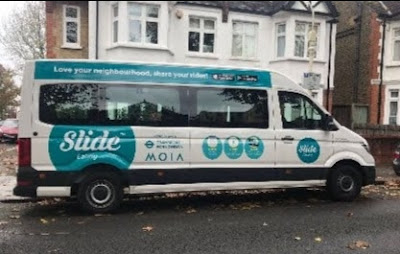 Like the relatively new Sutton scheme, OAPs travel free; so Roger's three journeys were in the form of a free taxi! Also, as in Sutton, you can book by phone.

Needless to say, Roger was the only passenger on all three trips. On one (at 1215) he was the first customer of the day on the driver's "early" shift. On another trip there had been one previous passenger.

Poor passenger numbers MIGHT be explained by the the fact that the service started last Wednesday with hardly any publicity. fbb could find nothing on the Transport for London site ./.. 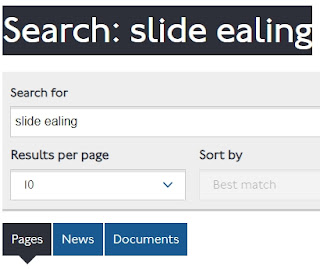 ... but "Slide Ealing" leads to a dedicated site. 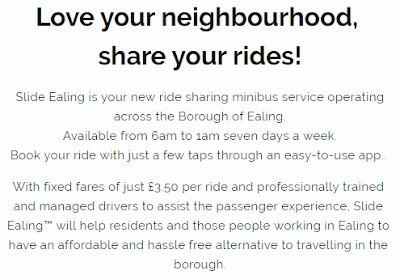 Roger found the service prompt, efficient and friendly - but with minimal numbers of passengers (and no ride sharing) it is much easier to operate smoothly!

His one concern was with the way in which stops are described. Roger was travelling between Stations but the stop names were obscure in the extreme. 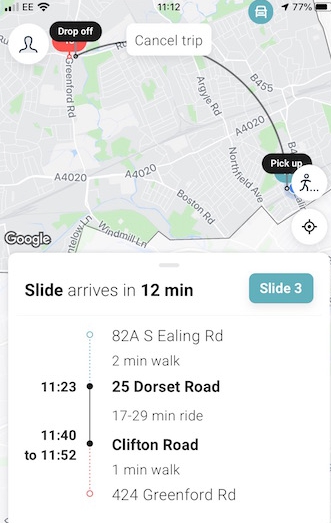 Surely the technology should be able to give more user-friendly destinations?

Arriva still operate Click services at Leicester and South Liverpool. Oxford Bus have their service running happily (?).
Roger thinks such services can never be commercially successful unless heavily subsidised - and he ought to know. fbb agrees.