No 3 son did just that a couple of weeks ago; he was intrigued by the idea of a tram that crossed national borders and decided to take a trip from Basel Switzerland to Saint Louis France on the recently extended route 3. 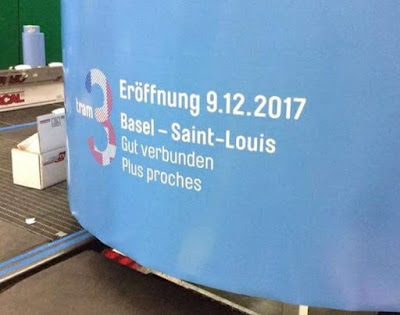 The new line opened on 9th December last on time and with appropriate ceremony. 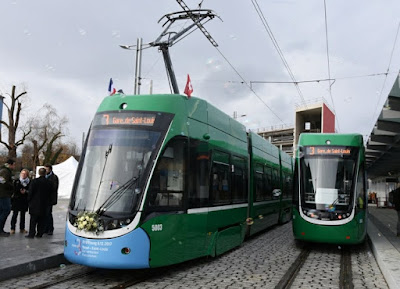 We will join the run, virtually, at the Burgfelderhof stop, located to the right of the rebuilt border post. 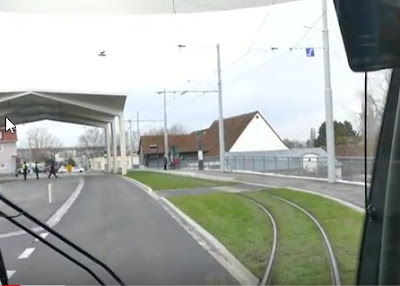 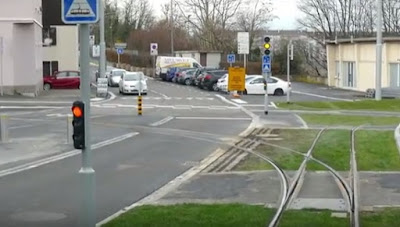 ... just past the turning loop. 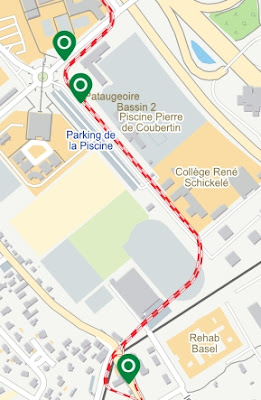 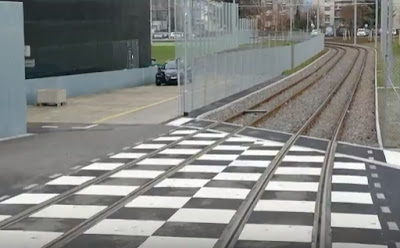 ... crossing some access points for industrial buildings. There was no road here before the tram was pushed through. It turns again to join the dead-end end of Rue Saint Exupéry. 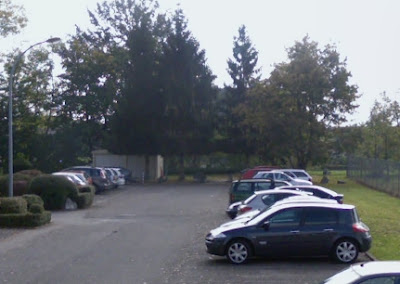 The track now bends round from the right past the sports field fence as we look back towards Switzerland, where the clump of trees marks the border.

Along this section, the road has been rebuilt and the tram uses its grassed reserved track as far as the Saint Exupéry tram stop. 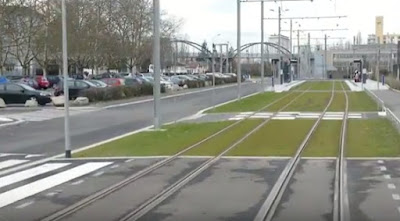 Another sharp right hander takes us past the bowstring footbridge which carries pedestrians across the junction, providing a link between the Lycée and its Sports Centre. 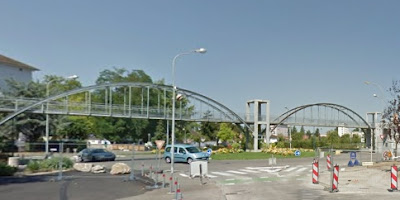 Another wiggle takes us into Rue Jean Mermoz ... 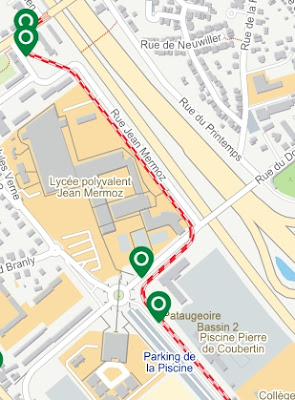 ... and past the mega-school on the left. 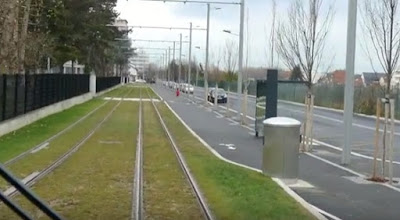 The stop named Mermoz is the first place, since leaving Switzeland, where we find housing. Here we can see the set-up using an architect's CGI aerial view. 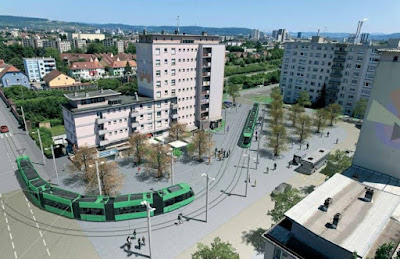 We now join the short stretch of street running past the Car Audio shop which fbb failed to identify on No 3 sons' puzzle picture.

The next corner takes us past the Géant Casino ... 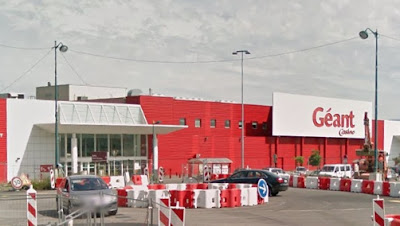 ... which isn't a casino but a supermarket. The stop is called Soleil ... 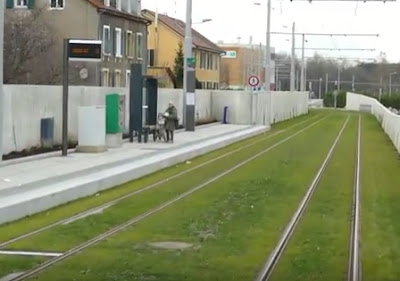 ... and we are soon in an "area of development" along the Boulevard de l'Europe. 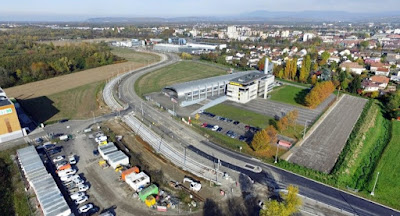 The silver-roofed building is the Fire Service HQ. The final turn right ... 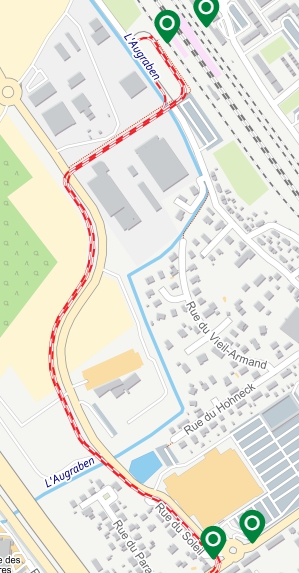 ... taker us down a heavily rebuilt link to the terminus. Here the whole road layout have been brushed away to make way for the tram, also obliterated is the car park as we saw yesterday. Here is Google's aerial view of the old layout ... 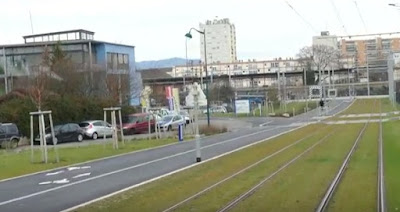 And the navetteurs français now have a stylish multi-storey car park to enjoy! 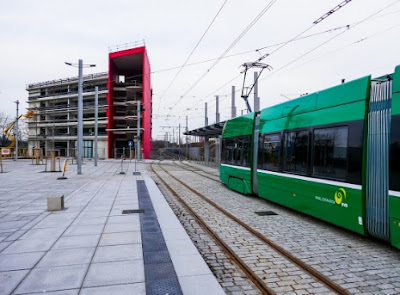 Trams run every 7/8 minutes as far as the Bergfelderhof border stop (note "C"), continuing every 15 minutes Monday to Saturday (every 10/20 on Sunday) to the new terminus. 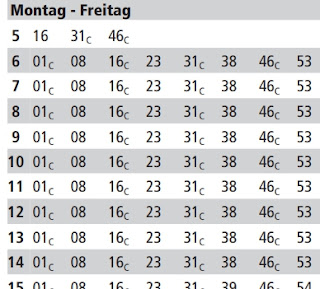 And, for completeness, a diagram of a typical seven-segment tram similar to those in use on line 3. (click on the drawing to enlarge it). 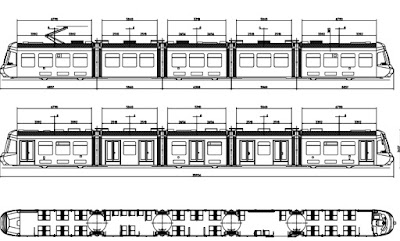 If you are visiting Basel, you can pick up a line 3 tram at Aeschenplatz, a short walk from the main railway station ... 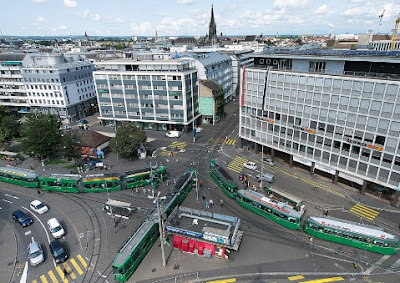 ... a location that is both terrifying and wondrous to see!

There is a 7 minute video on YouTube which is worth a watch. It was too big to download, so a link has been "embedded" in this blog - hopefully!


Note the cavalier way in which the residents of Basel, young and old, wander obliviously across the road in front of several tons of moving tram.

"Terrifying" says No 3 son who routinely endures the experience!

This is happening far too often!

Rumours are circulating that another bus company has issued redundancy notices to its drivers. G & J Holmes is based in Clay Cross, has a coaching business and runs several tendered (?) bus services in North Derbyshire. 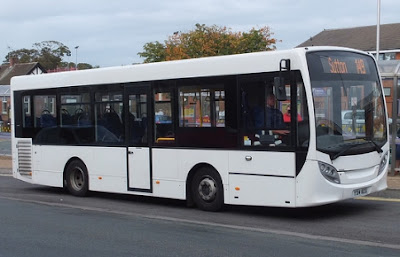 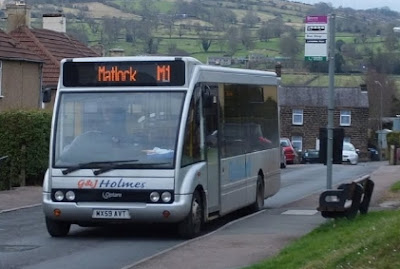