Branding to Befuddle? Or Simply Simplibus?

When bus operators introduce "an exciting new network", the motivation is usually to reduce costs and so within the novelty there will be service reductions to find. Often these are cunningly hidden behind new brand names and a new set of route numbers.

With the opening of the shiny new bus station in Lincoln, Stagecoach announced their supposedly shiny new network. fbb prepared himself for hours of patient research, comparing route with route, to work out what had changed and to guess why.

The on-line blurb looked like the usual "trade puffs".

From Sunday 28 January 2018...
simplibus
simple fares dayrider £4.20, megarider £12
simple routes all over the City
simple times from every 10, 15, 20 or 30 minutes
now up to 7/8 minutes to Birchwood
simple route numbers 1 2 3 4 makes using the bus simple for you!
Find out more about simplibus in Lincoln

Is there an increase in ordinary single fares? We are not told.
In what way have the routes been simplified?
Surely buses have always run at these intervals?
Aha! The Birchwood service used to be every TEN minutes
Were the original numbers very complicated?

simplibus | Lincoln
Why you’ll love simplibus
new Central Bus Station opening at 5.30am on Sunday 28 January 2018 located between the new Central Car Park and Lincoln Central Railway Station.
we've invested over £2 million on ten new buses with free USB charging and comfy high back e-leather seats
simple fares unlimited travel with dayrider, megarider and mobile tickets
simple routes all over the City and surrounding villages
simple times up to every 10, 15, 20 or 30 minutes
simple numbers from 1 to 19

The only "more" that this tells us is that the routes will be numbered from 1 to 19.

Fortunately Stagecoach has provided a list of the changes, all the new timetables, plus a new map.

Unfortunately, due to the exigencies of the situation for which an apology has previously been proffered, fbb was too frazzled with other stuff to remember to download the previous timetable set. BUT; he did make a list ... 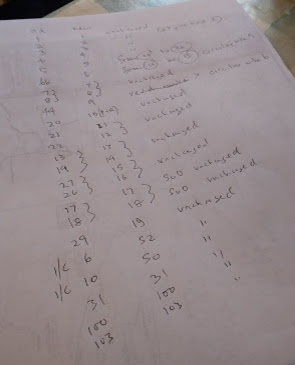 ... and download the old a new maps both of which were still available yesterday (1st Feb). 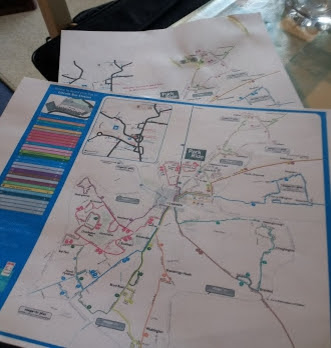 Sadly the old timetables vanished (quite rightly) after 27th January. fbb did check earlier this week ...

... 66 being the old number for the "improved" Birchwood service. Sadly the only Lincoln route 66 delivered by Stagecoach's poor web site was ... 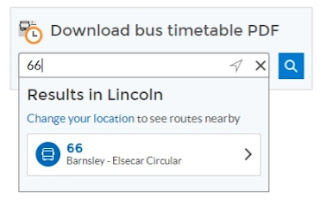 ... the service between those well-known Lincolnshire villages of Barnsley and Elsecar. 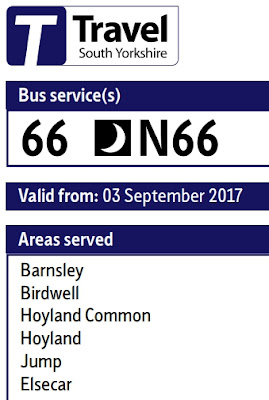 But slowly the addled brain of fbb began to realise that Simplibus was simpli the old network with a few different numbers.

Excluding those route number changes it became obvious that ONLY THREE routes were being Simplified.

The Simpliest change was to service 5. No change to route or number ... 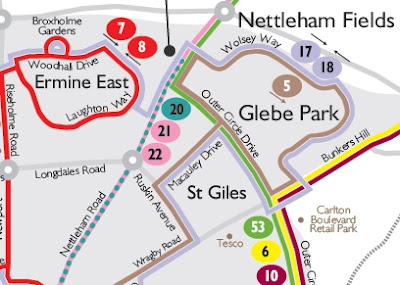 ... but the frequency is Simpli reduced from every 20 minutes to every 30. Before our eagle-eyed readers suggest that Glebe Park has the 17 and 17 as well, please note that these are Simpli "portmanteau" routes serving Glebe Park, Ermine East and (off map left) Ermine West. 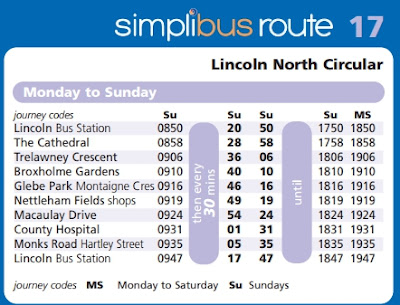 They run on Sundays only and haven't changed! No also that the 17 (and 18) serve the Ermine estates but, helpfully (?), that name is not used in the timetable.

Which leaves the 66, possibly increased to every 7/8 from every 10, and the 44; which become the 6 and the 9 respectively. Why not make the 44 into service 4? Aha! The Stagecoach planners have a cunning plan. 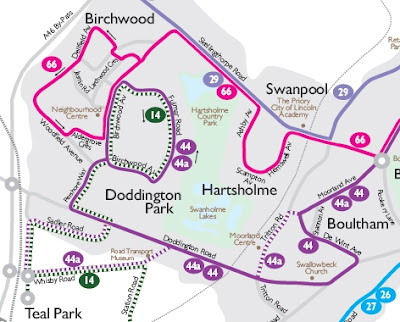 fbb did look up the timetables before they disappeared and, indeed, the 66 was every ten minutes and the 44 every 15. The 44a serves a warehousing/offices industrial estate ...

... plus a Sainsburys FROM Lincoln at morning peak, TO Lincoln in the evening rush hour. There probably isn't much of a bus "rush" at Teal Park!

The Stagecoach gnomes have turned this lot into a mega circular. 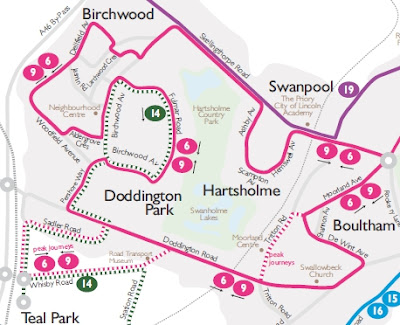 The 9 (formerly 44, every 15 minutes) is the "other way round" from the 6. Clever eh? fbb doesn't expect many passengers to appreciate the numeric subtlety. The 9 remains at every 15. 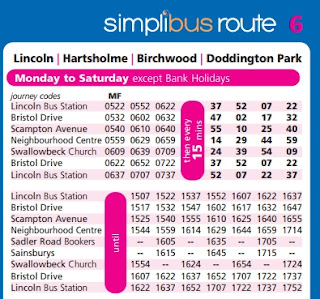 So, it is true, as Simpli announced, that Birchwood now gets a bus every 7/8 minutes rather than every 10; and it is also true that departures from the bus station and arrivals at the Birchwood Neighbourhood Centre ...

But folk travelling to or from Hartsholme, Skellingthorpe Road and the Western extremities of Birchwood have a reduced service because the "long way round" route 9 Simpli offers no benefits in arrival time.

In conclusion, whilst it is good, every so often, to have a tidy-up of route numbers, the new network offers very little change and some disbenefits for Glebe Park and Birchwood passengers.

Will Lincoln folk be impressed with Simplibus? Probably not.

fbb could not find anything obvious to explain whether fares had changed, but the emphasis on a "daily" or "weekly" fare in the promo would suggest that "ordinary" fares have Simpli increased.

Many moons ago, fbb visited Lincoln by train. Things have changed a lot since then.

Next Lincoln blog : Saturday 3rd February
Posted by fatbusbloke at 02:00