It was way back in 2012 that First Bus in Norwich brought our the brass bands, the dancing girls (inappropriate remark No 1) and flags of all nations to announce a revamped network.

Excited beyond belief by this positive publicity push by First, fbb used his blogging skills to review the whole network over several blogs. The two areas involved indirectly in the new X29 to Fakenham are Taverham and Thorpe Marriott (or is it Marriot) which sit alongside the A1067 between Norwich and Fakenham. 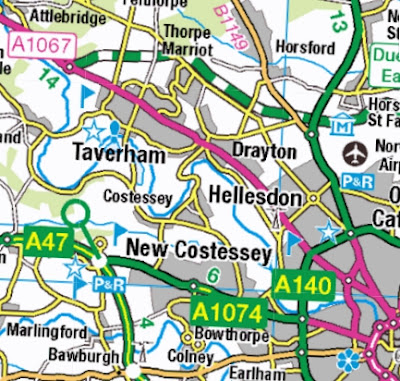 Before the COLOUR BRANDING, Thorpe Marriot was served by simple service 28 coloured YELLOW on the old network diagram. Taverham, presumably a source of fewer passengers, had to travel by a more roundabout route numbered 29 (PURPLE). 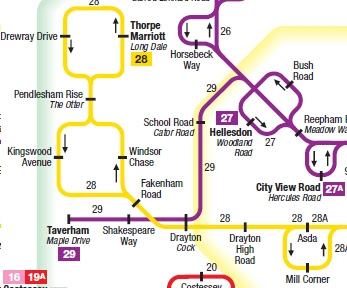 With the September 2012 changes, the loop via Mill Corner on the 28 was excised, but daytime Taverham journeys still followed a selection of indirect routes (29A and 29B). As a taste of things to come, however, some peak journeys ran direct via the main road A1067 as simple 29, Here is a timetable chunk from over five years ago. 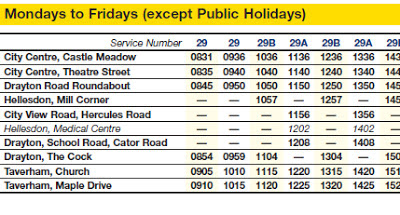 The network has not been static, however, and Taverham now had a 30 minute service direct, providing a bus every 15 minutes along the Fakenham Road.

Both routes run to Sandy Lane (on Fakenham Road at Taverham) ... 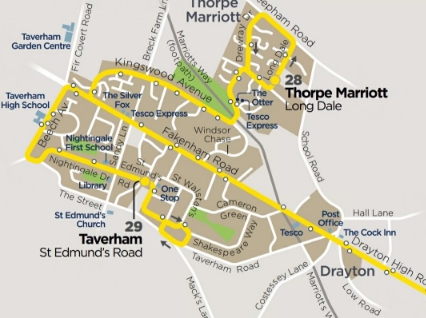 The 28 turns right into Kingswood Avenue ... 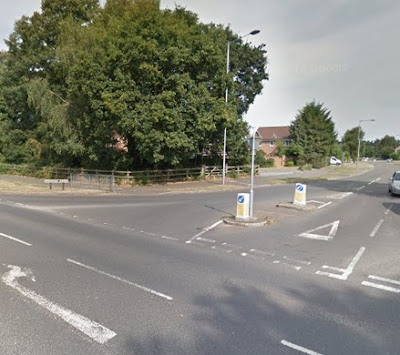 ... and wiggles to its terminal loop. The 29 runs on a bit further before hanging a left ... 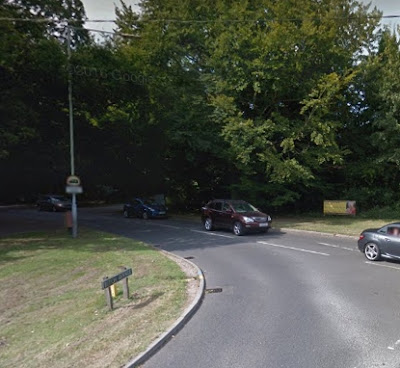 ... and serving a loop beyond Taverham shops every 30 minutes.. 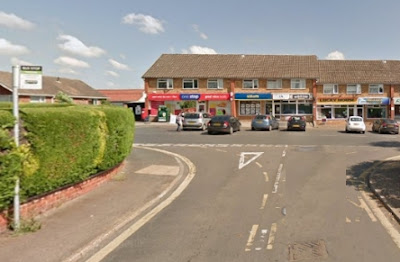 But First have hinted strongly that their new X29 will be one bus an hour extended from Taverham. Whilst the 28/29 YELLOW  timetable leaflet had not yet been reissued ...

... it is noteworthy that the Fakenham X29 journeys leave Norwich at xx50 taking the times of one of the 29s to Taverham. 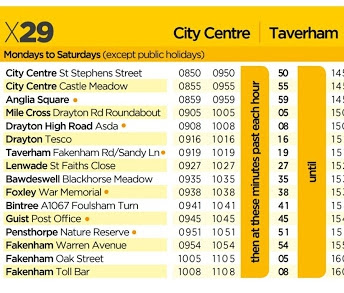 The return trip from Fakenham slots equally into the return path of the 29 two hours later.

Which means, of course, that the bit of Taverham off the main Road ... 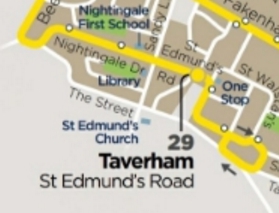 ... is reduced from every 30 minutes to hourly.

This piece of clever scheduling does, however, mean the First's X29 will be run at the lowest possible cost.

But now for the bad news!

For reasons which do not seem sensible, First have, so far, published their timetable with namebanks for Monday to Saturday, which leads to some awful presentation at peak hours from Norwich. 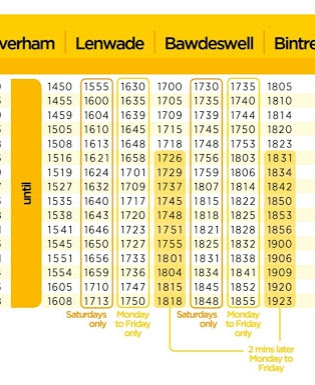 Before cringing at the design, also note hat there is no departure from Norwich on Mondays to Fridays between 1450 and 1630 when schools requirements elsewhere are, apparently, more important that offering your new Fakenham customers a good service.

But a total of six journey with notes is poor. Easily rectified by having a separate Monday to Friday and Saturday panel.

And, come on First, if you must put your notes trendily at the bottom of the columns, and if you must use words rather than codes, DO NOT PRINT THEM IN YELLOW.

Does anyone really care that two journeys are coded 2 mins later on Mondays to Fridays? Is there not a slight possibility that traffic conditions may make them even later?

The other piece of good news is that Norwich has persevered with colour coded routes ... 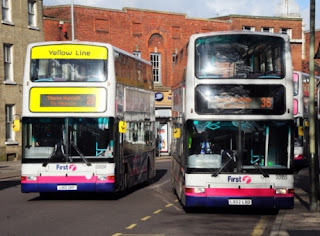 ... with front end appendages being replaced by the "standard"(?) yellow slash. 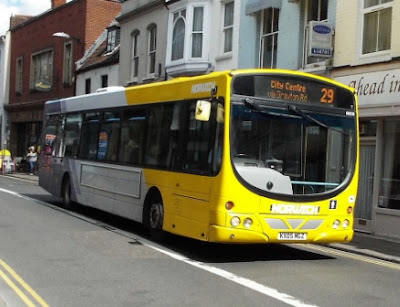 But white " NORWICH " on yellow?

It will be interesting to see the full publicity for the X29, and to watch for the woeful protestations from "Disgusted of Taverham" at his/her service chop.

For the record, First runs a non-coloured service 30 to Taverham, picking up some bits that were once served by more frequent routes. It wiggles round Hellesdon ... 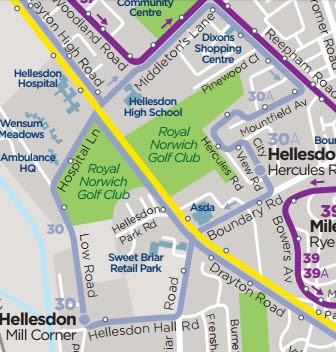 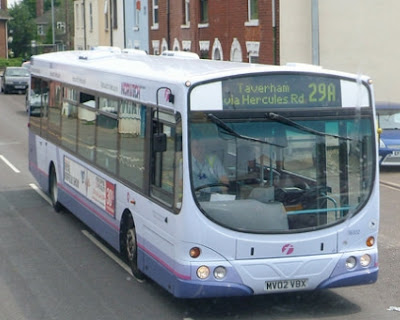 It also offers alternative wiggles between Thorpe Marriott and Taverham, again lost when the pre-2012 29 was removed. 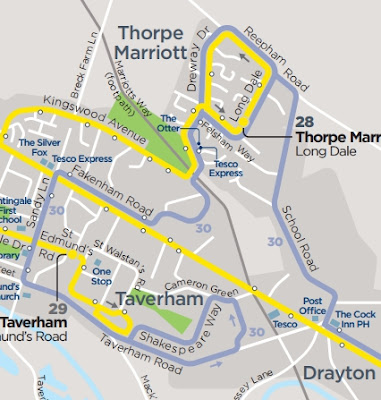 It is unlikely, however, that the 30 will offer much succour to Taverhamians who will see their service in the estate halved! 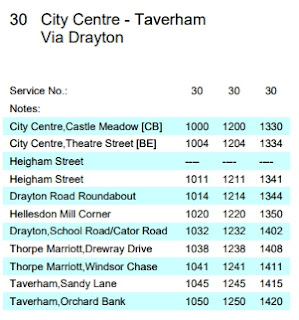