From yesterday's rather painful investigation, we now know that Basel tram ligne 3 was extended from its former terminus at the so-called border stop named Burgfelden Grenze ... 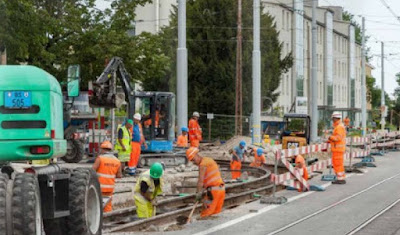 ... to a terminus a Burfegerhof which was actually AT the border. The former terminus was renamed Waldighoferstrasse after a side road near the old turning loop. 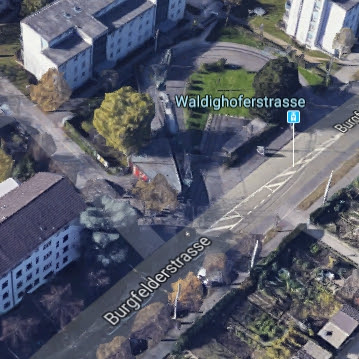 The new turning loop is shown below ... 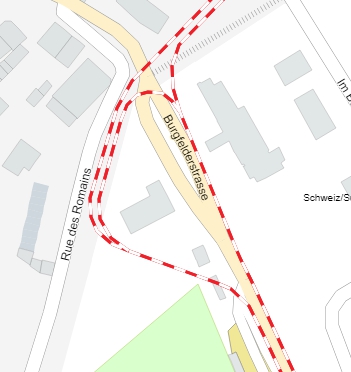 ... and we have already seen a picture of the rebuilt customs post complete with trams. 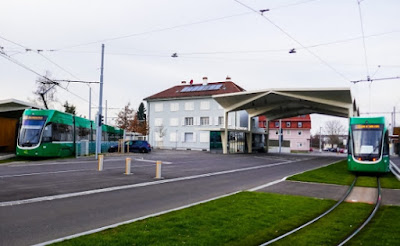 As an aside, and in order to fit all this in to a cramped "footprint", the BP filling station just short of the border ... 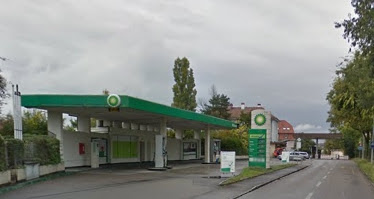 ... was closed (permanently?) to make way for the tracks. 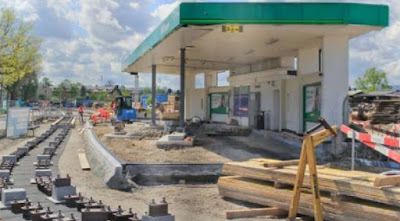 But the "prolongement" one stop to Bergferlderhof was the first stage in a major extension across the border into France. And it is in France the No 3 son's two further  puzzle photographs were taken. 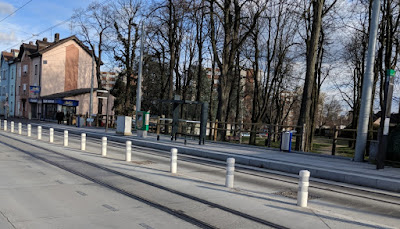 Obviously a tram stop on the new extension, but where? The shop (far left) might be a clue ... 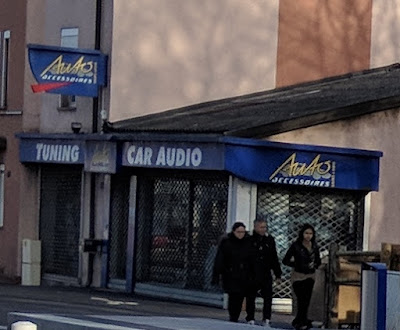 ... but, alas, "Tuning Car Audio" (difficult to translate into English!) had no obvious on-line presence. The other problem was that Google Streetview showed a mixture of "work in progress" and "nothing started yet" for line 3. 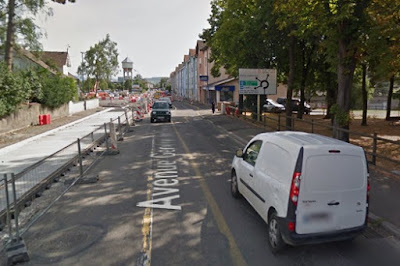 The angles were different, the outbound (FROM Basel) track construction had not started and fbb simply missed the shop! But it was there, so very much a photo-spotting failure for fbb. 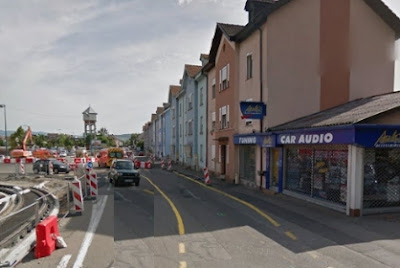 This is what this sharp turn left looks like now that the line is finished and open ... 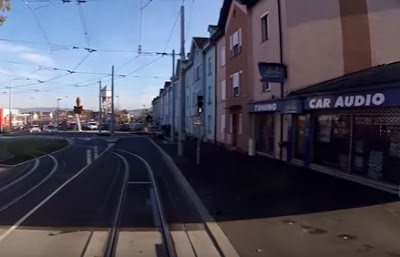 ... snapped just a little bit further on from No 3 son's original picture. It is of note that the section from Place Mermoz to Soleil along Avenue du G&eacute;n&eacute;ral De Gaulle (puzzle picture site) is unusual for a modern tram systems. 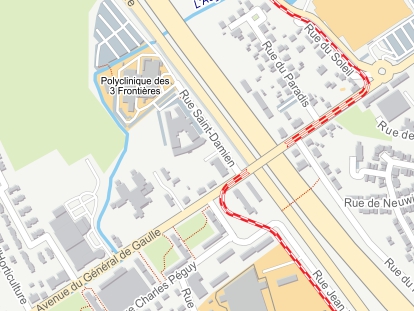 There was no room to provide reserved track, so on this section trams share the road with other traffic. 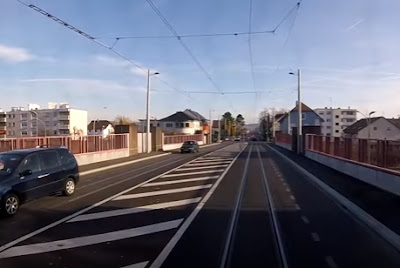 Also worthy of note is that this short stretch is one of the few places where you will pass through a normal residential area. Most of the line serves light industry and development sites rather than conventional housing estates.

It is a line which will stimulate industry and leisure facilities; which is why the third puzzle picture was just plain impossible to locate! 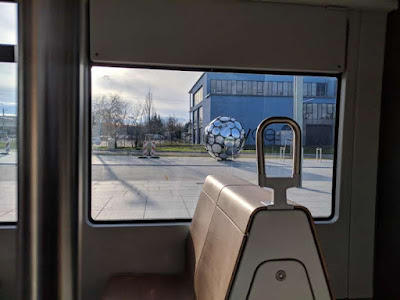 No 3 son had cunningly ensured that the name on the "blue block" was obscured. Searches on-line produced nothing like the arty glitterball sculpture thing and, as before, Streetview was sadly lacking.

Clearly the photographer is in a tram, and it must be a modern one because of the uncomfortable plastic seats.  It is obviously at some open square location but fbb could not find it. Of course with a massive clue from No 3 son, it became obvious.

But here, on StreetView and from a different angle is where the tram was at! 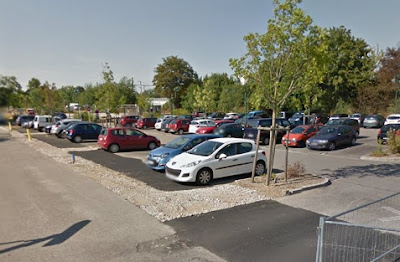 It was part of the station car park at Saint Louis, the end of the extended line. Another mini-click on the Google arrow, and we move instantly to a "work in progress" view ... 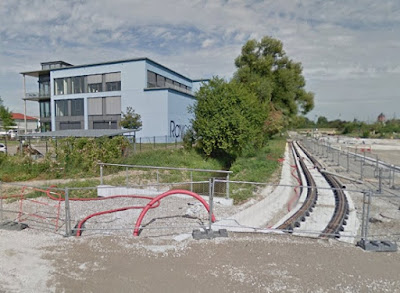 ... as Google engages warp drive and leaps into a new space-time continuum. The glitterball is where the trees were! Here is a plan of the station's terminal loop ... 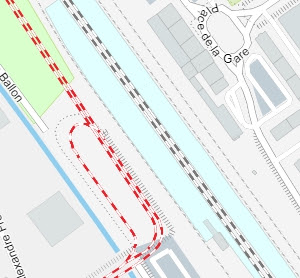 ... with the "blue block" represented by the grey square lower left. If, like fbb, you find this all a bit baffling, here is a CGI "impression" of the terminus arrangements. 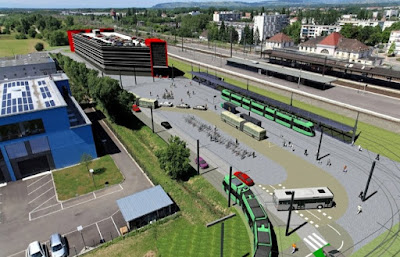 ... is on the opposite side of the line. Note also that there are two "straight-on" tracks at the tram stop. 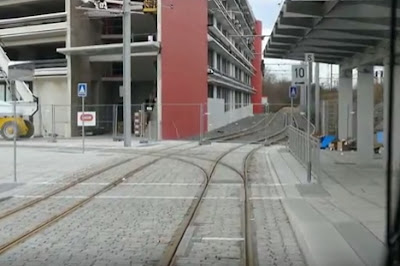 Of course there are plans for a further extension currently "under discussion". This will take line 3 onwards through another huge development area and into Mulhouse-Basel airport. 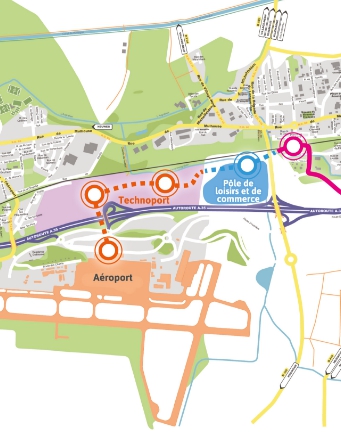 The green wodge between railway (station bottom right) and the airport (left) ... 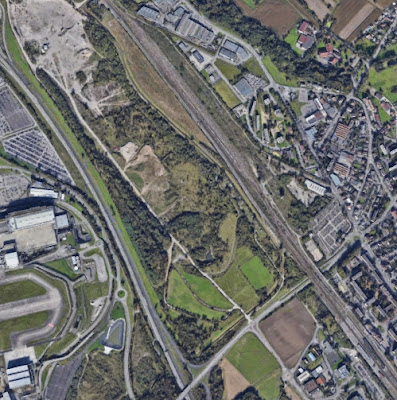 ... will be come the "P&ocirc;le de Loisirs et de Commerce" (leisure and business centre) and the "Technoport".

Tomorrow fbb will take his avid readers on a ride on full length of the extension into France, but, in the meantime, here is a plan which might help stabilise the mental faculties after the above blog! (click on the map for an enlarged version) 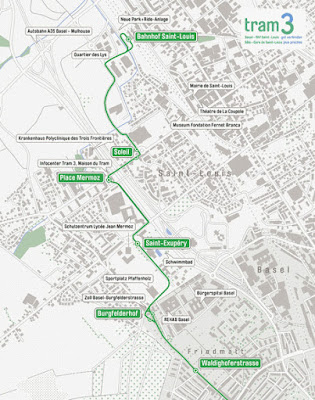 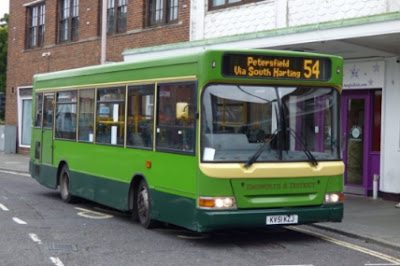 Emsworth and District, an "independent" operating on the borders of Hampshire and West Sussex, has submitted cancellations for most/all (??) of its stage carriage bus services. fbb will report further in due course. 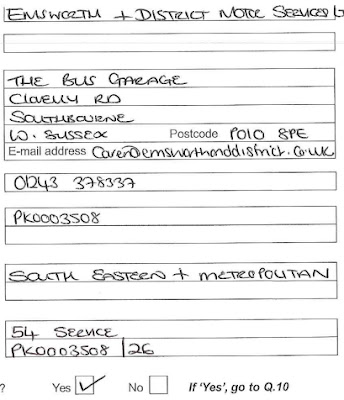 The "yes" tickbox is in response to the question, "Are you applying to cancel this service?" April 14th is the doomladen day of demise, with the school services finishing at the start of the Easter holidays.