The Tortuous Tale Of A Tempting Tin Tabernacle (1) 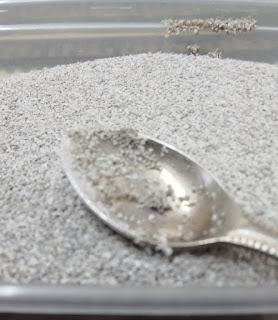 It starts, as you would expect, with ballast. In its outdoor configuration, the Peterville Quarry Railway (that well known heritage line somewhere in England) had very badly ballasted track. 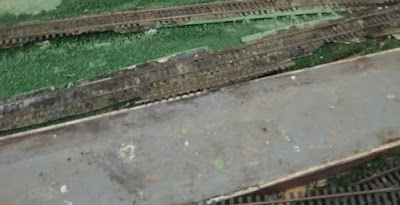 New ballast was needed and fbb was too mean to buy new track. Lacking a working model of the Network Rail ballast cleaning train ... 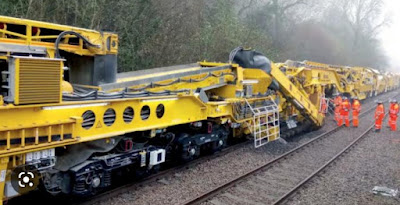 ... fbb had to resort to more basic methods. Here he pings the old ballast out of the sleeper base with that universal railway modelling tool, an electrical screwdriver! 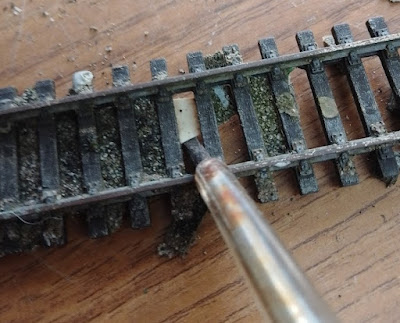 Then, glue on a new card base (outside it was plastic) which doesn't glue terribly well to the nylon-type sleepers! Hence the weights! 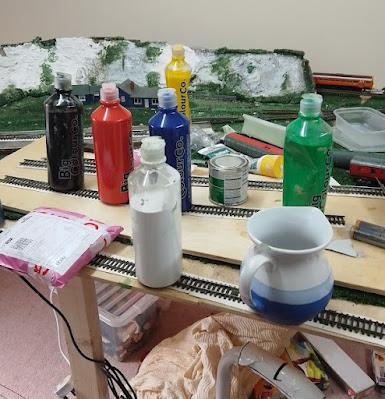 You can buy an applicator for OO ballast ... 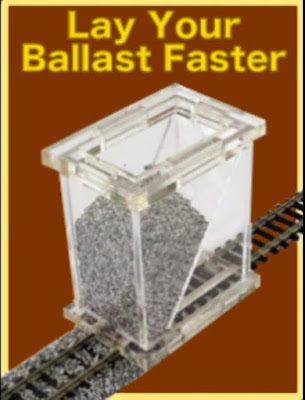 ... but fbb is happier with the cheaper utensil provided by one third of the fbb family stache of silver - viz one teaspoon! 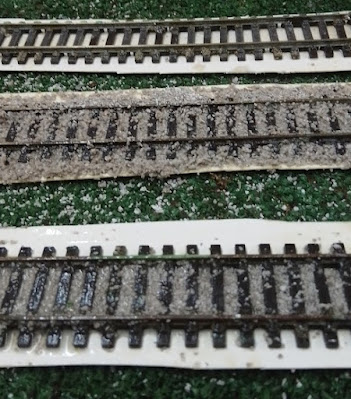 Top track is base only; bottom track is ballast splodge in between the rails and in the middle the sides have been treated. With a bit of painting the ... 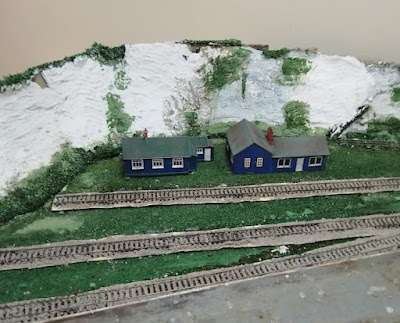 ... effect will be better than previously.
In addition to ballasting, progress with  Peterville's minimalist Tin Town is now in evident. The picture above shows two resin pre-cast (and expensive!) model buildings which act as bunkhouses for the hard working band of Peterville volunteers and formerly served as quarrymens' accommodation.
Birchinlee was known as "Tin Town". 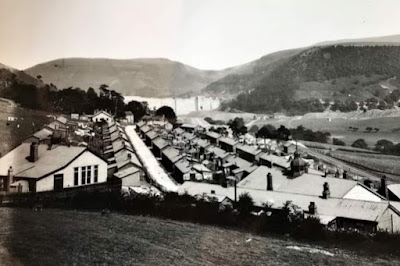 The village was built for workers constructing Howden and Derwent reservoirs, not far from Sheffield. 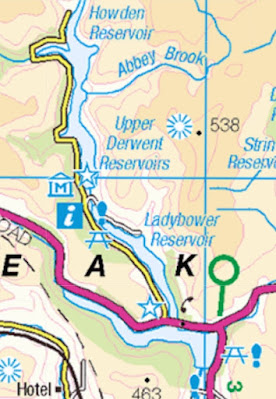 A railway line ran up the valley from Bamford station on the Sheffield to Manchester (Hope Valley) line. 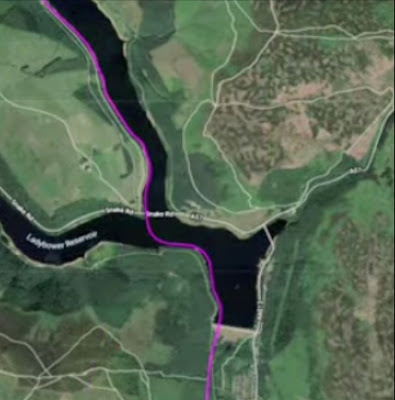 Trains were mainly there for conveying building materials .... 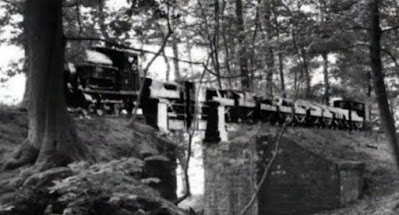 Birchinlee was, indeed, a small town with shops, pub and a non-tin chapel. 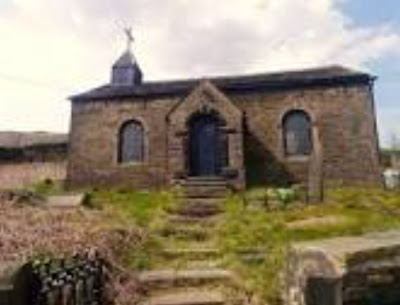 The above may have been a pre-existing chapel negating the need to tin! But more or less everything was made of corougated iron!
The only remnant of Birchinlee is one tin house recycled as a small shop in the village of Hope. 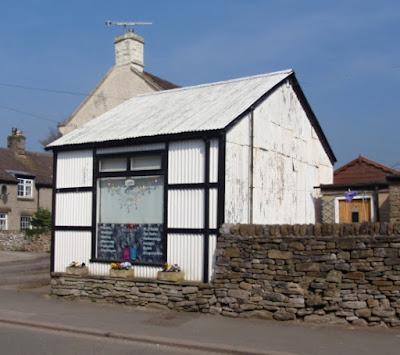 So, should fbb acquire a tin chapel to enhance his heritage tin town models with a place of worship once provided for the additional non-conformist needs of quarry workers?
Miniature C of E adherents could, of course, worship at St Hardulph's on top of Peterville tunnel. 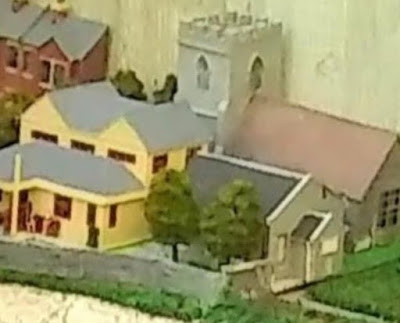 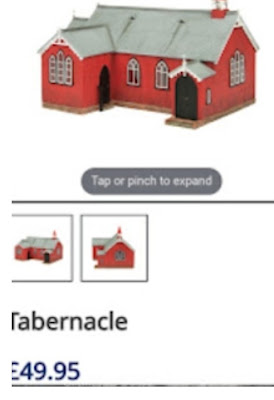 ... but not at £50! Too much for fbb's meagre fixed income cost of living crisis budget!
But yesterday was Black Friday!
The tale continues tomorrow.
Shelton Lock - a P.S.
Correspondent Julian reminds fbb that the timetable change due in December is a minor change to evening services.
Cynically, Julian writes:-
And just for fun the Evening buses to Swadlincote that were cancelled early October because they carried no one and being put back on two months later, and presumably will still carry no one. No doubt a councillor who has never used it complained.
Hmmm?
Coming Soon 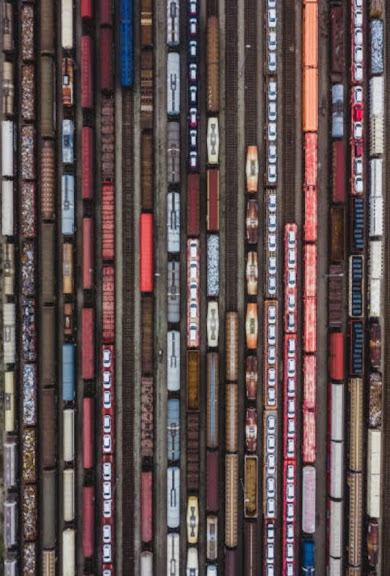 Munich!
For The Record
High Speed services have started in Spain. 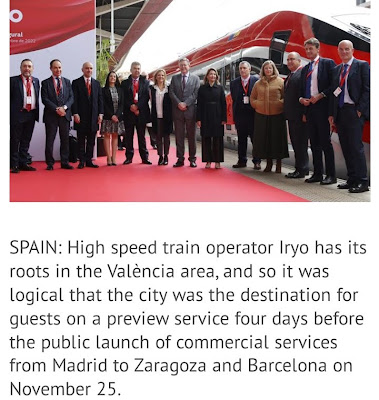 And ot all looks super posh! 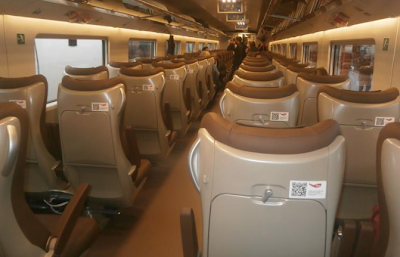 And the operator is planning more services to follow! 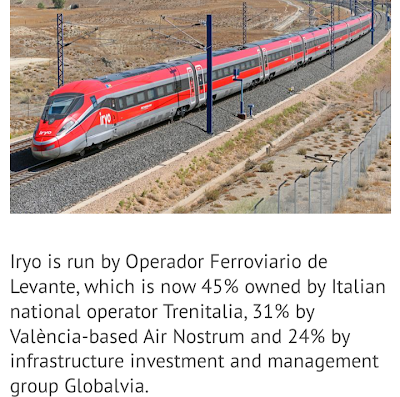 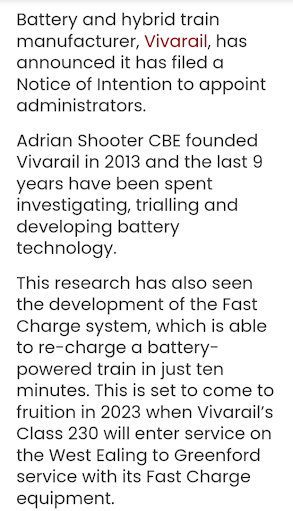 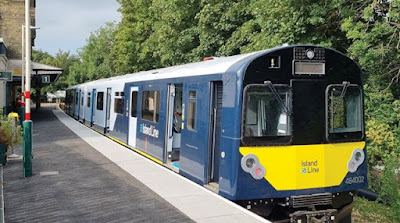 Or will new investors materialise?
Worrying times for the company's staff.
Next Variety blog : Sunday 27th Novwmber
Posted by fatbusbloke at 02:00