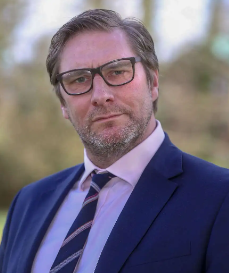 This is Conservative Mayor James Palmer and he is anxious to see a revolutionary transport plan for Cambridge. It is called CAM: Clever Eh? CAM stands for Cambridge Autonomous Metro. Potentially that means a Metro without drivers.
You can see that going down a bundle with the blue rinse brigade and their professorial hubbies as the latter tuck in to their tea and muffins over a leisurely tutorial with their intellectual academic students.
Be that as it may, Jim wants to fix it for Cambridge.
Cambridge had a tram system, Cambridge Street Tramways, between 1880 and 1914 ... 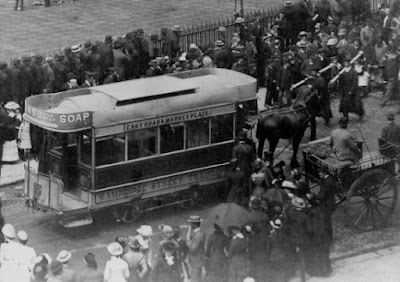 ... after which it was replaced by buses.
The mayor of the newly created Cambridgeshire and Peterborough Combined Authority, James Palmer, made the introduction of a light rail scheme, partly running underground, a priority on his election in 2017.
The strategic business case for the project was approved in March 2019. It claimed that the project, priced at £4 billion, could lead to the creation of 100,000 jobs and 60,000 new homes. One CAM Ltd was established in September 2020. The company is entirely owned by the Combined Authority and is responsible for developing and delivering the project. Its board is chaired by Robert Mair.
In October 2020, it was announced that three shortlisted companies would each be given £200,000 to develop "creative and feasible" concepts for the system. These were revealed in March 2021, created by Mott MacDonald, Egis Group, and Dromos Technologies. Each concept is said to cost £2 billion to implement. 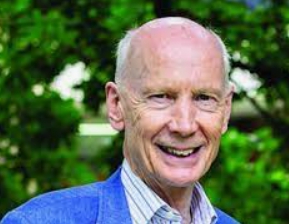 Robert Mair could, possibly, be said to hold this appointment to give some gravitas to the scheme.
Robert James Mair, Baron Mair, CBE, FRS, FICE, FREng (born 20 April 1950) is a geotechnical engineer and Emeritus Sir Kirby Laing Professor of Civil Engineering and Director of Research at the University of Cambridge. He is Head of the Cambridge Centre for Smart Infrastructure and Construction (CSIC). He was appointed an independent crossbencher in the House of Lords in 2015 and is currently a member of its Select Committee on Science and Technology.
Gravitas indeed!
So what's the plan?
A trawl through the internet reveals a huge variety of plans and proposals, but the overall scheme seems to look like this. 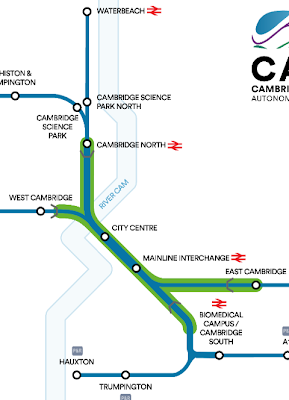 There would be a tunnel through the centre of the city (outlined in green above) which would carry Metro "vehicles" speedily past all that nasty traffic. The service would be very "limited stop" through the central area with only one Metro Station shown serving the "city" itself.
To the west, two branches would run. 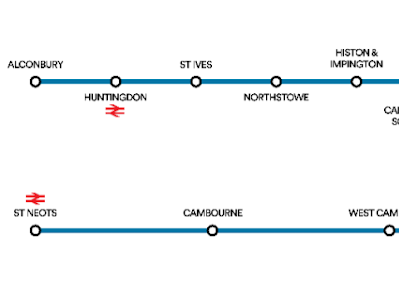 Something based on the current busway would be extended all the way to Huntingdon and further to Alconbury. 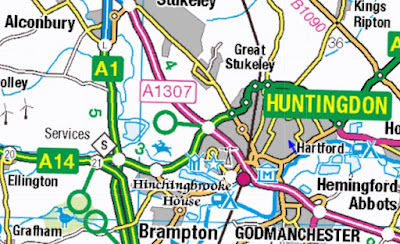 A second westbound route would serve the new town of Cambourne and continue to St Neots.

On the east, two branches would run to Mildenhall and Haverhill. 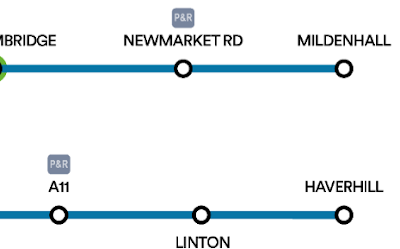 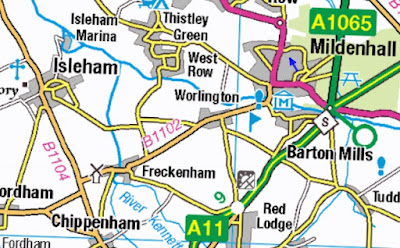 If your geog is a bit thin in this area, be assured that these are long distance routes, not just outer suburban extensions of city services. This is a VERY BIG plan!
Speculation about the detail is rife, but the progenitors are guarded about what form the "trains" will take and where the stops might be. 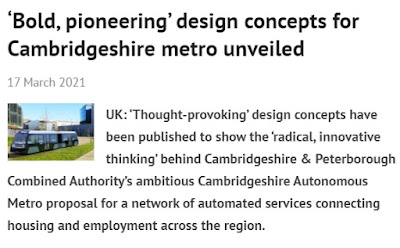 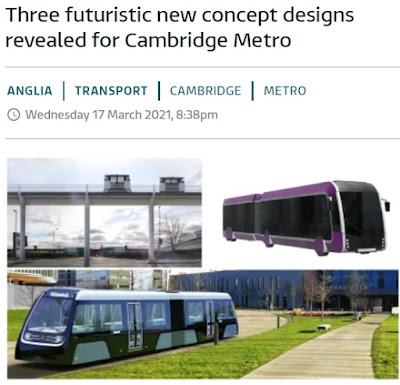 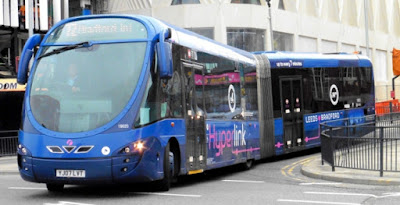 ...a bus! Now where have we seen that idea before? 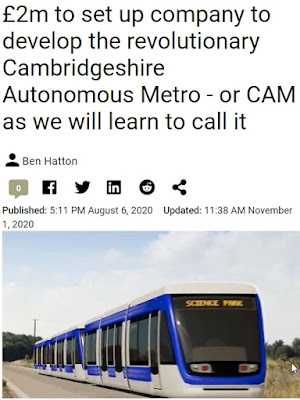 Some money has already been spend - but not much compared with the 4 billion projected cost!
But there are some doubters. 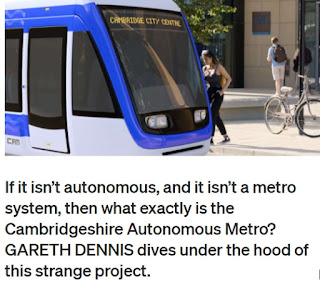 Journo Gareth is not at all sure.  Certainly there are many uncertainties! 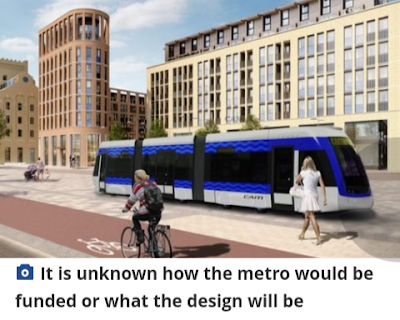 Not least the usual minor challenge of who foots the hyper-massive bill.
But, we need not have worried. James Palmer, Conservative Metro Mayor of Cambridgeshire has lost his seat at last Thursday's election and announced his retirement from politics.
His successor is Nik Johnson ... 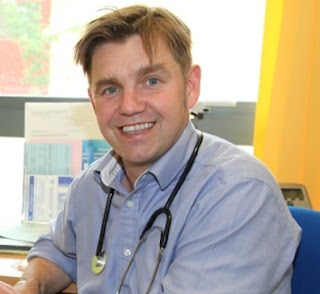 ... who works at Addenbrookes Hospital.
Nik Johnson sails under the red peoples flag which is deepest red ... 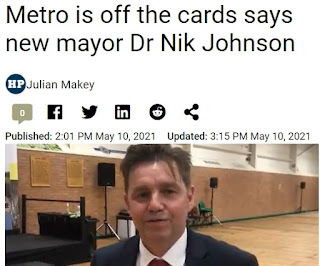 ... and one of his first acts was to CANCEL the Cambridge Metro project.
Yet again a consistent transport policy crumbles under political expediency and dogma.
Although it is ironic to see the Reds cancelling an over-priced unrealistic transport project aimed to do good for the whole community as it was equally ironic to see a huge and dubious capital project promoted by the Blues.
Politics is a strange game, is it not?
Next Variety blog : Saturday 14th May
Posted by fatbusbloke at 02:00