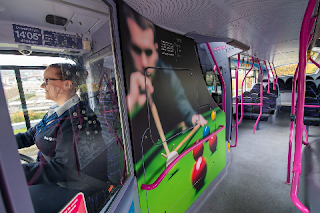 The interior of the new-livery Sheffield Bus, named, or so fbb thought, Giles Fearnley on the inside only ...

... supports the view that the coloured bubbles dribbling down the vehicle's side ... ... might well be snooker balls. All Sheffielders will recognise the allusion straight away. (or not!)
"Ay oop, lad, what's them bubbles on 't 'bus?"
"Snooker, innit, luv? Sithee - s'not bubbles but a lowerd o' balls!"
Who Is The Owner? 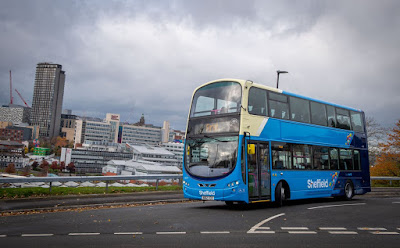 fbb has previously reported that the new-livery Sheffield Bus (with Giles Fearnley named inside) had no name on the outside. It does. If you look at the darker blue stripe under the "Sheffield" you can read it there - if you have good eyesight! 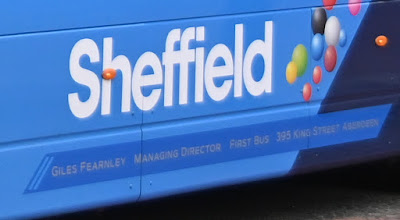 It reads, "Giles Fearnley  Managing Director  First Bus  385 Guild Street  Aberdeen".
A chum asks, "Is this the bus's LEGAL LETTERING", information which must be displayed by law?" Chum also says that he understands that this legal lettering MUST be the name of the company that holds the Operators' License (colloquially "O disc") which allows it to operate as a legal Passenger Carrying Vehicle on service, carrying fare paying passengers. 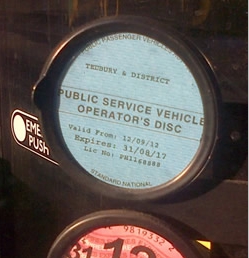 If the owner of the bus is NOT the holder of the "O disc", then the bus should carry a label "ON HIRE TO" and the name of the O disc company. That doesn't seem to happen any more - but should it?
Does First Bus of\Aberdeen have licences for bus services in Sheffield?
The regulations for LEGAL LETTERING are as follows:-
No vehicle in respect of which, by virtue of section 17(1) of the Transport Act 1980, a certificate of initial fitness, or a certificate under section 130 of the Road Traffic Act 1960, or a certificate under section 47 of the Road Traffic Act 1972 is required shall be used on a road unless the vehicle is marked with clearly legible characters:-
(i) not less than 25 millimetres tall,
(ii) in a conspicuous position on the nearside of the vehicle,
(iii) in colours which contrast with their background, and
(iv) indicating the name of the owner (as defined in section 44(1) of the said Act of 1980 in relation to a vehicle to which that definition applies) of the vehicle and the owner's principal place of business.
As an example of how this might be applied to a heritage vehicle, we can look to First Bus in Leicester. 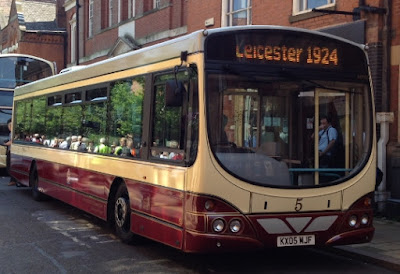 It carries a historic legal lettering as applied to Leicester Tramways ... 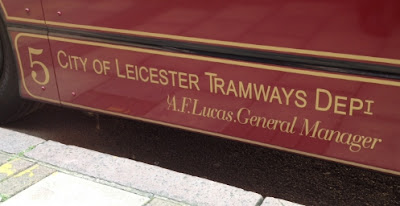 ... and, towards the rear of the vehicle, the correct legal lettering. 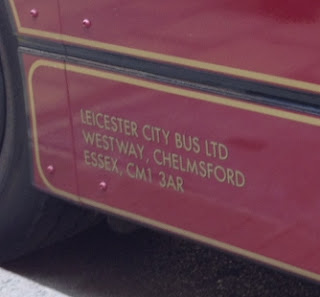 Daft, of course, that Leicester City Bus is based in Chelmsford; daft - but legal.
The same system was used on the Heritage Livery bus ... 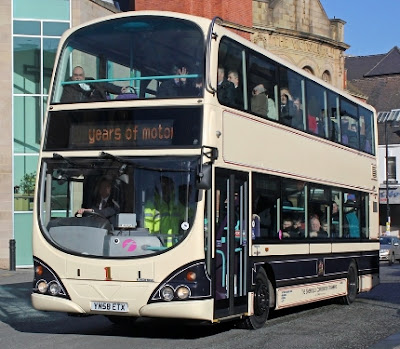 ... which remembered Giles' grandfather a much respected General Manager of Sheffield Corporation Tramways. 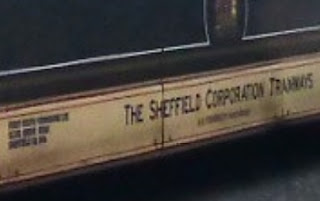 Would it be safer for the Giles Fearnley Bus to have proper legal lettering for:-
FIRST SOUTH YORKSHIRE
OLIVE GROVE
SHEFFIELD
S2 3GA
You would hate to see Giles' retirement marred by a fine for mis-use of an O Licence!
Problems With The Sunday X57 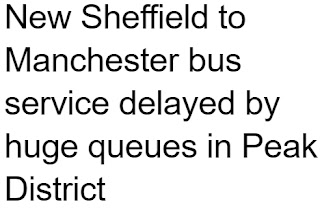 The Sheffield "Star" reports:-
The Snake X57 bus service, which runs between Sheffield and Manchester, experienced 20 minute delays at the weekend (October 25) due to half-mile queues for Fairholmes visitor centre car park on the A57, in spite of signs telling motorists it was already full.
Cars that had been unable to get into the car park were also queued up along the side of the road, parked on double yellow lines, making it difficult for buses to pass. 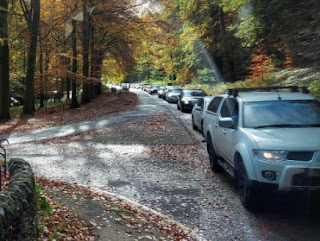 Alf Crofts, managing director of Hulleys said: “There were some issues on Sunday with poorly managed parking on the road to the Fairholmes visitor centre and we are liaising with Severn Trent about resolving this."
This was the first day of operation of the Snake X57 service, which runs along the A57 and attracted widespread praise from passengers in spite of the delays.
Responding to the traffic issues, a spokesman for the National Park Authority said: “When public car parks at Fairholmes in the Upper Derwent Valley are at full capacity, this is clearly stated with signage at the entrance to the site on the A57.
"We ask that visitors travelling by car do not attempt to access the site or wait in their vehicle on the road itself, when car parks are shown as full.
"Double yellow lines are in place on both the A57 ... 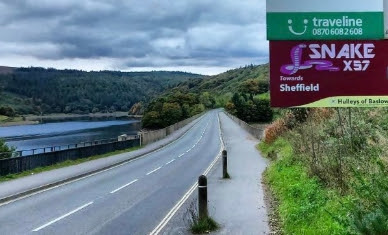 Fixed penalty notices are not issued by the National Park Authority, but patrols may be in place from the relevant enforcement bodies. The National Park strongly supports sustainable transport solutions such as the X57 Snake, and ask that car users respect highways access throughout the Peak District, to allow public transport to operate safely and efficiently, benefiting both visitors and local communities.”
A spokesperson for Derbyshire County Council, which is responsible for the road, added: “We are liaising with partners to get the road swept as often as is possible so people can see the parking restrictions clearly. We also carry out parking enforcement in the area, which we have increased in several rural areas this year due to more people getting out and about in the countryside.”
Of course, Derbyshire might like to consider supporting extra bus services to discourage motorists.
Oh, yes; they stopped all that unnecessary expenditure a few years ago.
Vandalism Can Be Fun! 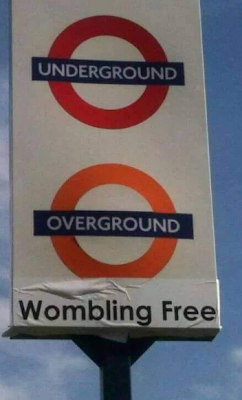 It does remind fbb of a "single" performed by Mike Batt. 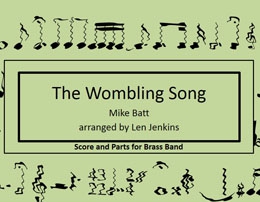 This revealed the location of the secret bunker (under the Windmill) ... 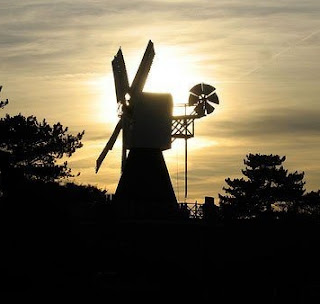 ... on Wimbledon Common where Transport for London's PPE** is situated.
Tomorrow, fbb will be looking at a revised London bus service which changed yesterday. For now, the words of Mike Batt's song will provide a taster. ** PPE - Publicity Production Executive a k a The Wombles.
Sent To Coventry? 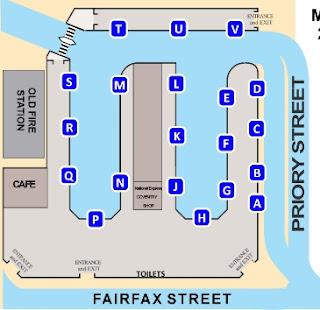 Coventry Bus Station known as Pool Valley is a huge affair in the shape of a letter W. Stands are well spaced out and there is plenty of room for both buses ... 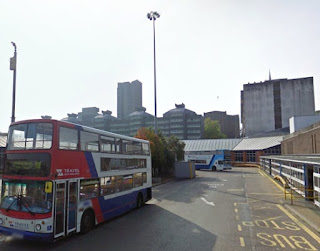 ... and people who enter through two classical porticos on Fairfax\Street. 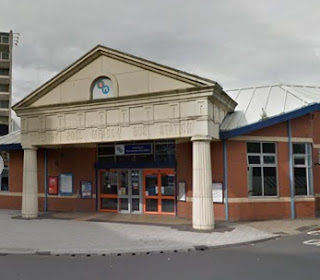 National Express leave from bays A B C and D adjacent to Priory Street and on the opposite side of the W we have the splendid old fire station building ... 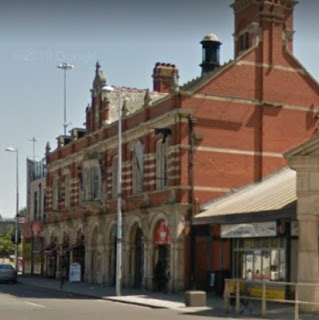 The whole place is so much better than it used to be in "the good old days" when lines of "basic" shelters were all that you got by way of protection. 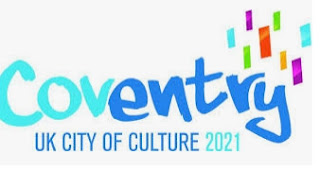 UK City of Culture is a competition run by the Department for Digital, Culture, Media and Sport. Every four years, cities compete to be awarded the prestigious title. The first UK City of Culture was Derry/Londonderry in 2013 followed by Hull in 2017. The title brings with it a huge amount of opportunity to place your city on a national and international stage.
Coventry was awarded the title in December 2017 after competing against eleven other cities. The bid was won on the strength of our city's diversity, its youthfulness and the opportunities that being so centrally located bring. Coventry's year in the spotlight will run from May 2021 - May 2022.
So Coventry bus station is to get a refurbish, an upgrade as below:- 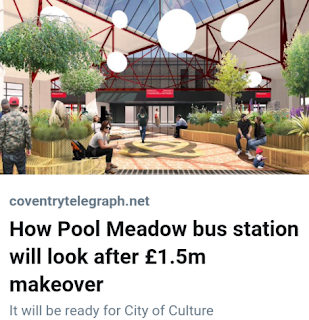 There is a lot to do before May 2021! But the idea of a bus station as an illustration of a City's "culture" is, to say the least, "interesting"!!
Tomorrow, we examine the work of "The Wombles"
Next London bus blog : Monday 2nd November
Posted by fatbusbloke at 02:00