Publicity Matters - Yes It Does Matter! (1) 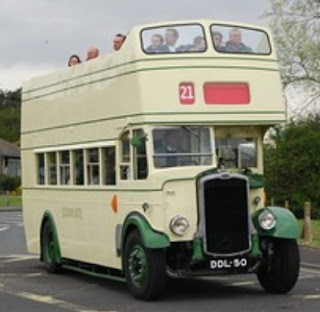 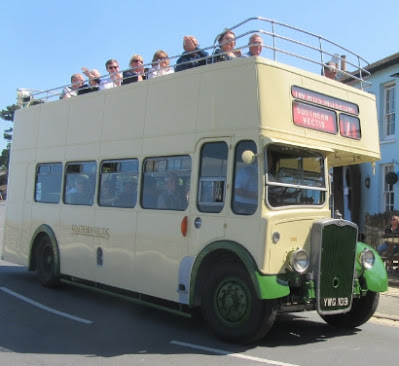 ... and it IS owned by the Museum AND (hairies, please note) it has been given back its original registration number FLJ 538.
Hey ho; another afternoon on the naughty step!
Trouble At 'T' Mill? - Nay Lad Wi't' Tram?

Running any form of public transport must be a bit hairy at the moment and fbb's sympathy goes out to
the good folk at\Supertram. They have just come through a period of disruption brought about by the need to replace the rails on much of the system. Combine this with the ongoing problems of the v*r*s and life much be very stressful.
Having wound their frequencies back up to normal as the first lockdown came to an end, the management then had to announce a system-wide service reduction on October 20th.
Daytime frequency was reduced from every 12 (it used to be every 10 not long ago) to every 15 and down to every 20 in the evenings. 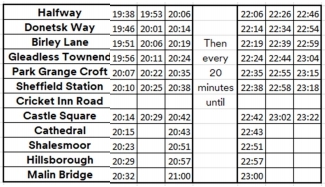 A few journeys were chopped off at the end of the day with last trams going to beddy-byes about an hour earlier than previously.
But early in November it was announced that from last weekend the evening service would revert to normal, but with the daytime remaining at every 15.

fbb duly arranged for the re-extended evening frequencies to be uploaded to GoTimetable, which happened on Saturday 7th.
Congratulating himself  and his tech team of getting the update updated on time, fbb was appropriately relaxed. Until an email arrived from his Supertram mole on Saturday 7th.
"The arrangements for evening service from today are cancelled. Instead services will finish at around 2000 until further notice!" 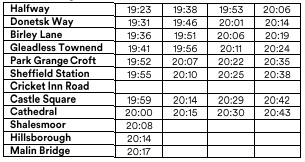 It is all on line - if you happen to have looked at the right time. Or you could try Travel South Yorkshire.
Changes to bus, tram and train services in South Yorkshire
Last updated on 09 November 2020. From Saturday 07 November there will be a temporary timetable operating hourly on the Tram Train and on the Blue, Purple and Yellow trams.
Hourly on the two main services?
If you need to use public transport, use our journey planner to plan ahead.
So fbb did! 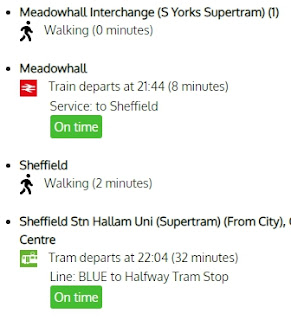 Useless, as expected.
But the good news is that the temporary timetables are available.

The problem, as fbb understands it, is that Supertram has insufficient staff to run the system with a significant number self-isolating. The overnight maintenance shift has been stood down and, according to a reliable source, "we don't have enough managers to cover the work."
Not enough managers? The mind boggles. Where are Blakey's successors when you really need them? 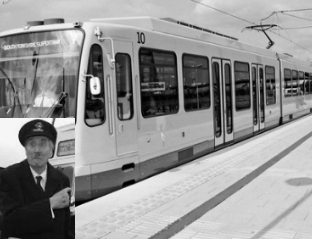 You would guess that he would be a "manager" these days!
Back To The 383 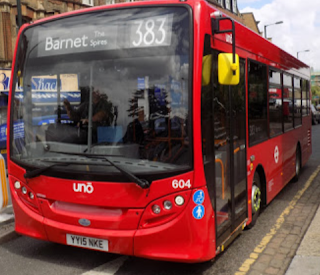 Back in September 2019, Roger French took a trip on the 383, then only running between Barnet and Woodside Park. 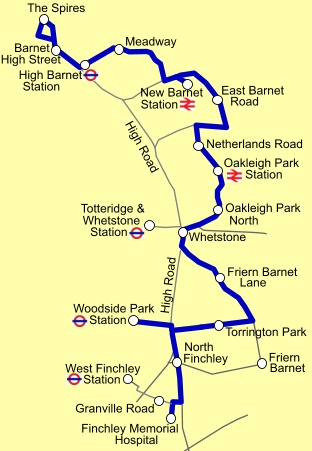 He was impressed by the buses with good clear route branding on the outside and lots of good stuff inside as well. Little snippets about the route; ... 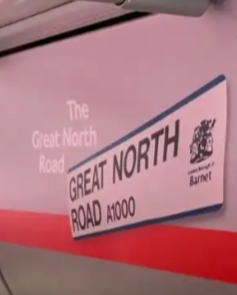 ... The A1000 was once the A1 and it ran all the way from London to Edinburgh - you couldn't get much Greater or Norther than that! 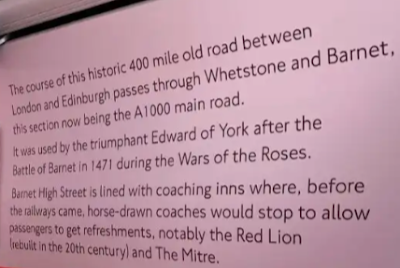 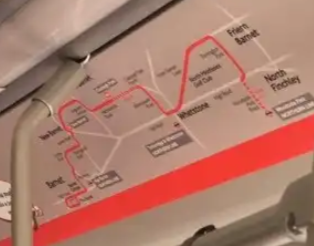 ... replicated on the vehicle's posterior.
So Rog went back to check out the extension to Finchley Memorial Hospital and found everything fully updated for the first day ... 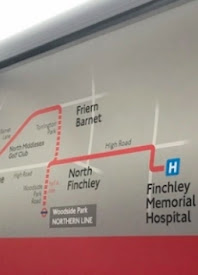 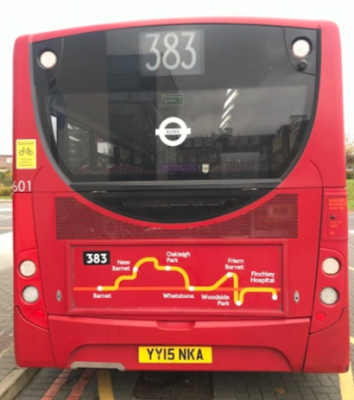 ... to which had been added some chatty feedback speech bubbles. 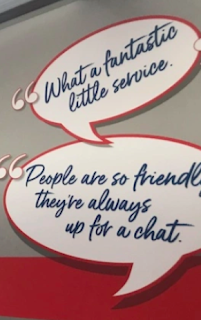 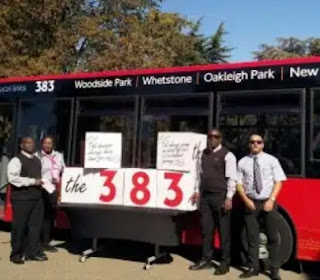 ... was not repeated for a short extension but Roger was impressed that all the new stops (not many of them, admittedly) had been planted and "plated" ... 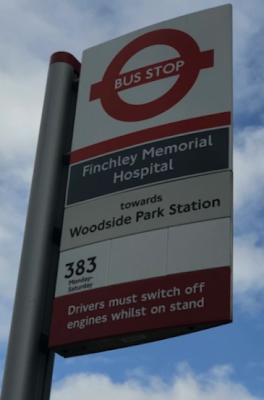 ... although the route does go a but further than Woodside Park Station - why not "towards Barnet"?
Rog also blogged that "the timetables at every stop had been updated." Not quite Mr French. There are no timetables at any stops in London. There were, however, correct departure lists plus the usual maths exam to work out how long you journey would take ... 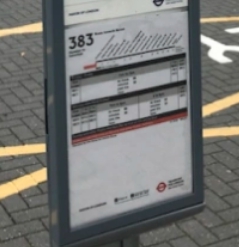 ... and ooodles of room in the frame to display a proper timetable and a proper route map.

And, really, that says it all. The GOOD THINGS about 383 publicity have all come from Uno, despite Transport for London and the BAD THINGS (the inadequate things; no map, no timetable) are all from Transport for London's potty publicity policy.
Here is a  reminder of just part of Roger's concerns ... 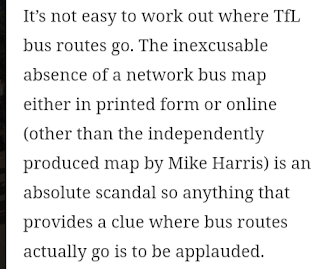 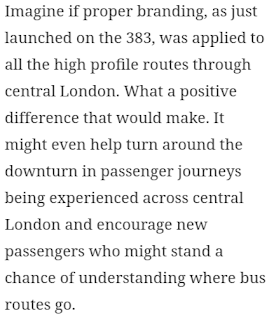 Roger says much the same in his column in the November issue of Buses magazine. 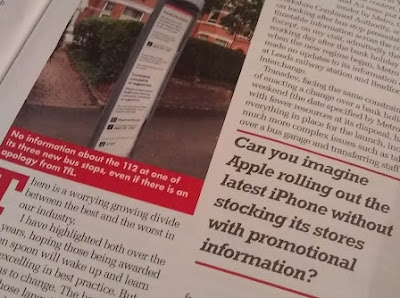 And so say all of us!
And if you are tired of poor quality telly and looking for stimulation in the lockdown, what better than a five minute YouTube video of route 383?Yep! You are probably right. Daytime television in more exciting!
More Publicity Matter blog : Wednesday 11th November
Posted by fatbusbloke at 02:00