Sitting at his office desk in rain-soaked Seaton, fbb was only able to report the information that First Essex wanted us to know.

Roger French has more time, more money and more energy than fbb (and possibly less other commitments?) so you can understand why most of his blogs are based on actual personal experience. So it was that Rog sampled the new Essex Airlink services on an exciting expedition last week.

A few extracts from Roger's recent blog (link here) exposes the truth, the whole truth and nothing but the truth - and it is not pretty. fbb looks a little deeper.

Saarfend Bus Station
Except that it is not called a bus station, it is a Travel Centre. It is quite swish and modern ... 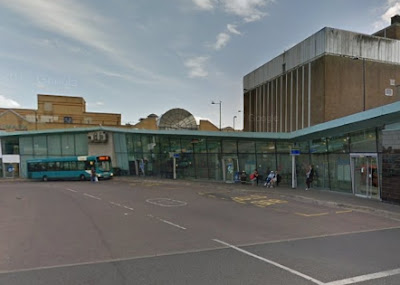 ... but, as the Local Authority Bus Station Design Manual now requires as compulsory, it is not big enough for all the routes that serve it. 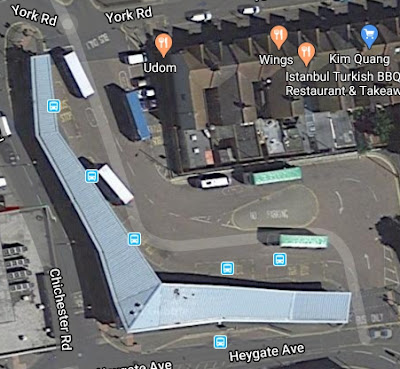 So it splurges northwards across York Road to some stands adjacent to a big car park. 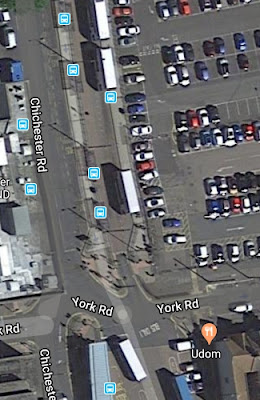 First Bus departures seem to be split between stands in the bus station (sorry Travel Centre) ... 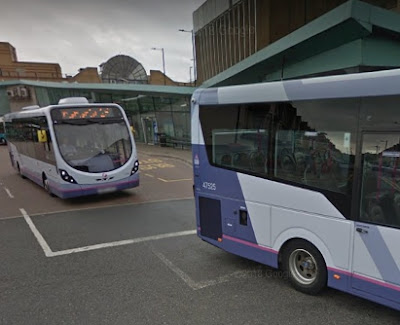 ... and stands in the not quite centre bit of the Travel Centre, namely Chichester Road. 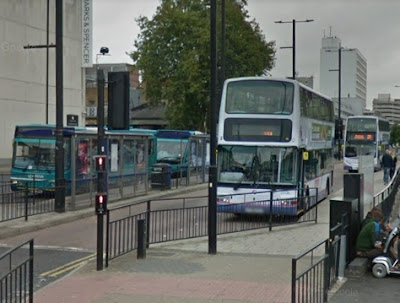 So where might the prestigious Essex Airlink X30 leave from? The good news is that there is an enquiry office in the central Travel Centre ... 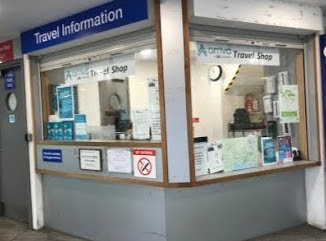 ... but the bad news is that it is run by Arriva, successors to Southend Corporation Transport.

And they are telling you nowt! 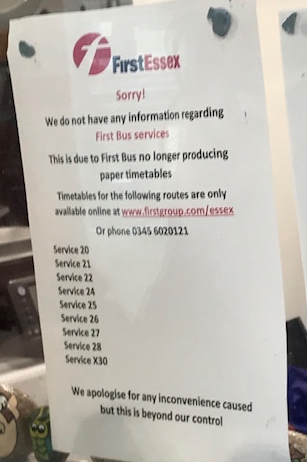 Not quite nowt. Obviously grossly inconvenienced by passengers wandering around seeking unsuccessfully a stand for the prestigious Essex Airlink X30, Arriva has posted another notice. And from which of the two bits of the "Travel Centre" does the X30 depart.

Answer, obviously, NEITHER! Roger's blog takes up the story. 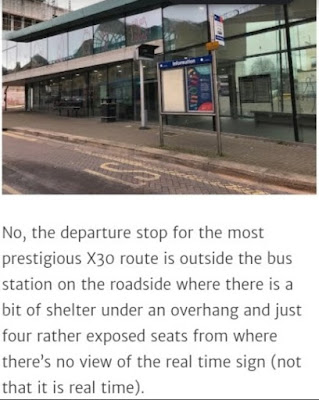 And there it is on Heygate Avenue as per Google Streetview. 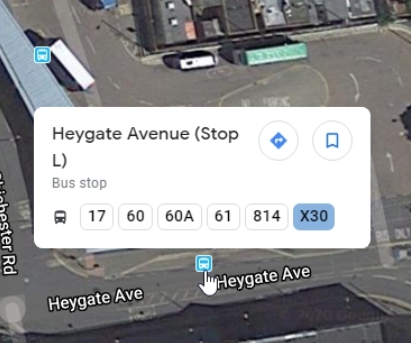 And there are the seats and the inadequate shelter ... 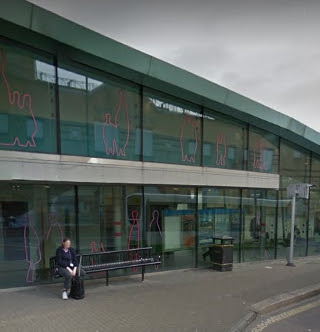 ... with a good, clear view of the back of the unreal time departure display. What about information in the substantial frame at the stop itself? 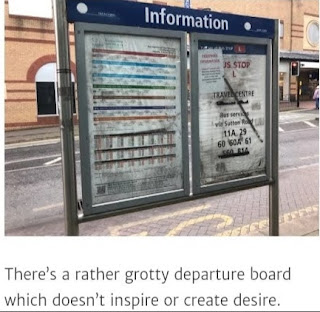 But at least Rog had the unreal time screen to encourage him on his onward journey to Stansted. 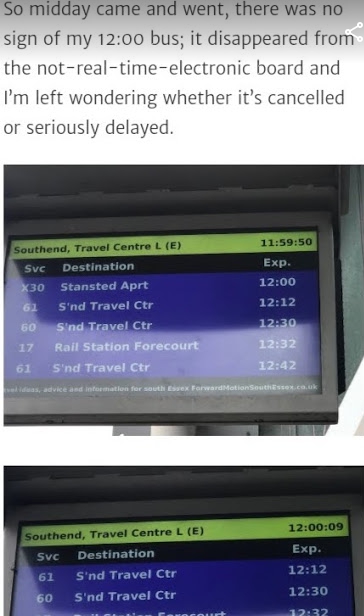 Before we move on, one or two observations from the screen.

What is an "Aprt" and why doesn't it say "Airport"?

Why, when there is room enough, do we have "S'end" and "Ctre"? And what use is a departure sign that tells you the next bus is going to the exact spot where you are standing.

But Roger is on trend, with it, techy savvy and made of resolute public transport sterner stuff. He goes "on line", "on tweet" to be precise, to ask what has happened to his prestigious 1200 X30 departure.

The reply would be farcical if it weren't so unbelievably stupid.

Traveline's timetable is incomprehensible and WRONG but it does show a stop at Southend Victoria Station Interchange Stop VJ.

And there it is, enshrouded in gloom. 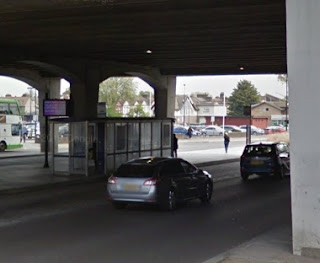 But "Victoria Circus" it ain't! It used to be a roundabout. 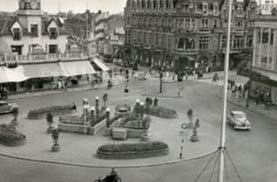 But resilient Roger realises rubbish when he reads it on his phone. Most people wouldn't and would go searching for the non-existent Victoria Circus. 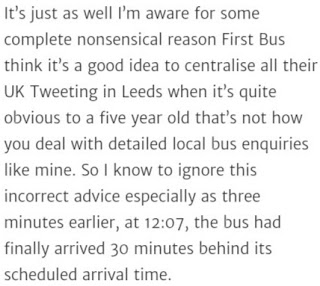 The delay had been caused by roadworks at Rayleigh but not a dicky bird was reported by the twits on First's Twitter service. That's because, according to Roger, the twits are in Leeds!

The Journey continues.
Apart from intrusive roadworks, the journey went well, just leaving problems with the on board technology ... 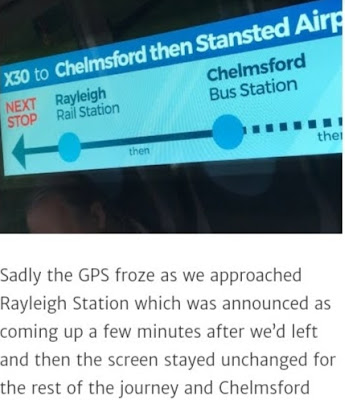 ... and some confusion as to which way the bus is actually going as per the graphic's arrow. Excels are just as weird ...

... and, when Roger travelled, were showing the wrong date! 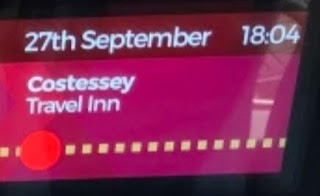 Chelmsford
Roger hopped off his X30 bus in Chelmsford to step back to an X10 because there (oh joyous joys of joyfulness) is a First Bus enquiry office. 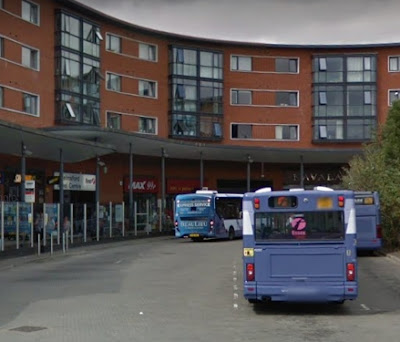 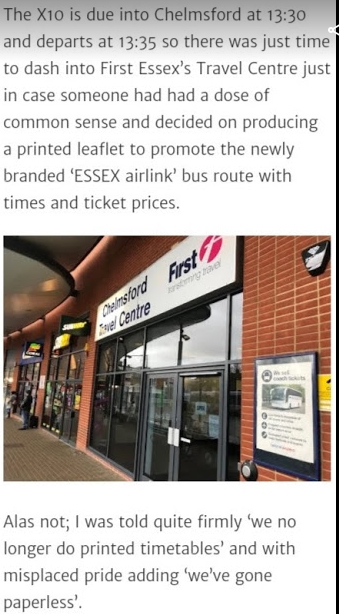 ... but, apparently, First are not giving any of them to members of the public. I mean to say, you wouldn't want to encourage passengers to use the buses would you? That would never do!

A Conclusion?
Roger's closing comment is both sad and appropriate.

Frankly that just about sums up why First Bus struggles so much. Instead of putting out helpful information such as ‘all buses on our new ESSEX airlink branded X30 are experiencing delays of up to 30 minutes due to roadworks; we apologise for the disruption this will cause to your journey’ you get this nonsense remote from reality.

And to promote a new brand without making any printed material widely available is just completely bonkers.

You can have all the nice new buses in your fleet but if these other issues are not addressed you’ll carry on losing passengers – and deserve to.

Next Roadworks blog : Tuesday 25th February
Posted by fatbusbloke at 02:00