Chipping Away At the Sod Burying?

At last (sighs of relief all round) fbb arrives at Chipping Sodbury, one of many UK towns with slightly risible names. Some, unkindly, are wont to swap the first syllables!

"Chipping" has an Old English link with "a Market", possibly even "a long market square". 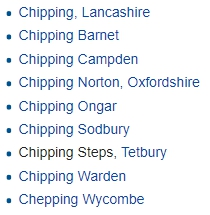 Sodbury is simply the fort (or walled settlement) overlorded by Soppa or Sodda depending on your understanding of old English pronunciation.

Not really amusing at all. 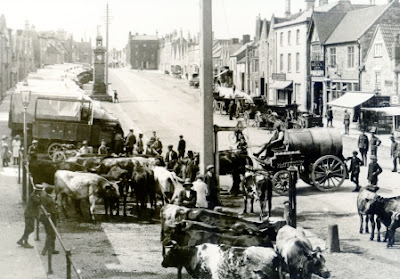 They were right about the market, which, way back, would have had more pens for animals as well as stalls. 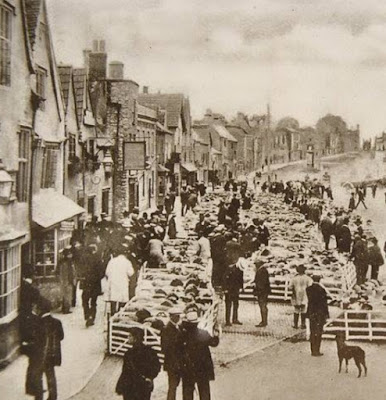 We can stab at a date for the pic above and below because of the clock. 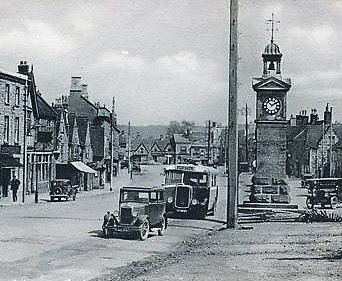 ... gaining a substantial extension in the form of a very useful arcaded shelter in 1948. 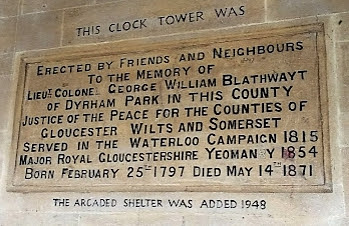 In recent times, part of the arcade has been enclosed ... 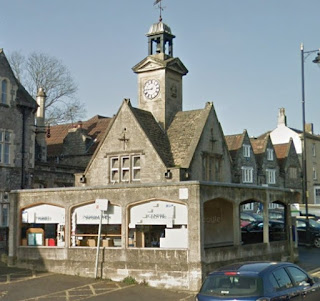 ... to create a small but perfectly formed information office. The block also includes the usual offices!

fbb's Y1 arrived on a one way loop via St Johns Way to a terminus in Wickwar Road. 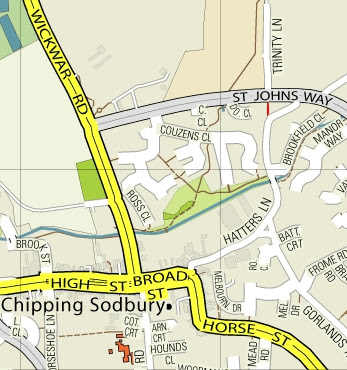 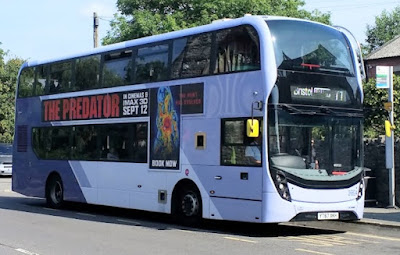 ... vehicle but a later journey (see below) was on a branded bus. 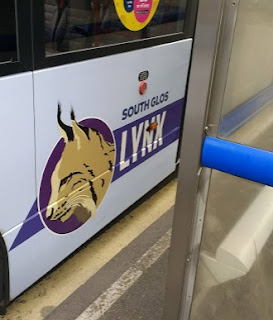 This was the same as the T1 which featured a few weeks back, but fbb guesses that "the lads" at the depot had neatly added "& Yate"! 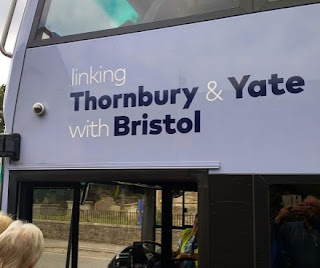 After a short break it departs via Horse Street and "the estates" of Yate. 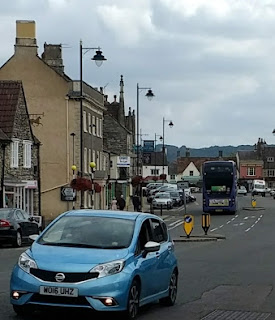 There is a "real time" display which oddly places the bus station in Bristol, but ...

... the City Centre could be anywhere. Could be Bath? The printed departure list was fine, but in this case it would be more sensible to merge the daytime Y1 with the evening and Sunday Y2. 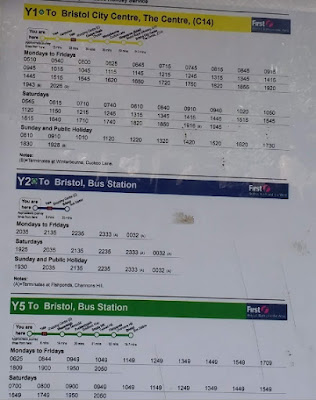 Next calling point was the "clock tower" Information Office where, deep and glorious joy, there were bus timetables including the great Yate book. 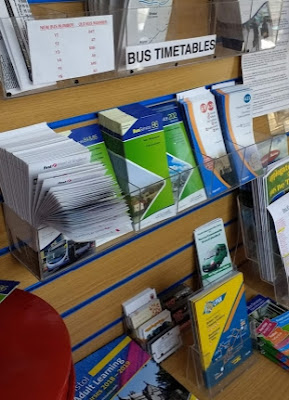 A batch of Stagecoach leaflets was there as well ... 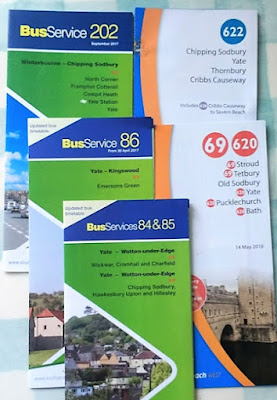 ... three of them being South Gloucestershire Council productions. Was the set complete? 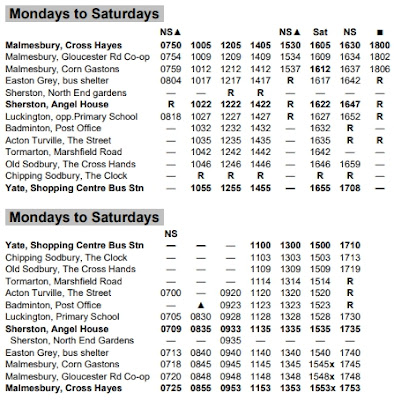 Sadly not - as fbb spotted a Coachstyle service 41 passing by. 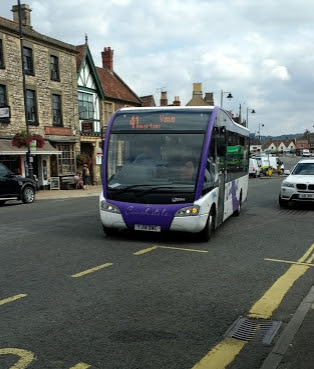 Slightly disappointing were two superseded First Bus leaflets for the X46 and 82 ... 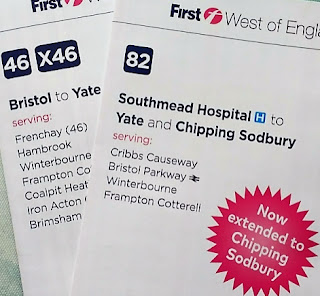 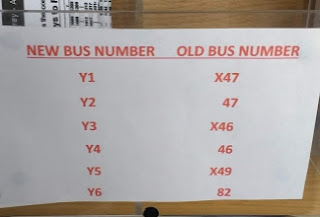 Full of a warm and comforting glow, fbb then repaired to "The Hamptons" Deli Cafe ... 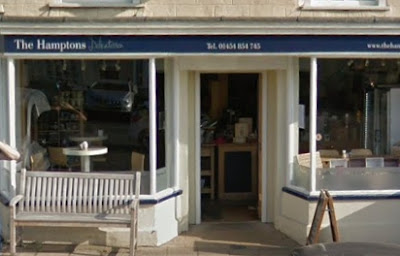 ... where the peckish old man was able to secure a table there in the right hand window. The all-day breakfast was scrummy and washed down by a generous two mugsa. 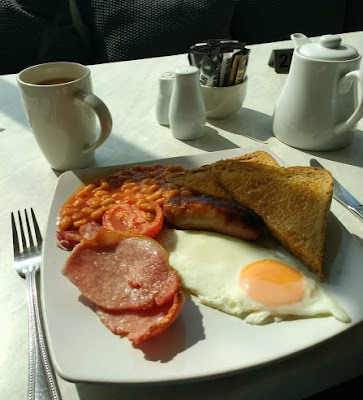 Welcome, excellent. Service, excellent. Food, excellent. Price, a bit more than fbb would normally pay at about £9, but worth it for the friendly service and the front window seat.

fbb had been pre-warned that the Y5 to Bristol interworks with the Y6 to Parkway station, Cribbs Causeway and Southmead Hospital. As fbb muched happily away, he could spot the Y5 arrival at about 1216 which was in the new South Glos Lynx proper orange and blue colour scheme.

Thus a photo was obtained as it passes the caff, now a Y6. 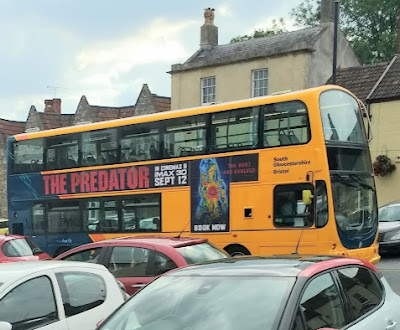 Having noshed, your replete author wandered outside to spot the 1243/1249 changeover. He waited at the stop attached to the clock shelter in eager anticipation.

But Y6 arrival was there none. 1249 came and went. Just after 1300 your bewildered blogger bumbled round to Wickwar Road, expecting his expected Y5 to have vanished from the electronic display. But hold fast, cap'n!

Option 1 : a stop at Coalpit Heath not served by the Y5. 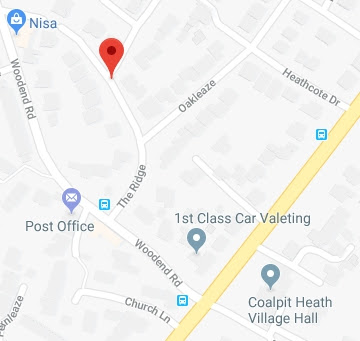 Option 2 : a stop just along Station Road from Yate Bus Station (a k a Shopping Centre) ...

... where the Y5 might call. fbb knew none of this whilst he was at the Wickwar Road stop, so remained bewildered. Then, encouragement; the sign announced that the Y5 was "due in 2 min".

Sadly, it was still "due in 2 min" TEN minutes later. USELESS.

Why "The Ridge"? No idea. Why "Due in 2 min" when it palpably wasn't? No idea. The whole episode just confirmed fbb's view that electronic screens are well-nigh pointless unless they give useful information in times of crisis.

It was obvious to fbb that his Y5 would never appear and his trip via Pucklechurch and Mangotsfield  ... 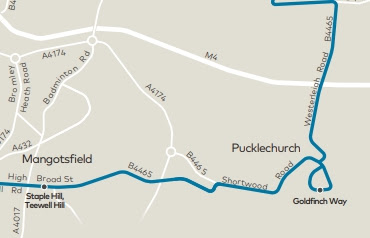 ... would not happen unless he waited for the next Y5.

Sulkily and disappointed, he caught the next Y1 back the same way as he came; all the way to Bristol. As he passed back through Yate bus station, there was a very dead First bus, complete with "rescue" van and a gaggle of worried blokes peering in at the engine compartment. 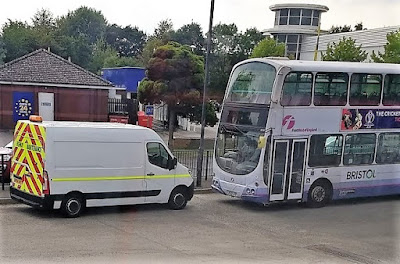 fbb suspects that there stood his busted Y5!

Apart from the failure at the end, it was a splendid day with fine weather and plenty of Public Transport Experience to explore and enjoy.

Despite a few niggles, First in Bristol seems to be doing a good job and getting it right. It is not First's fault that the Metrobus scheme was designed by politicians and consultants and is thus flawed at most levels - here's hoping James Freeman and his team can make a go of it. But all the rest is looking very encouraging.


Next Pony, Mule and Ass blog : Friday 14th September
Posted by fatbusbloke at 02:00