When fbb started "courting" the future Mrs fbb, she lived in London and he in Sheffield. But her family "pad" was in Glasgow; so the ardent suitor visited the home of deep fried Mars bars from time to time. Obviously a high priority was to visit the Glasgow Transport Museum.

It was opened in 1964 and was located in premises on Albert Drive, next to Pollokshields East Station. 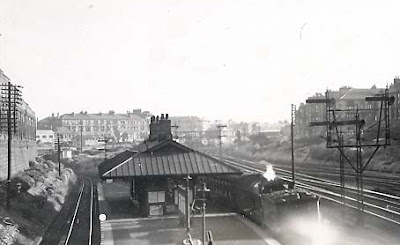 By the time the fbbs 2b travelled from Central Station, just one stop down the line, it looked more like this:- 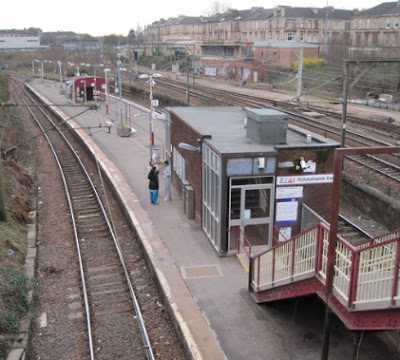 And now, poshed-up further, it has an up-fettled waiting shelter ... 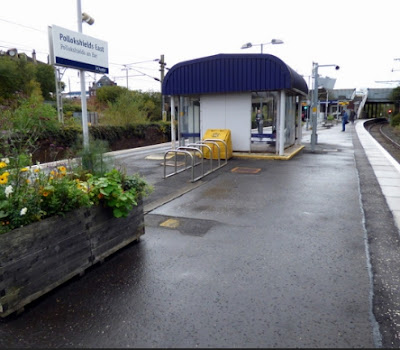 ...  and a dainty little booking office. 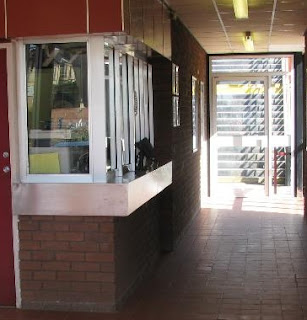 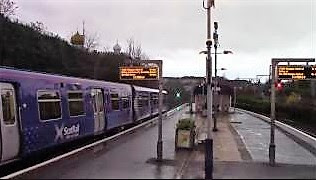 The station is one of many inner suburban stops still served by Scotrail's electric trains and has, as a claim to fame, its place on the well known Cathcart Circle line. 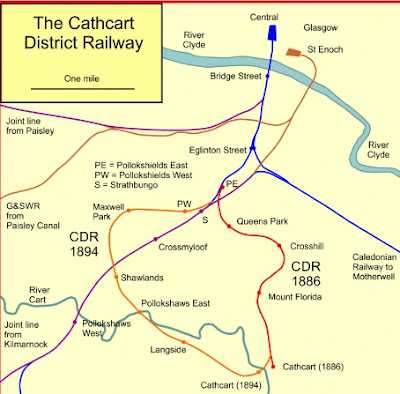 As can be seen from the map, the eastern section opened first in 1886 followed eight years later by the rest. It was never very successful financially, losing out to the cheaper and more frequent trams. Electrification revived the loops fortunes and the pattern of sevice was intermingled with trains to Nielston (southwards) and Newton (eastwards). 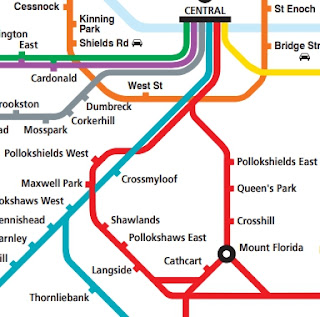 It makes for a complex timetable with true "Circle" trains now running only hourly in each direction (note "A"). 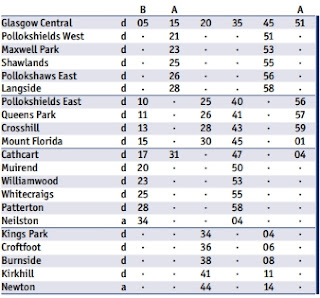 For the timetable aficionado, note "B" tells us that the 1005 departure leaves at 1006 and runs one minute later throughout - as if we cared.

And this is what the museum looked like when the future fbbs first forayed forth. 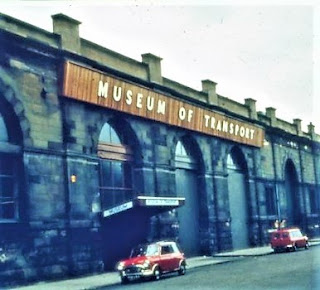 The fondest memory is that the cafe was the first place where himself consumed a Scotch Pie ... 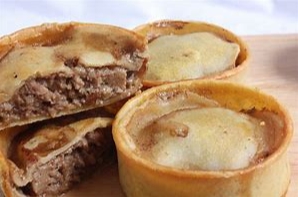 ... the contents of which have always been something of a Caledonian mystery.

And this is what that building looked like soon after its opening. 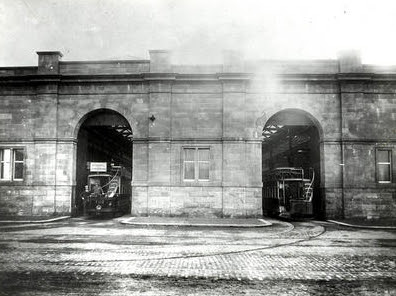 The Museum was installed in part of the former Coplawhill tram depot and works which filled a huge site. 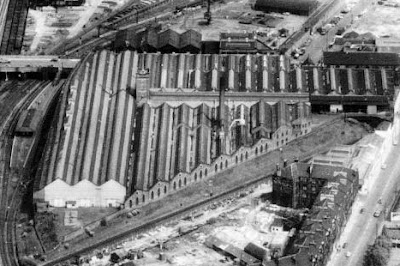 Pollockhields East station in its original guise is on the left with Albert Drive bridge upper left. The track plan for the depot was impressive! 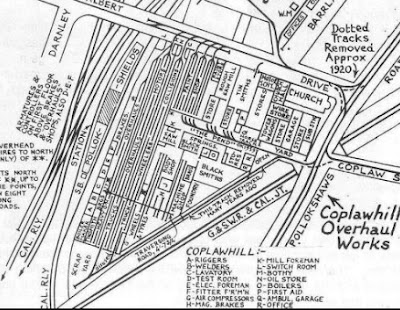 The railway lines in the area were complex in the extreme and well beyond fbb's comprehension, at least for the purpose of blogging. 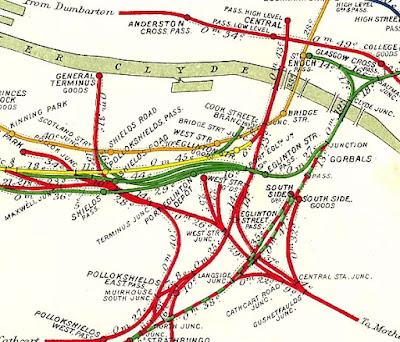 In 1971 the Museum became nationally famous as one of the places that exhibited the Apollo 10 space module. 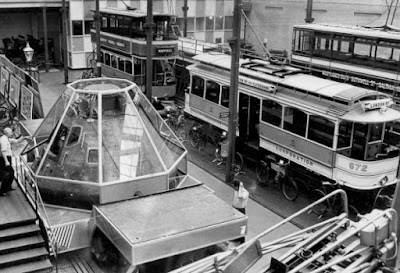 It looked very weird, next to somewhat slower and more dated trams!

Only part of the site remained in use as a museum, the rest was demolished. Part is now a Hidden Garden ... 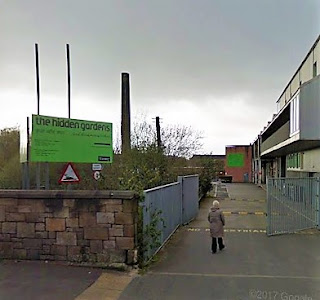 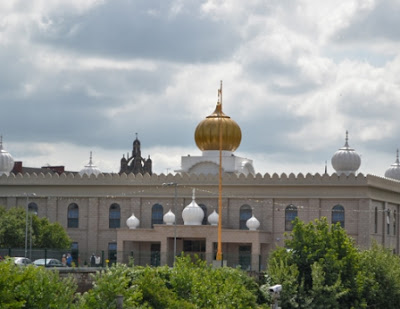 The former museum bit has been substantially refurbished ... 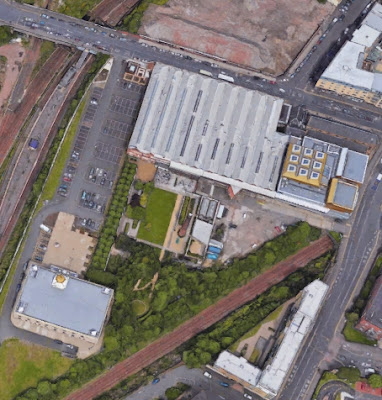 ... and is now a trendy Arts Centre but nostalgically called "The Tramway". 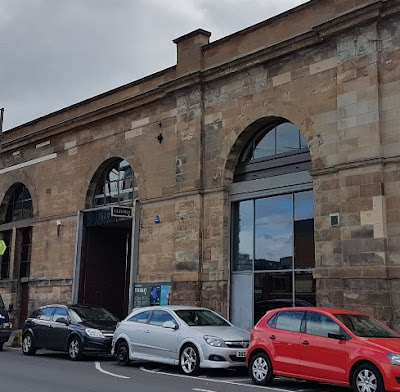 The Transport Museum had moved out in 1987, settling in a part of the Kelvin Hall complex ... 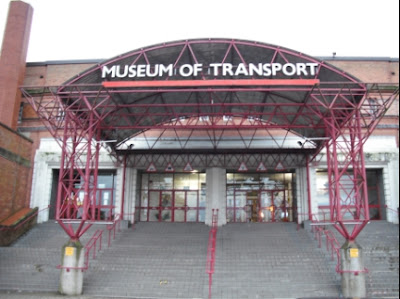 ... where we shall go tomorrow.


Next Coplaw, Kelvin and Clyde blog: Tuesday 25th September
Posted by fatbusbloke at 02:00