That is the question! T P G (Geneva Public Transport) produces an excellent map of two parts. One side covers the outer suburban routes of the Canton of Geneva. So at the airport, it only shows those routes which venture outside the city area. 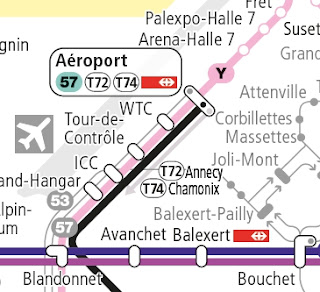 T72 and T74 are Train routes, presumably? No. It isn't T for train but T for long distance coach! 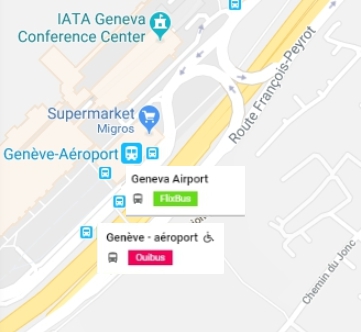 Both FLIXBUS and OUIBUS have stops marked nearby, but the T in T72/T74 may either be T for Transdev or even T for Transalis. Yep, Transalis it is. 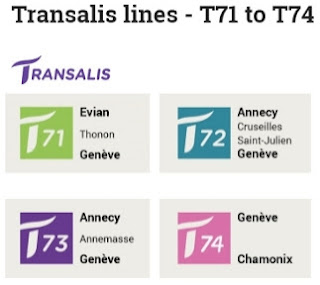 But back to our bus ride:-

So, if we want to check out bus route 5, we need the "city" version. Both are diagrammatic, which is OK for people "in the know" but may not be the best for curious visitors. fbb certainly prefers a geographical map, or something that makes a valid attempt to reproduce the geography as accurately as space and complexity might allow.

The first calling point after the airport is "Arena-Halle 7" ... 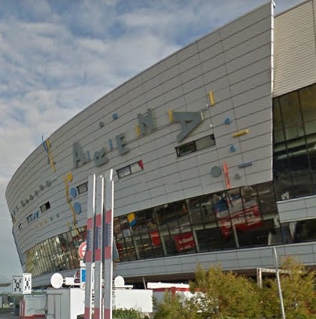 ... where fbb could only find (courtesy of Streetview) the TO airport flag and stop. 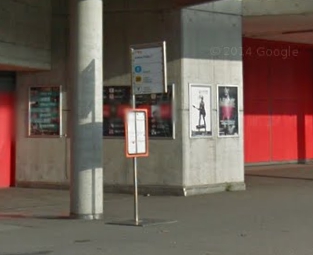 Service 5 then runs via roads unviewed by Google, calling at this block, named Palexpo. 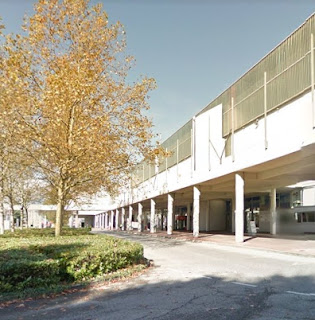 The infrastructure is typical of airports with loads of new buildings of indeterminate use (in this case for exhibitions) and little sign of anything resembling normal life!

But soon we find ourselves on a real road ... 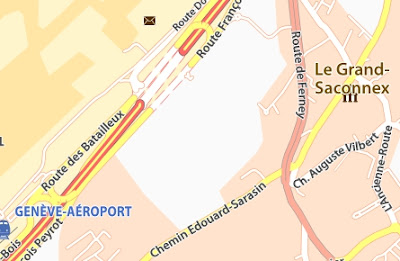 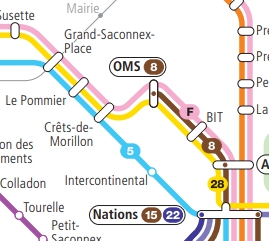 Most stops have simple names, not burdened by the unnecessary complexity of the UKs NaPTAN database. Here is "le Pommier" (the apple tree) ... 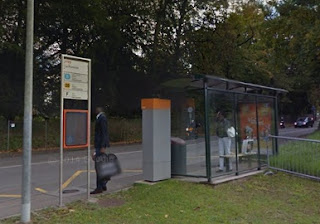 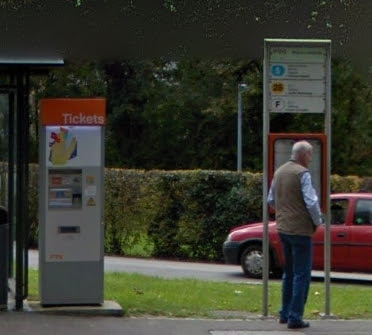 ... from the main road. Note the clear "flag" showing colour-coordinated route numbers for 5, 28 and F, a large timetable frame being viewed by passenger and the neat and simple ticket machine.


One stop is called "intercontinental" named after a hotel. 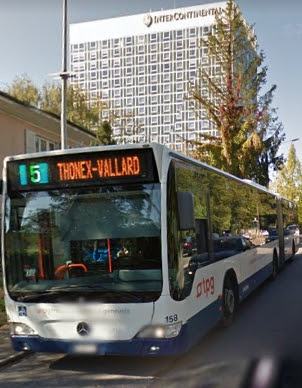 At "Nations" we have one of those delights of European transport networks, a mini-interchange where trams terminate and buses call alongside. 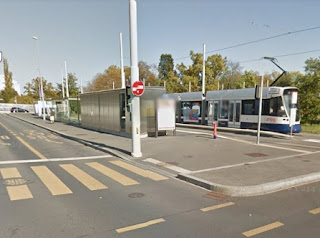 Whilst Google Maps shows all services at "Nations" as normal, the Michelin Streetmap only indicates the tram stops. 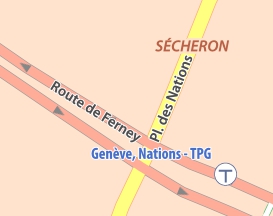 Readers familiar with the environs of Geneva will know that there is a railway station at Sécheron accessed by a splendid "tube". 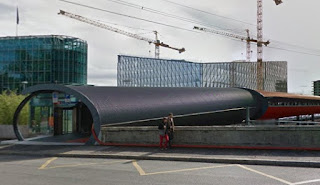 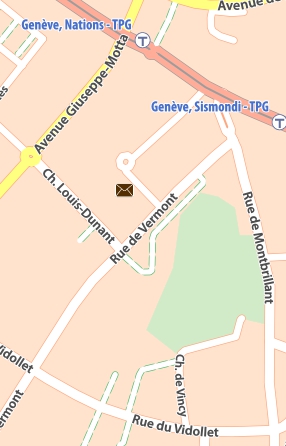 ... via Rue de Vermont and Rue de Vidollet before turning south to get to Gare Cornavin. 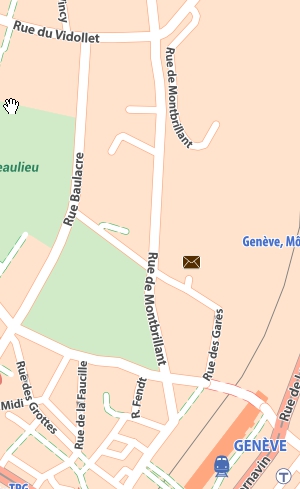 The T P G route diagram makes a reasonable fist of showing this ... 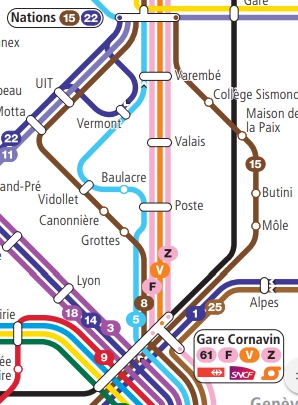 ... again, please note the simple stop names, "Vermont" and "Vidollet". At least it is easy to see why the stop "Poste" is so called ... 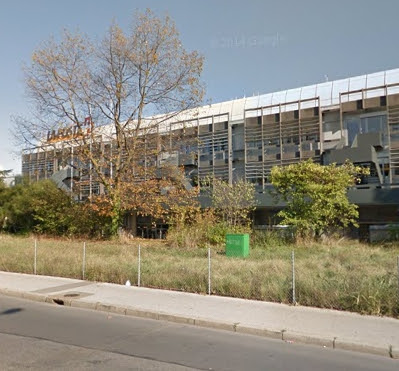 ... as it serves the massive Postal HQ for the City. The stop itself is a minimalist offering with no shelter and no ticket machine. 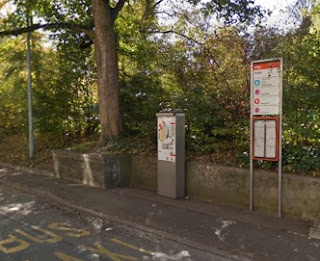 fbb's perception is that bus stops are more widely spaced than in the UK - more like tramstop distance - but others may interpret that maps differently. There are eleven intermediate stops between Aéropoprt and Gare Cornavin for a daytime running time of 19 minutes.

Clearly, regular users and those familiar with their route will have no trouble dealing with a city wide route diagram; BUT fbb confesses that he would prefer a proper geographical map - with the same detail, of course - to allow him to follow the route from his bus seat. See Paris.

Using a combination of T P G diagram, Google's Maps and Streetview and the Michelin map of Geneva, it was possible to follow the route and know what to look out for. It goes without saying that the Gare Cornavin stop is mightily obvious; but would a newcomer be quick enough to spot the difference between Grande-Saconnex-Place ... 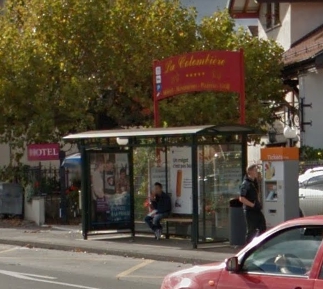 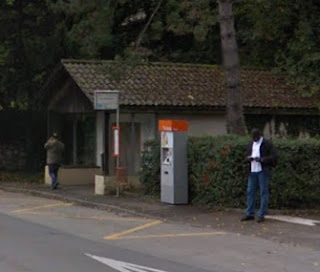 What is absolutely clear is that each stop name on the map, on the bus stop flag, in the timetables and via the journey planner is THE SAME no matter where the name appears. What a refreshing idea and oh so rare in the UK!

And, doubtless, there will be on-bus next stop screens and audio announcements - also using the same stop names? Maybe a Geneva visitor (or resident) can confirm this.

A bit more on the fares debate will follow later - needs a bit more researched after some of ther comments received.
-o-o-o-o-o-o-o-o-o-o-o-
A REMINDER
Tomorrow at 0655 the fbbs will be departing from Axminster Station aiming to arrive at Glasgow Central at 1559. Seems a long journey and a future blog will explain all. Saturday night is c/o Travelodge and Sunday they will be joining a Rail Discoveries Holiday at 1600 at the Holiday Inn Express.

Next fantasy blog - Saturday 22nd September
Posted by fatbusbloke at 02:00