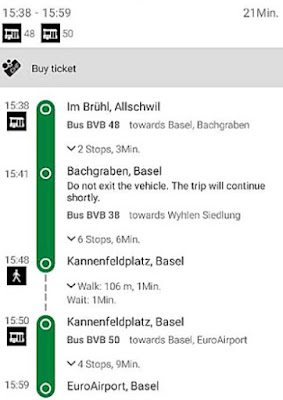 No 3 is is "experimentally" travelling by bus from his place of work at Im Bruhl to the Basel Airport and the journey planner (JP) has given him a 2 minute connection to included a one minute walk from stop to stop. Unfortunately the information he has sought does not tell him where the departure stop in at the complex unction next to the Can Field.

Neither does the JP vouchsafe what might happen if he misses the connection.

He need not have worried. The 50 runs every 7/8 minutes Mondays to Fridays (every 10 minutes Saturdays and Sundays). 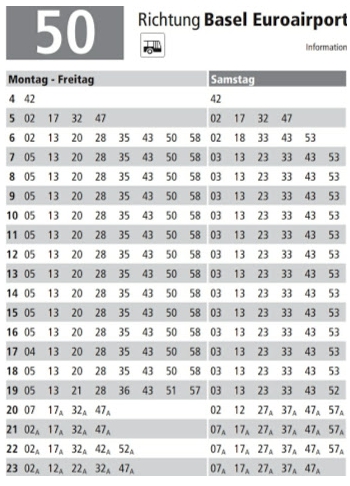 But there is still the problem of finding the stop. In practice, a kindly Baseler saw his obvious confusion and directed him. The 50 was two minutes late and he made the "tight" connection. But the lad does not speak Swiss German (very different from German German but he doesn't speak that either!).

Of course many Baselers speak English and feel sorry for their ignorant visitors and try t b as helpful as possible.

Could the problem have been solved on line? 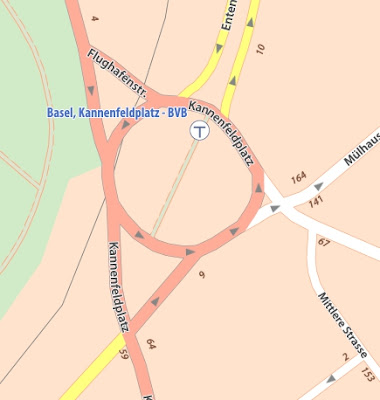 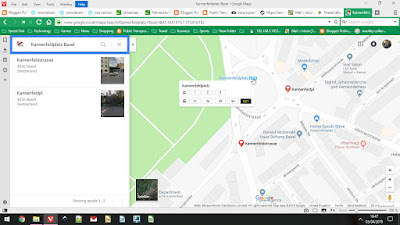 Even the great google, always aiming at World Domination, only shows one generic stop ... 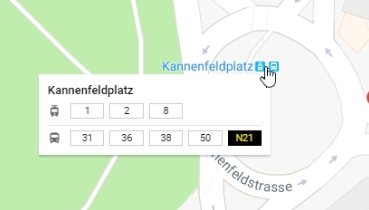 ... showing the four bus routes (plus night bus N21 - irrelevant) and three tram routes. Not bad, but only one tram route (service 1) calls at the stop, not three! 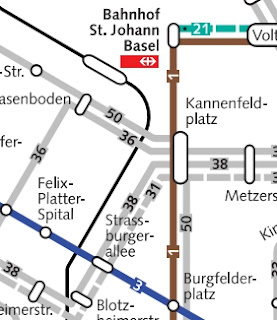 Fortunately a determined delve into the BVB web site provides the means of showing each tram and bus route on a street map and this, with some care and fortitude, can be persuaded to show all the stops in their correct (ish) location. 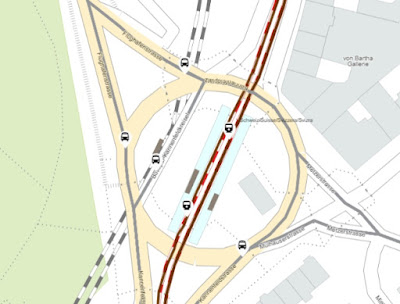 What fbb could not persuade the site to do, however, was clear the route maps and redisplay them individually. 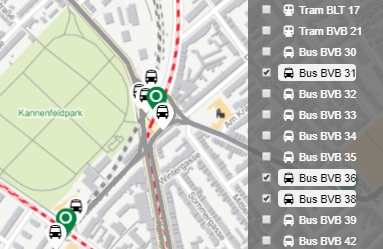 No doubt the old man was doing something wrong. But after several false starts, the following explanation emerged. To help his feeble brain, fbb has lettered the stops. 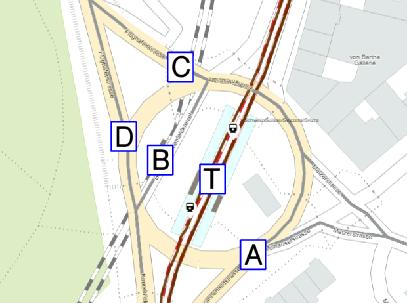 SERVICES 31 and 38 (the lad arrived on the latter) 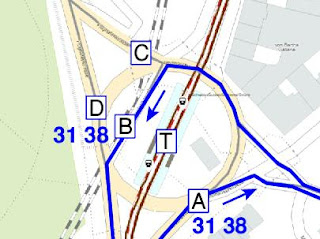 One initial difficulty was remembering that the good folk of Basel drive on the right, easy to forget as you traipse across crossings and in front of angry trams. No 3 son gets off at A ... 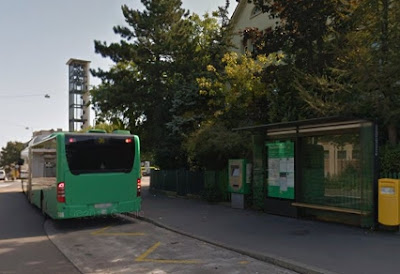 ... and returning to Im Bruhl will board at a stop B on a bus lane which runs parallel to the tram. 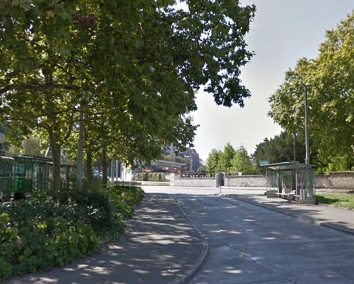 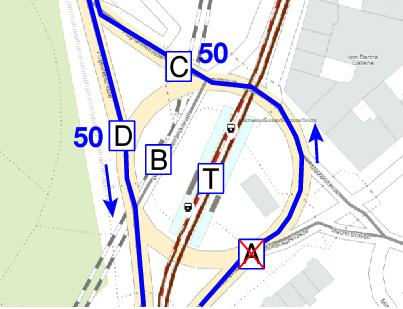 ... passes but does not call at stop A but uses stop C. 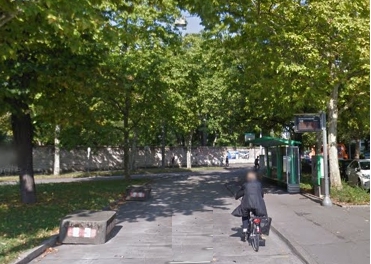 This is actually the route for all traffic to the airport ... 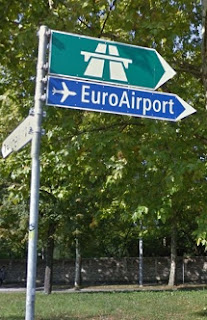 ... and the lumps are designed to discourage other traffic from overtaking the bus as it collects its passengers! 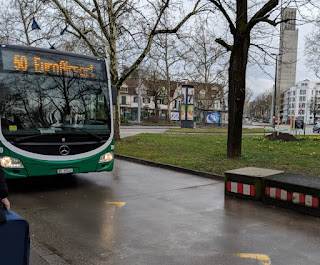 More effective at pranging suspension than the UK's potholes!

Returning from the Airport, No 3 son would alight a stop D 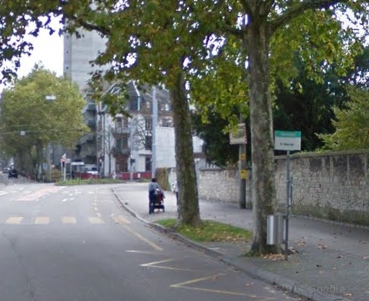 SERVICE 36
For the record, this route (not relevant here) uses a slightly different mixture. 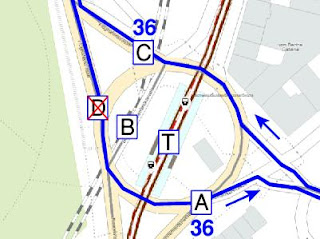 In fact, there is an obvious logic which you can work out once you know the answer.

Buses call at the stop which leads to the road used to LEAVE the complex roundabout. Apart from stop D, that is!

No problems for the lad as he cruised onward to his flight.

50 was fine, just spent the journey having people's wheely bags rolling over the bus as it tackled roundabouts and corners at an entertaining pace.

The 50 literally drops you on the upper deck of the airport and you fall into departures. 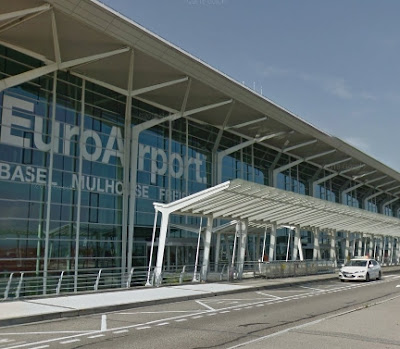 Saved 40CHF as that's the cost-ish of the taxi and the 50 is part of the TNW+ zone (probably) that I have a ticket for (monthy "season"), also took about 7 to 10 minutes longer which isn't bad.

So really you could buy a TNW+ for 105CHF and you'd only need to go from the airport thrice in a month for that to pay back.

But you must remember that there are TWO Airports in one. Because of customs, exchange rates and politics, there is a Swiss chunk (RED) ... 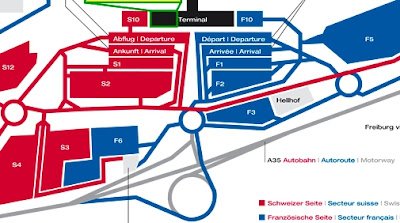 Make sure you get the right "sector"!

Of course, once you have done it once, it all becomes simple and logical. But it ain't half hard when you arrive at Kannenfeldplatz for the first time. Even the clockwork-efficient Swiss haven't quite got it cracked at the Can Field! 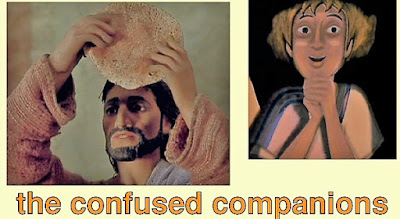 One of he most compelling Resurrection appearances is usually known as "The Road to Emmaus". It concerns two followers of Jesus leaving Jerusalem, saddened and dejected because their hoped-for "Saviour of Israel", their "King of the Jews" has been crucified, is dead and buried.

As they trudge wearily home, a stranger joins them.

The stranger said to them, “What are you talking about to each other, as you walk along?”

They stood still, with sad faces. One of them, named Cleopas, asked him, “Are you the only visitor in Jerusalem who doesn't know the things that have been happening there these last few days?”

“What things?” he asked.


“The things that happened to Jesus of Nazareth,” they answered. 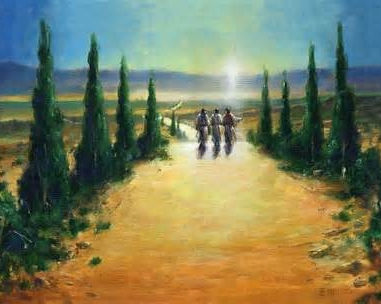 Maybe unrecognised because he was dead!

He is invited into the disciples' gaff.

He sat down to eat with them, took the bread, and said the blessing; then he broke the bread and gave it to them. Then their eyes were opened and they recognised him, but he disappeared from their sight. They said to each other, “Wasn't it like a fire burning in us when he talked to us on the road and explained the Scriptures to us?”

The resurrection narrative is still a fire burning within those who choose to explore and understand its truth.