But First, From The Real/Unreal Railway 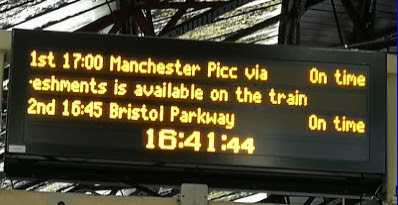 Thanks to Paul from Bristol who sent his baffling example of reliable modern technology at work. If the first train at 1700 is on time, how can the second train be on time at 1645?

As Paul writes, "this makes no sense."

--------------------------------------------------
Maintenance Matters; Size Matters!
It has been a long, hard winter after last years wet and uninspiring summer, leaving a backlog of routine repairs and re-fettling to be tackled before the busy summer season gets under way. Just like the big railway under the dubious care of notwork rail, fbb is referring to his minimal model railway, set in the non-extensive grounds to the rear of fbb mansions.

Snow was a problem - twice! - a rare occurrence in Seaton. 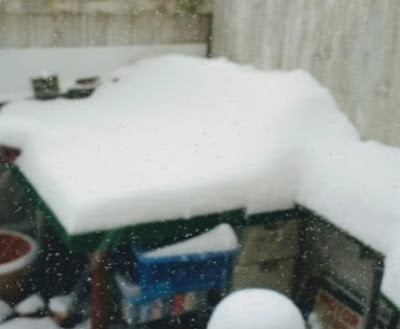 Earlier in the year, heavy wind lifted the roof from his hand-made carriage shed and deposited it summarily on the paving slabs. 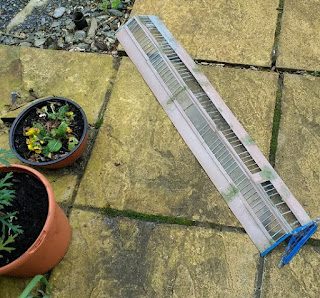 This impact removed dozens of glazing bars that fbb had toiled last year to replace!

But one side was completed last week (at last) as fbb installed 57 new glazing bars in a very challenging and fiddly bit of cutting and gluing. 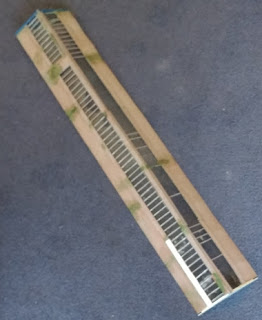 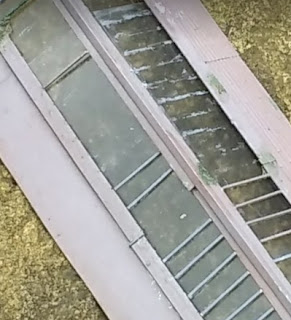 fbb needs a boost of enthusiasm to get cracking on this one and perhaps a further rethink on the construction methods!

Mostly the layout is quite resilient to weather, but, as in the real full-sized system, bits fall off and have to be fixed on again ... 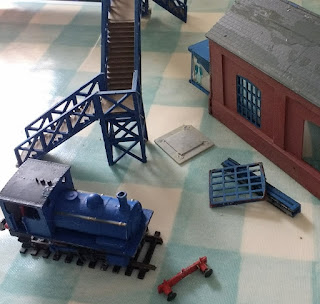 ... easily accomplished with a squeeze of glue!

Just as Nature seeks to regain the upper hand on the big railway, fbb's largely plastic layout has been invaded by out-of-scale weeds. 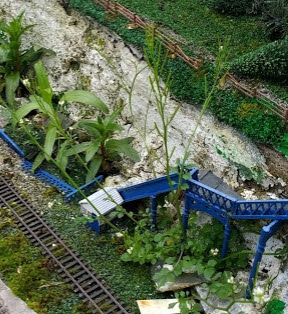 Fortunately they are a little easier to remove than the real thing! 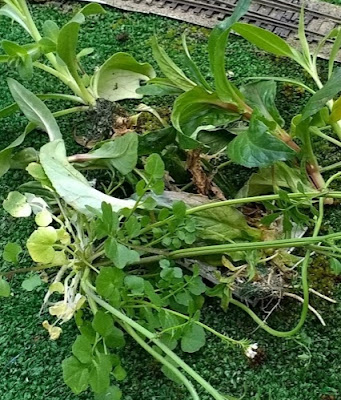 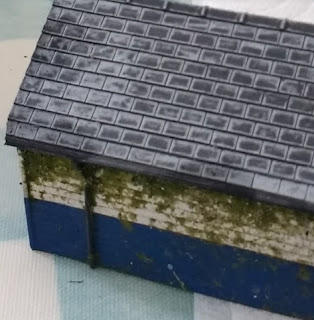 ... necessitating drastic measures. Fortunately most of fbb's buildings are not fixed down, so (with domestic permission) a transfer to a bowl of soapy water and the application of jiggles with a soft-ish paintbrush ... 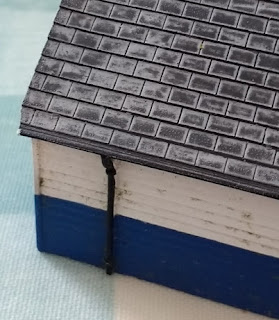 ... restores most scummy bits. Sometimes neat bleach is needed which, surprisingly, does not harm the paintwork, courtesy of little pots of Humbrol enamel. 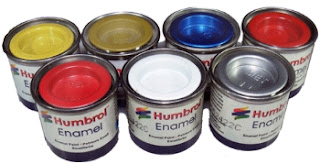 But therein lies a snag. Windows begin to fall out! fbb reckons that if you took a real house, immersed it in a large tank of soapy water and jiggled it about, the windows would not survive. With one of fbb's edifices, they didn't ... 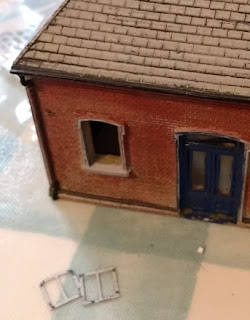 ... neither did the rectangles of plastic "glass" to which the frames were not very well glued. Several of the bits just disappeared, possibly down the drain in the sink used for the washing process.

Window frames are really difficult to make, especially for a ham-fisted prize bodger-upper like fbb. So off to Peco's shop in Beer to look for windows. There was a pack thereof, produced by Ratio (part of the every growing Peco business) - but they were too small.

What was needed was a complete refit ... 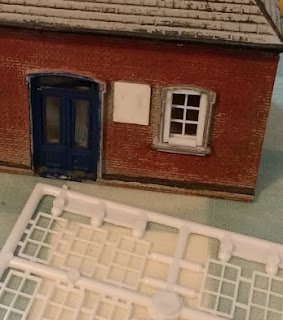 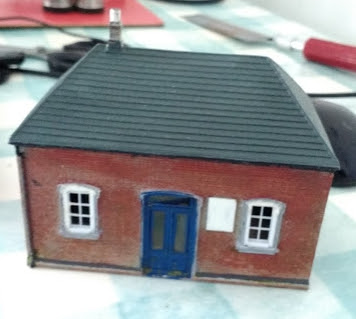 ... from a normal viewing distance and better than no frames at all.

Fences are a bigger problem. Peco's brown fencing is made from a plastic that is too flexible when new but becomes self-destructively brittle after a few months in the bracing Seaton air. 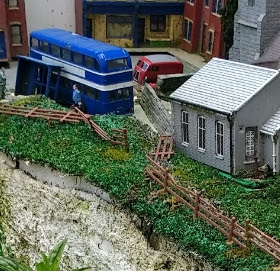 Fortunately a chum from Church brought fbb some unwanted bits from a charity shop. These are rigid and might (?) survive. But things don't glue easily to plastic grass! 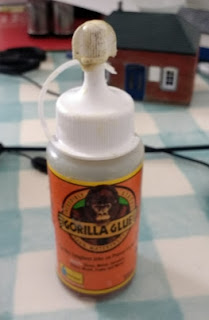 It is weird and expensive stuff, not really designed for sticking plastic fence to plastic grass! But when it reacts with a bit of dampness it sort of froths up and oozes into all the crooks and nannies, gripping everything like, erm, glue!

The snaggeroo, however, is that you need to hold the bits in place for 20 minutes. Impossible physically when leaning over to the back of the layout. But, balance a model FLF bus on the top ... 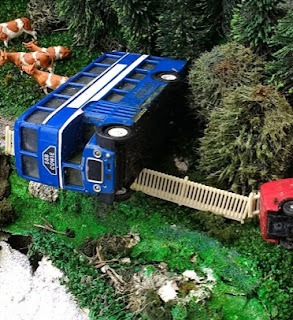 ... and the result is a firmly fixed fence. 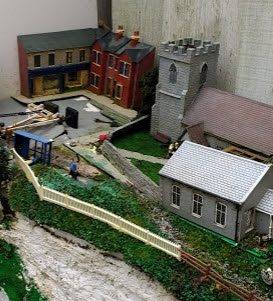 Whether it is cat-proof remains to be seen! There is still more tidying to do around Church Square, but at least the residents of Peterville village won't fall to their untimely death down the quarry face!

But the best part of Thursday last was spent on these simple but time-consuming touch-up and repair jobs, (interspersed with an occasion break for the World Snooker) leaving Friday to get the trains running.

But it rained all day.

Even a gung-ho and slightly irresponsible fbb would not countenance taking mains electricity outside when it was raining. Even 12,000 millivolts do not like the wet. But at least some of the track was de-coked on Thursday. 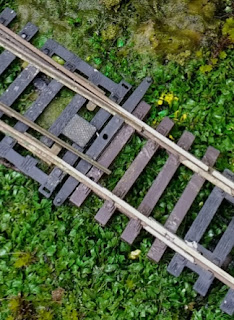 So to a dry and chilly Saturday to connect up the track and get trains running.

Now here is a question. fbb mansions is not really very big (especially if you steer clear of the servants' quarters!?) so how come a large two metre long white extension cable with 13 amp three pin plug at one end and a two way rubber socket at the other can vanish completely? Not only that, but attached to the socket is (or was?) the transformer needed to power the controller and thus the trains. 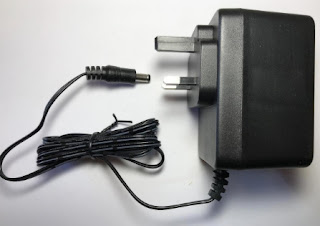 Much of Saturday morning wasted trying to rig up an alternative.

Kick the cat (not really) have a cuppa, watch Ronnie being knocked out of the World Snooker and give up looking until a flash of inspiration helps with at least the black box's location.

Then at 1800 yesterday an eagle-eyed Mrs fbb found the lost window parts in the plug hole (see above) so fbb could have put the old ones back. 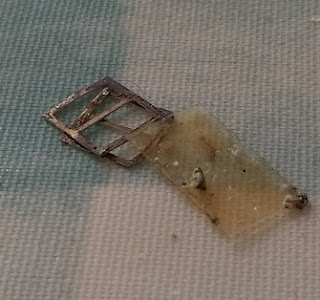 Perhaps he should abandon railway modelling and take up embroidery?

Back to the big stuff tomorrow. and more bits and pieces up with which to catch!