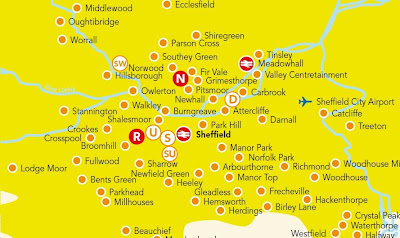 Take a little look at this extract from a map of Sheffield.   Things to note are:-

Fullwood should be Fulwood (one "l" not two).

Birley Lane and Shalesmoor are road names, not district names and Valley Centertainment is a commercial Leisure Park; again, NOT a district of Sheffield.   Why does it get free advertising when the more important Meadowhall - a major regional shopping centre - is only shown as a railway station?

And where are the railway stations at Darnall and Woodhouse?

And Sheffield City Airport closed to commecial flights in 2002 and utterly in 2008 - it simply no longer exists.

And significant communities like Chapeltown, Dore, Handsworth, Totley, Firth Park and Woodseats are expunged from existence completely; whilst (omitted) Nether Edge is much more important, with a bus every 10 minutes, than Sharrow (included) with only a paltry hourly service.

Like so much stuff on-line, it is pretty obvious that the creator of this cartographic chaos has never travelled on Sheffield buses and probably fails to understand the basic geography of the city.   Can the cartographer actually read a map?   Harsh criticism - after all it's only a diagram.   But when you realise what the diagram purports to show...

... It tells me where my Plusbus ticket is valid.   Plusbus?   A bargain way of adding local bus travel to your rail ticket.   And a very good deal it is, too, with a fare of £3.50 for a day's travel throughout the Sheffield area on all operators' buses.   So what EXACTLY is the Sheffield area?

Helpfully the web site also provides a downloadable page of "zone boundary details" which provides comprehensive details of the limits of validity of the Sheffield scheme.   Or does it?

It's good to know that you can travel as far as Chatterton Farm!   It would be even better if you, or, more importantly, a typically jaded bus driver, knew where Chatterton Farm might be.   What EXACTLY is this "zone boundary" list?   "Barnsdale Bar" is the clue.   The list is actually the boundary points for the whole of South Yorkshire County; stretching from Darton in the north to Low Edges Estate (Sheffield) in the South and from Fox House in the west to beyond Thorne in the east.  [perhaps that's where Chatterton Farm is?]

Does that REALLY mean that a Sheffield plusbus ticket would allow me to travel all the way to Barnsdale Bar, roughly seven miles north of Doncaster?   And, more worryingly, would the driver of Arriva's 496 know that a plusbus ticket marked "Sheffield" was valid from Doncaster? - especially as the self-same driver is probably based at Wakefield in West Yorkshire.   An even more telling question when you know WHAT Barnsdale Bar is? 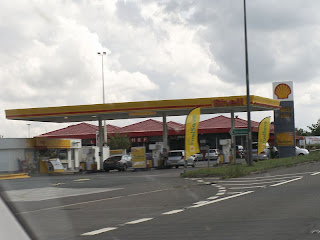 The picturesque Barnsdale Bar.
And this is just typical of the trouble with Plusbus.   What ought to be a spectacularly good scheme, used by millions each day, turns out to be complicated, unclear and extremely risky.   Fares and availability vary widely; "zones" and possible destinations are woolly and the potential user needs to spend tedious hours searching innumerable web sites to discover the devilish detail - like times and routes of these very cheap bus rides.    And remember that, in most cases in order to find a timetable, the frustrated user almost always needs first to know the route number and, possibly, the operator's name.   Boy, it ain't easy!
So ... jump to it, Plusbus!   Let's have a proper web site with route maps and timetables.  Let's have a standard fare all over the country and clearly stated availability rules.   Then, maybe, just maybe, people will start buying it!   And in case you wondered, many plusbus maps are equally confusing and misleading - try your area and see.