After a series of "press this" instructions (Why?   Is it Traveline or not?) the eventual conversation went something like this:-
fbb : could you tell me the frequency of buses between Wantage and Oxford tomorrow (29th December)?
tl : when do you want to travel?
fbb : I just want to know what the timetable is; so I can make plans.
tl : there seems to be an X30 and a 31.
fbb : do you have timetables there?
tl : we've got three timetables here.
fbb : so how often do the buses run?
tl : theres an X30 at 0906 and another one at 0936.
fbb : thank you very much!


So, does it matter that Traveline (costing millions of pounds) doesn't have timetables?  Yes, it does.    At times like Christmas, non-standard services are often operated. 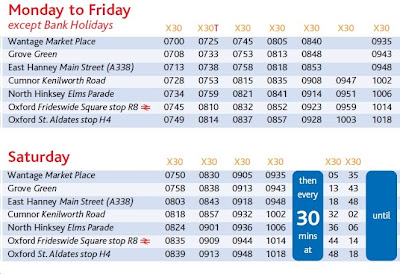 If Stagecoach were operating a SATURDAY service on 29th December, then peak hour buses would be very different from a Monday to Friday schedule (see above).

A diligent search of Stagecoach's web site shows that a Saturday schedule was, indeed, the order of the day on 29th and 30th December.   A useful and important piece of information which Traveline was unable (or unwilling) to provide.
A subsequent enquiry by fbb about frequencies on New Year's Day elicited a slightly more helpful reply - namely that ONLY service 31 would be running at 56 minutes past each hour from Wantage.   But was that information good enough?

In fact a very limited SUNDAY service was operated throughout Stacecoach Oxford's empire - mostly finishing about 1800.   Not much help if you want to visit a chum for the evening; but VERY frustrating if you set out on the basis of Traveline's advice and then find yourself stranded and in need of an (expensive) taxi back home.
fbb (like a small dog worrying a captured rat?) then turns to the Traveline web site and this is what is available:-

It tells fbb that service 31 does run on 1st January and it appears that he can press a button to get the timetable for "New Year's Day" - except the button does absolutely nothing!    Of course, the enquirer would need to KNOW that service 31 runs between Wantage and Oxford before searching.
And finally!   Traveline call centre advises that (on 29th Dec) X30 buses leave Wantage at 06 and 36 minutes past each hour and (on 1st Jan) the 31 leaves at 56 minutes past each hour.   But the printed timetables show 05, 35 and 55 respectively.   What's going on?
The most worrying thing about Traveline's data and delivery system is that it gives WRONG TIMES.   OK, in this case only a minute different but it can be much more.   The reason is a bit technical but, suffice it to say, it is a very common fault.
To summarise:-
1. Traveline doesn't have timetables only journey plans (or, if they have them, they don't use them.)
2. Their system gives out the wrong times anyway.
What is DESPERATELY needed is a repository for ALL bus timetables in Great Britain - with clearly indexed schedules for "odd" day's operation.   An on line Great Britain Bus Timetable, remember that?
So who CAN you ask?
Posted by fatbusbloke at 18:37