The end ... and the revelation!

Joe Saer and his (very) pregnant fiancee had travelled (thus far) from their home near Penygroes (North Wales) as far as Ammanford.   A cold coming they had of it in Dercember 2011; but now they had only two bus journeys to endure in order to complete their tortuous trip. At 1515, the 103 would take them to the delightful town of Llandeilo, nestling in the Dyffryn Tywi ... 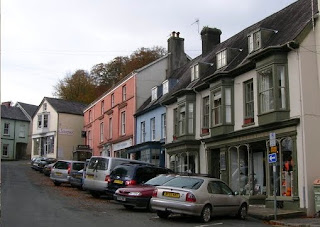 ... where they arrived at 1540 with a healthy 17 minutes to wait for their very last piece of public transport on a very, very long day.   Tired and desperate for a warm fire (and Maerwin for a comfortable bed!) they clambered aboard Morris Travel's once a week service 283 - bound for Llangadog at 1557. 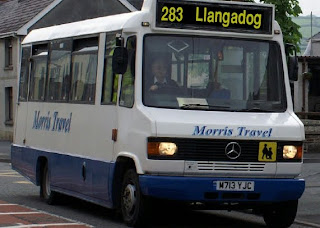 Morris Motors timetable shows this last leg as the critical Saturdays only trip -and the travel weary couple had made it!

There ware no rooms left at the pub in the village, so they had booked into a self-catering converted barn - an old Welsh cattle shed.   It was just after a quarter past four and their journey was over. 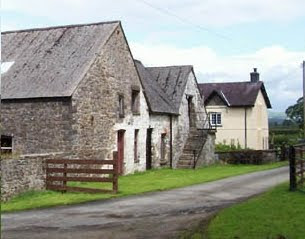 Here, at last, they settled down for the night.

The baby came in the early hours - two shepherds, on duty to protect their flocks against the cold, popped in with a hot drink.  A little later Doctor Mel King arrived (accompanied by his two slightly inebriated brothers) from a Christmas Eve party.   The three Kings, excited at being part of the first Christmas baby in the village in living memory, brought a selection of somewhat inappropriate gifts; some golden chocolate coins from their tree, a bottle of pungent perfume and some soothing ointment for Maerwin.   Doctor Mel gave Maerwin and baby, to be named Joshua, the once-over and pronounced them A-OK and very special indeed.

The baby slept peacefully - no crying he made! - in an antique cot made out of an old feeding trough.   Meanwhile, the little town lay still; as the silent stars went by.   What a night!   And now it was Christmas Day!

As Maerwin said at the time, "no-one could possibly have ever been through such a journey and such a birth ever before..."!

"Well, you wouldn't believe it if they had, would you?"

Glossary:   'Saer' is welsh for carpenter; 'Maerwin' is Mary; 'Joseph' is Joseph; the Greek version of 'Joshua' is ... Jesus!

They started their journey at Nazareth (Welsh has no "z" so it is more correctly spelled with an "s") near Penygroes and finally arrived at Bethlehem near Llandeilo. 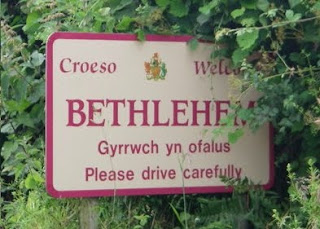 For many years, the Post Office at Bethlehem has provided hand-stamp facilities for first day covers bearing the Christmas stamps.   The current post office opens only one day a week in the village hall - but works every day at Christmas to stamp special mail. 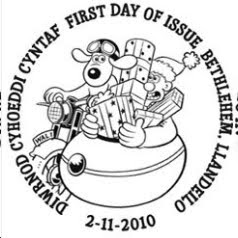 The one-day travel schedule was workable on Saturdays in 2010 as per fbb's diagram.   fbb has assumed services still operate to the same schedule in the futuristic 2011 report when Christmas Eve falls on a Saturday! 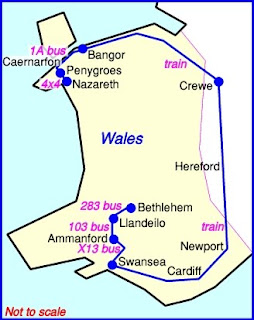 Of course, THIS narrative is purely a fictional nicety - the 2000 year older original changed the history of the world and offered to change the course of lives, then and now!