Junior Choice is a BBC Radio programme originally broadcast from 1954 until 1982 with Christmas specials from 2007 until 2015 and again since 2017. Originally broadcast on the BBC Light Programme on Saturday mornings. Its precursor from 1952 was entitled Children's Choice, echoing the weekday Housewives' Choice.

The programme played requests from children of all ages. For the first 11 years of its run, the programme was introduced by Derek McCulloch, Uncle Mac. 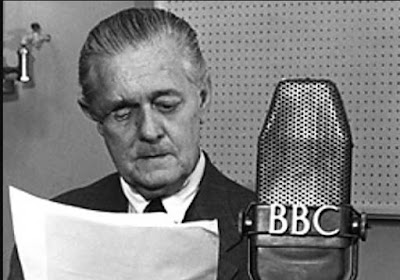 The signature tune until the mid-1960s was Puffin' Billy by Edward White played by the Melodi Light Orchestra.

It was one of the show's all-time favourites that came to mind as fbb was compiling this blog. Our loyal readers may well remember a slightly different version - but for fbb, well now, it was a long time ago. 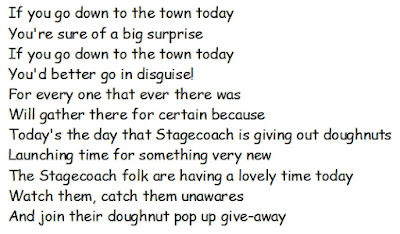 Sadly, by the time you are reading this, it may be too late as stocks may have run out. But here's the PR stuff!

We will be placing pop-up stalls in central town locations along the route, where our colleagues will be on hand to chat with you about the new route extension.

So, come along and meet our team and we'll even be handing out free doughnuts and coffee!* 🍩☕ (here are tiny doughnut and coffee icon - may not work on all "devices!)

In passing, fbb is unsure of the difference between a "pop-up" stall and a "stall", except that the former maybe more trendy for the youff. Surely all stalls are "pop-up".

Anyway, this jollity is promoting a "new" bus route which starts TODAY! 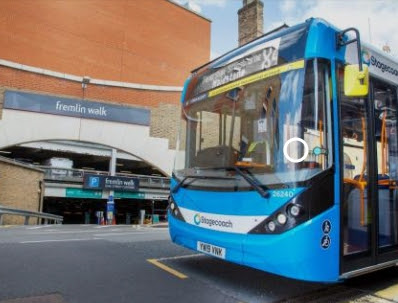 For those, like fbb, who are less that familiar with the retail therapy available to Kentish Man (and Woman), fremlin walk (above : note lower case "f", more trandy that proper orthography) is in Maidlstone.

Fortunately, Stagecoach are gracious enough to supply a timetable ...

... as well as various stages of explanation. 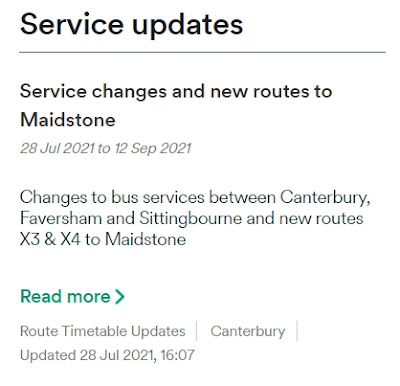 So fbb did that!

Need to get to Maidstone? Our X3 and X4 buses provide all new journey opportunities if you’re travelling to Maidstone - from Canterbury, Faversham or Sittingbourne.

Whether you’re commuting to work, taking a shopping trip, or visiting friends and family – our new X3 and X4 routes can take you there.

With no direct trains running from Sittingbourne or Faversham to Maidstone - the new routes offer speedy travel solutions for your journey.

Our combined X3 & X4 services operate every 30 mins, with route X3 running via Bysing Wood and route X4 via Ospringe - to pick up as many locals as possible.

Take a look at the full timetable or plan your journey now using our ‘plan a journey’ tool on our website and app, simply enter where you’re travelling from and to and at what time, and it will tell you the best journey options!

One of the problems with today's bus publicity is that is designed for the instant on-line brigade. There is no depth of information. The mention of Sittingbourne and Maidstone made your aged author prick his ears up. 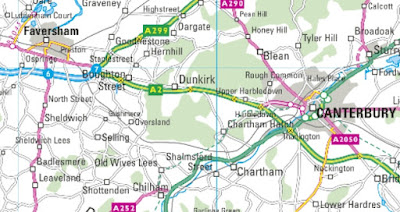 From Canterbury eastwards we take the A2, the route chosen (but in the opposite direction) by Chaucer's weary plodding pilgrims each telling a Canterbury Tale. Not only did Geoff write in Middle English to make life unbearable for GCSE students for evermore ... 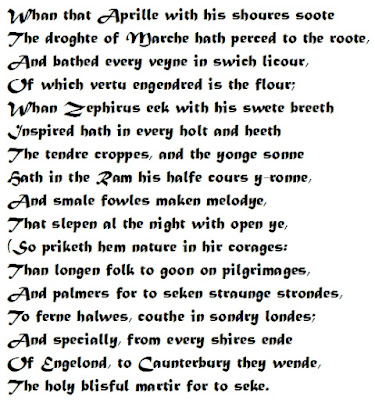 ... but his sentences rambled on for ever! fbb had to intercede with a full stop in defernce to his readers most of whom have rapidy returned to watching the Olympics in defence against Mr C!

Continue westwards along the A2 and you come to Sittingbourne. Ask the sainted Traveline for a journey from Faversham to Sittingbourne and you will only get the train; with three departures every hour, currently. 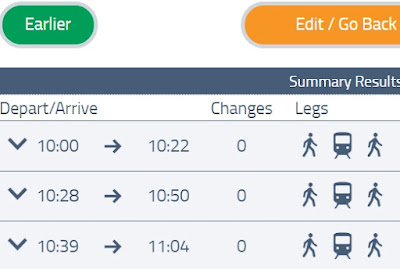 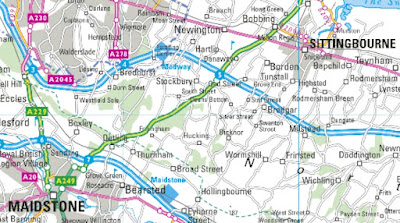 But hold fast there, we hear you cry. Is not Maidstone the terrotory of Arriva?

And Arriva 334 currently runs every 30 minute from Sheerness (off the map to the north) to Sittingbourne and on to Maidstone.

(Sorry about poor production of the above - it does have a line for Maidstone at the bottom). 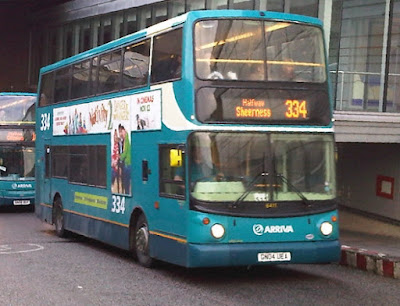 Maidstone bus station (in The Chequers shopping centre) is not the nicest place in Kent. 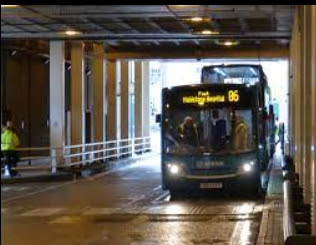 It is pretty much gloom-central! 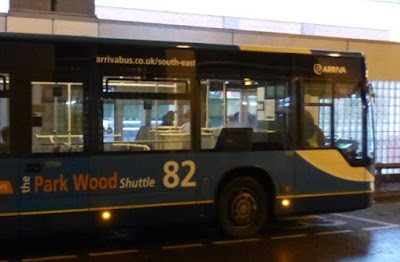 It is currently closed for a £1 million up-fettling although some locals would prefer John Betjeman's solution for Slough to be meted out in Maidstone. 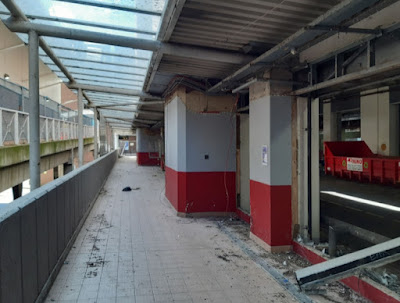 Artist's impression show how really lovely it will look when it is finished. 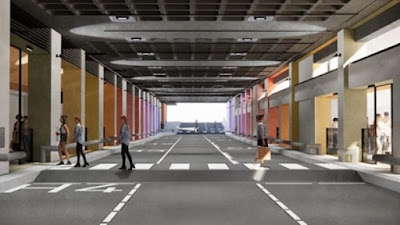 Hmm - a million smackers looks far to little to make something wonderful ... 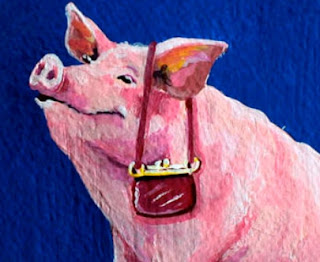 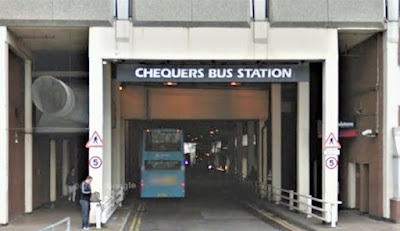 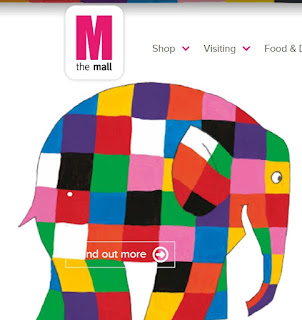 But, as ever, fbb digresses.

But is it entirely brand new! 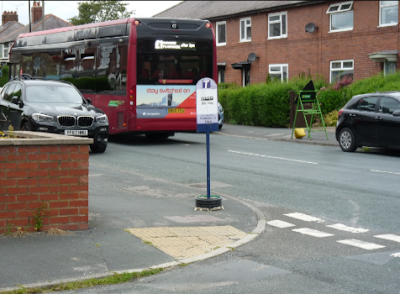 The rear end of a Transdev Harrogate electric bus ... 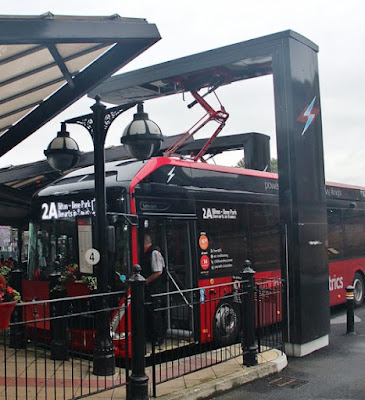 ... somewhere in Harrogate (or Knaresborough?).

It is passing a temporary bus stop, pinched from Travel South Yorkshire; last spotted in Leeds! 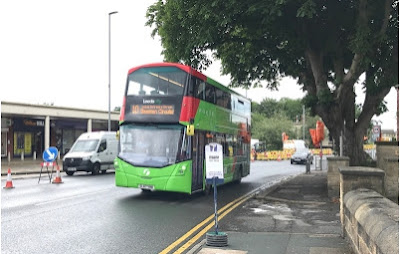 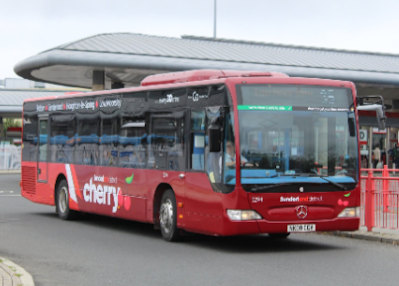 From Berries to Cherries. Another fruit from Go Ahead ...

Great policy Mr Brown. Will you be arranging for a working web site? And will you be telling your call centre people where Middlesbrough is? (see yesterday's blog).