No Treat At Treeton : Losing Heart At Harthill (3) 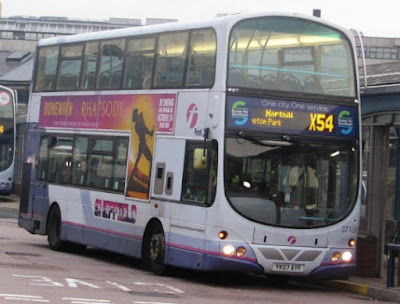 So - to get from Sheffield to Treeton and on to Harthill we need to catch a service X54. The route runs basically hourly seven days a week, as with this example from November 2020. 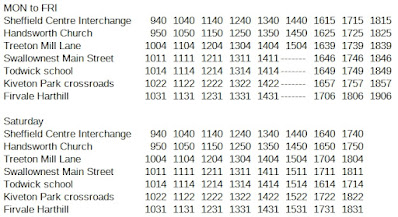 There was a big gap between 1340 and 1614. But a better timetable has been operating until this week.

But, beware. The above is the school holiday schedule. below we have the schoolday version.

Now there is nothing between 1235 and 1610! Also note that the Saturday timetable remains unchanged with a running time from xx40 to xx31 (see above) minutes past the hour. But why do Monday to Friday buses run 5 minutes earlier throughout from xx35 to xx26. This seems potty.
But then we come to the new timetable which is starting on Tuesday 31st according to the PTE, but (so far at least) NOT changing at all, according to First.

The gap is now from 1331 to 1610 and the running time is from xx31 to xx22; advanced by ANOTHER four minutes. Again, the Saturday timetable is unchanged.

Why Do They Do This?

With inadequate publicity on-line and NO printed publicity, passengers are, inevitably, going to turn up for buses that have already gone.

To offer your customers a two hour and 39 minute gap is just appalling. It's only saving grace is that it is a bit better than a previous three hour and 35 minute gap!

Of course, you want the buses to carry lots of school kiddies despite the fact that your adult passengers are there seven days a week and may well want to use other routes on your network.  But hey, who cares if you lose a few more passengers?

And then there is the Sunday Silliness.

On Sundays the X54 is operated by T M Travel on tender. But it isn't the SAME X54 as on weekdays. 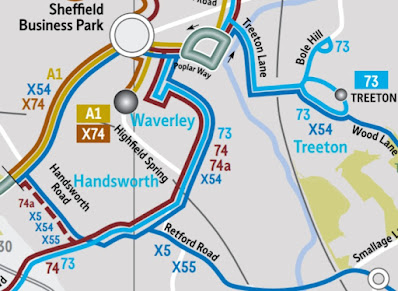 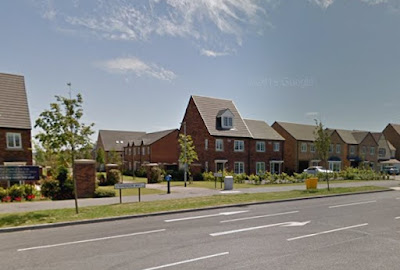 ... new housing on former industrial lane between Catcliffe and Orgreave. Waverley is not "good bus territory"; there are plenty of cars in drives and beside the kerb and an hourly service 73 complements the X54.
But on Sundays T M Travel's X54 eschews Waverley and zooms down more of the Parkway, then diverts to serve a small industrial estate that used to go under the name of Parkway Market, home to Sheffield's purveyors of wholesale fruit and veg. 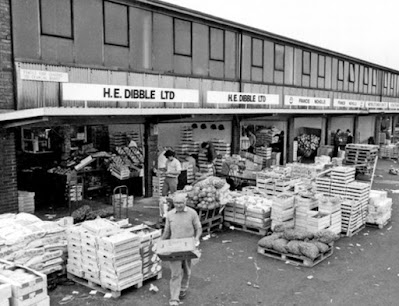 The traditional fruit market is still there, but much reduced in size and is now replaced by general industrial units. The Sunday X54 leaves the Parkway (road) at the junction. bottom right ... 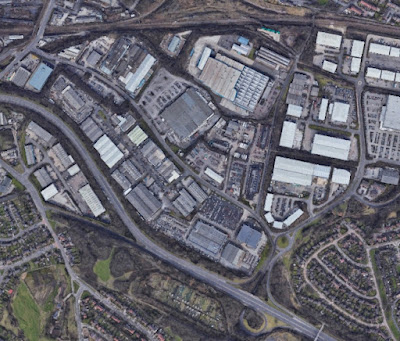 ... and runs via Parkway Avenue (parallel with the main road) and then via "ordinary" roads into the bus station.

Of course, the industrial estate is almost totally deserted on Sundays, which must be why the PTE pay T M Travel to run an empty bus that way.
Would it not be more useful to run the Sunday service via Waverley?
Why Do They Do This? 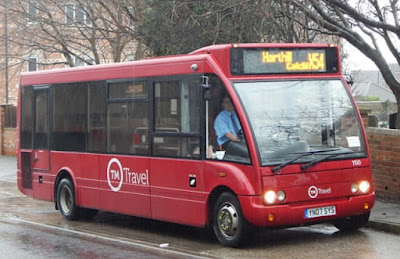 At least they don't allocate a big bus to the X54 - and here's one at the Harthill turning circle. 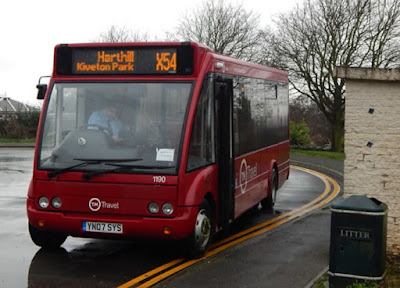 Keen readers may remember an X26 service from Sheffield to Rotherham via Harthill. Well, in a sense this is still what happens with the current timetable. 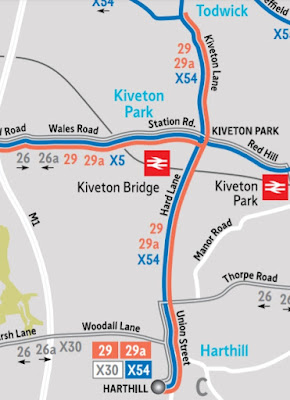 When First's X54 (BLUE) arrives at Harthill, it turns into a 29 (ORANGE) and toddles off to Rotherham. 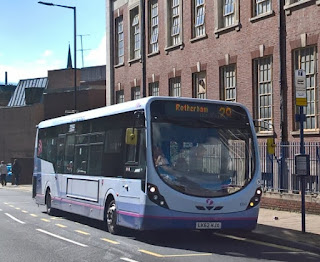 When First chooses not to run, again we have T M Travel 29a, operating early mornings, evenings and all day Sundays.
Actually there are two 29a routes, one for early morning journeys ...

... and one for evening journeys, diverted via Worrygoose Lane.

Apart from the loop via Worrygoose Lane, the 29 and the 29a follow the same route ... 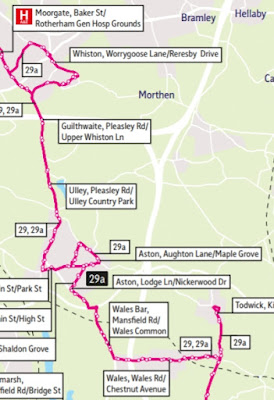 ... which is why there are a different set of time points depending on which operator's timetable the PTE have sucked in to their confuser (proper use of word!) system!
Why Do They Do This?
But there's more! What about the silliness on Sundays at Todwick?

Tough cheese if you want to get from Rotherham to Todwick on the Sabbath. This is only possible on the first journey of the day and the last, acccording to the PTE.
Hyper twaddle. All those journeys showing a blank at Todwick do serve Todwick. You see, expert fbb knows the secret!
29a buses become X54s at Harthill and then they run via Todwick. And there they are, setting off Todwick-wards after a short break of one minute.

But the PTE keeps this a closely guarded secret, just in case passengers might consider making the journey.
T M Travel don't want you to go to Todwick either.

And so Traveline gives you duff information and makes you walk unnecessarily. 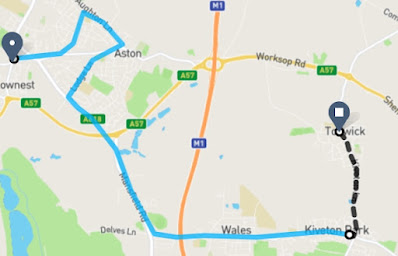 It is just plain daft
From Main Street, Swallownest,
take 29a bus to Station Road, Kiveton Park
18 minutes. Depart 09:47, Arrive 10:05
Walk to Todwick, South Yorkshire
23 minutes. Depart 10:05, Arrive 10:28
Traveline cannot cope with the 1 minute "connection" at Harthill, even if it knew what was happening - but it doesn't because nobody joins the two services together.
Why Do They Do This? 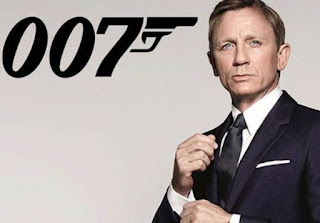 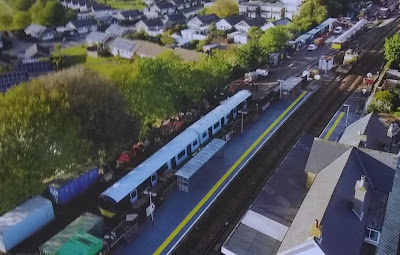 Unit 007 sits top right waiting to be moved by road to the HQ of the Isle of Wight Steam Railway. Below, one of the two cars being prepared for shunting into the exhibition hall ... 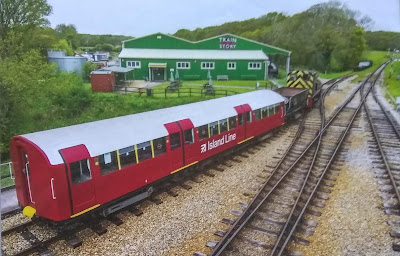 ... and the unit sitting prettily and awaiting visitors.

In due course the plan is to operate the unit between Smallbrook Junction and Wootton. Options include battery or a generator car, but the most likely is haulage by the railway's diesel shunter.

Whatever method is used, it will be good to have a ride even if the line was never slated for electrification.

But might it be? The campaign for running a "proper" train service to Newport continues to bubble up every so often. It seems to be bubbling again! 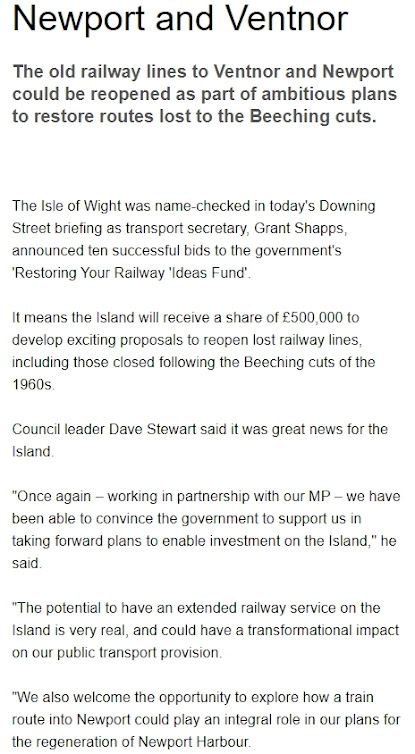 Next Variety blog : Saturday 28th August
Posted by fatbusbloke at 02:00