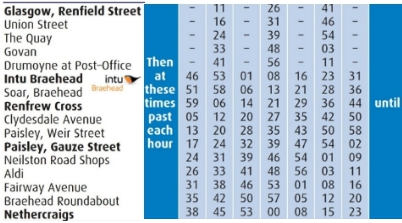 ... inheriting some of the historic frequency of buses between Paisley and Renfrew Ferry. 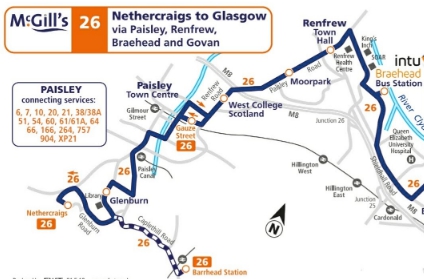 The time point in Paisley is Gauze Street, one of the main town centre roads. But where on Gauze Street?

There are three stops and shelters on the northern side of the street ... 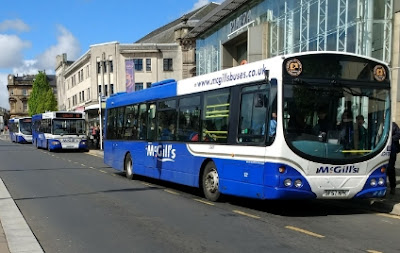 ... with the two nearest the camera being outside the Piazza shopping centre.

On the other side of the road there is also a run of three stops and shelters with the leftmost being outside the Town Hall. 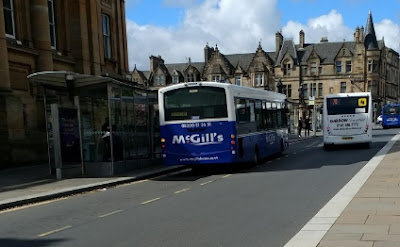 A little further away and again on the south side is another Gauze Street stop right outside Paisley Abbey. 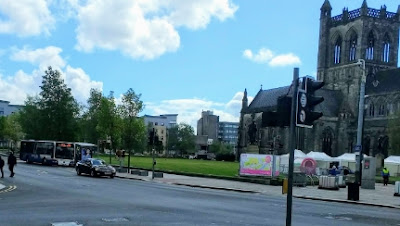 They are shown on Google Maps as the usual little blue blobs. (click on the graphic below to enlarge it)

fbb did not have time for a full survey, but generally ALL these stops are called Gauze Street in the company's timetables (although service 38 shows a less than helpful "Town Centre").

According to Google Maps the "official" (?) names of the stops are as follows (reading from left to right):-

Gilmour Street, Smithills Street, St Mirren Street and Abbey Close are side turnings off Gauze Street and a bit of High Street.

Paisley Town Hall (North Side) is opposite the town hall and outside the Piazza.

The Piazza stop (South Side) is opposite the Piazza and almost outside Paisley Town Hall. 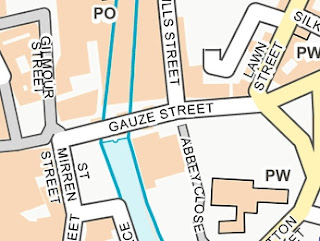 There are stops on Smithills Street itself (to the right of "PO") called Gauze Street And stops on St Mirren Street called Dunn Square and Forbes Place.

The 26 dropped fbb at the Paisley Town Hall stop and he had only to cross the road for his next bus. 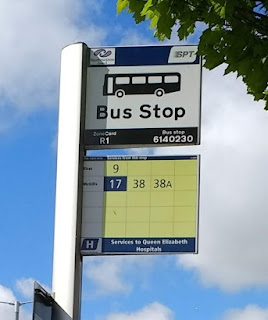 The stop was shared with the 9 (First Bus) and the 38 (McGills) which are in direct competition along the main Glasgow to Paisley Road. 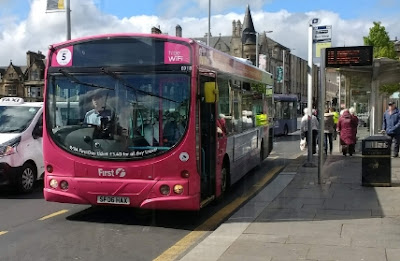 The 9 is every ten minutes from Paisley centre. joined by a further ten minute frequency from the Hospital (of which more later). The 36 is actually two routes (every twenty) from different parts of Johnstone ... 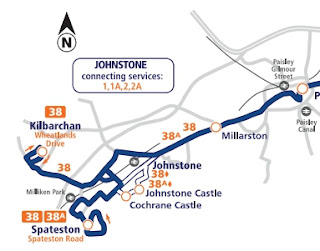 ... plus another ten minute headway from Paisley centre - a bus every 5 minutes to and from Glasgow!

Too many? Of course it is. Neither operator will be making any money and most buses carry only a few passengers off-peak. There is a bit of a self destructive fares battle as well.

Amusingly 38s run to Glasgow whereas 9s end up at City Centre ...

... such are the co-ordinated benefits of electronic information delivery.

But fbb eschewed the main drag (it is somewhat tedious) and decided on the 17. 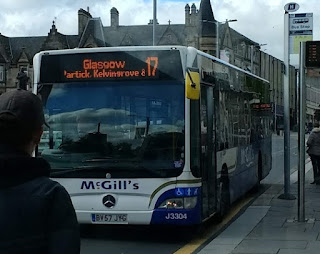 This turns off the main thoroughfare at Berryknowes Road ... 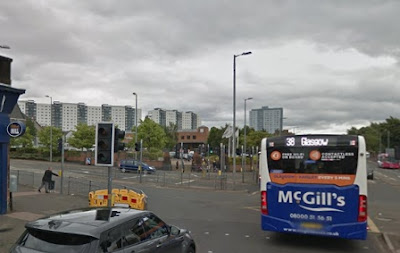 ... and begins a series of wiggles to find its way to the Queens Elizabeth (formerly Southern General) hospital. 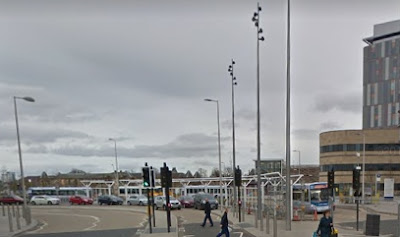 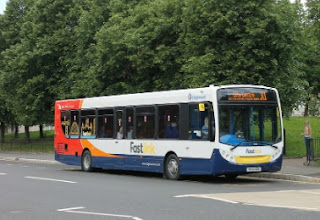 ... dubbed "Farce" because it uses expensive bus lanes and traffic light priority schemes to take longer to get into the city than buses using the ordinary road system! But fbb is on the 17 via the Clyde Tunnel ... 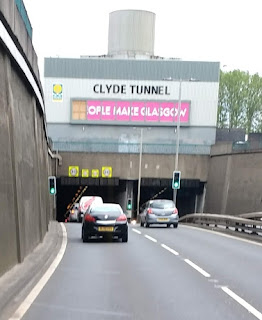 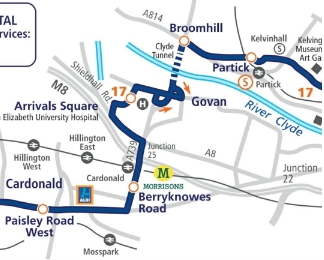 But where next? Various options were originally planned, but your noble author's inflamed plantar fascia was proving troublesome so a reduced schedule was adopted.

This would be a train trip to Paisley. "copping" a bit of line "new" to fbb. More later.

But sadly the old man must have just missed an interesting "passenger" on a McGills bus in Paisley. 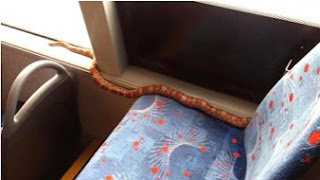 It was an orange snake, nicely matching the coloured blobs on the seat moquette.

Here is the full story.

A “fare-dodging” snake had to be removed from a bus after alarming passengers. The pet is said to have escaped from a passenger’s bag on Friday. (26th April).

McGill’s said on Facebook: “Our Inspector Mick removing a fare dodging ‘passenger’ from a bus in Paisley yesterday. Now safely back with its owner but we hope it ‘adder’ good time.” 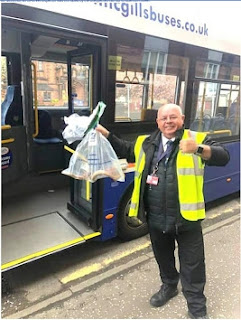 Bus inspector Mick McArthur was pictured with the pet, believed to be a corn snake, safely in a bag.

The creature was reunited with its owner after a phone call to lost property.

Ralph Roberts, McGill’s managing director, told the BBC News website: “Mick took one look at it and said he thought it was just a corn snake. He lifted it up and kept it safe before it could upset any of the passengers.”

That gives fbb an idea for a film ... 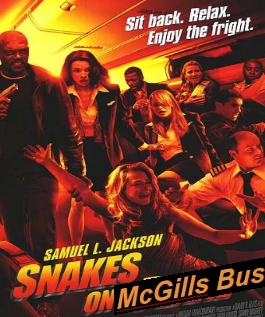 All the McGills staff that fbb encountered were friendly and ready to help. The buses were well kept, clean and tidy and the day anywhere ticket (at £7.10) seemed exceptionally good value for a wide and busy network.

The quality of printed publicity was excellent but its availability was poor. As ever, the devil is in the details and fbb will return soon to look more closely at some of the challenges presented by some (but by no means all) of their leaflet's presentation.

Next railway ride blog : Wednesday 1st  May
Posted by fatbusbloke at 02:00