If you were to look for Lubbesthorpe on a map today, you would be unlikely to find it. Yet on older OS maps it was given a full sized "parish" name and font. 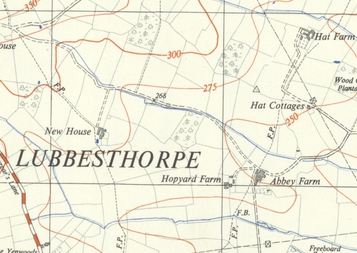 Look for the settlement on Google Earth and the little proddy icon ... 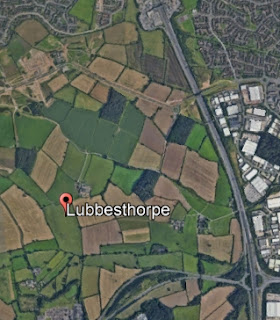 ... points to a field. But fbb can reveal where Lubbesthorpe was when the Domesday Book was compiled. 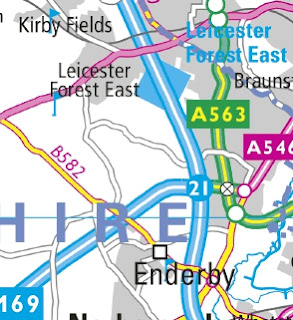 Just north of Junction 21 and on the "white" road (above, yellow below) that crosses under the M1 ... 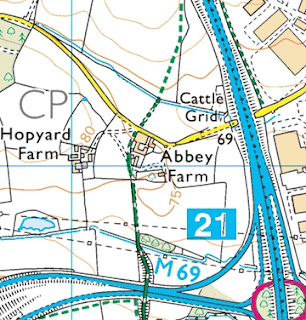 ... is Abbey Farm. Lubbbesthorpe used to have a small "Abbey" and a Manor House both of which were disused by the 1820s! But around Abbey Farm ... 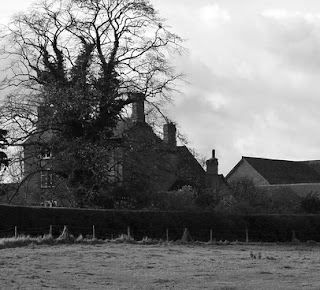 ... was the mediaeval settlement which became the almost disappeared Lubbesthorpe. Google Maps shops a large area surrounded by a red border. 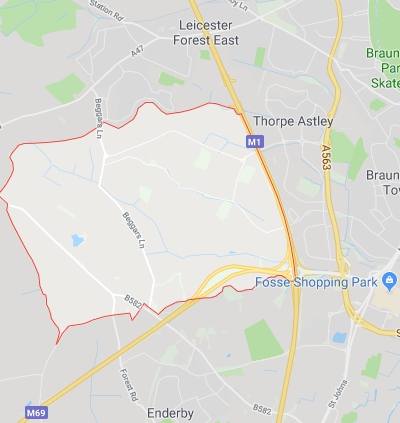 The area between Beggars Lane (running roughly north-south) and the M1 is being developed as ... 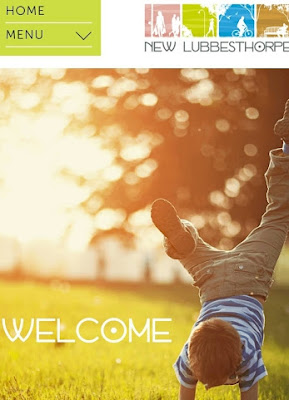 ... New Lubbesthorpe where, apparently you will be so excited that you will perform a handstand.

Major landowners and (former) farmers, the Drummond Family, are the "eminences grises" behind a development of approximately 4,250 homes plus schools, shops and all the paraphernalia of modern living. 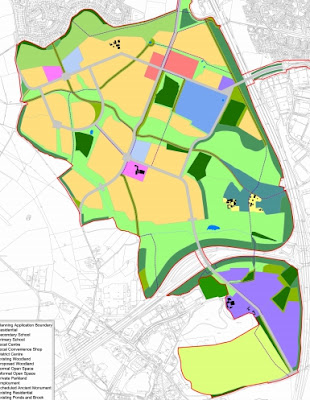 A new bridge has been built across the M1 (upper right) ... 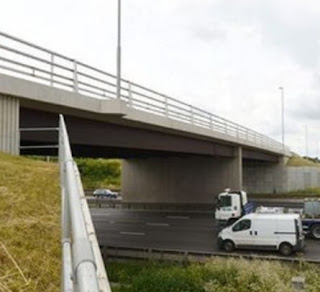 ... which leads to a brand new Tay Road, blasted through farmland, to provide the spine for the first phase of the development. 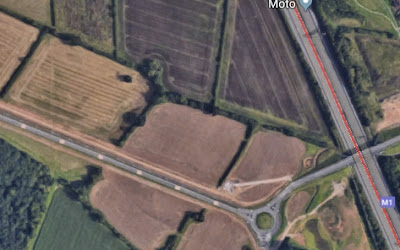 Even Google Maps, not renowned for being up-to-date, shows the beginning of the housing on the north west of the designated area ... 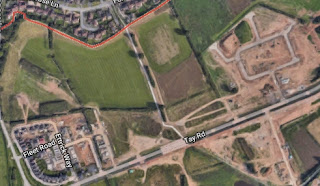 ... whilst builders are busily advertising their wares complete with rustic sounding names!" 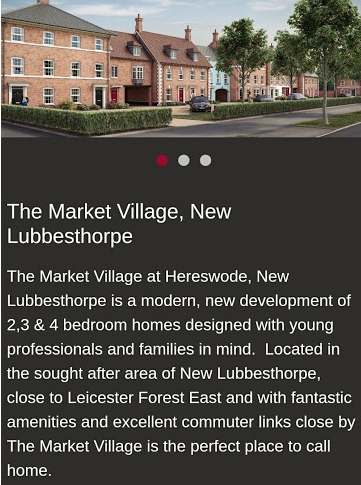 After settling in to our Georgian-style pad, we can nip down to the market and stock up with goodies harvested in the fields beyond. In your dreams!

"What about public transport?", we hear our loyal reader cry.

In their sales blurb, the developers have explained that there will be a 20 minute frequency bus service - but there is no clue as to when this might arrive.

But in something of a novelty for the industry, Arriva, boosted by a bag of  "section 106" pennies from the developers  will be starting a bus a service at the end of this month. (Hooray!)

It will be an Arriva Click service. (Possibly boo!)

Just a video reminder of what an Arriva Click service is :-
Currently the company runs its clicky minibuses in Sittingbourne .../ 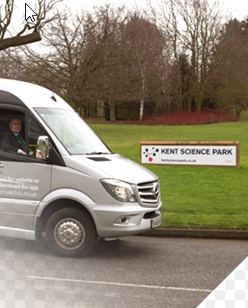 ... and for South Liverpool and the Airport. 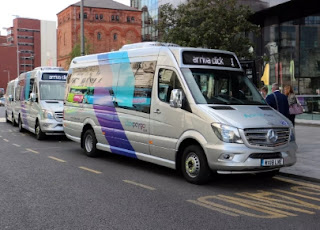 The latter is the newer of the two. 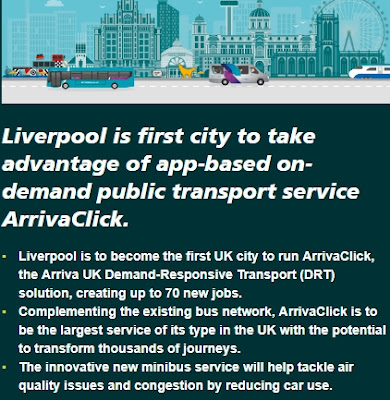 So the residents of New Lubbesthorpe will be able to benefit (?) from this style of public transport. 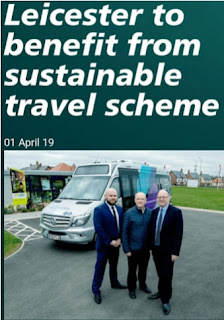 It all seems jolly and fine - but at what cost? 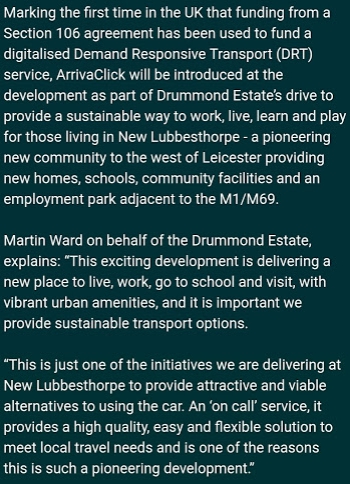 The usual financial pattern for such services is that, after a "cheap-ish" launch offer, the fares lie between taxi and proper bus.

The unanswered question, however, is, will registering, clicking and booking be too much of a palaver compared with getting on a bus when the timetable announces it, paying or tapping, and just riding without technology?

Would the "section 106" money be better spent on extending one of Leicester's nearby "traditional" bus routes? Possibly not. At present the choice is to walk to Thorpe Astley for a very circuitous 104 into the city ... 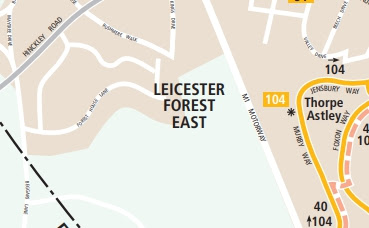 ... or, more usefully, a jog up to the Hinkley Road for something more direct.

Will Arriva Click tempt people out of their cars, because New Lubbesthorpe has every indication of becoming a car owning (two-car owning?) development. 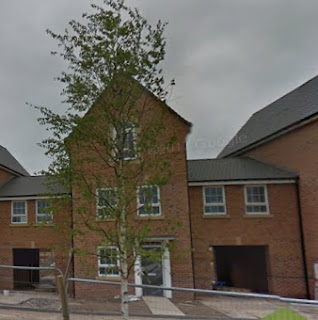 These Streetview pictures are out-of-date, of course; but that sales office ... 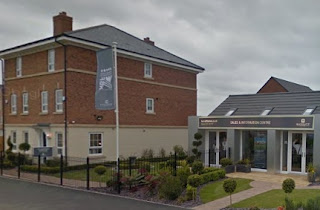 ... looks suspiciously like a double garage with a cardboard front tacked on.

fbb will tactfully ask his Leicester correspondent to have a look at "Click" in a few week's time.

Next bits and bobs blog : Saturday 6th April
Posted by fatbusbloke at 02:00