On April 1st, fbb has, traditionally, published a reasonably obvious "Fool" article. Today is a little different. There follows a selection of "news" items and our loyal readers are invited to work out which of them might be factually correct and which of them are appropriate for today's date. No prizes are on offer, but readers should aim to identify wrong from right using their own knowledge and intuition. Reference to search engines is regarded as "a poor show". 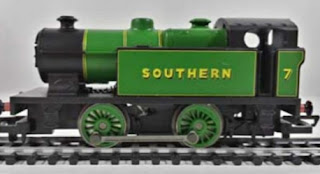 ... ran for real near Merthyr Tydfil - but not in those colours.

Twins In A Can
This beastie is, in effect, two 0-6-0 steam locomotives in a tin box. 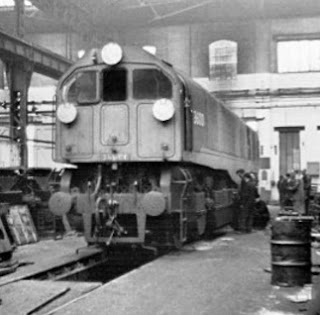 It was designed by this man. 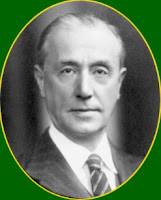 He was born in Invercargill, New Zealand. 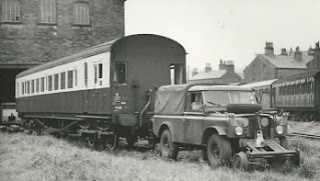 Extra braking power was located behind the driver in the "Wpick-up" part of the vehicle..

A Practical Electric Car
When Sir Clive Sinclair was developing his C5 ... 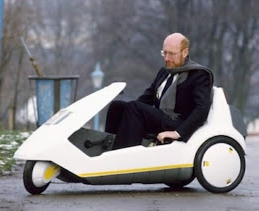 ... he drove one round the North Circular Road accompanied by a fairground generator truck to recharge the car. 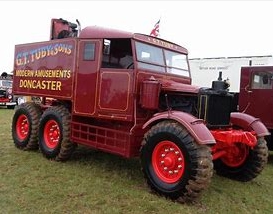 This unpublicised publicity stunt was, like the car, not a great success and was abandoned after using six separate cars to travel 15 miles! His computers were more successful, notably because a youthful fbb owned a ZX81 - a wonder of the age ... 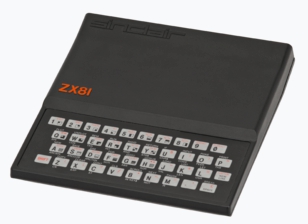 Spider In The Rain
Magnus Volk's so-called "daddy Long Legs" which ran from Brighton through the sea to Rottingdean ... 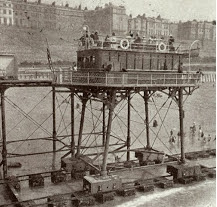 ... was very successful commercially but was repeatedly damaged by rough seas and high winds and proved too expensive to repair every few months (a bit like fbb's model railway?) 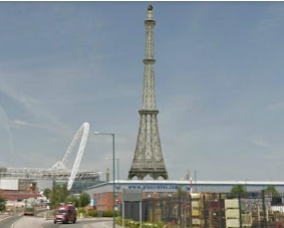 The proposal to build a tower taller than Eiffel's was set in motion by the same man who started building the Channel Tunnel. Only the first section of the tower was ever built and opened as a tourist attraction at Wembley. 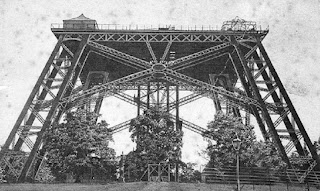 It was demolished after it started sinking!

Eiffel's birth surname was Bönickhausen. Had the family not changed their name, millions would be visiting the Bönickhausen Tower in Paris today!

Yesterday was the 130th anniversary of the opening of Gustave's more stable Parisian edifice. 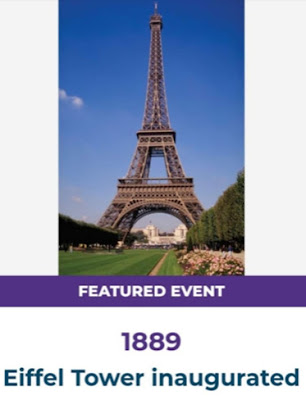 Wightlink Sinks?
Two recent proposals have been made by supposedly serious contenders to link the Isle of Wight with the mainland by bridge ... 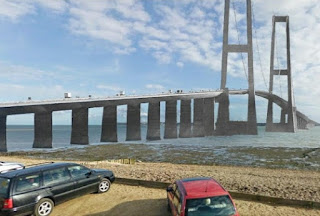 ... and by motorway tunnel.

It came as something of a surprise to Vectensians that, to pay for either, the tolls would have to about the same as the cost of using the car ferry! 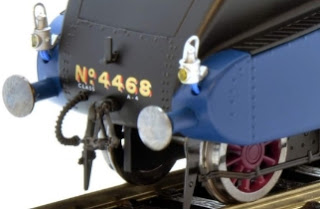 ... a wide selection of sound effects, reak coal in the tender, driver & fireman, "fire" in the firebox, smoke from the chimney, steam from the whistle etc etc. 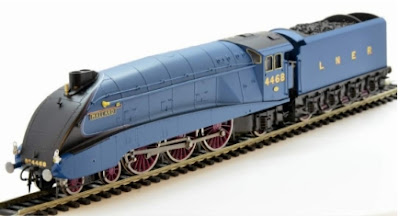 No more "Black Label" models have appeared since.

Branson's Brave Bonanza?
The publicity-seeking Sir Richard has set a few cats among lots of pigeons in his time. This proposal is (a) potentially ridiculous but (b) might just work. 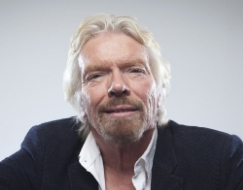 He wants to take over the whole HS2 project from the government (including the government's money!) and add a shilling or two of his own, replacing conventional trains with high speed Maglev stock and track. 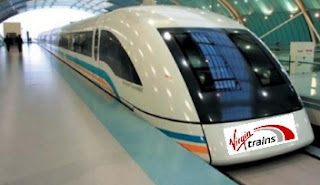 Currently operating on part of the Shanghai rail network, simuilar trains run at 268mph, suspended on a magnetic field. There are no overhead wires which should suit the environmentalists.

The Shanghai train line connects Shanghai Pudong International Airport and Longyang Road Station (in the outskirts of central Pudong), where passengers can interchange to the Shanghai Metro to continue their trip to the city center.  The line's balance of payments has been in huge deficit since its opening.

Sir Richard has suggested that it be branded M&Ms (for Manchester and Maglev). 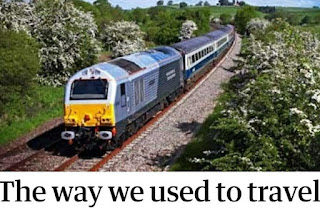 Add in a restaurant service available to all, not just First Class passengers, consisting of prepared-on-board meals. 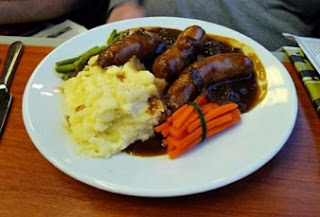 Add in exceptionally friendly staff offering a true personal service and it seemed an ideal development.

Just Imagine ...
An aircraft with a huge helicopter rotor; powered, not by complicated gearing, but by little jet engines at the end of the blades.

Then once the copter had risen into the sky, the pilot switches off said engines ....

... and transfers power to normal propellers, but on ridiculously short wings which would never hold the plane in the sky. 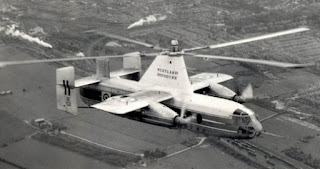 It must have seemed a good idea because Airfix sold a kit version. 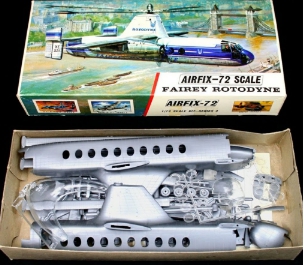 It must also have been "right" because a 13 (?) year old fbb watched it fly past his very eyes at the Farnborough air show. 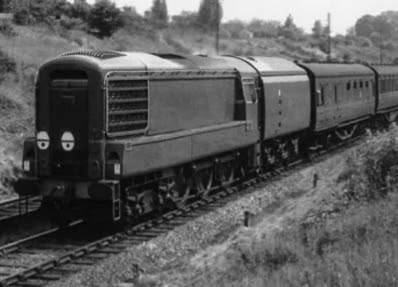 The designers deliberately used traditional steam loco transmission in 4-6-0 form "to avoid too much new technology" and cleverly made the whole thing look a bit like a streamlined steam engine. 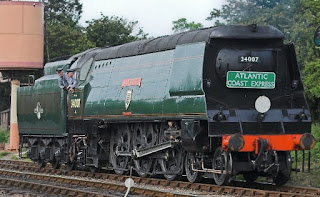 GT3 was torched in 1966 and all its technical drawings were destroyed. But a brave group of enthusiasts is seeking to build a replacement. "We, too, can use steam engine transmission; there are plenty of bits lying around."

The new-build will not be gas turbine, but a conventional diesel, all hidden in the spam-can type of body.

In the meantime you might like to join a crowd funding plan to produce an OO gauge model of GT3. 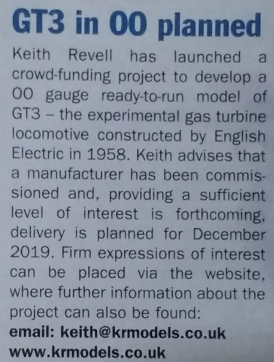 And Finally ...
This must, surely, be an April Fool scam. Here is a map from the First Bus web site for Sheffield. 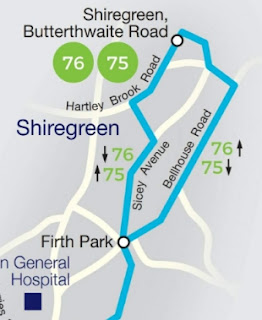 And, chortle chortle, it shows the 75 and 76 both going the wrong way round the Shiregreen estate loop.

Let's hope Sheffield folk enjoy the joke as they watch their chosen bus zoom past on the opposite side of the road from their chosen waiting place.

Oh, it's not a scam; it's just that First bus don't actually know which way their buses go.