Thanks to fbb's correspondents, fbb can report that the ex GoAhead Chippy Bus DID serve Denby Dale and was featured in the local rag, The Huddersfield Examiner, some time ago. 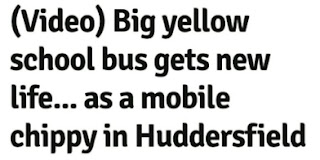 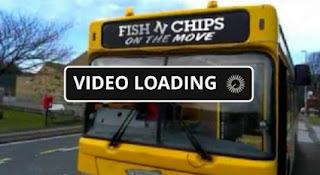 Using the same journalistic skill that announces every red bus as being from London, it would appear that every yellow bus is a school bus! It isn't and this one wasn't (see yesterday's blOg).

The "video" purports to show the inside of the bus as converted - but the video isn't there. One correspondent (to the web site, not to this blog) reports that the bus has gone and the chips are served from "just a van". Correspondent Roy tells us that the bus now languishes in a Barnsley scrapyard. 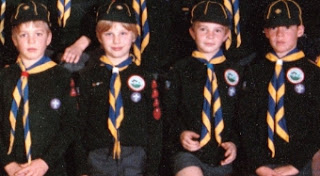 fbb attended cubs at Weston Favell Church Hall, but, fortunately, no pictures exist of that part of the old man's life. The hall has gone all posh! 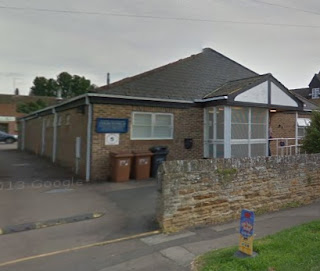 But it was a search for Yorkshire Tiger's cubs ... 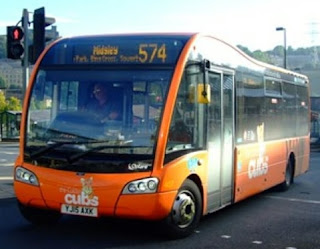 ... that brought some fondly rememberED adverts frem the bowels of the interwebnet.

The Leyland Tiger Cub was marketed as a low cost low maintenance bus ... 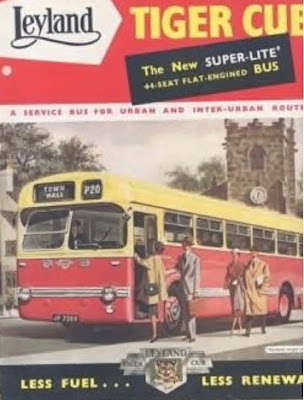 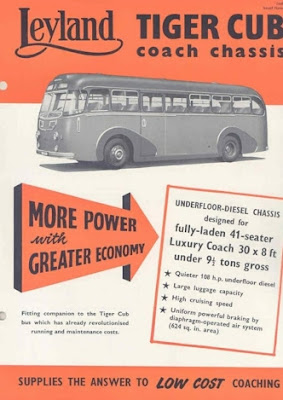 Of course, that was the chassis. Operators would also need to choose a bodywork supplier. This coach ... 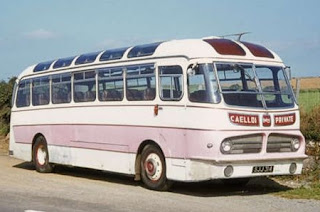 ... from Caelloi of Pwllheli, looks a bit weird. The company is still trading and advertises itself ... 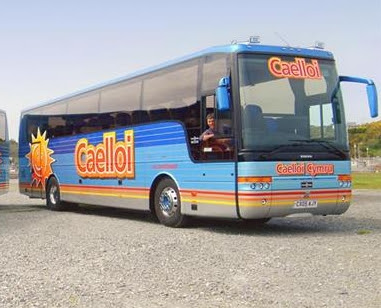 ... as the oldest coach and bus company continuously trading in the UK. It claims a history dating back to 1851!!

The founder, Tomos Huws, was given a donkey by a local farmer when bad health compelled him to give up his low-paid farm job. The object of the donkey was to set him up in business as a carrier and carriers were very much in demand in that era.

The trouble was that Tomos could not afford a cart. However, a kindly farmer gave him two wheels, and Tomos completed the project by nailing a few planks of wood and fixing a pair of shafts. That was how Caelloi started to serve the Lleyn Peninsula and North Wales.

The business was eventually taken over by Mr Huws daughter and her husband Thomas Jones. It was their son Thomas, better known to the people of Lleyn as Tomi Caelloi, who persuaded his parents to invest in a motor lorry, which was converted into a bus by means of a tarpaulin over the top, and the run from the home base in Dinas to Pwllheli became motorised. 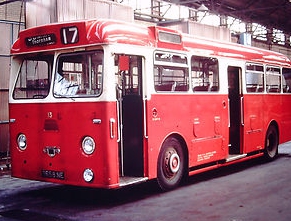 fbb well remembers riding around the coalfields of South Yorkshire in vehicles belonging to Yorkshire Traction. The seats were packed in, there was minimal legroom and journeys were often fun but uncomfortable.

Ghastly at Guildford
This is what Guildford railway station looked like in days gone by - sweet. 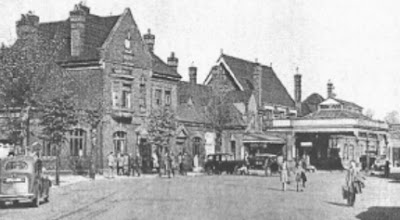 Frankly, it was not an improvement; the entrance area is too small and cluttered and the "retail facilities" are poor. The platforms used to look like this ... 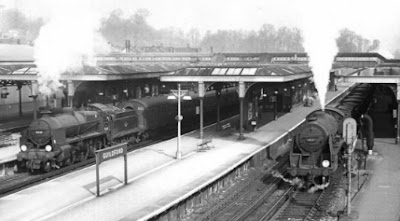 ... and have been rebuilt reasonably attractively. 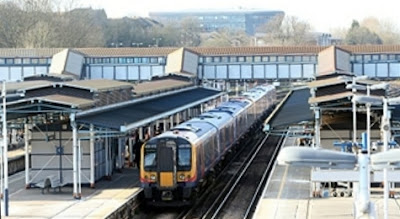 But a company called "Solum" wanted the station buildings to look like this. 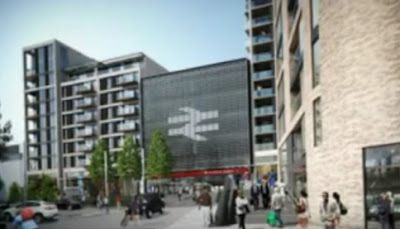 The Council refused permission so the company produced a "scaled down" version. 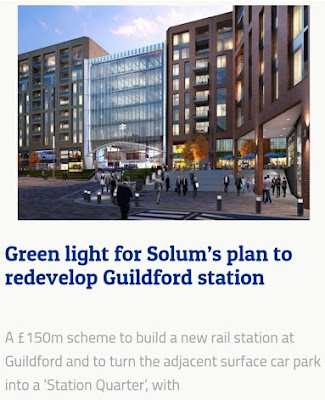 It doesn't look much different to fbb, but again the council, on behalf of the people who christened it "The Great Wall of Guildford", refused.

Solum appealed and, much to the disgust of almost everyone in the town except Solum, the refusal was refused and the development can go ahead. 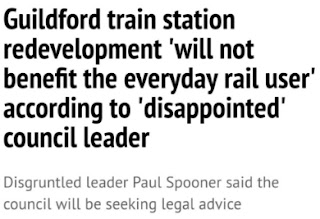 So much for the Government Policy of delegating stuff to the local people.

Compliments for Classical Cambridge
Here, on the other hand, the station remains much the same. 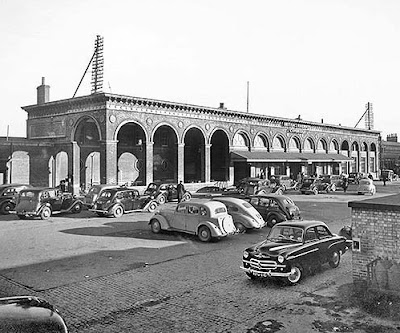 In fact all those arches used to be open. 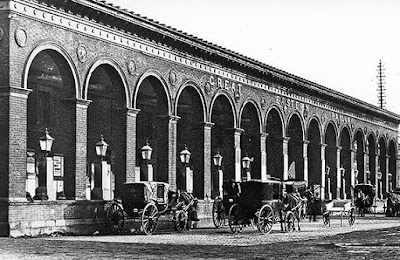 The remaining open section at the near end had been filled in and the ugly canopy removed, leaving a clean and tidy building retaining much of its classical character.

Pity about the bicycle clutter!

Now we read that Anglia Railway has won an award for their efforts to fettle up the decorative bosses above each arch. 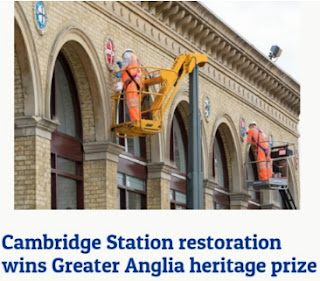 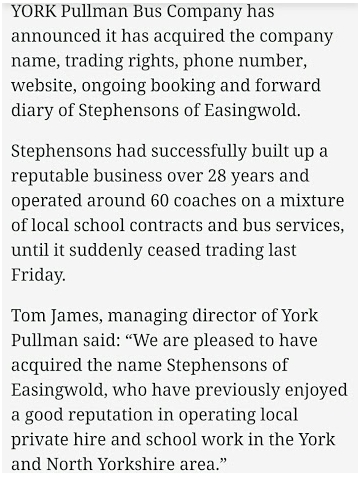 "Buying the Book" is coach industry shorthand for what is reported above. York Pullman has purchased the company name, visible presence of Stephensons on-line plus and details of future bookings for coach hire. It has not, apparently, bought any tangible assets.

It is therefore likely hat the Stephensons name will continue as a brand of York Pullman.

And finally, an apology.
Things have been a bit hairy for a day or so c/o fbb. One of his church leaders has suffered a series of minor strokes and there will be quite a lot to sort out and much to exercise the mind, including a greater urgency to prepare services and other talks. The promised Lincoln blog should appear tomorrow but the research and planning needed was a step too far for today's posting. All at the church are praying for Bill's recovery and for some peace of mind for his wife Helen.

Thank you all for your patience.