All Good Things come in Threes ... 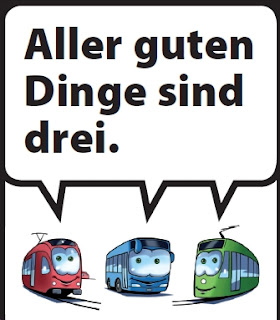 We have, over the past few days, taken a look at the complexities of public transport in three nations which impinge on each other near Nuningue. We have seen that each country has its own co-ordinated fares system to ensure that passenger interoperability is straightforward. If you are, seremdipitously, coming unawares on this blog, you may wish to do some revision.


Or perhaps you won't!

But wrapped over the whole joyous combination is an umbrella for the umbrellas. 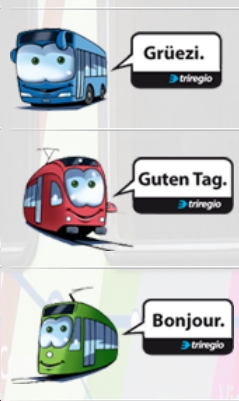 fbb can do multi-lingual - a bit! So, to benefit the whole "bassin de vie" (basin of life = catchment area), to facilitate "emplois" (employment), "shopping" (wonder what that is in English?), "culturelle diversifée" (guess) and "villégiature" (holiday residence), Trireggio provides cross border ticket facilities.

And there are loads of varieties in the coordinating leaflet; 13 pages of them; starting with a day rover for the whole area plus trains to Mulhouse. 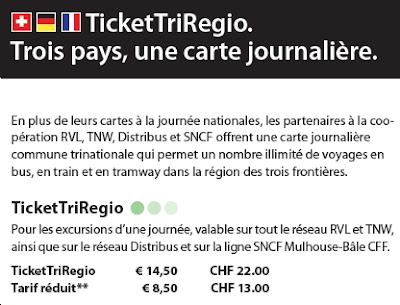 There's plenty of map to explore ... 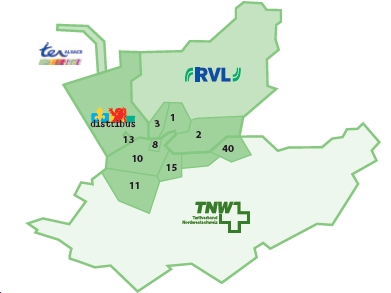 ... and a ticket at roughly half the above prices is available for th numbered zones which might be described as "Greater" Basel.

Next there is a "Two countries" Monthly for Germany and Switzerland ... 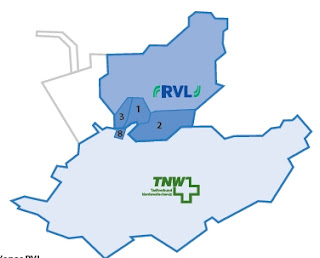 ... again with cheaper fares for Lörrach area and Basel city.

But you do need your wits about you to choose the best deal!

Some of the ramifications are not straightforward, but, considering the politics, geography, currency and public transport policies of the three nations, the deals are good value and helpful.

Of course, there is simply no equivalent to this border alignment in the UK. Things might get a bit more exciting if young Nicola has her way. But consider the problems that exist even in the greater London area. fbb has before published a list of fares from the capital to Watford, a list that is horrific in the extreme.

But consider the ramifications of through travel from, say, Harrow and Wealdstone (London) to St Albans (Herfordshire) allowing the flexibility of train and bus for a day; for a month. The two are just over 14 miles apart.

Pay as you go

Simply top up your Oyster with credit, touch in at the start and out at the end of your journeys, and the cost will be debited from your balance, based on where and what time you touch in, and in some cases, which route you take.

Off peak single fares will apply at all other times, and on Public Holidays.

Pay as you go is not valid on Heathrow Express, Heathrow Connect services between Hayes & Harlington and Heathrow or on Southeastern high speed services to/from London St Pancras International.

Or take a retrospective look at a blog entitled "Commuters Rejoice ..." (read again) but beware, the various links to fares lists no longer work.

And that is just one political area (London) plus a little bit (Watford) both in the same country and with one currency; and you haven't even begun to fathom the bit from Watford to St Albans. 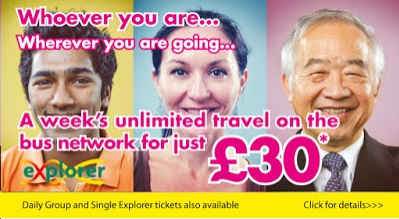 Hertforshire : Bus but NOT Rail

Our Northampton correspondent has just returned from a holiday in Belgium (he travelled all the way from from St Pancras to Waterloo!) and he writes on his return, "I have just set my watch back one hour and my public transport experience back 50 years!"

One area not covered by fbb is rail travel in the greater Basel area. But that must wait for a later date. Appropriate local trains, are, of couse, all included in the Trireggio tickets.

Of course, there is one over-riding difference between transport in the UK and than in the Trireggio (three nations) area. Here, in dear old blighty, we pretend that our trains are privatised and run commercially. They are neither. We are politically proud that buses and trams (and even a few trolley buses, maybe one day) are engaged in competition to benefit the consumer. Most are not. Government is proud that subsidies are thus greatly reduced. They are not - they are just more cunningly hidden.

In France, Germany and Switzerland, public transport still has a substantial public service ethic and is mostly run by Governments or their not-very-well-disguised agencies. Subsidy levels are high, fares are low and it is easy to coordinate and publicise. But you still pay through higher taxes.

Which system is best? Answers on a postcard please.

And, even more galling, many of these Governments or their not-very-well-disguised agencies are now running buses, trains and trams and, presumably, hauling sacks of profit back to France and Germany; but not Switzerland - yet!

As the Trireggio leaflet says ... 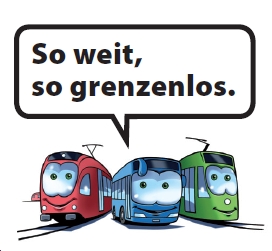 Now there's a thought** for the UK! 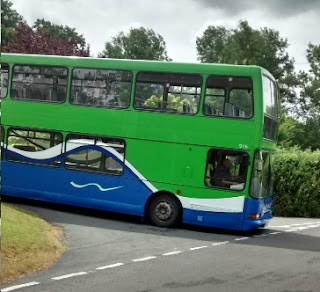