On arriving by train at York Station a visitor might well be impressed with a computer monitor display at the main exit from the station.   It looks both helpful and "with it" with a clear heading "buses leaving from outside this station" accompanied by the coat of arms of York City Council.   The display below is a reconstruction of that observed by fat bus bloke on Wednesday 16th June from 1030 onwards. 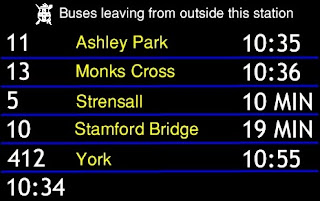 It purports to show departures for the next 30 to 40 minutes, approximately.   Initially a visitor might be slightly bewildered by the service 412 to "York" due at 1055.   After all, our confused visitor has just arrived at York on a train!   Maybe, he thinks, this bus might take him into the centre of the City - and he would be right!   But so would many other buses from "outside this station"

Maybe our visitor might want to get to the University and has been told to catch service 4 from "outside this station", so he patiently waits for the time of the next service 4 to appear on the screen.   And waits.   And waits.   Has service 4 been withdrawn?   Are the bus drivers on strike?   Have all the service 4 buses fallen into a hole in the road?  Has his informant deliberately misled him as part of some hilarious practical joke?
No!   Service 4 never appears on the board, despite the fact that it is the high-tech "ftr" service with sexy purple articulated buses (with "customer care officers" i.e. conductors!) - and fitted with the latest GPS driven "next stop" announcements. 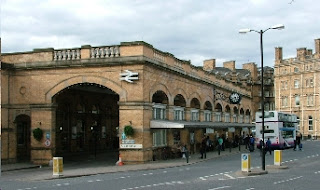 If our inncoent traveller were to step outside the station he would, very soon, spot his service 4, together with services 1, 2, 3, 12, 42, 142, 143, 744, 746, 747, 840, 843, 844, 845, X40, X43, X46, X52, X53, X54, X64 and some I've missed, and even more that leave from Station Avenue a minute's walk away.  None of these appear on the board!
What the board SHOULD say is that it shows a very small and arbitrary selection of services travelling north from the stops "outside this station" - presumably those very few services which are set up to drive this particular electronic system.  Another different display at a stand outside the station shows details of services 3 and 4; but, when the sun shines, you can't read what is on the screen.   Never mind, it does give a five day weather forecast in case you have to wait that long for your bus.
On the opposite side of the road a third display screen (different again - small and dot matrix) shows the 3 and 4 travelling southbound.  Times appear and buses arrive and depart but the two sets of events (electronic and reality) bear no relationship to each other.   Mysteriously when fat bus bloke was there, this particular screen also advertised a 1005 service 37 to Tadcaster (see P.S. below) but between 1000 and 1040 no such beast appeared!   It probably does not exist but there is no way of checking as York City does not publish any timetable information and neither does the infamous Traveline in the York area!
Finally, to add to this impressive and co-ordinated technology (?) to inform people of an arbitrary (and, frankly, totally useless) selection of information, You can go back INTO the station and find that times of BUSES to Whitby (Coastliner service 840) are shown on the dot matrix station departure screens.
York Information : ID : ten : TIC?
York Information : ID : 10 : TIC?
York Information : IDIOTIC!
P.S. : Subsequent to publishing the main part of this blog, fbb has discovered service 37.  The serendipitous revelation came when searching the word wide web for the activities of the York Pullman bus company (incidentally with the smartest and shiniest vehicles ever seen!).   The 37 WAS the 87 and it runs the "back way" to Tadcaster.   The first departure from York Station is 1205 - so the 1005 referred to above does NOT exist - as predicted.
DEEP JOY!