Well, actually not from Alcatraz; but from the Isle of Wight.


An unfortunate combination of events meant that fat bus bloke was scheduled to leave the Isle of Wight on the same day as 60,000 pop festival attendees (14th June). So the solution was to book with Greyhound UK, as this, hopefully, would guarantee a seat and the company offered a good all-in deal via Island bus, hovercraft and coach - namely from £8 single IoW to London. 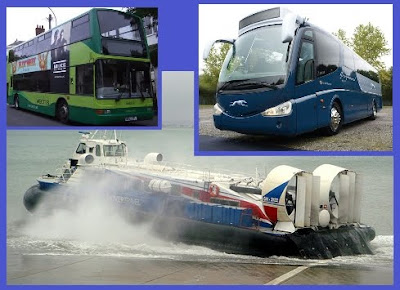 No problem booking on-line - no very cheap seats, £24 was all that was on offer - but it was festival go-home day.   The downloaded ticket stated 0715 from Ryde Hover terminal with an arrival in Victoria of 1000.   Slower than the train; but at least there would be a booked seat.   But did I have a booked seat on the Hovercraft; it wasn't clear from the voucher or Greyhound's site?

So Mrs fbb popped into Hovertravel on the previous Monday (7th June).   No, you don't have an automatic booking but just turn up for the 0715, there will be no problem.    An email to Greyhound generated an inconclusive reply, so a somewhat suspicious fat bus bloke enquired again on the previous Friday (12th June) - when the 0715 was found to be FULLY BOOKED.


Had they turned up as per the ticket they would have missed the Hovercraft, missed the coach and missed our onward train in London.    fbb did book on an extra 0700 departure from Ryde.  This blog was typed on Sunday 13th, so avid readers may like to return in about a week so check for a P.S. and whether we did actually escape as advertised!

So, apparently intergrated travel and ticket collapse yet again!   And we wonder why public transport gets a bad press.