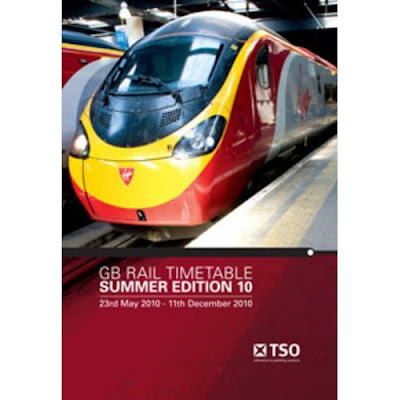 Barry Doe, a nationally renowned timetable and fares guru, issued the first warnings - which I failed to heed.   He hinted (rather strongly) that the process used for creating and printing the railway timetable had been "improved" with new software but, guess what, there were a few teething troubles.   What a surprise!

Firstly the timetable consists of over 4000 on-line pages, largely because the improved software is incapable of saying things like "and then every hour until..." which means that, for example, Table 52 for Bedford to Brighton services is a mere 166 pages long.   So, because a book with 4000 pages is unwieldy to produce we now have two on-line pages to every paper page with print that is, at best, uncomfortable to read and, at worst, often totally illegible.

Then the new improved software cannot tell me where the trains actually go.   So, where a train's times appear on several tables there are no notes to guide the user to the "other bits" of the journey.   The good old timetable used to have headings which said "though  train to...." and these helpful cross-references have all vanished.   Great!    This means, for example, that it is impossible to follow the timings for the route of Grand Central's new West Riding service - it just disappears off the face of the planet only to reappear on another table.

All this joy was heralded by Barry Doe but what he didn't tell us (because he was working from "on-line" pages) was the huge number of hyper-blunders in the retail printed edition.

A selelction for your delight:-

The hourly trains from London St Pancras  to Corby are missing.

The whole service from Cardiff to Coryton does not exist.

On Saturdays there would appear to be no trains between Brighton and London - they all terminate at Croydon.

There are many more.

This book has been published by TSO [in pre-commercial days it used to be called "The Stationery Office"] .   It is published "with the permission of Network Rail and obtained under licence from the Association of Train Operating Companies".   So thanks a bunch the whole incompetent lot of you.   You have just charged me £16 for a timetable that I can barely read, that doesn't tell me half of what I need to know and misrepresents - even simply misses out - large chunks of the information I thought I had paid for.

As Craig Revel-Horwood would say on 'Strictly Come Dancing', - "Your performance, darling, is a disa-a-a-aster!"

P.S.  Could I suggest a return to a bevy of blokes (or bloke-esses, of course) with quill pens, supervised by an editior who knows where the trains run and can spot the blunders before publication?   I am available for the editor's job!