Nobody challenged it, but when fbb published Roy's picture of a snowy Sheffield, he wrote that the buses were on their way TO the "southern heights". 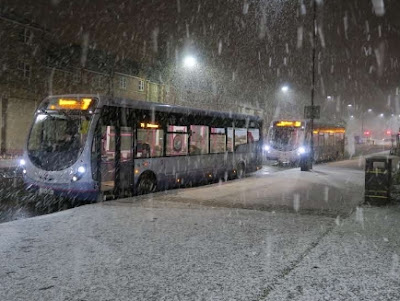 After due consideration, fbb realised that this was drivel. 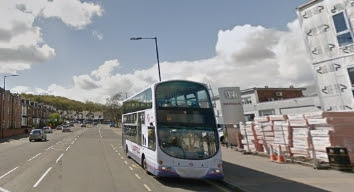 Roy was, sensibly, standing on the pavement near a rubbish bin. The Google Streeview noddy car was, equally sensibly, driving on the road. But the bus in the daytime picture is roughly where the two snow-showered single deckers are standing. The litter bin remains, and the construction of the new Woodseats Library is now complete.

Both views look southbound towards the junction of Chesterfield Road with Abbey Lane where the A61 curves left. 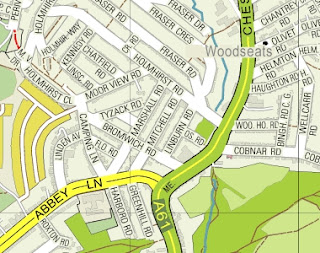 So the buses are travelling FROM the southern heights!

Where In Basel?
Another challenge from No 3 son is this nighttime shot from "somewhere" in Basel. For blogging purposes the whole shot has been reduced greatly ... 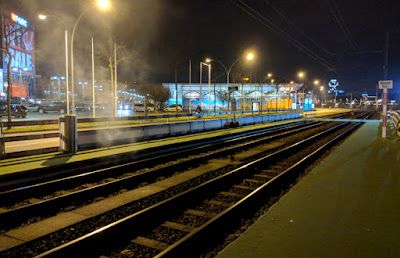 ... but thankfully, No 3's phone camera is superior to fbb's and the original is huuuuge. The first thing that catches the eye is the sign on a pole (far right). 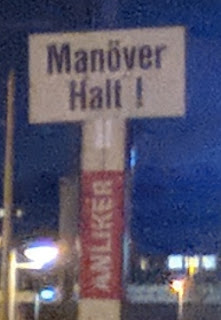 Sadly Manöver just means "manoeuvre" and Halt is hard to translate.  But what about  ANLIKER ? That would be ... 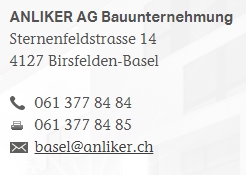 ... with "bau" as "building" and "unternehmung" meaning "undertaking"! Construction company. So, wherever these rails were (likely a tram) there is building work going on which will not appear on Streetview. There are more signs on a temporary fence near the litter bin. 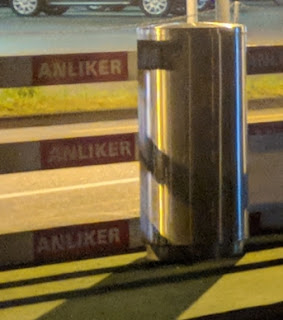 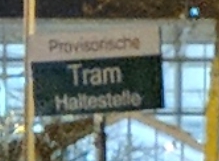 ... telling us that the Tram Haltestelle (stopping place) is "Provisorische".

But the lad has carefully made sure that there is no station name. What next? 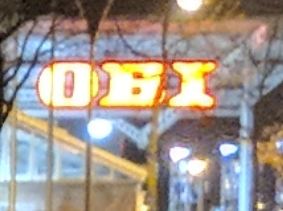 "Bau" again, plus the deliciously-sounding "Heimwerkermärkte which looks suspiciously like "Homework Market" ...

... because that's what it is; a store where you can get stuff to help you work on your home! Oddly, the web site headings are in German but most of the text is French - hence "Quincaillerie"!! The company is the German equivalent of B & Q, with 350 stores in its homeland but a paltry 10 in Schweiz. One is in Basel. 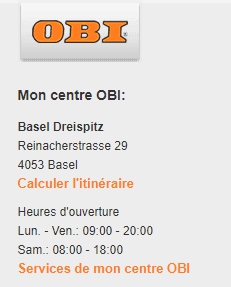 The interwebnet explains that OBI in Switzerland is in partnership with Migros and, lo and behold, there is a huge MPARC advert nearby which is, we discover, is a brand for the Migros Hypermarket. 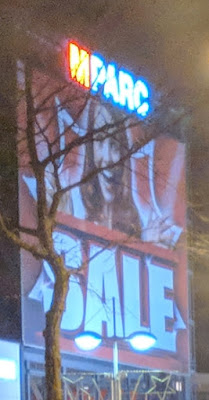 It is all plain sailing now. Off to Streetview for the above OBI address and start searching. The "strasse" is long, so try searching for MPARC - and Bingo! 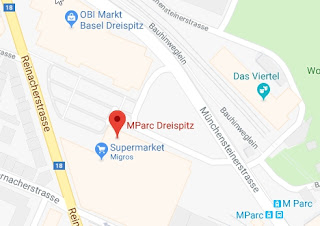 And there, bottom right on the map is a tram stop called M Parc, located on nearby Münchensteinerstrasse (Munich stone street?)** ... 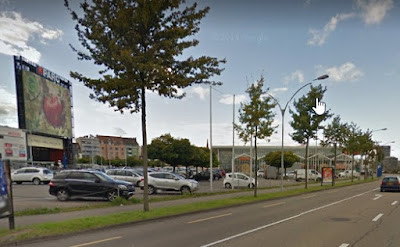 ... with OBI to the right and the huuuge MPARC poster to the left.

It does look as it No 3 son took his snap from a temporary station a little further north than that shown on Streetview. You cannot see the mega hoarding from the "real" station ... 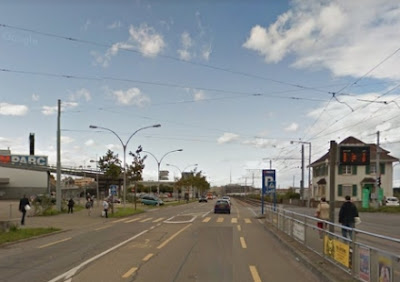 And there is MPARC tram stop cartographically on lines 10 and 11. 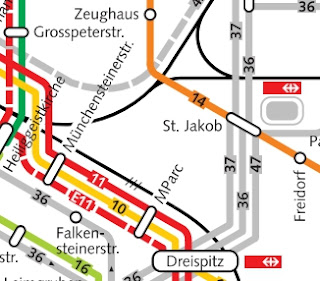 ** Just checked. Münchenstein is a district within the greater Basel area. 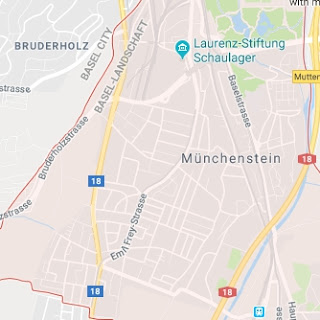 Correct. You simply get dumped out onto green covered planks of wood. Congratulations!

X52 RIP
fbb was delighted to receive a note yesterday 1330-ish from correspondent Roger. It popped onto his phone whilst the old man and his Mrs were enjoying a "light lunch" at Shauls in Sidmouth. 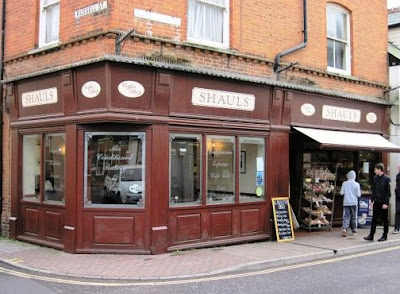 Rog was on his way on the last day of the X52 from Exeter St Davids ... 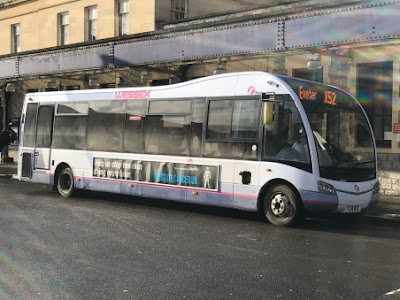 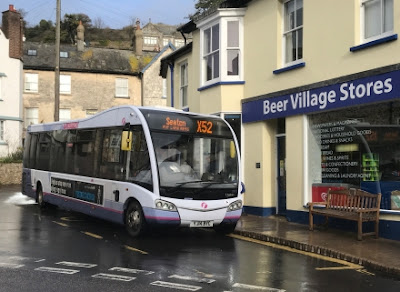 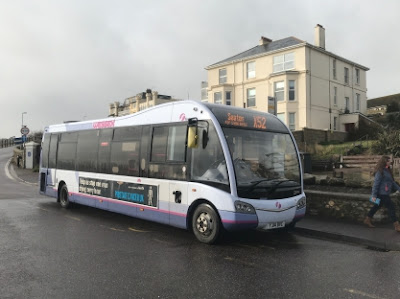 Just passing through Seaton on the penultimate journey and thought of you. 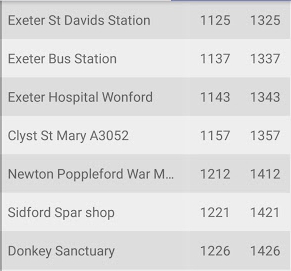 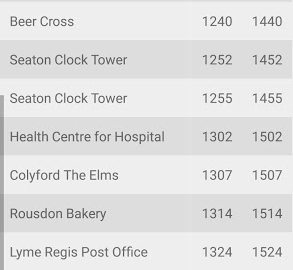 But a second email revealed our intrepid X52 rider's confusion.

Our one fare paying passenger ... 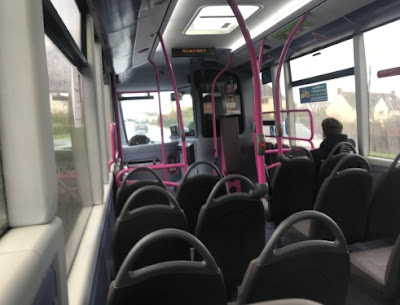 ... (there were 3 concessions at various points) boarded at Seaton and asked for and was sold a return to Lyme Regis - I did point out that the last First Bus left there 2 hours ago! 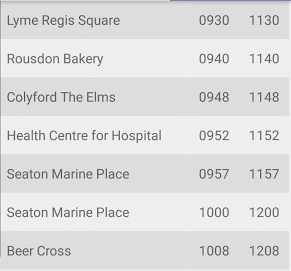 Ticket inter availability. Don't be silly. This is a bus industry focused powerfully on the paying passenger the profit margin.

When First Bus announced the withdrawal of this chunk of the former Jurassic Coaster, they blamed a lack of customers. But with no real promotion or publicity, and the withdrawal a while ago of the through route, its failure was certain.

It was a perfect example of how to ruin a potentially lucrative bus route by "masterful inactivity" sprinkled liberally with management incompetence! 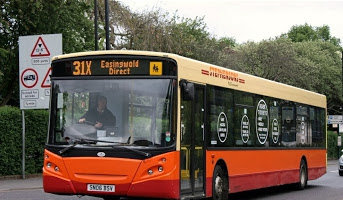 News is coming in of "happenings" involving Stephensons of Easingwold (north of York). 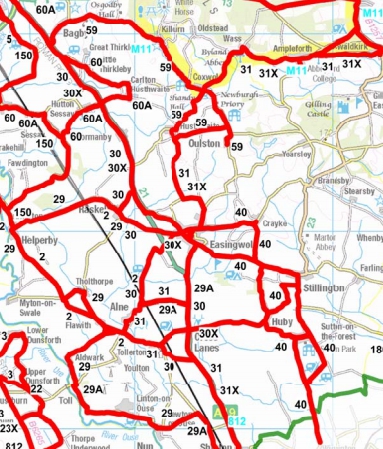 Their somewhat complicated services 29, 31 and 31X will be operated by Yorkshire Coastliner (Transdev) from tomorrow. 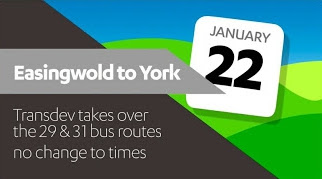 There was no on-line information about what has caused this change but it may well mean a fond farewell to yet another small independent company. This is sort of confirmed by a report on-line from Minster FM, local York Radio Station quoting Transdev as saying:-

We were approached by North Yorkshire County Council this morning who informed us that Stephensons are unable to operate from Monday. We volunteered to step in on these routes to ensure no loss of service.

As yet no news of their other public services and routes serving schools.

Next publicity blog : Monday 22nd January
Posted by fatbusbloke at 02:00