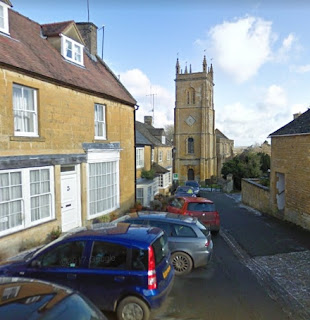 ... and THIS is St Mary's Church Kembleford, ecclesiastical home to the BBC's version of the Father Brown stories. 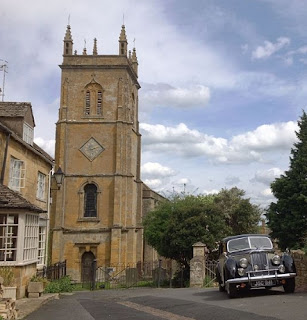 The writers or the BBC are not too well versed in church building styles. This is obviously an Anglican church with a tower, yet Father Brown, played delightfully by Mark Williams ... 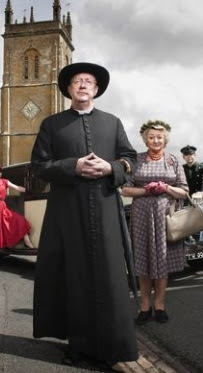 ... is most definitely a Roman Catholic cleric. The set designers had to build the confessional box inside the church! 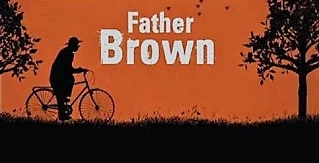 His reverence spends most of his time pottering about his parish on his bicycle, solving crimes, mostly murders. If you add up the cadavers, Kembleford is an exceedingly dangerous place to live.

But what interested fbb more than most episodes was an story set at Kembleford Railway Station. There is a station sign on-line ... 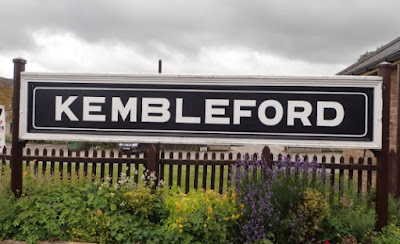 ... with a very inappropriate type face. And there was not enough of it to even guess the location of the railway shots in this particular episode. Even if fbb had tried, he would have been wrong as this sign was from an earlier story at a different location.

The story that provoked this blog concerned a randy station master with a prickly wife. She won prizes for her hanging baskets which she was tending in the opening shots. 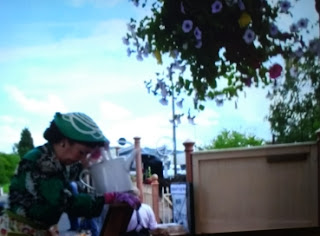 But the first pictures were of a train crossing a viaduct and entering the station. 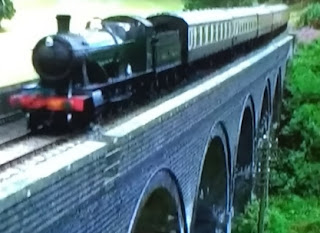 The viaduct is easy to identify (?) as that at Stanway on the Gloucestershire and Warwickshire Steam Railway (GWSR), a line which fbb has never visited. The line starts at Cheltenham Racecourse station and runs north ... 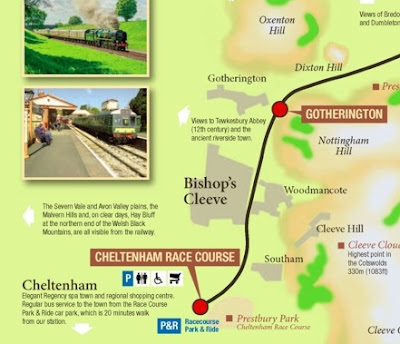 ... to Gotherington; turns east to Winchcombe ... 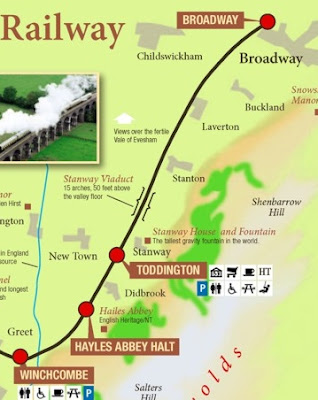 ... then north again to Toddington, A new station is being built at Broadway. 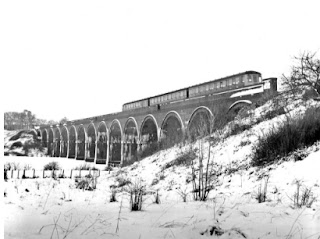 The loco confirms the viaduct's identity ... 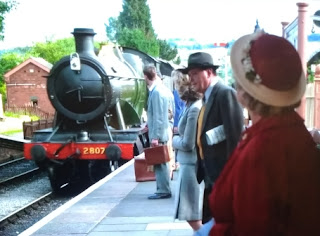 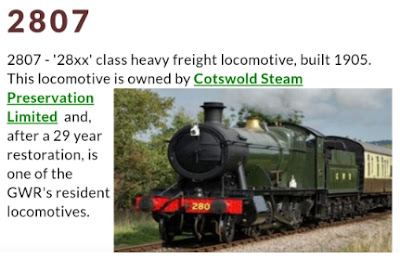 But which station? TV producers have a delightful knack of filming parts of a story at one location and other bits of the same narrative elsewhere.

The gist of the story was that the station was due to close so a fete worse than death was held at "the station" to spearhead a "keep it open" campaign.

It was during this jollification that the station masted met his unfortunate end at the hands of XXXXXXXX   ! But which station?

Easy peasy. Look at the timber construction by the phone box. This is the "decency screen" for the gents "facilities" and is a distinctive feature of the real station. 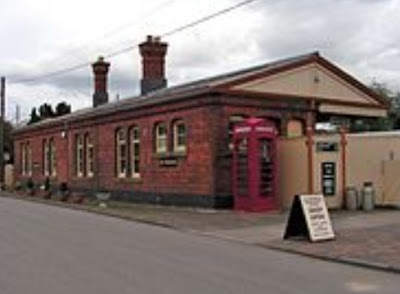 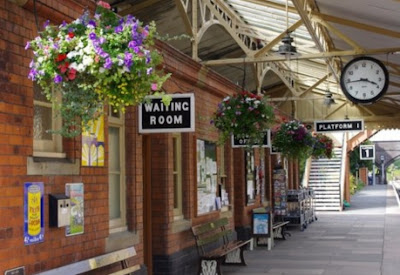 ... famous in real life for its gorgeous hanging baskets. 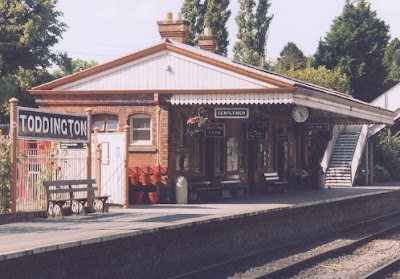 An "inspector" has arrived with a poster announcing the closure and he is accused (wrongly, of course) of the murder.

There is a plot incident involving the later deaded station master's model railway ... 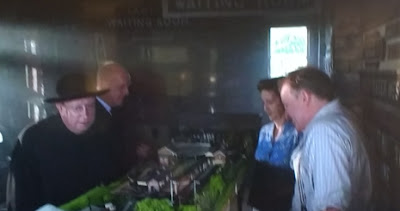 ... in a gloomy shed with a "Kemble" hot dog station sign on the wall.

fbb tried hard to identify the model; as a parsimonious BBC would not countenance building one specifically for the episode!

Was it, indeed, this exhibition model of Toddington Station (slightly disguised)? 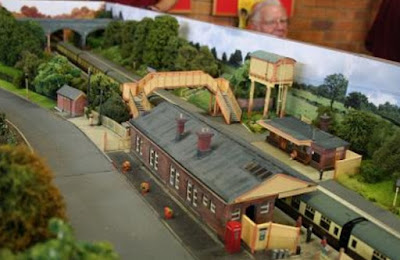 The next suspect is the gruff and boorish owner of the bus company (aren't they all?) who stands to benefit mightily from the closure. He operates from Kembleford "bus station" (highly unlikely concept) and locks Father Brown in a station building and sets light to it. 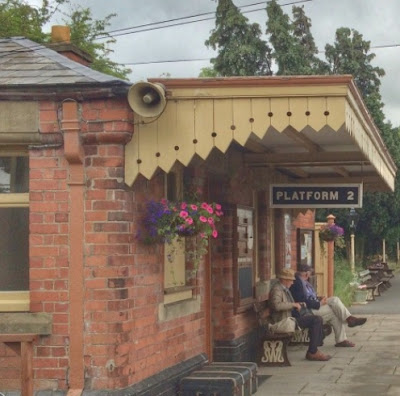 the Rev escapes just in time (obviously) by calling for help over the station "tannoy", despite the fact that the station is closed "because it is a bank holiday"!

The bus boss hopes that the conflagration will hasten the demise of he line and confirm his rich financial future. (The writers simply didn't understand the decline of the bus industry from the mid fifties onwards.)

And it turns out, in an unrealistic "deus ex machina", that the bus company has gone bust.

The murderer is unmasked, the murder weapon is identified; both previous suspects are released; AND, because the bus company has failed, there can be no rail replacement service so ...

... to much joy and delight, the station closure is cancelled and all ends happily every after.

Totally nuts, but it is only a story and most Father Brown tales end with the baddie or baddies "banged to rights" and the Reverend enjoying  nice cup of tea and some of Mrs McCarthy's strawberry scones. 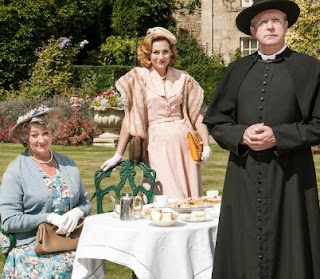 Not quite EastEnders but enjoyable all the same.

The "earlier story" by the way, involved Winchcombe Station, also on the GWSR.

The latest series ended yesterday but is available on iPlayer.

Next catch-up blog : Sunday 14th January
Posted by fatbusbloke at 02:00