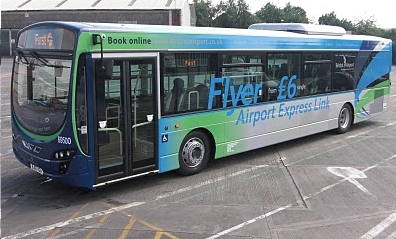 A recent development of First's every 10 minute service from Bristol to its eponymous and international airport has been the use of these appropriately bus bodied vehicles replacing step entrance "luxury" bodied coaches. The fare is now £7, by the way!

And in case some of our clever readers wonder why the newer vehicle is showing the old fare, the low floor vehicles were introduced in two stages from 2011 (when the fare was £6!). The second batch replaced coaches by which time the fare had increased to £7. Bet you're glad that's sorted out?


The PR "spin" is that users prefer the low floor body as it is easier to board with luggage.


First Bristol is using new low-floor buses to replace coaches on the Bristol Airport Flyer service, which links the airport with the city centre. Tony McNiff, the company’s managing director, says: “Research has shown that passengers using airport flyer services prefer easy step-free entrances and the security of on-board luggage racks over the current arrangement that they have on coaches.” [Press report from 2011]


Did users have a choice? Or are the buses cheaper to buy and run? Cynical, moi? 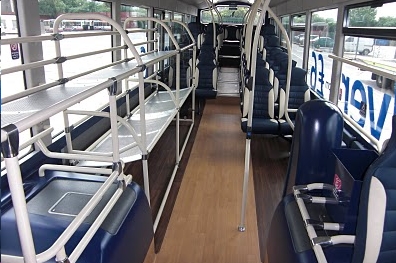 First's web site includes an excellent map of the route and the various stops in the City ... 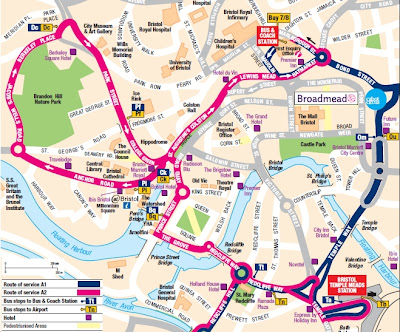 ... and here is where the problems begin. The pink line is the mysterious A2 which serves additional hotels in the City and loops via "Clifton Triangle" (which isn't really in Clifton!) to provide a service  for the University and, via a short walk, the BBC.

So, brave as ever, let us look up the times for the A2 on First's Bristol web site ... 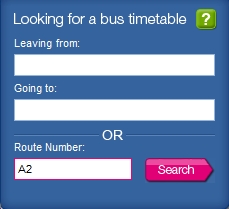 ... there isn't one! No such service; First does not run an A2; anywhere in Bristol. And certainly not from Clifton. 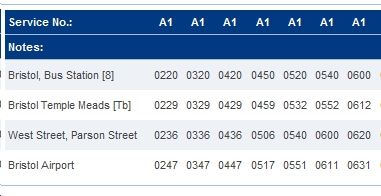 Same on Traveline's timetable; no buses from Clifton to the Airport.

Has the A2 been withdrawn? Do you have to be in possession of some secret code? Has fbb gone of his trolley yet again?

No; it is, as usual, the mindless appplication of misplaced technology to public transport information delivery. It's a loop, innit? And confuser systems don't like loops, do they? So traveline, for example provides us with a one way route FROM the Airport to Bristol but VIA Clifton. 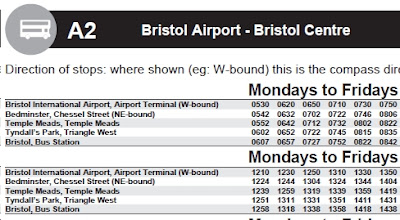 There are no A2s from Clifton Triangle to the Airport!

Of course, being Traveline, it has to use a different name for The Triangle. In fact "Tyndalls Park" is probably a better district name than Clifton; but, alas, it's not what the locals would say, m'dear. Because of the way the datal (sic**) is managed you have to catch an A2 to the bus station and then "change" to an A1. Except you don't - change that is!

The answer is provided, ironically, not by First or by Traveline but by Bristol International Airport. Their timetable actually makes sense. Here is an fbb recreated extract.

It really is that simple. Just to add to the complication, First do suggest that "when coming from Clifton, it may be possible to catch an earlier A1 from the bus station." Indeed. The 1011 from Clifton, for example, arrives at the bus station at 1018 and goes forward at 1030; but you could nip off and catch the 1020!

** Bristolians have a habit of adding an "l" sound to certain words, hence "datal". For such a speaker, a dival might sing an arial about her pet pandal in act one of the operal.

The timetable information may be poor, but what is really good about the A1 (or is it the A2?) is that it is a virtual train. Although the National Rail timetable largely ignores it (except in a brief note), through ticketting is available from anywhere on the rail network and the service appears via the National Rail journey planner ...

So, if you know the right place to look, you can buy a through ticket, pop just outside the station, ignoring the fact that National Rail has the station exit  E  in the wrong place ... 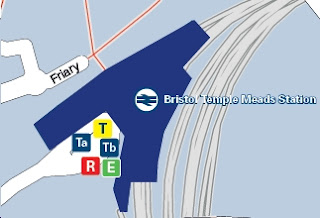 ... and there will be your chauffeur driven ride to the Airport. 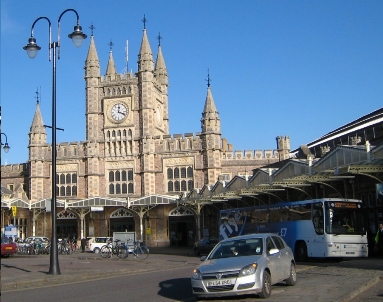 For the benefit of National Rail's web site people, the station exit is under the Tower where the  T  is on the diagram.

But expansion and change are on the way. Tomorrow we look at some of the developments, real and proposed, for public transport to the airport. Particulièrement pour les résidents de Paris.


Next Bus Blog : Monday 18th February
Posted by fatbusbloke at 02:00