At least these people were scheduled to be ...


WHAT
"Make Fares Fair" are holding a peaceful demonstration outside Bristol Bus station to show our displeasure with First Bus fares and service. Local Tory MP Charlotte Leslie will be present 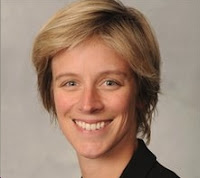 along with Mark Bradshaw (Labour Co-op Councillor for Bedminster), 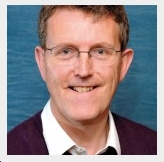 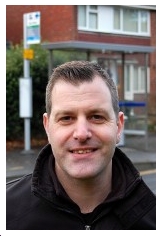 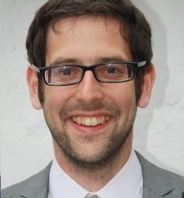 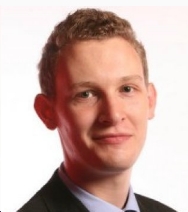 amongst others.** Did they all turn up?
WHERE
Bristol Bus Station, Whitson Street (outside the front entrance to the Coach Station, Bristol.
WHEN
12:00 on Saturday 2nd of February.

The main revolting man and thus the co-ordinator of the "demo" is Daniel Farr. 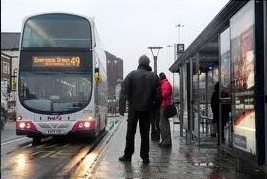 A Bristol bus user has set up an online petition on the government’s website complaining about the fares charged by First Bus. Daniel Farr’s petition notes: “The prices of First group’s bus tickets in Bristol and the quality of their service do not match up. Their fares are the most expensive outside of London, but yet their buses are unreliable and often late. Local government does nothing to improve the service or lower the prices so we call on the government to force First to reduce their charges.”

Leaving aside the seemingly unimportant fact the the Government cannot "force" First Bus to reduce their charges, the petition has gained about 3,000 signatures. The population of greater Bristol is about 500,000 so just over half a percent of the city's burghers care enough to sign an e-petition. But most of us are lethargic when it comes to "speaking up". It's all too much trouble.

** And how many of that list of Bristol glitterati are regular users of First's buses?

First Bus have been quick to respond, however (and in an identical style of press release to that from Daniel Farr) ... 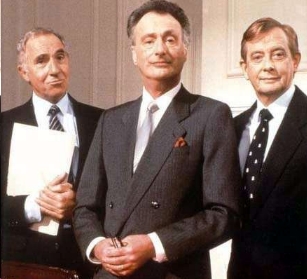 ... his nemesis Sir Humphrey was always ready to oblige; by setting up an Internal Enquiry. As he explained to his underlings, "That will delay any possible decision; by which time the Minster/PM will have found something else to worry about." 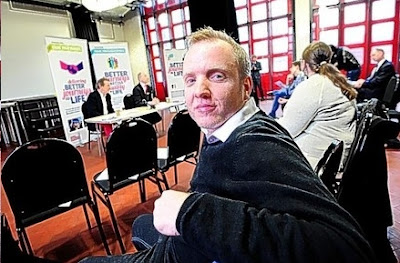 And here is Daniel Farr sitting amongst the interested crowds (?) at last Tuesday's press conference.

And here are some pictures of yesterday's demo, as promised by the organisers. Erm, well ... nothing had arrived by 2230 last night so there's only this one of the crowds outside the bus station from ITV's web pages, as posted yesterday at 1700 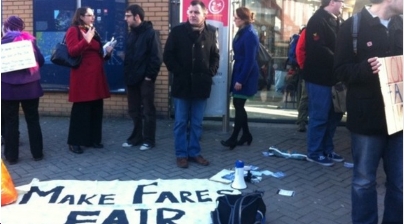 fbb will add more when (if?) received. The full ITV report is (here). Didn't look like a huge turnout?

So are Daniel and his political wannabe chums right? Are Bristol's fares higher than elsewhere? It is almost impossible to obtain details of individual single point-to-point fares but First does publish its "season ticket" prices. Here is a league table of "First Day" tickets. Obviously boundaries and areas covered are different but this is what you might choose to pay if you were making at least three or four single journeys in any one day.

So, for this sort of ticket at least, Bristol is below the "half way mark" and 20% cheaper that the price for smaller networks in Ipswich or Stoke. 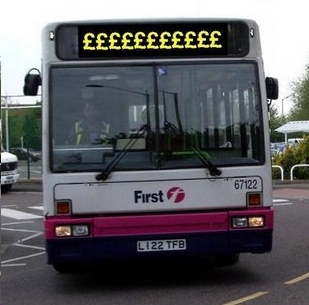 Talking about the company’s plans, Justin Davies, regional managing director for First in the South West and Wales, says: “We are aware that the issue of fares in Bristol has often been a contentious one with a perception that the cost of travel here is significantly higher than elsewhere. This is frustrating for everyone and is something we have wished to tackle for some time.

We want to heighten awareness about the industry and allow people to better understand the economics of running buses and the cost pressures we face. In return we want to hear from the public and their representatives, in particular what they think we could do differently to both attract more people on to buses and deliver the best possible value for money for our customers.

This is why we are launching this review and consultation and we hope that as many people as possible will let us have their views.

A couple of flyers distributed by First Bus in connection with yesterday's protest can be viewed (here) and (here). 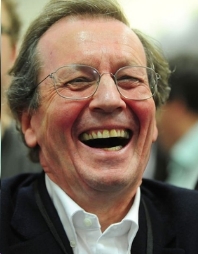 Well, the Mayor (The Man in the Red Trousers) has signed the petition, so the "big guns" are on the case. More Bristol Blogs seem likely.


Next Bus Blog : Monday 4th February
Posted by fatbusbloke at 02:00