Apart from schools business (when it returns) and staff travel contracts with large employers, the coaching industry has fallen between several stools as the effects of the Virus have begun to be felt. Coach day trips are not "essential travel" and social distancing means you cannot carty enough passengers to make money.

A few day trips arrive in Seaton from time to time unloading not more than a couple of handfuls of customers eager to explore the town and take a stroll along the prom. The concern in the industry was really highlighted with the total collapse of the group that included Shearings.

Is this news from Brighton positive? Or is it a hopeful defence against a difficult future? 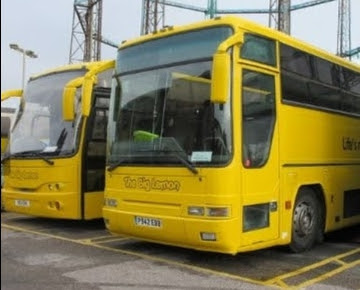 ... has merged its coach "unit" with that of near neighbour Seaford and District. 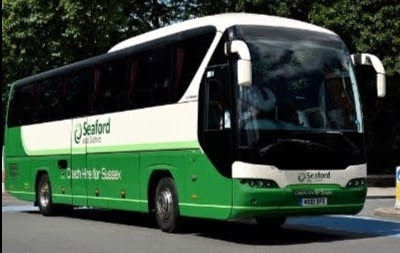 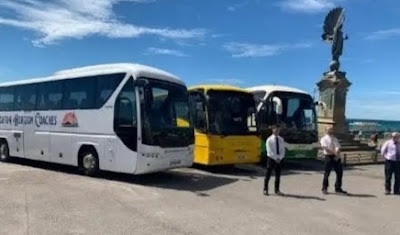 The new outfit has a Brightonian logo ... 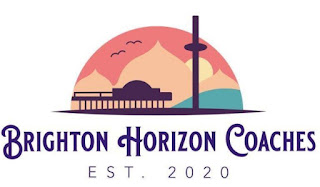 ... and, in case you wondered, it is not a Christian symbol but the British Airways i360 Viewing Tower. 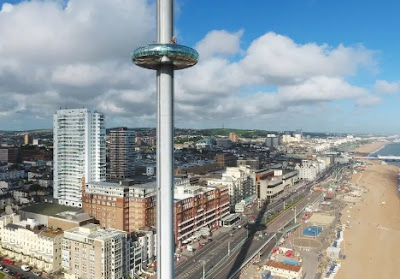 It must be technologically advanced, it has an "i" in its name! 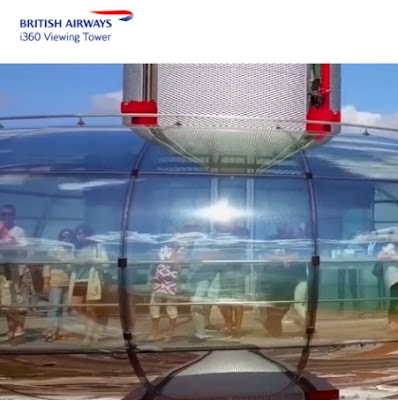 Currently turn up and ride tickets are not available ... 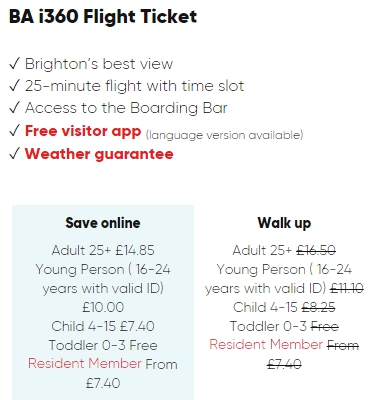 ... but they do offer a "weather guarantee".

With our Weather Guarantee, if we declare poor visibility status during the time of your visit, we will give you a complimentary return ticket to be used within three months.

Our Guest Experience team will let you know on the day of your visit if we are experiencing poor visibility status and will arrange your return ticket. 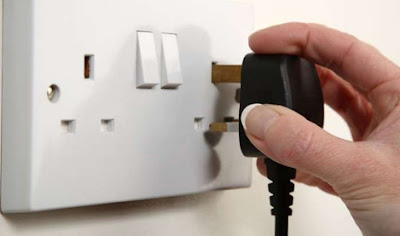 As we are being encouraged to rush headlong into electric vehicles, and, ironically, as First unveils their new double deck Park and Ride buses for the City of York, North Yorkshire County is getting worried. 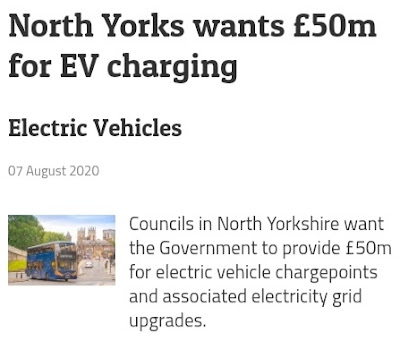 Somehow, fbb doesn't think HMG will be rushing to give all the county coucils a wad of fivers for charging points yet awhile. 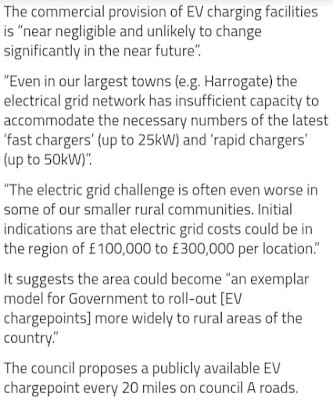 And then where will HMG put all the power stations needed to generate the juice. And how will they be paid for? (see Hinkley Point C).

Instead of a Viral crisis, we might face power cuts and lights out lockdowns as the planners fail to make enough electricity for all the shiny new vehicles. 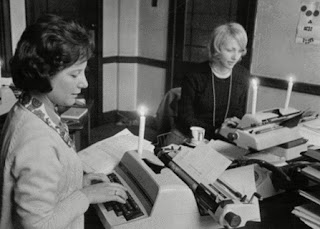 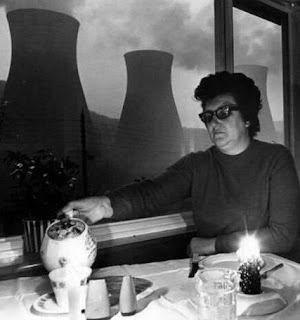 You would struggle with office work by candle now!

Something Old, Something New
Something Borrowed, Something Blue
In one of the more unusual public transport policies, Diamond Bus North West (Rotala Group) have acquired an open top bus. Now open top tours are not a major feature of recent bus History in Bolton but ... 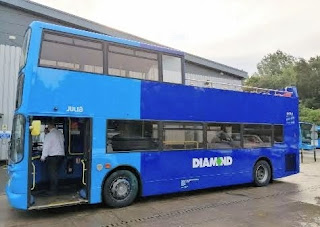 Most recently the bus has been part-topless with City Bus in London ... 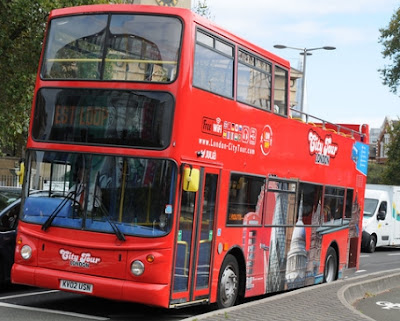 ... and before that, fully roofed with Geldards of Leeds ... 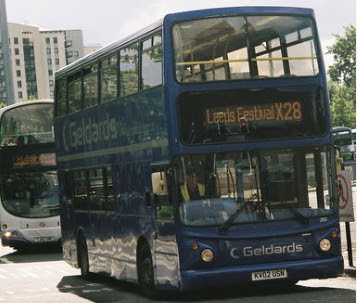 ... and a short spell on loan to Tyrer Tours. 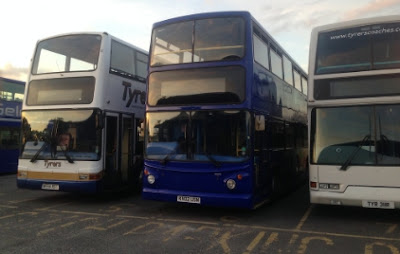 Before its first sojourn up north it was a bog standard Dennis Trident with London Buses. But with which company? Some on-line articles say it was T96 (fleet number) which went new to Stagecoach; but others offer the short lived Connex as first owner. 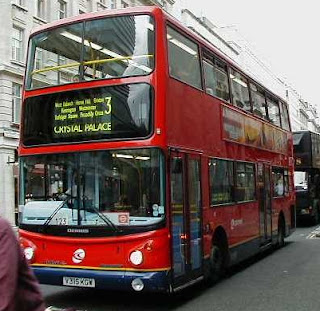 Maybe somebody can sort the old man out!

Diamond Bus were keen to introduce  Julià to the burgers of Bolton, so made this offer "on-tweet". 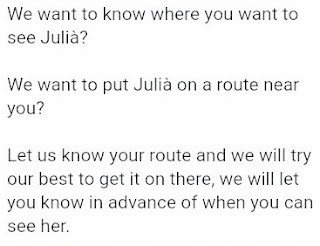 Book your very own open-top ride. But somehow Julià didn't look quite right. Then all was revealed. Her first trip was on route 8 from Shude Hill bus station in Manchester ...

... where, complete with Diamond diamonds, she look loads better. 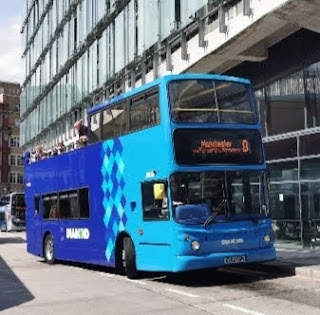 Have a chocolate peanut, Diamond.

Fortunately Bolton has moved on from the days of William Blake. 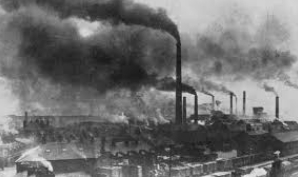 And did that bus in ancient times,
Tour around London's parklands green?
And was that Connex Trident bus
By London's flowing river seen?

Now does its toplessness divine,
Shine forth on Bolton's cloudless hills?
And was our Julià scheduled here
Among these residential mills?

Book me a bus of Diamond blue:
Take me wherever I may state:
Book me my bus: all bright and new!
Bring me my open-topped route 8.

I will not cease from mental fight,
Nor shall my fare sleep in my hand
Till I have seen this bus delight
In Bolton's green and pleasant land. 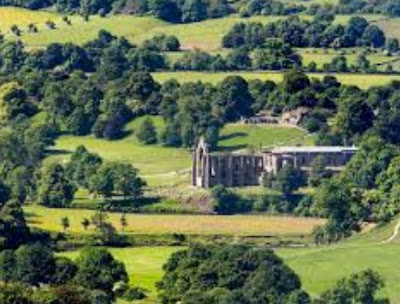 Martijn Is Excited ...
He was excited when he was business manager of Tiger Buses (Arriva in a stripey skin).

He was often very excited when he was boss of Reading Buses. 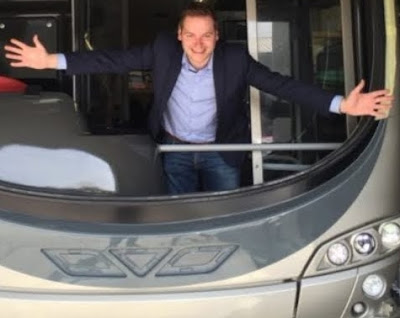 Now at GoNorthEast he was, maybe not over excited, but very pleased indeed to present a long service award. 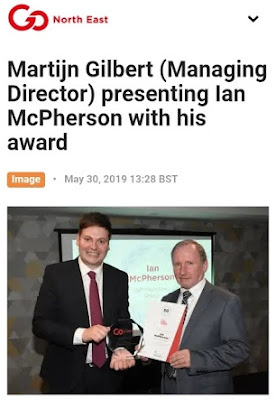 Blog readers will have to wait and see what it is. But it is, surely, SUPER exciting.

Topic Pending for the next blog : Tuesday 11th August
Posted by fatbusbloke at 02:00