Some surprise was expressed by bus watchers when Hulleys of Baslow announced their X71 bus service way back in BC times. The post viral route was scaled down quite significantly, with its main destination being Alton Towers. 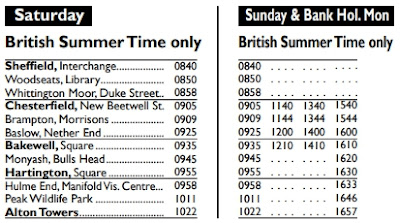 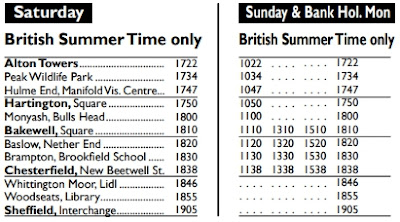 The Bakewell "shorts" would be numbered X70 on most days and, as another Hulleys innovation, form faster journeys between the two Derbyshire towns, significantly nippier than the pre-exisiting 170. Note that the X70 runs from Chesterfield Station - another "good idea" from the new owners of Hulleys.

The general on-line presentation of the X71 is good with attractive illustrations on the web site ... 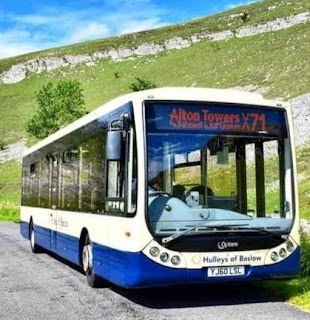 ... smart vehicles asnd something a little "different" on the blind. 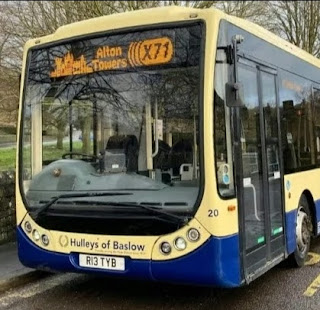 Young Gavin, who does Hulley's computer "stuff" has had a jolly good "go" at reproducing Alton Towers logo ... 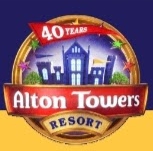 ... in an orange-yellow dotty display. 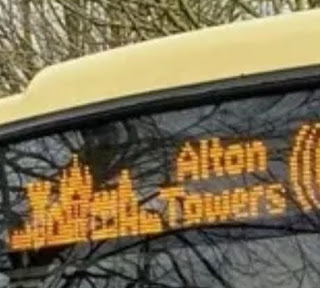 In turn, the logo is a happy but simplified version of Alton Towers (the Grand House) itself. 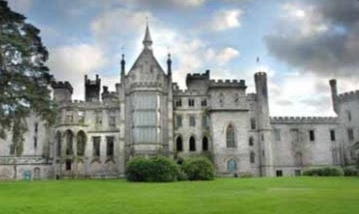 So it was that, on Saturday 1st August, Sheffield correspondent Roy was mooching round a near deserted Sheffield Interchange when he observed the departure to Alton Towers.

15 persons boarded, which with en route and Chesterfield additions, seems a good start to what must be described as a "courageous" commercial venture in these *npr*c*d*nt*d times.

There is, as our readers may know, a campaign to ban the use of the word *npr*c*d*nt*d and bring in Government legislation to fine writers for its (over) use. fbb must be careful.

But what DO we know of the present-day Alton Towers, the second most visited Therme Patk in the UK? (the No 1 slot is held by Legoland at Windsor)

In fact the park's more recent history has been somewhat complex as a business.

After millionaire property developer John Broome married the daughter of majority shareholder Denis Bagshaw in 1973, he bought out the controlling stake in Alton Towers. Over the next few years, he laid the foundation for the modern theme park by installing various permanent rides and developing areas of the grounds in progressive stages.

Alton Towers began its evolution into a major theme park in 1980 with the installation of The Corkscrew rollercoaster ... 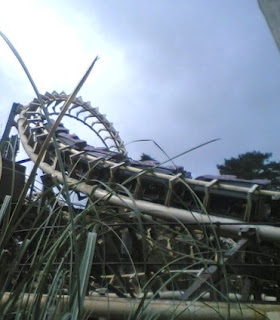 ... the Pirate Ship, and the Alpine Bob sled ride.

In 1984, the park's second roller-coaster, The Black Hole, arrived. 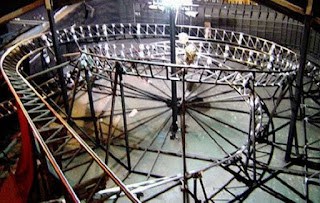 Throughout the 1980s and beyond, more attractions, areas and rides were added to Alton Towers.

John Broome had to sell to offset some of his losses on the abortive development of Battersea Power Station. 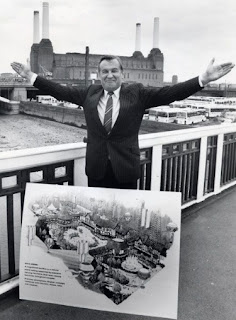 Part of the "promo" included a "Battersea Bullet" train from a dedicated platform at London Victoria. 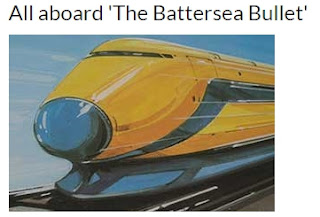 Despite the "way out" pictures, the trains would have been fairly conventional but blacked out with sounds and projected visuals to simulate a "space age" ride. Broome lost pretty much everything he had on the Battersea project.

In 1990, the Alton Towers was purchased by The Tussauds Group. The change of ownership heralded an era of intense development, with a range of large attractions and new areas being built at the park, including the dark rides The Haunted House (1992) and Toyland Tours (1994), thrill rides such as Nemesis (1994), a hotel complex in 1996, Oblivion (1998), and Air (now known as Galactica) (2002). 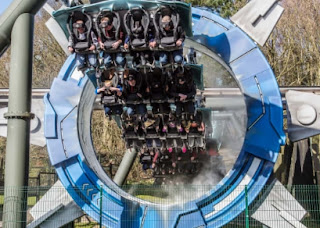 In 2005, the Park was acquired by the investment group Dubai International Capital (DIC) when it purchased Tussauds for £800 million. The Tussauds Group was bought by Merlin Entertainments in March 2007 for over £1 billion from DIC, placing Alton Towers under their control. In July 2007, the resort and park was sold to Nick Leslau ... 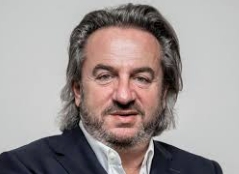 ... and his investment firm Prestbury, who now lease the park back to Merlin Entertainments to operate on a 35-year lease.

It's almost as convoluted as some of the post privatisation bus industry dealings!

But for Trains and flowers we need to go back a bit further. 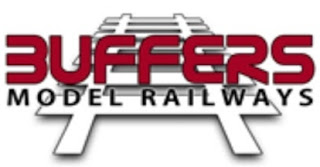 Just outside Axminster is a small model emporium located in an old filling station. 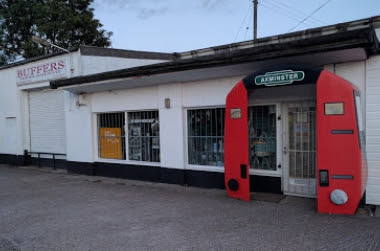 It was where fbb began his Seaton-based modelling project. 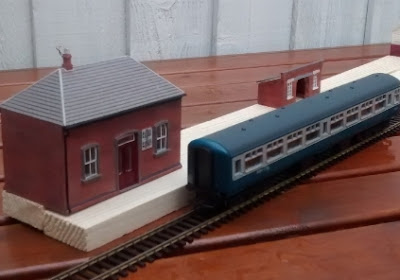 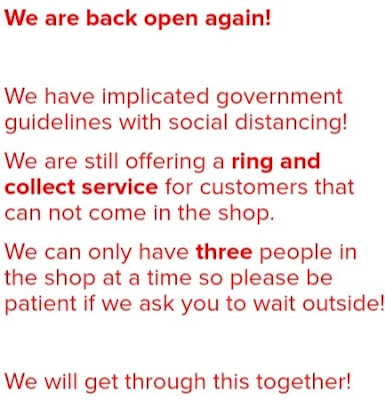 Maybe better at model railways than English grammar and syntax? 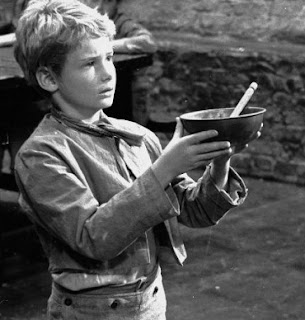 Not only does this county want HMG to pay for charging points every 20 miles along the county's A roads, but in addition ...

Another £45 million -  a snip, to reduce pollution from buses (what buses?) which we all know is such a huge problem in the county. 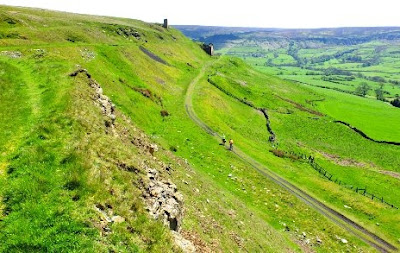 Maybe they should also ask HMG for funds to electrify the North York Moors Railway? 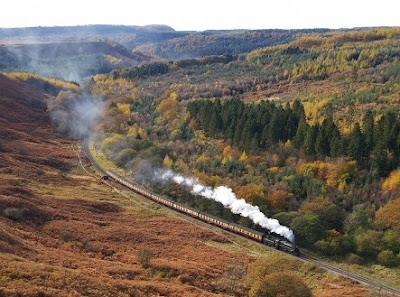 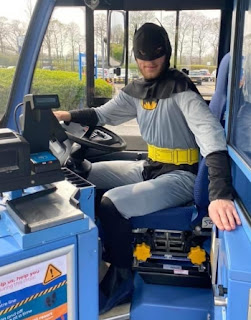 ... about Dylan and others dressing up last Easter. 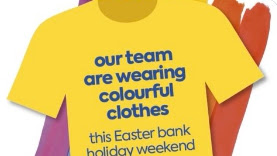