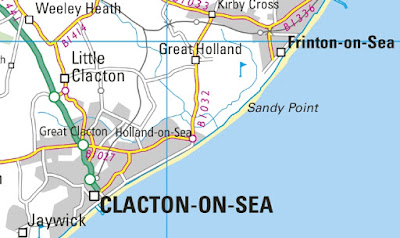 It used to be said that the more "refaned" holiday makers would sojourn at Frinton-on-Sea ... 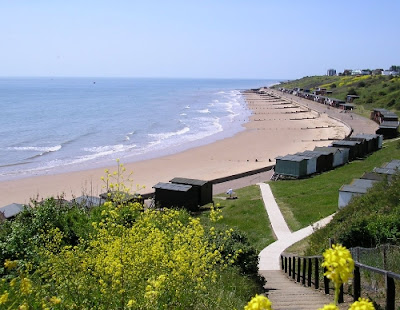 ... where, according to reputation, there were no pubs. Technically true - but there were bars in hotels and at the goff club! But in year 2000 the "Lock and Barrel" opened. Shock horror. 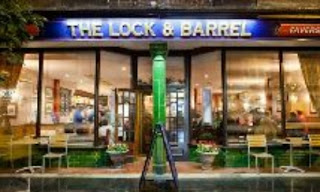 Meanwhile, the "lower orders" would enjoy a knees-up at Clacton ... 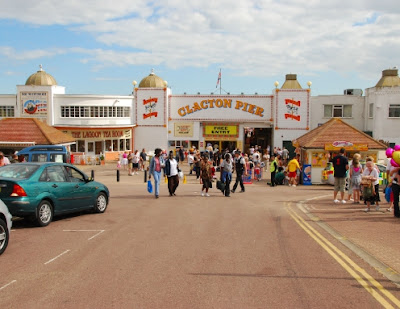 ... where there is an adequate sufficiency of licensed premises.

It is not true to say that, on 29th July, First Bus handed over all its Clacton local services to GoAhead's Hedingham and District.

Just most of them. What remains with First is former service 7 and 8 to Frinton and Walton on the Naze. (And there it is, "The Naze", a sticky-out bit north of Walton). 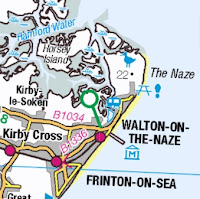 Thanks to a comment writer, fbb has been able to find the new map and new network booklet on-line, but correspondent Keith had previously explained all. Ta muchly!

Hitherto, there were two buses every hour between Colchester and Clacton, numbered 74 (74A on Sundays) and 76A (but plain 76 on Sundays). From 29th July this has been increased to three buses an hour, viz 97, 97A and 98. 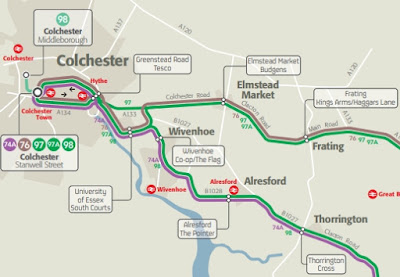 These are extended across Clacton to Walton replacing the 7 and 8. 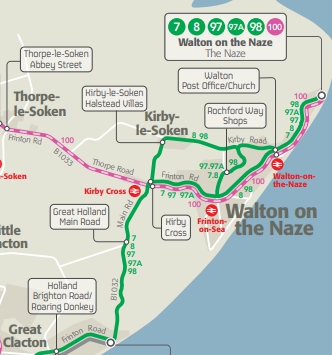 So why, on these new maps, do we still have 7, 8, 74A and 76? Again Keith comes to the rescue and then asks a pertinent question.

The "old" numbers refer to evening and Sunday journeys tendered by Essex County Council, but as Keith argues, surely these journeys should carry numbers appropriate to the new network? Presumably, fbb surmises, it would mean issuing new tenders, cancelling the old and a huge amount of hassle all round.

Or Essex could have agreed with First that the numbers should be changed, notwithstanding!

Far too simple. It is far more important to keep the paperwork right than it is to help the befuddled passenger.

Service 1  St Osyth Beach
This is, fbb presumes, a summer season service, terminating at caravan and chalet camp sites on the coast beyond the village of St Osyth. 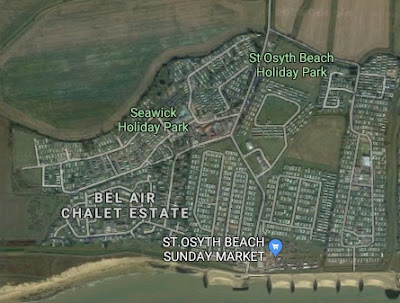 Being seasonal, it doesn't appear in First's February booklet and fbb awaits the help of his many correspondents to cover its history. Once it was Eastern National service 100! 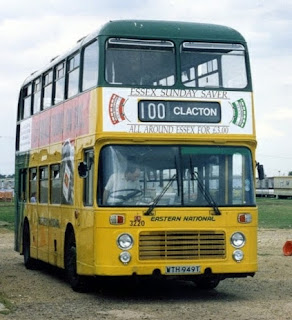 Service 2  Mistley
This was run by First on tender and is now operated by Panther Travel. 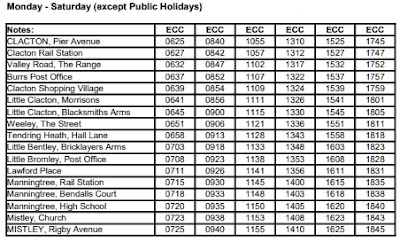 The company operates coaches and a number of other tendered services as well as acquiring the Clacton 2 from the end of July. 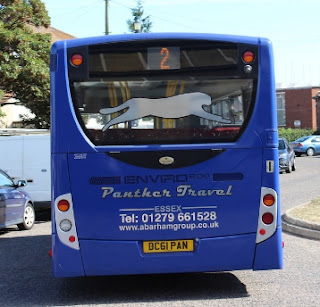 Service 3  Harwich
This is the first Hedingham absorbtion from First. Hedinham are running much the same timetable as First at not quite an hourly frequency, every two hours on Sunday. 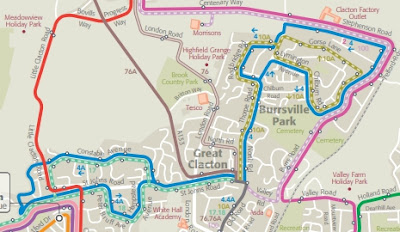 ... at which point the 4 and 4A bifurcate (oooh, nasty!) whizzing off in different directions. The timetable is a bit of a challenge ... ... and would have been better split up and shown in the two different directions. But no doubt what was printed was what was on the confuser, so thus it had to be - confusing.

Hedingham's version is different. At the Jaywich end it is combined with journeys on their X76 which existed before the First withdrawal. There are still four buses an hour to Jaywick, but the timetable is less easy to follow. 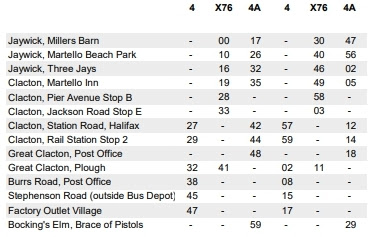 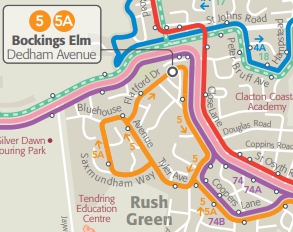 First's timetable was unhelpfully presented (that danged confuser again?) with no timings shown for the 5A variant on the way back to town. 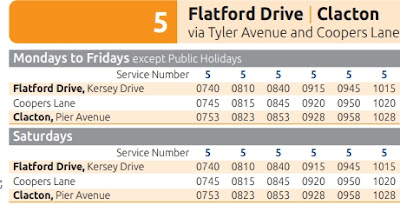 Full marks to Hedingham for getting it right! 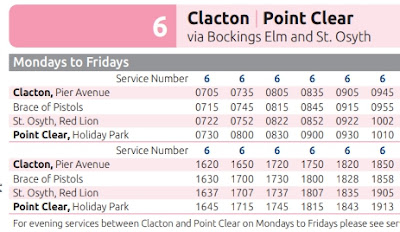 A small community dominated by yet another Chalet park ... 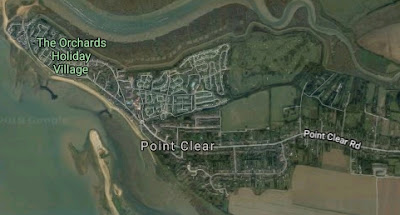 ... it lies across an inlet from Brightlingsea. There is a ferry ... 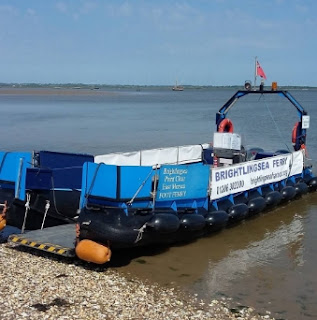 ... with a bit of tweaking and a slightly revised timetable from 2nd September.

But there is one significant difference between Hedingham's network and that which it replaced. At school times the service often collapses as Hedingham's buses bumble off to carry loads of happy schoolkiddies. Service 4 and 4A is an extreme example/

Each yellow panel is a part of the full service which doesn't run at school times.

fbb does wonder whether this is a good business plan long term. Does Mrs Miggins of Great Clacton find it easy to remember (a) whether he bus will run and (b) when school terms actually are? There were no such incursions to the regular pattern when First Bus was in charge.

But this "event" begs a serious question. First has a predilection for backing out of anything that does not make an "appropriate return" i.e. it makes less than a proper profit (however that might be defined). So what magic might Hedingham have that can change this around? Are they going to be able to attract additional "bums on seats? 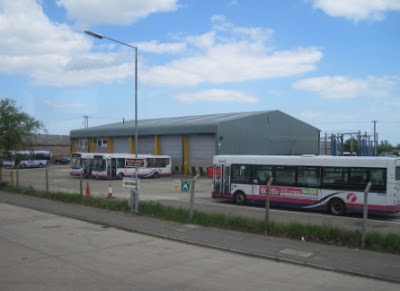 Others might suggest that Clacton's new-ish depot put too high a burden on the fragile town network so both had to go. The reduced First Bus scheme is worked from Colchester.

Hedingham's HQ is a Tollesbury ...

Have Hedingam matched this quality?

Or maybe we will see a noticeable trimming from the new management in the very near future?

Talking of a Hedingham trim ...